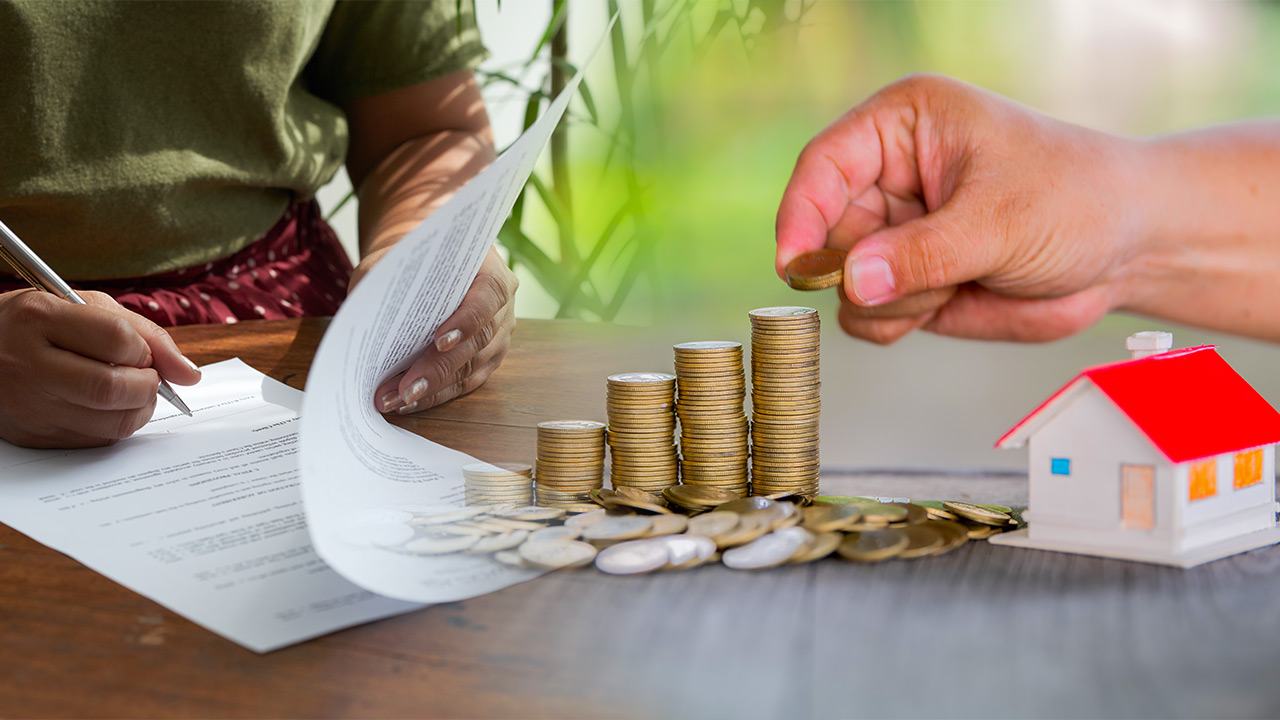 California has given out $2.7 billion in rental aid yet thousands of renters and landlords still await help and are struggling to stay afloat. (GV Wire/Paul Marshall)
Share with friends

Despite the $2.7 billion in COVID-19 relief funding distributed to keep California tenants from being evicted, both renters and landlords restlessly await state assistance.

For example, Fresno mom-and-pop landlord Mark Abbott applied for COVID relief funding in 2021 but says he has yet to receive a single check and is struggling to stay afloat.

Abbott, who is semi-retired, sold his family raisin farm and used the profits to buy two Fresno residential homes that he depends on for income.

He said one of his renters paid throughout the pandemic. However, a tenant who had been co-sharing moved out, and the remaining tenant couldn’t make rent.

With eviction protections in place throughout most of 2020-2021, Abbott couldn’t evict the tenant for non-payment and instead opted to apply for COVID rental relief.

“I said, OK, fine, I’ll go ahead along with the COVID relief and I’ll get my money from the state when it’s time,” said Abbott.

Landlords Say They Are Struggling to Stay Afloat

Abbott says he has lost a little over $17,000 in income and is taking on small jobs to make ends meet.

“I don’t have a mortgage on them (the rental homes), so I’m not like some of the other people out there that were relying on those rental payments to pay their mortgage,” said Abbott. “But I still have to pay my property taxes … and I still have to buy food, which is going up. … I’m only picking up from local farmers around here, and I’ll help them out for some little extra cash.”

Abbott says he pays $6,000 in property taxes annually for each of his rental homes. This year, he had to pay an additional $10,000 in repairs for property damage.

A recent report published by the Housing Initiative at Penn surveyed 1,300 landlords in the city of Los Angeles who applied for emergency assistance in 2020. The survey indicated that 80% of landlords struggled with their rental business due to lost rent.

Furthermore, data showed that mom-and-pop landlords struggled a lot more than corporate landlords. According to the HIP survey, many mom-and-pops said that they could withstand fewer than three months without collecting rent. Meanwhile, large owners were most likely to say they could last more than 12 months.

Similarly, a recent report by the National Equity Atlas states that renters who were approved by the state for funding have yet to receive any assistance.

While billions of federal dollars in rent for both landlords and tenants have started to trickle in, it’s unclear whether California will have enough funding for everyone.

Only 16% of nearly half a million renters who applied for rent relief from the state have been paid, stated the report.

“It’s premature in this moment to know if we are over-subscribed because we don’t know how much more funding we will receive,” Geoffrey Ross, deputy director of the state department of housing and community development, told Mercury News.

How Many Tenants and Landlords Have Received Funding in Fresno?

Chris Montelongo, deputy chief of staff for Fresno Mayor Jerry Dyer, says the city has distributed $2 million in aid every month since it received $67 million in emergency rental assistance from the state.

The city’s figures show that it has sent out $24.3 million in rental assistance, $2.3 million for help with utility bills, and $1.5 million in housing stability services.

More than 37,000 applications have been received and about 30,000 have been approved. So far, more than 1,400 households have been funded, said Montelongo, with a vast majority being landlords in combination with tenants.

Montelongo explained that an application is only considered if both the tenant and landlord apply from the same address. Those applications are then counted as a single household. 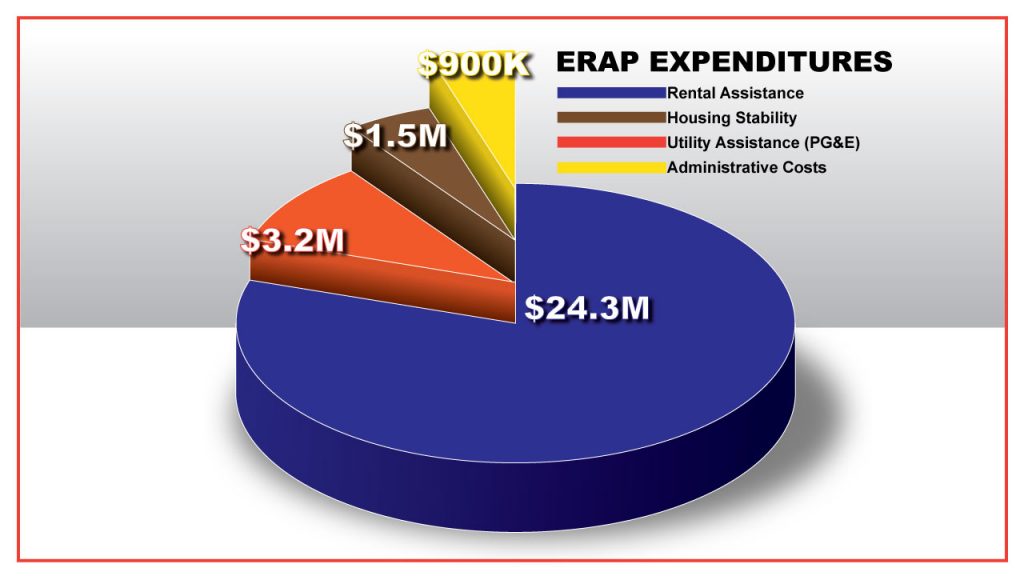 According to the city of Fresno, as of March 2022, it had distributed $24.3 million in rental assistance, $2.3 million for help with utility bills, and $1.5 million in housing stability services. (GV Wire Composite/Paul Marshall)

“Less than 3,000 landlords are still in the process of either being vetted and those applications are being reviewed or these are only applications where only the landlord has applied,” said Montelongo.

“I think people were a little bit worried that they couldn’t apply anymore, so we did get a rush of applications last minute, but we are reassuring the public that there’s still funding available and you still have the ability to apply.”

The county of Fresno has issued $22.8 million to 2,251 households out of the 3,460 approved applications, said Sonia De La Rosa, the program administrator for the county.

In total, 13,269 total applications have been started between landlords and renters under the county’s program.

At the beginning of the pandemic, California received $5.2 billion in federal funds to establish the rent relief program.

Then, in January 2022, the state got $62 million more in federal aid, according to CalMatters — just 3% of California’s request.

In total, more than $2.7 billion in COVID-19 relief funds have been given out to California landlords and renters who faced financial hardships from the pandemic.

However, these numbers do not represent the entire state as jurisdictions like the city of Fresno and Fresno County opted to oversee their own programs instead of participating in the state program.

The state had set an expiration date for the eviction moratorium to end on March 31. However, hours before the deadline, Lt. Gov. Eleni Kounalakis signed a law to extend protections.

Californians with a pending application for ERAP funding will have until June 30, after which eviction protections will expire.

With tens of thousands of pending applications, it would have been impossible for the state to process all of those before the deadline — meaning households still waiting to get the money could have been evicted beginning April 1.

California’s nation-leading rent relief program has provided much needed relief for more than 220,000 households across the state. Today’s action will provide additional time to thousands more who are in the process of acquiring emergency relief.

“We’re not going to allow for Californians to suffer, to lose their homes or even their income because of application processing times,” said Assemblymember Tim Grayson, a Democrat from Concord who introduced the bill.

As for renters inside Fresno’s city limits, protections and rent relief assistance will remain for as long as the pandemic emergency declaration is in place, said Montelongo, or once the city’s $67 million in funding runs out.

However, there are those who say the time for helping renters should be over.

“It’s been two years. There is no need for any local laws that give tenants another year of free rent,” said Carlton. “(The) unemployment rate is back to ‘normal’ so what’s the issue?”