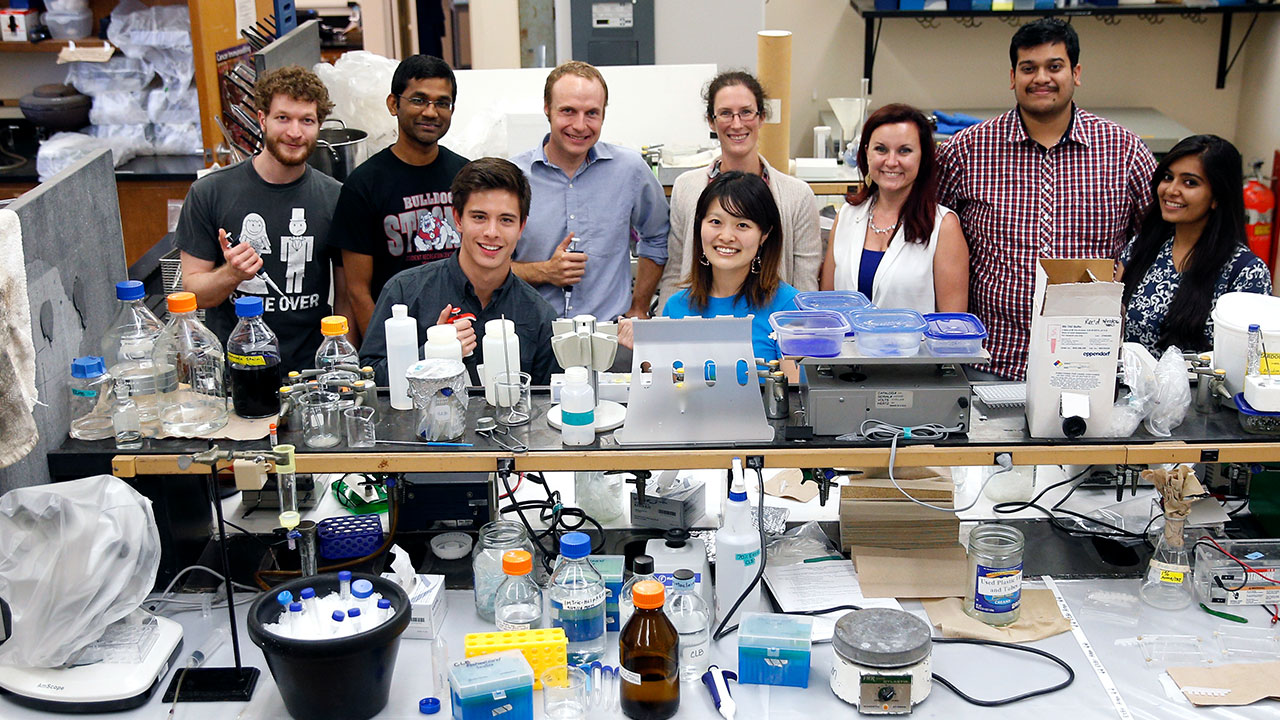 In the U.S., 19,880 women will be diagnosed with ovarian cancer this year and 12,880 will die fighting it, according to the American Cancer Society.

Unfortunately, ovarian cancer is hard to detect and is often diagnosed after the cancer has spread, making it difficult to treat with methods used to fight other cancers.

However, new breakthrough research shows there is hope.

Brooks, who teaches in the department of chemistry and biochemistry at Fresno State, received a $400,000 research grant from the National Institutes of Health to study new antibody treatments for the next three years.

Brooks and his team of grad students are in the second year of their research grant. But, by demonstrating progress, the grant could be renewed for another three years.

With high-tech help from the University of Saskatchewan’s CMCF beamline at the Canadian Light Source, Brooks and his team are studying how antibodies can be used to fight ovarian cancer using synchrotron technology.

“The CLS has progressed in such a way that we ship our samples to them and we can control the facility’s robotics right from my office in California,” said Brooks. “The advancing technology is quite remarkable.” 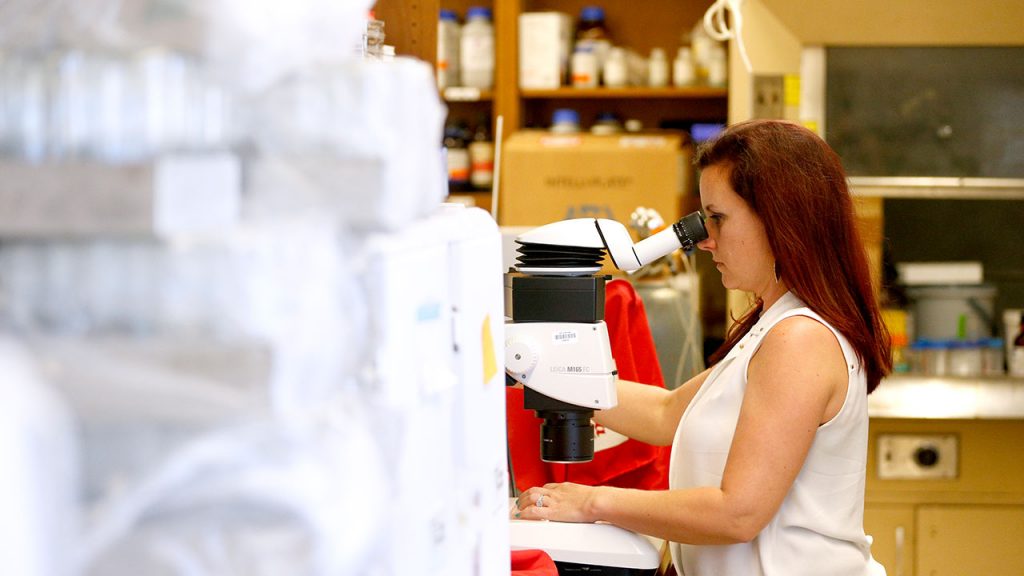 Brandy White, a graduate student with the Department of Chemistry and Biochemistry at Fresno State, worked with Dr. Cory Brooks on the study as lead author. (Dr. Cory Brooks)

How Does the Technology Work?

Through the use of synchrotron technology, researchers like Brooks examine proteins using a particle accelerator that emits intense radiation similar to that of the sun.

Brooks is particularly interested in one protein called mucin, which is found throughout the body and is involved with the production of mucus — this protein is altered in cancer cells, which makes it a unique target for researchers.

“We basically siphon off some of that energy and use it (synchrotron) to look at the structure of the proteins,” said Brooks. “There’s only a handful of these facilities kind of scattered around the world.”

In theory, these proteins would help fight off cancer better than chemotherapy, said Brooks, because chemo ends up killing a lot of the healthy cells as well as cancer cells.

‘That’s why people get so sick from (chemo),” said Brooks. “The goal is that these antibodies would prevent a lot of that because they’re so specific for the cancer cell. In practice, it’s a lot more complicated than that, usually. So there are still side effects, although usually not as bad as chemotherapy.”

Brooks says this type of immunotherapy treatment isn’t new as antibodies are used to treat COVID and have been useful in treating blood cancers. But, for now, many of these antibody treatments are still being used in combination with regular therapies to help improve a person’s survival after chemotherapy.

“So adding this to the treatment mixture is just giving people a greater chance of not having the cancer come back and so on,” said Brooks.

Ovarian Cancer is a Silent Killer

Ovarian cancer is often not detected early enough for traditional therapies like radiation and chemotherapy to effectively contain the cancer.

That’s because its symptoms can often mirror those of other diseases like endometriosis, gastroparesis, and irritable bowel syndrome, which cause symptoms like bloating, constipation, early satiety after eating, and back pain.

Unlike colon cancer, which can be detected through a colonoscopy, or skin cancer which can be visually detected, ovarian cancer does not have a screening test.

“A lot of this just has to do with the structure of the tumor itself, and where it’s located, and the detection,” said Brooks.

While doctors have tried to diagnose the cancer through screening tests, researchers from the U.S. Preventative Services Task Force advise against screening tests because they aren’t accurate.

Instead, physicians rely on physical exams and patients’ self-reporting to determine whether a patient has ovarian cancer.

The Mayo Clinic reports that a number of factors — smoking, endometriosis, polycystic ovary disease, and obesity — can raise a woman’s risk for the disease.

While cancer patients have already benefited tremendously from this new research, Brooks says many of his students are also learning a lot from the research, and have gone on to attend medical school or land promising careers with biotech companies.

“I think a big part of my goal as a researcher is also to train Central Valley students so that they can go on and get careers in biotechnology and biomedical science,” said Brooks. “So I think it’s a good learning opportunity to do something research-wise that is important for people’s health, but also they learn a bunch of very useful skills that can be translated to all kinds of different career options.”

A mixture of undergraduate students, students working on their master’s degrees and grad students studying biochemistry have had a hand in working on something related to the research project, said Brooks. 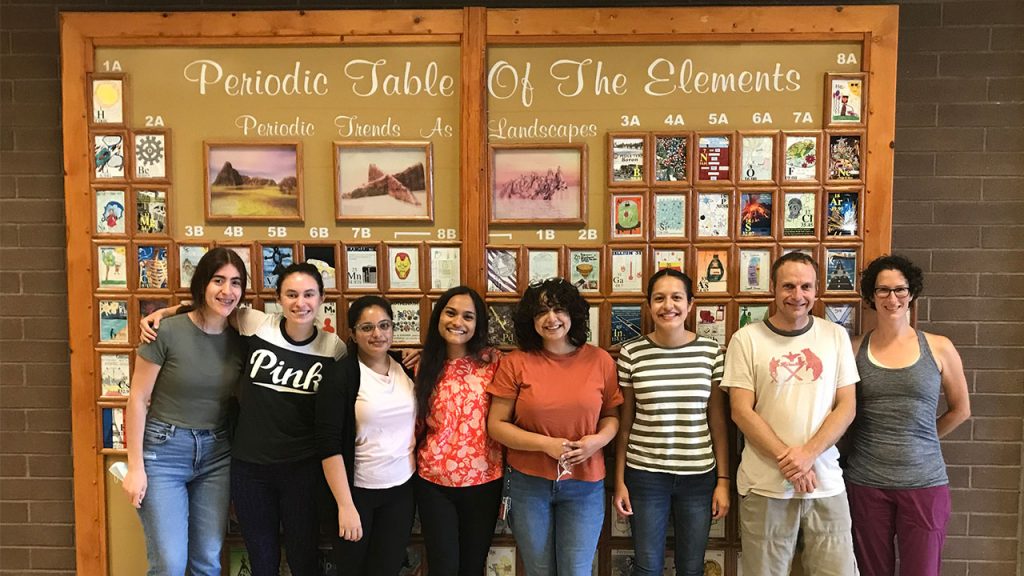 Fresno State professor Dr. Cory Brooks, second from right, was awarded a $400,000 research grant to help find a new treatment for ovarian cancer, and many Central Valley students have had a hand in the project. (Dr. Cory Brooks)

Related Topics:FeaturedWomen's Cancer Care
Up Next

This Peace Mural Will Give Students a Place to Resolve Conflicts