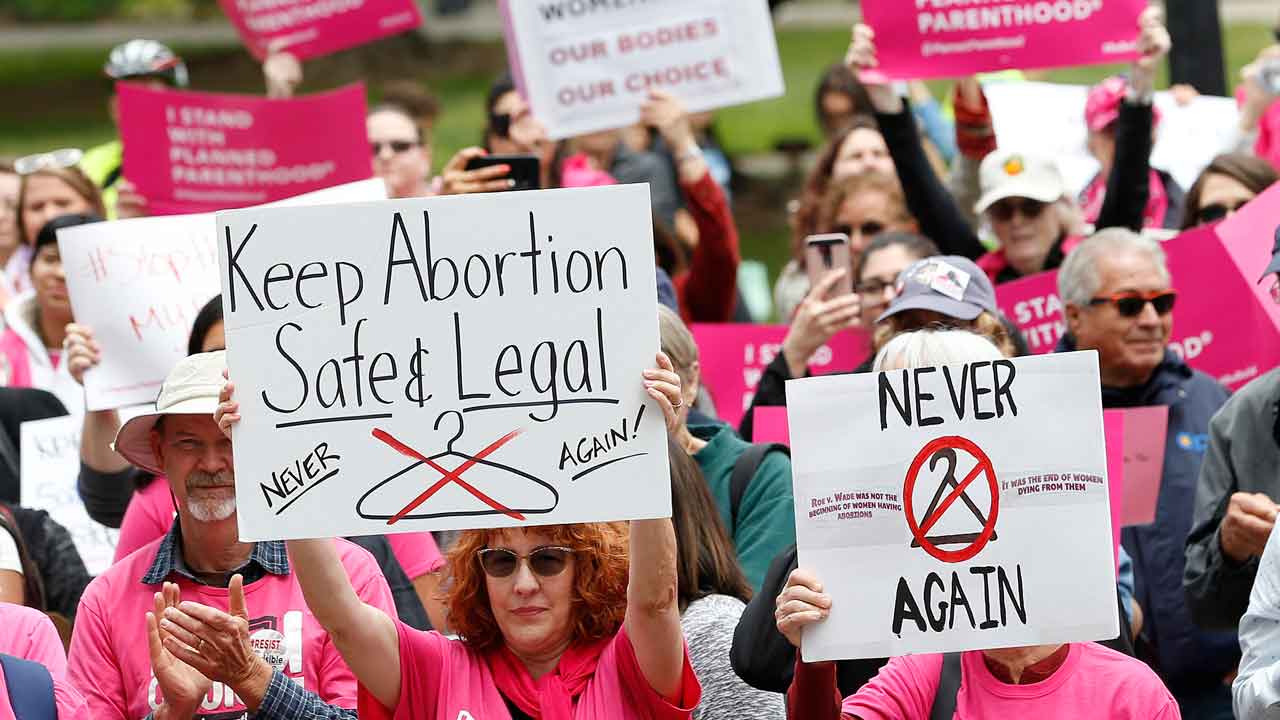 People rally in support of abortion rights at the state Capitol in Sacramento in 2019. (AP File Photo/Rich Pedroncelli)
Share with friends

California lawmakers on Thursday voted to make abortions much cheaper for people on private health insurance plans, bringing California closer to becoming the fourth state in the country to ban insurance fees for the procedure.

Thursday’s vote is part of lawmakers’ strategy to make reproductive care more accessible in preparation for a potential U.S. Supreme Court decision this summer that could overturn Roe v. Wade, the landmark 1973 case that banned states from outlawing abortions.

California already requires private health insurance plans to cover abortion services. But insurers are allowed to charge people things like co-pays and deductibles, which adds an average of $543 to the cost of a medication abortion and $887 to the cost of a procedural abortion, according to an analysis by the California Health Benefits Review Program.

Eliminates Out of Pocket Costs

The Assembly approved a bill that would eliminate out-of-pocket costs for abortions on private health plans. While the bill would reduce the cost of abortions, it would also slightly increase monthly premiums for patients and their employers. But the savings from eliminating out-of-pocket costs would be greater than the increase in monthly premiums.

Three other states ban these fees: Illinois, Oregon and New York, according to a legislative analysis of the proposal. The bill now heads for a procedural vote in the state Senate before heading to Gov. Gavin Newsom’s desk for his review.

“Protecting access to abortion is important now, more than ever, as our fundamental right to reproductive care is under attack in state houses across the country and in the chambers of our U.S. Supreme Court,” said Assemblymember Akilah Weber, who is also an OB-GYN.

Jonathan Keller, president of the California Family Council, which opposes abortion, said eliminating out-of-pocket costs provides an extra incentive for patients to seek abortions “beyond any other health care choice.”

The bill is the first of a number of pieces of legislation Democrats plan to pass this year to strengthen access to abortion in the nation’s most populous states. Other liberal states are doing the same thing, including Washington, which enacted a law on Thursday to prohibit legal action against people seeking an abortion or those who aid them.

The U.S. Supreme Court has let the Texas law remain in effect while it faces a legal challenge. The court heard arguments about Mississippi’s law last year, where a majority of the conservative-dominated court indicated a willingness to either let the law stand or overturn Roe v. Wade.

To prepare for that possibility, on Thursday California lawmakers revealed a bill that would create a mechanism for taxpayers to pay for women in other states where abortion might be illegal to travel to California to receive care.

The bill would create the Abortion Practical Support Fund, which would give grants to nonprofit groups that help women get abortions. The groups could use the money to pay for things like airfare, lodging, ground transportation, gas money, meals, dependent child care, doula support, and translation services.

The fund, which state Sen. Nancy Skinner said would be the first of its kind in the country, would accept private donations, but state lawmakers could also choose to put taxpayer money in it. That would require an appropriation in the state budget.

“We really wanted to double down on our effort to make sure that every Californian has access to the full range of reproductive services they need, including abortion,” said Skinner, a Democrat from Berkeley who is a co-author of the bill along with Democratic Sen. Anna Caballero. “Of course, we have states around us where these restrictions may end up in place, and women who will feel like they have nowhere to turn but a state that is open to them.”

The bill would also create a state-run website that would compile information about California’s abortion providers and available supports in one place.

Californians Could Soon Get a $400 Gas Rebate