McCarthy: 'I Want You There When Pelosi Has to Hand Me the Gavel' 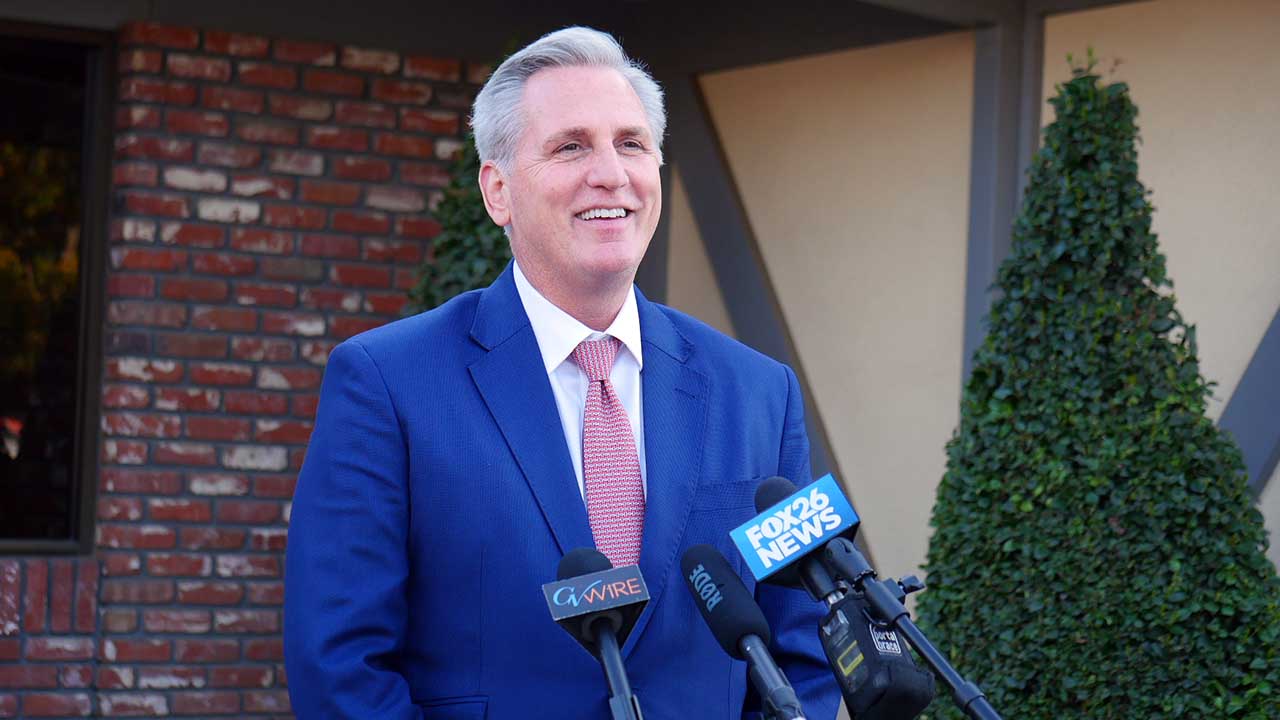 The man who could be second-in-line for the presidency after the November elections visited Fresno and Clovis on Thursday to meet the leaders in a new area for him.

House Minority Leader Kevin McCarthy of Bakersfield held several meetings during his visit, to “listen” to new areas of the 20th District he seeks to represent.

“I’m not elected to this area. Yet now that the new lines have been drawn. The first thing I want to do is come up here and listen to you. I want to hear the concerns,” McCarthy told a crowd of about 100 partisan supporters at an evening meet-and-greet. “I want to be able to work together and if you look at this district, it’s probably the best district in the country. The only problem is we’re surrounded by California.”

If the Republicans regain the House, as several pundits predict, McCarthy is virtually assured of becoming Speaker of the House.

“I want you there in January when Nancy Pelosi has to hand me the gavel,” McCarthy said. 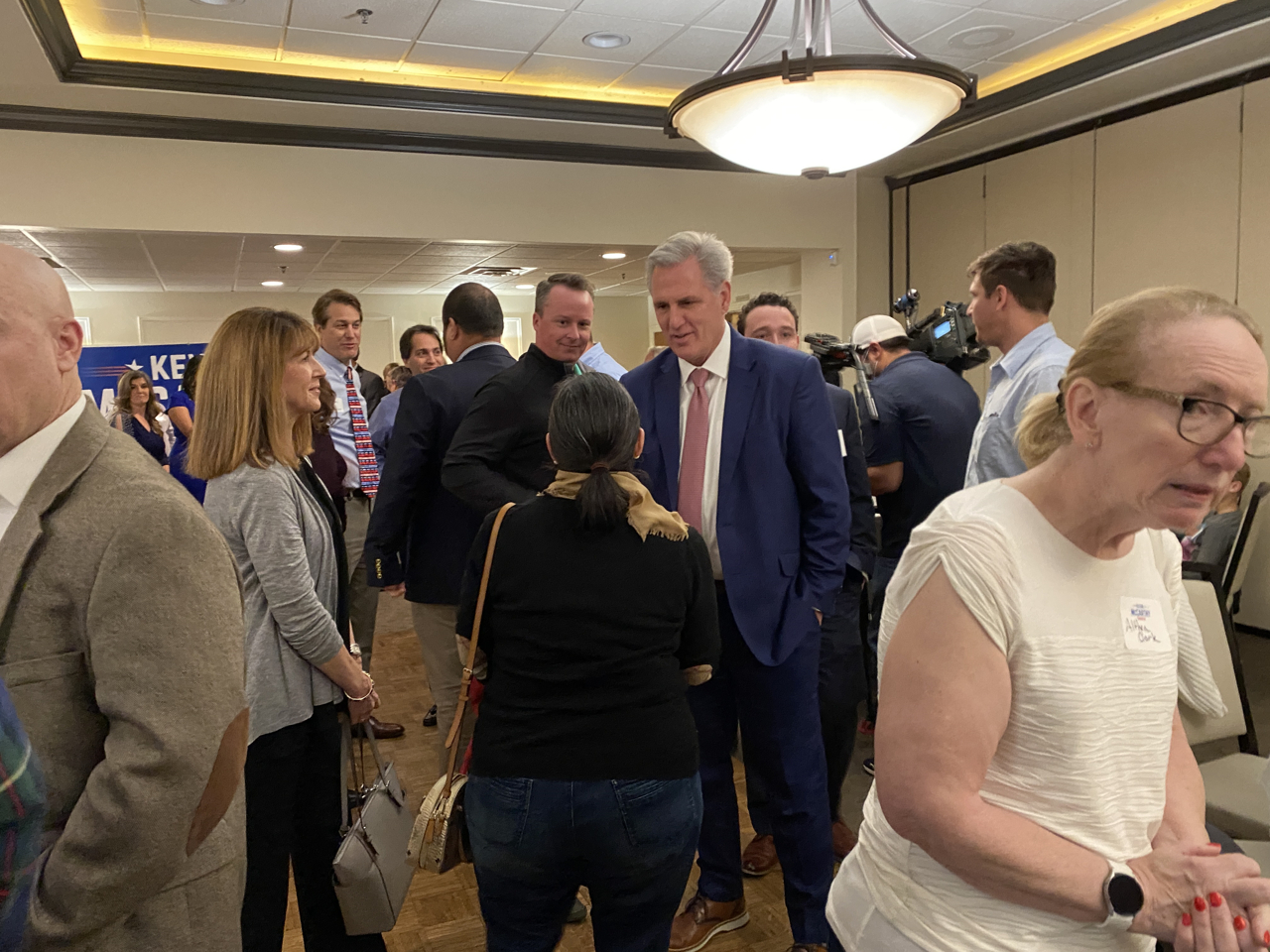 McCarthy hit the right tone with the invite-only crowd at Pardini’s in northwest Fresno. In between quips about his political career, he laid the hammer to the policies of President Joe Biden.

“We feel it no matter whether we’re in the Valley or somewhere else. Inflation, thanks to the Democrats, is high. The gas price of five bucks, got avocados doubling. We’ve got everything that you look at. We’ve got crime, right? You wonder why crime is rising as the Democrats look to defund the police,” McCarthy said.

McCarthy criticized Biden’s border policies on the border, claiming that international terrorists, as well as fentanyl, are coming through.

He blasted Biden on foreign policy, comparing the president to Jimmy Carter of 1979.

“What Joe Biden has done to America by what he did in Afghanistan is going to cost us for decades,” McCarthy said. “When was the last time you had a president when we had an energy crisis? Look to OPEC to solve it instead of letting America become energy independent? When was the last time we had a president? Had inflation like this? But he denies it.”

“He has pushed China and Russia, North Korea and Iran together, almost in an axis against America, when he should be uniting others. Here we are living in a world where almost six million people have died from COVID, and he wouldn’t even stand up to find out where it originated from.”

McCarthy also said that the tensions between Russia and Ukraine could have been avoided if Biden acted earlier.

100% Agree with the Great @LouDobbs. @GOPLeader is a RINO & the GOP needs new leadership.

“I can always run on my record of being a conservative. … I believe the conservatives really put the country on the right path, especially the debt that we have the day, our strength of what we need. We need better conservative views and I think we can lead and make that happen,” McCarthy said.

McCarthy said that former President Donald Trump is an asset to Republicans in the 2022 midterm elections.

“I think it helps turnout.”

And he pointed out that Hispanics now are even in party registration between Republicans and Democrats — as a Wall Street Journal poll conducted in December found.

“If we want to be the majority party, this party has to have their arms wide open and welcome everybody into it,” McCarthy said.

McCarthy met with local Republican leaders earlier in the afternoon at the Clovis Veterans Memorial District.

Participated in discussion with Rep. Kevin McCarthy. I look forward to winning back Congress, our continued fight to defeat the radicals that hate our country, and returning our country to its greatness and the values and ideals from which this exceptional nation was founded. pic.twitter.com/ZxtbRqZ1Fz

McCarthy was coy on what it would mean for Fresno and Clovis to have the Speaker of the House represent the area.

“My very first goal is representing my district and you have to get elected first. The conference will decide who becomes (Speaker). We have to win the majority. They’re not given their earned. And that’s what we’re out doing and that will take place when the time comes,” McCarthy said.

Related Topics:FeaturedKevin McCarthy
Up Next