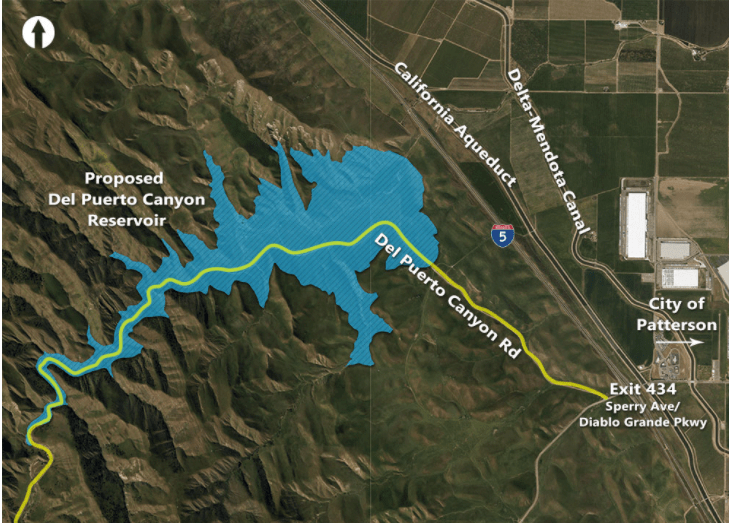 The proposed Del Puerto Dam would store 84,000 acre-feet of water in the hills above Patterson. (delpuertocanyonreservoir.com)
Share with friends

A new California dam project you probably haven’t heard of has already passed the initial environmental stages and recently won approval to apply for possible public funding. Predictably, the project has stoked opposition but not all the naysayers are who you might expect.

The Del Puerto Canyon Reservoir project, which would sit in the hilly, canyon-filled west side of the San Joaquin Valley just above the town of Patterson, has sparked a lawsuit from other valley water users.

“We don’t know the full spectrum of potential impacts,” said Eric R. Quinley, general manager of Delano-Earlimart Irrigation District, one of the water districts opposing the project. “That’s one of the reasons we were forced to intervene as we did.”

“Are there impacts to others? The answer is no,” said Chris White, executive director of the San Joaquin River Exchange Contractors Water Authority, one of the agencies behind the project.

That’s not the only lawsuit against the dam. A group of environmental organizations concerned by potential ecological impacts in the Del Puerto Canyon, finds itself in rare solidarity with water districts, though they oppose the dam for different reasons.

The dam project would create an 800-acre reservoir for 84,000 acre-feet of water storage. The project is a collaboration between Del Puerto Water District and the Exchange Contractors.

“It’s one of the many tools that we want to put in our toolbox to try to combat our problem of very unreliable and unpredictable surface supply allocations,” said Anthea Hansen, general manager of Del Puerto Water District.

All of these agencies receive water from the Bureau of Reclamation through the Central Valley Project, a more than 400-mile network of federal canals and dams that transport water to farms and towns throughout the Valley.

The suing agencies are Friant contractors, meaning they get their water from Millerton Lake via the federal Friant-Kern Canal on the east side of the valley. Those water deliveries depend on the type of water year and can be cut back because of drought. Allocations were cut to 0% in 2014 and 2015 and Friant contractors received nothing. 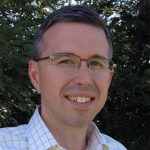 “Friant contractors are not against new storage south of the Delta, we just want to make sure that it doesn’t negatively impact existing contractual rights and obligations.” — Eric R. Quinley, general manager, Delano-Earlimart Irrigation District

The Exchange Contractors, on the other hand, have a different situation.

When the federal government built the Central Valley Project in the 1930s, it took San Joaquin River water from existing water users and moved it to Friant contractors in the southern part of the valley. In “exchange,” the federal government promised the original river users water from the Sacramento-San Joaquin Delta. That promise carries on today and the Exchange Contractors have a strong entitlement to water based on their government contract.

“Who’s counting the water that was available in the prior year but not utilized?” said Quinley.

The Friant contractors asked for models of potential impacts but neither Del Puerto Water District nor the Exchange Contractors did any modeling, Quinley added. Requesting the modeling of impacts is reasonable, he said, given the fact that the Exchange Contract currently doesn’t allow storage of water delivered under it, and is intended only to serve actual demands, not provide a storable supply.

“We got permission to store it in groundwater and so we don’t differentiate the groundwater storage from surface storage.” — Chris White, executive director, San Joaquin River Exchange Contractors Water Authority

That’s why the Friant contractors are concerned about losses on their end, said Quinley.

“We strongly disagree with that,” said the Exchange Contractor’s White. “The water is made available through this existing transfer program that has been scrutinized with this question in mind several times.”

“We got permission to store it in groundwater and so we don’t differentiate the groundwater storage from surface storage,” said White.

The water for Del Puerto Canyon Reservoir would come from conservation, groundwater substitution, or fallowing farmland, added White. That’s why there wouldn’t be any impact on others, he said.

In addition to the conflict with the Friant water users, the project also faces funding challenges. The total cost of the project will likely be about $900 million, said Del Puerto’s Hansen. Although no financials are nailed down yet and that will likely change with time, she added.

Part of the reason the project is so expensive is it requires relocating a major road and electrical utilities.

So far, the project has garnered about $18 million from the Water Infrastructure Improvements for the Nation (WIIN) Act , said Hansen.

And on Dec. 15, the California Water Commission approved the feasibility of the project, meaning it could potentially get funding from Proposition 1, the $2.7 billion water storage fund. But Prop. 1 is no longer accepting applications and the commission’s approval only sets up the project to apply if Prop 1 opens up again for more applications.

Related Story: What Will Become of Fallowed Valley Farmland?

Meanwhile, environmentalists have also taken aim at the project.

“We’ve overallocated our water in California,” said Ross Middlemiss, staff attorney with Urban Wildlands Program at the Center for Biological Diversity, one of the environmental organizations suing over the project. “We’re trying to create more storage opportunities in an already overstressed water system and that has really, really negative outcomes for species, for habitat, and for communities.”

The Center for Biological Diversity is joined by the Sierra Club, the California Native Plant Society, and Friends of the River in the lawsuit. The main thrust of the lawsuit argues that Del Puerto and the Exchange Contractors didn’t properly complete state environmental assessments and that there isn’t enough proposed mitigation to reduce harmful environmental, community, and cultural impacts.

“It’s important to consider, what are the costs of a project like this?” said Middlemiss. “And who bears those costs? And who’s reaping the benefits?”

The next few years will be spent on engineering, designing, and permitting the project, said Hansen. If all goes smoothly, construction could begin as early as 2026.