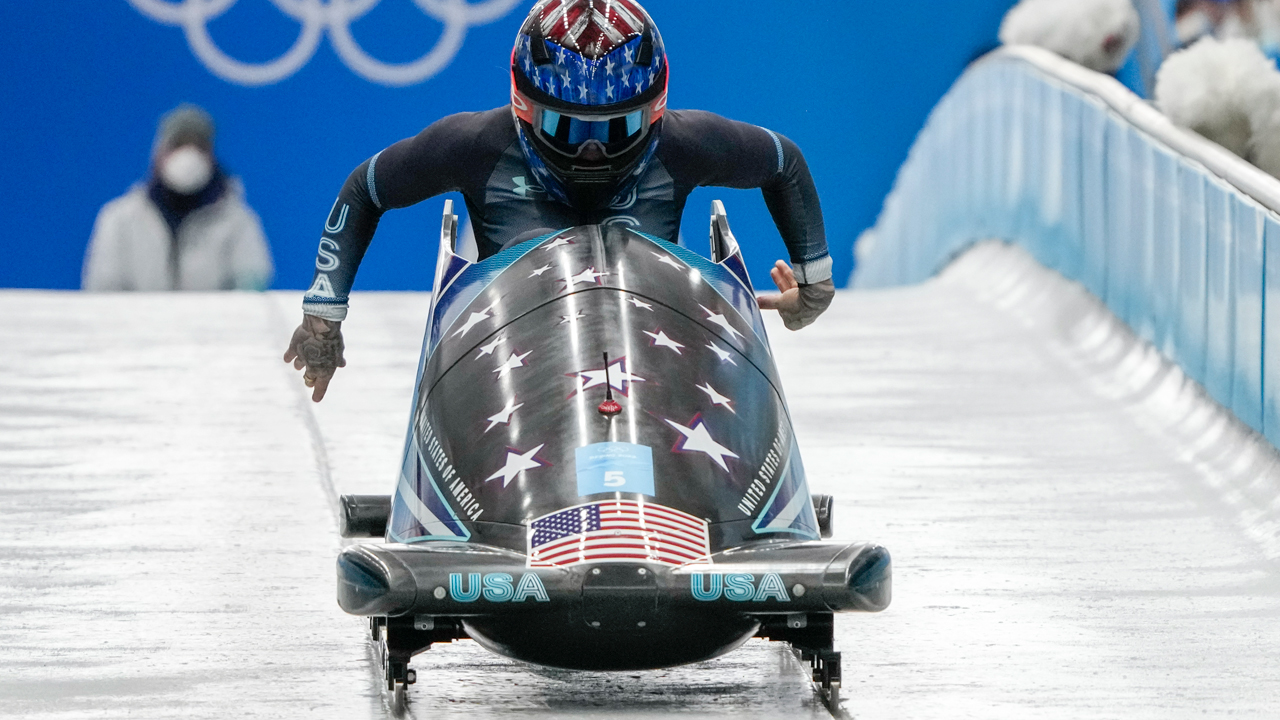 BEIJING — Kaillie Humphries crossed the finish line, jumped from her sled, and hoisted an American flag that someone had just handed her into the frosty air.

Four years ago, nobody would have seen that coming. The former Canadian bobsled heroine is an Olympic gold medalist for the third time — and for the first time, as a U.S. citizen.

Humphries is monobob’s first Olympic champion, finishing off a surprisingly easy win at the Beijing Games on Monday. She completed four runs in 4 minutes, 19.27 seconds to lead a gold-silver finish for the U.S. women’s program, with teammate Elana Meyers Taylor placing second.

“As I age, I’ve learned life is very unpredictable and we don’t always know our path forward and what the future holds,” Humphries said. “We do the best we can with each and every obstacle or path change that gets thrown at us. What’s important is to fight for ourselves.”

Meyer Taylor Takes Silver for US

Meyers Taylor was second in 4:20.81 — 1.54 seconds back — for her fourth Olympic medal, one that came after she took a year off following the Pyeongchang Games to become a mother. Christine de Bruin of Canada was third in 4:21.03.

Humphries gave the medal a big kiss as she put it around her neck, then put her hand over her heart and sang along with “The Star-Spangled Banner” as it blared in her honor.

“I give so much credit to the coaches, the staff, the U.S. Olympic and Paralympic Committee for thinking about everything that can possibly go into supporting both Elana and Kaillie,” USA Bobsled and Skeleton CEO Aron McGuire said. “And it worked out. Certainly, a storybook ending.”

It was the biggest winning margin by far in any of the six Olympic bobsled races that have been contested by women, smashing the 0.85-second victory that Humphries enjoyed at the 2010 Vancouver Games.

And the last time any Olympic bobsled race saw such a margin between first and second place was 42 years ago, when Erich Schärer of Switzerland won the two-man event at the 1980 Lake Placid Olympics by 1.57 seconds.

“I’m one small piece of what this medal means,” Humphries said. “It’s taken a lot to get to this point.”

Meyers Taylor is now a four-time medalist, giving her the most in USA Bobsled history — breaking a tie with three others, the great Steven Holcomb among them — and tying her for sixth most in U.S. Winter Olympic history.

“It’s bittersweet because I would have loved to see Holcomb win another one in 2018 and I know he would have, another two probably,” Meyers Taylor said. “I think Holcomb’s records are precious.”

Like Humphries, Meyers Taylor also went through struggles to get here. Concussions nearly derailed her career, then she took a year off to have her first child, a boy born with Down syndrome and significant hearing loss. And in Beijing, she did a stint in isolation — spending more time away from her son than she ever had since his birth two years ago — after testing positive for COVID-19.

But it was fitting that Humphries and Meyers Taylor finished 1-2 — the first gold-silver finish for the U.S. in an Olympic bobsled race since 1932 — because they were the ones who championed a second medal event being added to the women’s bobsled Olympic program.

“I am to the moon with this medal,” Meyers Taylor said. “I was, at one point, just trying to make it to the race. So to be here now, a silver medalist, it feels so amazing.” 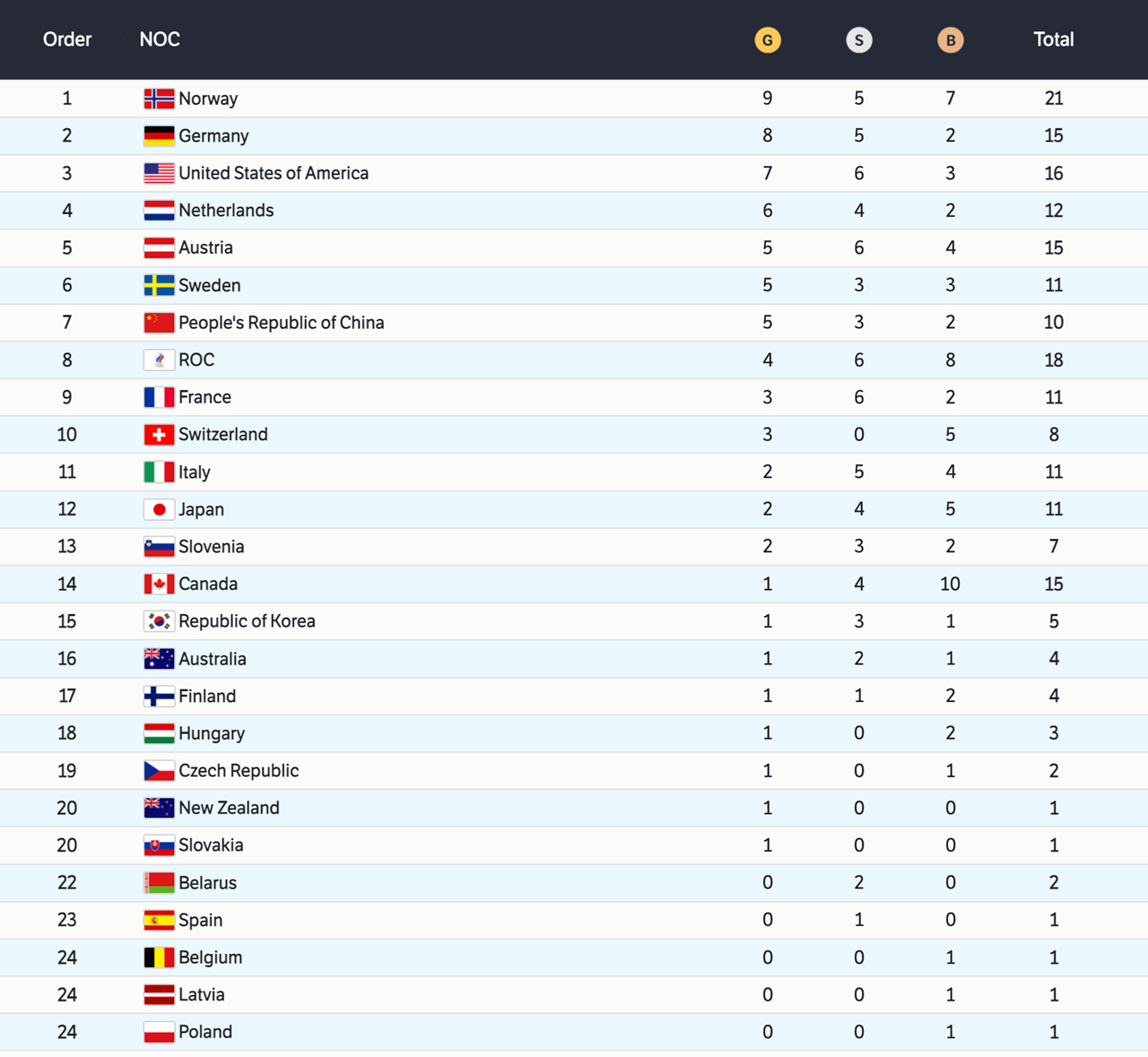 US Will Meet Canada for Women’s Hockey Gold

Hilary Knight had a goal and assist, Alex Cavallini stopped 25 shots, and the defending Olympic champion United States defeated Finland 4-1 in a women’s hockey semifinal on Monday to set up the sixth gold-medal showdown between the Americans and Canada.

The cross-border rivals will play on Thursday after Canada erupted for five first-period goals over an Olympic record span of 3:24 in a 10-3 win over Switzerland earlier in the day. The two world powers have played for the championship in every Olympic tournament except the 2006 Turin Games, when Canada defeated Sweden after the Swedes eliminated the Americans in the semifinal round.

This time, the United States is attempting to defend its title following a 3-2 shootout win at the 2018 Pyeongchang Games, which ended Canada’s Olympic run of four championships.

Cayla Barnes had a goal and assist, and Hayley Scamurra and Abby Roque, with an empty-netter, also scored for the U.S.

Shiffrin Will Go in the Downhill

Mikaela Shiffrin has confirmed that she will race the downhill at the Winter Olympics for the first time Tuesday.

She says she’s changing how she thinks about what is at stake as she prepares for her fourth event in Beijing.

She finished a second training session at the Yanqing Alpine Skiing Center with the 15th-fastest time among the women who didn’t miss a gate.

The two-time gold medalist in Alpine skiing did not finish her opening runs in either of her initial two events, the two-leg giant slalom and slalom, before coming in ninth in the super-G, another race she hadn’t previously entered at an Olympics.

As someone who specialized in the technical disciplines of slalom and giant slalom, the speed events of downhill and super-G are still new and works-in-progress for Shiffrin.

Esmeralda Soria, Assembly Candidate, Has Mounting Ethical Issues. Is She Fit to Serve?