Storied 49ers-Cowboys Playoff Rivalry Resumes. What Are Your Memories? 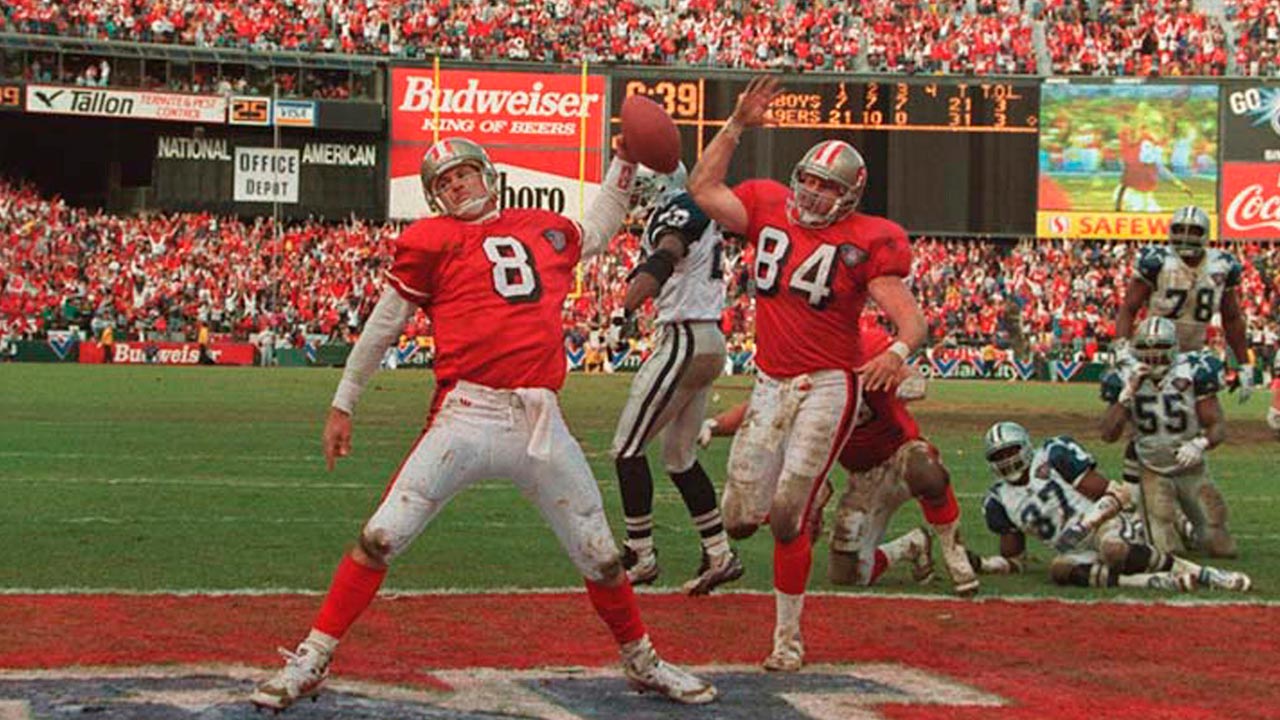 SANTA CLARA — Kyle Shanahan was a teenager watching on the sideline when the heated playoff rivalry between the Dallas Cowboys and San Francisco 49ers reached a fever pitch with three straight NFC title game matchups.

Now Shanahan will take a starring role when one of the NFL’s great rivalries resumes as head coach of the 49ers instead of son of their offensive coordinator when San Francisco visits Dallas on Sunday in a wild-card matchup.

“I think that’s as cool as it gets because that’s the coolest part of my childhood growing up I feel like,” Shanahan said. “It was seventh grade, eighth grade, ninth grade, ’92, ’93, ’94, every single year. I thought we were the best team in the league. … I remember being on that sideline and just watching how good the Cowboys were and it was unbelievable. And the next year, going to Dallas for the home-field advantage. And we all know what happened there, that one wasn’t even close.”

Shanahan then went into a deep dive on the meeting the next season that San Francisco won as if the game happened last week instead of more than a quarter-century ago.

“As you can tell, those games I still remember them,” he said. “Those are part of my childhood, that was such cool football because everyone knew that for those three NFC championships, those three years were the Super Bowl.”

Related Story: ‘Job Is Not Done’ Says Carr as Raiders Prep for Playoffs

The 49ers-Cowboys playoff history is a rich one from back-to-back conference title games in the early 1970s, the iconic “Catch” in the 1981 season and then the heated rivalry in the 1990s when the Cowboys won the first two meetings on the way to Super Bowl titles and then the Niners took the third game.

“Boy, were the games close,” Cowboys owner Jerry Jones said on his radio show. “It was just nip and tuck all the way, and it was a play here, a play there, and that’s the playoffs. These things are just razor-thin as to how you can end up advancing in these playoffs. In those years, it made a lot of difference.”

This will be the eighth time these franchises have met in the postseason, tied for the second-most of any matchup in the Super Bowl era to the nine games between the Rams and Cowboys.

But with six of the previous matchups coming in the conference title game, few rivalries have had as many big games or star players such as Roger Staubach, Joe Montana, Jerry Rice, Emmitt Smith, Deion Sanders, Steve Young, Troy Aikman, and Michael Irvin.

“I’m damn fired up, man,” Cowboys defensive coordinator Dan Quinn said. “Are you kidding me? The early 90s Dallas-Niners, some of the championship games, for me, coming up and watching those ones, I can hear (John) Madden and (Pat) Summerall talking it through. My first Dallas and Niner playoff game, I’m pretty fired up to do it man. It’s exciting.”

It’s been a long time coming as this will be the first playoff matchup since the 1994 season when the Niners beat the Cowboys in the NFC title game.

In fact, this is the first time since 1998 that both teams are in the playoffs in the same season, meaning the current players don’t have the same nostalgia to the rivalry.

“Not at all,” Shanahan said. “I wish I could say yes, but some of these players were born in the 2000s. So you like to think so, but every day in the quarterback room, when I ask certain questions like, ‘Have you seen Wedding Crashers?’ And they don’t even know that sometimes.”

Here’s a look at the history of the playoff rivalry.

The teams squared off in the first three years after the merger with the Cowboys beating the Niners for the NFC title game in 1970 and ‘71 and again the next year to help launch their status as “America’s Team.”

In the first meeting at Kezar Stadium in San Francisco, Dallas used 143 yards rushing and a TD from Duane Thomas and two interceptions of John Brodie to win 17-10.

Dallas’ defense dominated again the next year with three more interceptions of Brodie in a 14-3 win that led the Cowboys to their first Super Bowl title.

The next meeting in the divisional round at Candlestick Park helped Staubach earn the moniker of “Captain Comeback.”

Staubach entered the game in the fourth quarter with Dallas down 28-13 and led the team on three scoring drives. He threw a 20-yard TD pass to Billy Parks with 1:20 left to cut the deficit to 28-23. After a successful onside kick, the Cowboys won it on a 10-yard TD pass from Staubach to Ron Sellers with 52 seconds to play.

The Niners fell off after that three-year run, but got their revenge with a late-game comeback of their own to launch a dynasty in the 1981 NFC championship game. 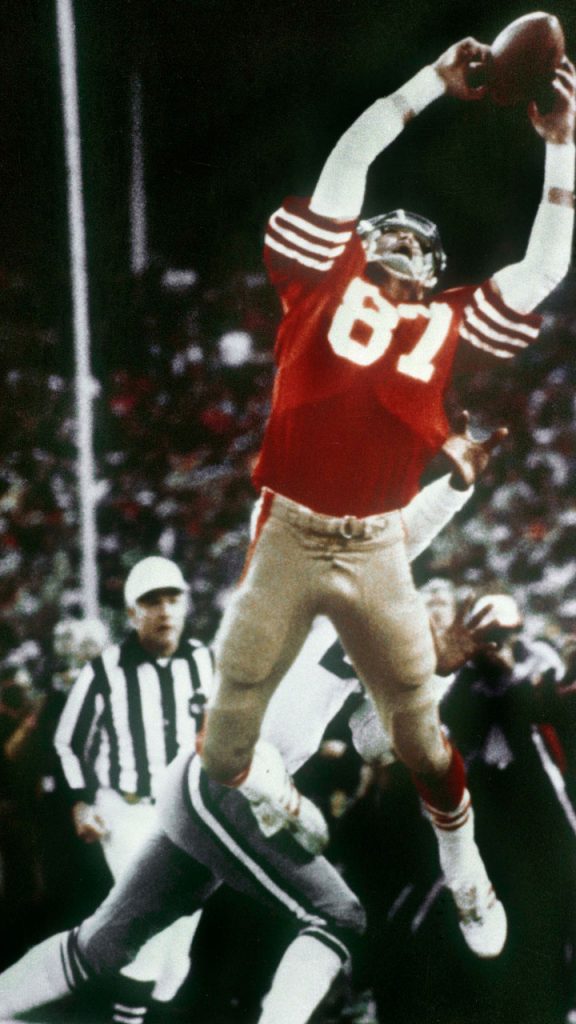 Dwight Clark makes “The Catch,” a pass from Joe Montana that tied the game late in the fourth quarter against the Cowboys in the NFC championship game at Candlestick Park on Jan. 10, 1982. The extra point gave the 49ers a 28-27 win and a berth in the Super Bowl. (Phil Huber/The Dallas Morning News via AP, File)

San Francisco took over at its 11 with 4:54 to play trailing 27-21 when Montana took over. He picked apart Dallas’ Doomsday Defense with a quintessential West Coast offense drive.

Then the Niners faced a third-and-4 at the Dallas 6 with less than a minute to play when Bill Walsh called “Spring Right Option.” Montana rolled right and couldn’t find an open receiver immediately. Then with Ed “Too Tall” Jones and the Dallas defense closing in, Montana launched a high pass that seemed headed out of the end zone.

But Dwight Clark leaped over Everson Walls in the back of the end zone and came down with “The Catch” to give San Francisco a 28-27 lead.

The win was sealed when Danny White lost a fumble and San Francisco won its first of five Super Bowl titles in a 14-year span two weeks later.

“Start of a dynasty,” former 49ers president Carmen Policy said. “I don’t let myself go down the road of what would have happened if he doesn’t make that catch.”

How ’bout Them Cowboys?

While the Niners dynasty was launched with that win, it was the start of Dallas’ demise under coach Tom Landry. The Cowboys bottomed out with a one-win season in Jimmy Johnson’s first season in 1989 before beginning a steady rise.

That helped lead to the Cowboys making it to the 1992 NFC title game in San Francisco against a stacked Niners team led by Steve Young and Jerry Rice.

But the young Cowboys didn’t flinch, getting two TDs from Smith to build a 23-20 lead and then Aikman helped seal it with a 70-yard pass to Alvin Harper to set up another TD.

The rematch the next season wasn’t nearly as tight with the Cowboys building a 28-7 halftime lead on the way to a 38-21 win after Johnson guaranteed victory earlier in the week. Johnson punctuated both wins with his “How ’bout them Cowboys!” proclamation in the victorious locker room.

“I’ve been talking all week,” Johnson told his team. “If you’re gonna talk the talk, you gotta walk the walk. Thanks to you guys, y’all did the walkin.”

After those two losses raised questions if Young would ever win the “big one,” the game the next year helped establish him as one of the greats.

Eric Davis got it started with a pick-6 on the opening possession. Two more turnovers helped San Francisco break out to a 21-0 lead less than five minutes into the game.

“Spotting them a 21-point lead was like spotting Carl Lewis 20 yards in a 100-yard dash,” Smith said.

Young did the rest with two TD passes and a TD run and went on to win Super Bowl MVP two weeks later.

“To answer that pressure is one of the great feelings in sports,” he said after that win over Dallas.