Healthcare for All Immigrants Leads Newsom's $286B Budget Plan 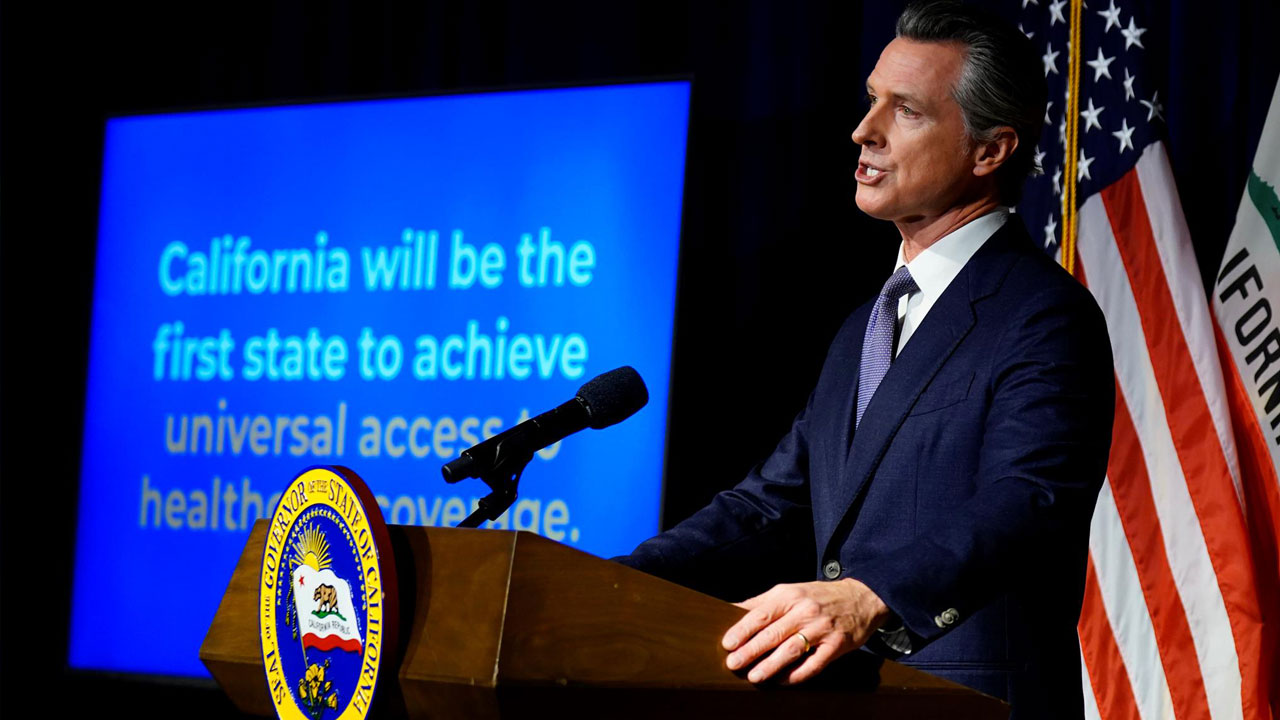 Gov. Newsom wants California to be the first state to cover everyone under Medicaid regardless of immigration status. (AP/Rich Pedroncelli)
Share with friends

SACRAMENTO — Backed by soaring revenues amid the pandemic, California Gov. Gavin Newsom on Monday proposed a budget that would pay for the healthcare of all the state’s low-income residents living in the country illegally, while cutting taxes for businesses and halting a scheduled increase in the gas tax later this summer.

“We’re doing something that no other state has done,” Newsom said.

Such a long time coming. It will truly make our state shine even brighter! #Health4All https://t.co/Y5KqcNgCSj

Newsom said his $286.4 billion budget proposal tackles five of the state’s biggest problems — what his administration called “existential threats” — including the surging coronavirus pandemic; wildfires and drought worsened by global warming; homelessness; income inequality including the lack of health insurance for some immigrants; and public safety, including combatting a recent flurry of coordinated smash-and-grab robberies.

The “existential” label is usually applied to climate change and the pandemic, Newsom acknowledged, but he said homelessness, the rising cost of living, and public safety are “understandably top of mind in terms of people’s concerns.”

The governor said his budget includes a $45.7 billion surplus, which is larger than previous estimates because his administration uses a different definition of what counts as surplus.

The proposed $2.2 billion program to aid immigrants in the country illegally would not take effect until January 2024 to include “all low-income Californians, regardless of immigration status,” Newsom said.

The state has made great strides in reducing its uninsured population in recent years, but the largest single group left behind under the state’s Medicaid program are low-income residents in the country illegally.

The state began covering immigrants 26 and under in 2019, and those 50 and older last year.

Governor Will Haggle With Fellow Dems on Final Budget

The governor’s budget address kicks off months of haggling with his fellow Democrats who control the state Legislature, talks that will intensify when Newsom presents an updated spending proposal in May.

Some progressive legislative Democrats last week proposed creating in California the nation’s first universal health care system, backed by steep tax hikes that would have to be approved by voters. But Newsom touted his own more incremental approach.

Newsom also has pledged to spend $300 million on boosting law enforcement efforts to combat retail theft and another $2.7 billion to spend on things like coronavirus testing and hospital staffing.

He additionally on Monday proposed spending $648 million to back wildland firefighters and buy more helicopters and bulldozers, plus another $1.2 billion on top of the current budget year’s $1.5 billion for forest management.

Another $750 million would go to drought relief, on top of the current budget year’s $5.2 billion water package.

Also on the environmental front, he pledged to keep reducing California’s reliance on fossil fuels.

“On the surface, there are certainly things to like in this proposal; funding for clean water, wildfire prevention, and homelessness are all worthy goals,” Assembly Republican Leader Marie Waldron said in a statement. “But look at the details and you’ll see that much of this spending isn’t going to transformative projects to improve the lives of Californians, but rather to clean up from years of Democratic mismanagement.”

To help with the ever-growing cost of living in California, Newsom proposed “doubling down” on the state’s existing plan to provide free universal pre-kindergarten; adding thousands of child care slots and boosting before-, after- and summer school programs.

He also proposed continued aid to small businesses hit hard by the pandemic by waiving fees and providing hundreds of millions in grants and tax breaks.

Dyer Says There’s Much to Like in Newsom’s Budget