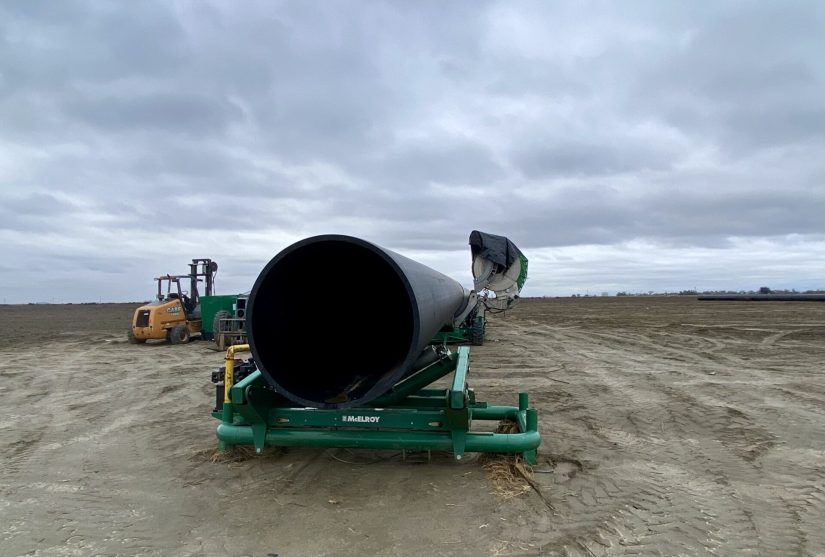 A piece of pipeline south of Stratford rests in the arm of a piece of heavy equipment on Dec. 16, 2021. (SJV Water/ Lois Henry)
Share with friends

A large water pipeline being built near Lemoore in Kings County is raising eyebrows as much for its possible uses as for the name associated with its construction — John Vidovich.

The large, black pipe could be seen earlier this month being tucked into the ground along 21st Avenue just south of Highway 198 and west of Lemoore. Parts of the line were laid out on top of the ground meandering south toward the small town of Stratford. Stacks of pipe were staged even further south. All of it was on land listed as belonging to Sandridge Partners, according to onX Hunt, a mobile app that shows land ownership boundaries with detailed satellite images.

Sandridge Partners, one of the largest farming operations in Kings County with 102,000 acres, is controlled by Vidovich.

Vidovich wouldn’t say much about the pipeline when reached Tues other than that several lines are going in, some by Sandridge and “some are 761 lines,” he said in reference to Tulare Lake Reclamation District 761, which is also controlled by Sandridge.

When asked why Sandridge or Reclamation District 761 are installing pipelines, Vidovich said there’s a lot of sand in the area that can “perch” water, or draw it down from unlined canals creating significant losses.

“More and more water districts are putting in pipe because of the problems with perched water,” he said.

He wouldn’t say what kind of water Sandridge or 761 would be moving in the pipeline, where to, or why, just that any kind of water can move in pipelines, including river water, groundwater or water imported from the state.

“I just don’t know what to tell you,” Vidovich said before abruptly ending the call.

Yes, Steve Haugen, Director of the Kings River Water Association said, he has begun hearing a lot of scuttlebutt about this new pipeline.

“We are interested in it and we need to verify whether it’s a groundwater or a surface water project,” Haugen said. “If it’s surface water, that falls under the jurisdiction of the KRWA and we want to know what’s going on.”

Pipeline construction is fairly common in the region. Farmers or water districts will put in lines to move water more efficiently, as Vidovich suggested. And the KRWA isn’t typically notified of those events.

This line is different, however, Haugen said.

“I haven’t been out to physically look at it myself,” he said. “But it’s my understanding that it doesn’t run along existing canal alignments and it’s quite extensive. It goes on for miles.”

The case is being heard in Kern County by Superior Court Judge David Lampe. The judge made a partial ruling in June that long-standing river agreements do allow river owners to move water within the service area. The boundaries of that service area, however, have yet to be determined by the judge. A trial date has been set for December 2022.

Vidovich Has History of Shipping Water

If Vidovich is planning to move groundwater, either within or outside of Kings County, in a new pipeline, it wouldn’t be a first for him.

A water district he controls called Angiola was sued in 2013 by the Pixley Irrigation District in Tulare County for pumping large amounts of groundwater from inside that district and piping it to lands in western Kings County — and possibly Kern County. As part of that legal settlement, Angiola agreed not to ship groundwater outside of Tulare or Kings counties.

But there are no strings on Kings County groundwater. Unlike other counties, Kings doesn’t have a law prohibiting the movement or sale of native groundwater beyond its borders.

“I’ve been trying for 12 years to get that passed,” said Kings County Supervisor Doug Verboon. “We don’t have an ordinance on groundwater like other counties because the people in charge of the water are the ones exporting it.”

Though his fellow board members have been generally opposed to getting involved in water policy, Verboon said this drought and recent news coverage of Kings County water issues may be changing minds. 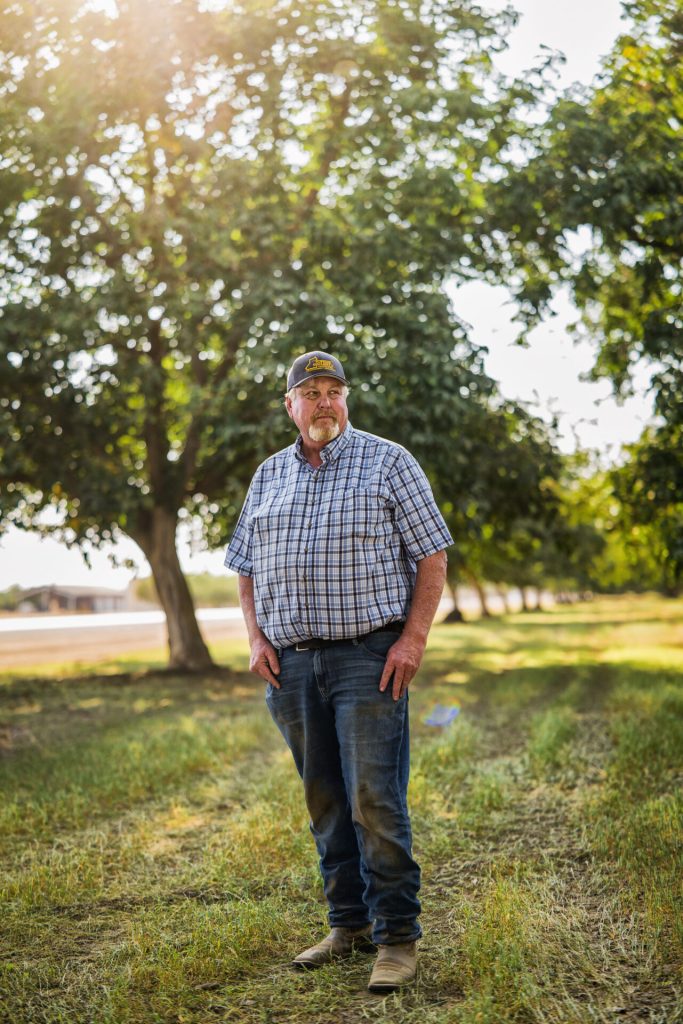 Hanford farmer Doug Verboon, a member of the Kings County Board of Supervisors, says he’ll introduce a new groundwater ordinance to keep water within the county. (SJV Water/Ryan Christopher Jones)

He plans to introduce a groundwater ordinance in the coming year and hopes to see it passed by this time in 2022. A broad outline of his concept is that groundwater would have to be kept in Kings, unless the exporter could bring in replacement water that was in excess of what was shipped out.

Verboon said he had also heard about the new pipeline west of Lemoore and was planning to find out more.

For his part, Vidovich has been open about taking at least some of his water out of Kings County.

“We amalgamate our water to use on our most productive land,” he has previously told SJV Water. But, he said, that’s state water, not groundwater. If he does move groundwater, it’s kept within Kings County, he said. And the land he takes it from is allowed to go fallow, so he’s not “double-dipping” from the aquifer, he has noted.

Even if the pipeline under construction just moves groundwater from one part of the county to another, Verboon said, it could be problematic under the Sustainable Groundwater Management Act, which mandates that overdrafted water basins balance their aquifers, meaning more water shouldn’t be pumped out than goes back in.

“It makes sense to move your water to the best farm ground, that’s OK. But if it’s hurting your neighbors (by drawing down their water table) that’s not right.”