Democrats 'Not Giving up' on Biden Bill, Talks With Manchin 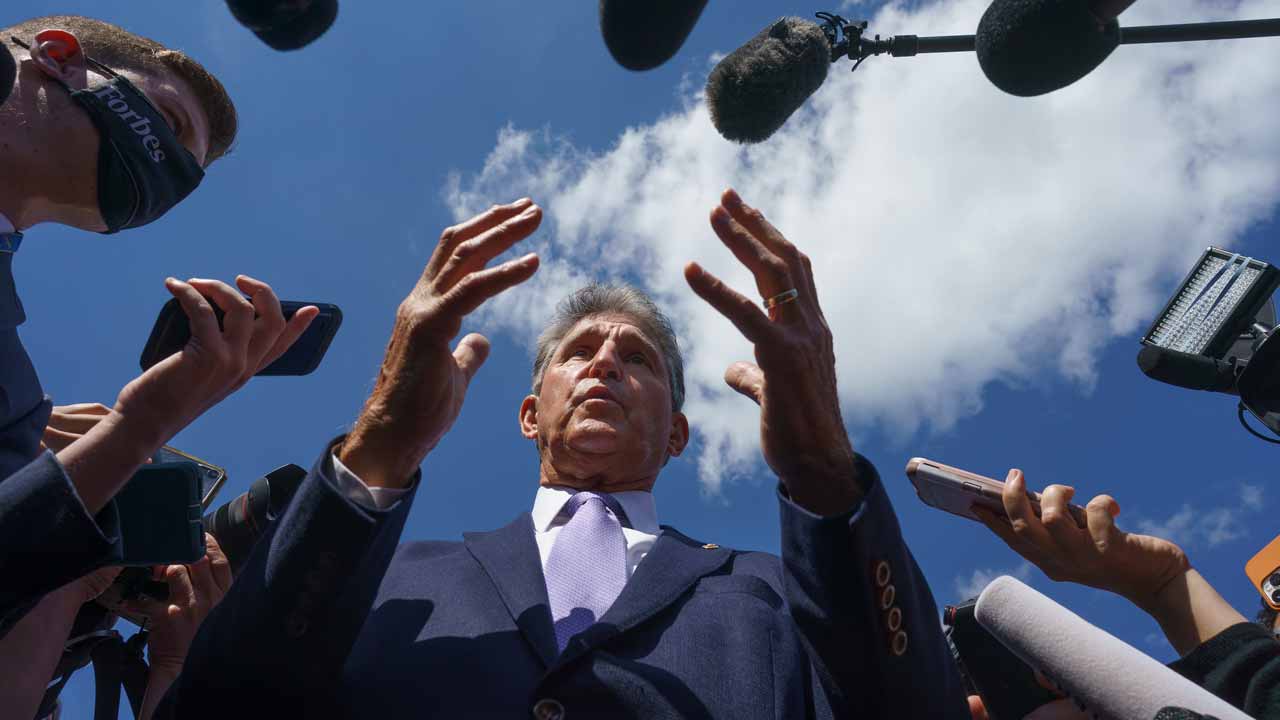 But Republicans are voicing greater confidence now that they can beat back much of what they don’t like in the package. “As we ended the year, it looks to me like they couldn’t swallow the spinach,” Sen. Mitch McConnell, the Senate Republican leader, said Wednesday of the Democrats.

Biden, responding to reporters’ questions Tuesday at the White House, joked that he holds no grudges against the conservative West Virginia senator whose rejection of the social services and climate change bill stunned Washington just days ago.

Biden: ‘Going to Get Something Done’

Instead, the president spoke passionately about the families who would benefit from the Democrats’ ambitious, if now highly uncertain, plan to pour billions of dollars into child care, health care and other services.

“Senator Manchin and I are going to get something done,” Biden said.

The president’s off-the-cuff remarks constitute his first public statement as Democrats struggle to pick up the pieces from Manchin’s announcement over the weekend that he would not support the bill, as is. Manchin essentially crushed Biden’s sweeping policy measure in the 50-50 Senate, siding with all Republicans who oppose the bill.

Senate Majority Leader Chuck Schumer also struck a determined tone later Tuesday, telling Senate Democrats on 90-minute video call to expect a vote in January on the package as they push toward a deal.

Schumer acknowledged the frustration among Democrats but he told senators the party was “not giving up” on the proposal, according to a Democrat on the private call who provided details on the condition of anonymity.

But the Democrats face serious questions over whether the $2 trillion initiative can be refashioned to win his crucial vote or the party will be saddled with a devastating defeat.

Manchin and his party are so far apart, his relationships so bruised after months of failed talks, it’s unclear how they even get back to the negotiating table, let alone revive the more than 2,100-page social services and climate change bill.

All of that is encouraging to McConnell.

“Now, I know Schumer said last night on a call he’s not giving up,” the Kentucky Republican told the Hugh Hewitt Show. “I don’t expect him to do, but the worst of BBB, it appears to me, is dead.” He used the shorthand for the Build Back Better plan.

Biden spoke forcefully of the economic pressures that strip away the “dignity of a parent” trying to pay the bills, and the assistance millions could receive from the federal government with the legislation. He also said his package would help ease inflationary pressures and pointed to analyses suggesting it would boost the economy.

“I want to get things done,” Biden said. “I still think there’s a possibility of getting Build Back Better done.”

The setback has thrown Biden’s top legislative effort into deep doubt at a critical time, closing out the end of the president’s first year and before congressional midterm elections when the Democrats’ slim hold on Congress is at risk.

Coupled with solid Republican opposition, Manchin’s vote is vital on this and other initiatives, including the Democrats’ priority voting rights legislation that Schumer also said would come to an early vote.

On Tuesday, Schumer said that if Republicans continued to block voting rights legislation in January, the Senate would bring forward proposals for changing the Senate rules, a Democrat on the video call said. That’s a nod to long-running efforts to adjust or end the filibuster, which typically requires a 60-vote threshold for measures to advance.

While Manchin has said he cannot explain the bill to constituents in West Virginia, a union representing coal miners, including some of the nearly 12,000 from his home state, put out a statement urging the lawmaker to “revisit his opposition” to the package.

Cecil Roberts, president of the United Mine Workers of America, outlined the ways the package would benefit union members, such as those in West Virginia, the most coal-dependent state in the country.

Some of those provisions would extend the current fee paid by coal companies to fund benefits received by victims of coal workers’ pneumoconiosis, or black lung. The bill would also provide tax incentives to encourage manufacturers to build facilities in the coalfields, potentially employing miners who have lost their jobs, according to the union.

The next steps remain highly uncertain for the president and his party, with Congress on recess for the holiday break.

The White House appeared to take interest in Manchin’s preference for a reimagined bill that would tackle a few top priorities, for longer duration, rather than the multifaceted and far-reaching House-passed version.

But it will be extraordinarily difficult for progressive and centrist Democrats to rebuild trust to launch a fresh round of negotiations, having devoted much of Biden’s first year in office to what is now essentially a collapsed effort.

The sweeping package was among the biggest of its kind ever considered in Congress, unleashing billions of dollars to help American families nationwide — nearly all paid for with higher taxes on corporations and the wealthy.

For families with children, it would provide free pre-school and child care aid. There are subsidies for health insurance premiums, lower prescription drug costs and expanded Medicaid access in states that do not yet provide it. The bill would start a new hearing aid program for seniors. And it has more than $500 billion to curb carbon emissions, a figure considered the largest federal expenditure ever to combat climate change.

A potential new deadline for Biden and his party comes with the expiration of an expanded child tax credit that has been sending up to $300 monthly directly to millions of families’ bank accounts. If Congress fails to act, the money won’t arrive in January.

US Population Growth at Lowest Rate in Pandemic’s 1st Year

US Probes Potential of Drivers Playing Video Games in Teslas