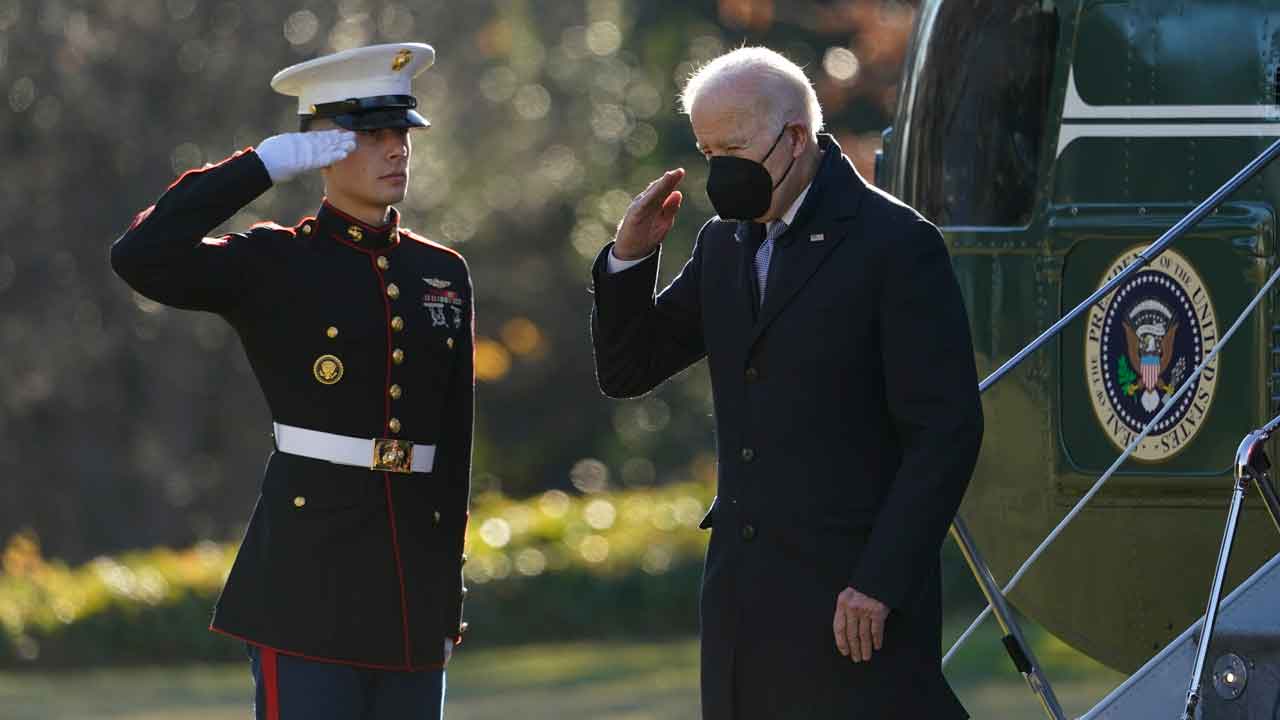 President Joe Biden salutes as he steps off Marine One on the South Lawn of the White House. (AP Photo/Patrick Semansky)
Share with friends

A final rule being issued Monday would raise mileage standards starting in the 2023 model year, reaching a projected industry-wide target of 40 miles per gallon by 2026 — 25% higher than a rule finalized by the Trump administration last year and 5% higher than a proposal by the Environmental Protection Agency in August.

“We are setting robust and rigorous standards that will aggressively reduce the pollution that is harming people and our planet – and save families money at the same time,” EPA Administrator Michael Regan said in a statement.

Regan called the rule “a giant step forward” in delivering on President Joe Biden’s climate agenda “while paving the way toward an all-electric, zero-emissions transportation future.″

The move comes a day after Democratic Sen. Joe Manchin delivered a potentially fatal blow to Biden’s $2 trillion social and environmental policy bill, jeopardizing Democrats’ agenda and infuriating the White House. The West Virginia senator said he could not support the sweeping bill, which includes a host of climate proposals, saying it was too expensive and could spark inflation and expand the growing federal debt.

The now-stalled bill includes a $7,500 tax credit to buyers to lower the cost of electric vehicles.

Most Ambitious Standards Ever

The mileage rules being announced Monday are the most ambitious tailpipe pollution standards ever set for passenger cars and light trucks. The standards raise mileage goals set by the Trump administration that would achieve only 32 miles per gallon in 2026. Biden had set a goal of 38 miles per gallon in August.

The EPA said the rule would not only slow climate change, but also improve public health by reducing air pollution and lower costs for drivers through improved fuel efficiency.

Biden has set a goal of cutting U.S. greenhouse gas emissions by at least half by 2030 as he pushes a history-making shift in the U.S. from internal combustion engines to battery-powered vehicles.

He has urged that components needed to make that sweeping change — from batteries to semiconductors — be made in the United States, too, aiming for both industry and union support for the environmental effort, with the promise of new jobs and billions in federal electric vehicle investments.

While ambitious, the new standards provide adequate lead time for auto manufacturers to comply at reasonable costs, the administration said. EPA’s analysis shows the industry can comply with the final standards with modest increases in the numbers of electric vehicles entering the fleet.

Auto makers continue to invest in and develop zero-emissions vehicles to meet rising consumer demand, while making public commitments to build these vehicles in the future, the EPA said. As tailpipe-pollution standards get stronger over four years, sales of EVs and plug-in hybrid vehicles will more than double, the administration projected.

Automakers are “committed to achieving a cleaner, safer, and smarter future,” but EPA’s final rule for greenhouse gas emissions is more aggressive than originally proposed, “requiring a substantial increase in electric vehicle sales, well above the 4% of all light-duty sales today,” said John Bozzella, president and CEO of the Alliance for Automotive Innovation. The group represents manufacturers producing nearly 99% of new cars and light trucks sold in the U.S.

“Achieving the goals of this final rule will undoubtedly require enactment of supportive governmental policies – including consumer incentives … and support for U.S. manufacturing and supply chain development,” Bozella said in a statement.

EPA called the new rule critical to address climate change. Transportation is the single largest source of greenhouse gas emissions in the United States, making up 29% of all emissions. Within the transportation sector, passenger cars and trucks are the largest contributor, accounting for 58% of all transportation-related emissions and 17% of overall U.S. carbon emissions.

The final standards will contribute toward a goal set by the 2015 Paris climate agreement to keep the increase in the global average temperature to well below 2° Celsius above pre-industrial levels, the EPA said. The U.S. rejoined the Paris agreement on Biden’s first day in office after former President Donald Trump had withdrawn the U.S. from the global pact.