A jury has convicted Jeremy Kechloian, 47, in the 2018 stabbing murder of an employee at the Visalia Kmart store. (Shutterstock)
Share with friends

A jury has convicted Jeremy Kechloian, 47, in the 2018 murder of a man at the Visalia Kmart store, the Tulare County District Attorney’s Office said in a news release Wednesday. 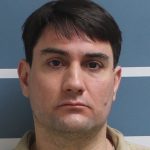 A separate jury also found the Visalia man guilty of assaulting law-enforcement officers while being processed at the Visalia Police Department and again while being held in jail on murder charges.

According to prosecutors, Kechloian entered the store with a knife visible in his back pocket.

After the store’s loss prevention officer escorted Kechloian out of the store, he stabbed the employee in the neck and chest. The victim died two days later.

Kechloian was convicted of assault with a deadly weapon in 2009 and has several other felony convictions, according to court records.

He faces 68 years, 8 months-to-life in prison when he is sentenced later this month.