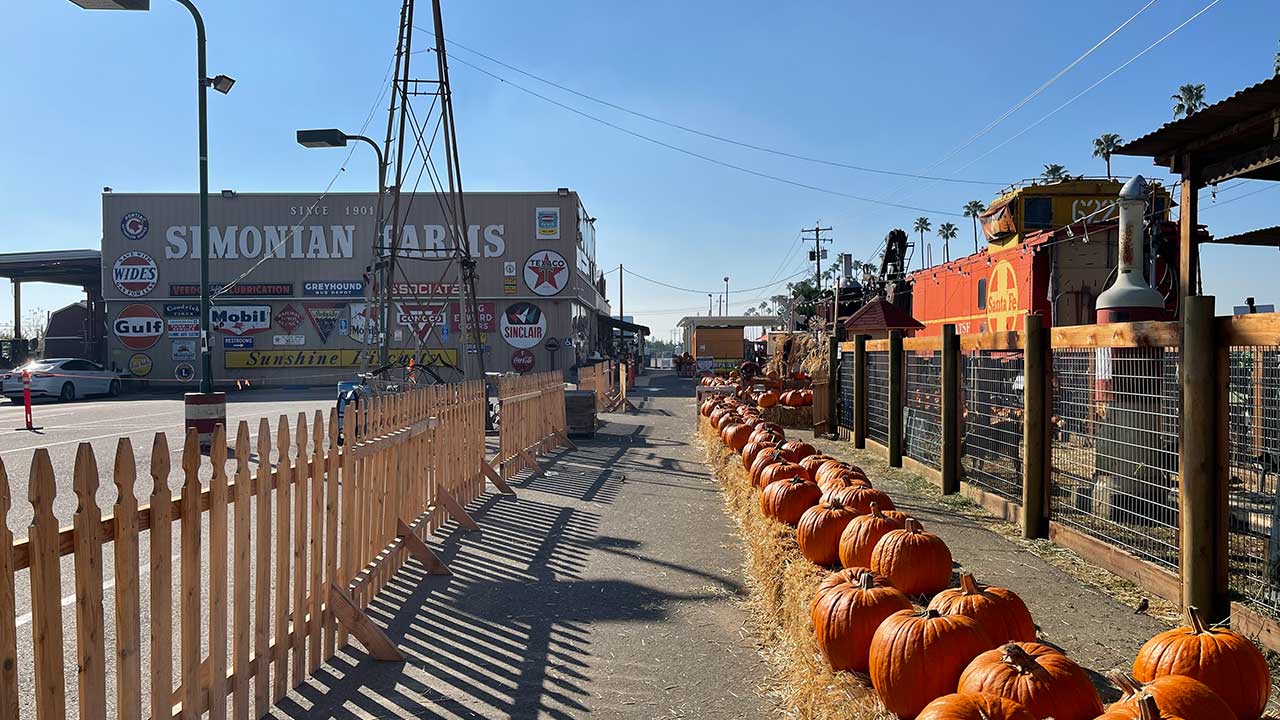 Fresno business, Simonian Farms says there will be a shortage of Christmas trees this year, and advises the public to start shopping early. (GV Wire/Liz Juarez)
Share with friends

In the same way that the COVID-19 strain made its way to every corner of the world, the pandemic-induced broken supply chain has landed right here in Fresno.

Trade delays, transport costs, and labor strains are creating shortages and headaches seemingly of every kind.

There are shortages of everything from soda to clothes to new cars you can drive off the lot.

Consumers now must think ahead and anticipate what they might need a month or two months from now.

“If you see it, buy it!” is already the rule of thumb for holiday gift-buying and decorations.

Get Your Christmas Tree Early

Bonnie Simonian, who has co-owned Simonian Farms in Fresno for decades, recommends buying Christmas trees early this year — as soon as Thanksgiving weekend. That’s because of climate change.

“It won’t just be a reality for this year, it will be a reality for years to come. We will have a lower number, that’s the sad reality, and we’re not sure right now what they are going to provide us with. We know we’re going to get (Christmas tree) shortages as well as every other entity who carries trees.” — Bonnie Simonian, co-owner, Simonian Farms

Climate change is affecting some fruits and vegetables. For example, pumpkins grown in the Valley are smaller because of the sizzling summer heat and smoke from nearby Sierra wildfires.

“This year was hot, every day hot, we got the drip irrigation on these pumpkins all summer long daily, but as far as the pumpkins are concerned —the leaves got the intense heat and they didn’t get very big so they couldn’t shade the pumpkin,” says Madera farmer Alex Lehman. “The other part of it was, we had smoke that settled in this Valley.”

And, furniture buying has become a game of wait-and-see game — and sticker shock — for many Fresno residents.

The manager of a major Fresno furniture retailer says that the store has had to change its prices at least once or twice a month since the pandemic began. In addition, supply chain issues have forced the store to delay deliveries to customers.

“We have people calling angry and mad,” said the store manager who asked that his name not be used. “We’ve had to call, I’m going to say at least a thousand customers in the last six months to tell them their stuff is going to be later than we quoted because we can’t get it.”

The Small Business Pulse Survey conducted by the U.S. Bureau found that small businesses are being hammered by supply chain problems during the pandemic.

You won’t stay in business very long if you can’t keep your customers happy. So, finding new suppliers and offering new products is essential to survival.

For example, the manager of the Fresno retail furniture giant says they’ve switched to more American products. Now in stock: twice as many offerings of Amish-made furniture. And, the company is trying to build relationships with more U.S. furniture makers.

Time is money, and the retailer can’t afford to have sofas, bedroom sets, and wall units sitting in a shipping container for weeks on a dock in Long Beach.

However, even furniture assembled in the U.S. is subject to delays.

“Let’s say, for example, it’s an American-made sofa, but the leg is imported, but if they’re waiting for a leg to come from a dock, you know, from overseas, they can’t send you the sofa because they don’t have the leg,” said the store manager.

What Is In Short Supply?

Food items are only some of the few shortages currently cropping up; others have been in short supply throughout the pandemic.

A report by 60 Minutes that aired in August explained there’s a 75% shortage of semiconductors or microchips used to power everyday modern devices.

These chips are mostly manufactured in Asia and affect the production of new cars, computers, phones, and other electronics.

The new CEO for Intel, Pat Gelsinger, stated that 25 years ago, the U.S. produced 37% of the world’s semiconductor manufacturing. Today, it’s just 12%.

Lehman’s family has been farming pomegranates in Madera for generations. During the year, Lehman and his wife, once public school educators open up their family farm, Home Grown Cellars, to the public.

They offer seasonal attractions by hosting educational farming tours for schools, a sunflower maze for photo ops, apple picking, and a pumpkin patch in the fall.

This year, however, there was a shortage of apples. The almonds and pomegranates were smaller, as were the pumpkins that end up as Halloween jack-o-lanterns.

The excessive heat and smoke from wildfires hurt many of Lehman’s crops. He said that he ended up having to lower his prices due to their size.

“Between the heat and the smoke, we got what we got, and so the people that came out, I basically told the folks on Saturdays — no bulk buying because what we have out there is not what we like to see.”

Simonian hosts a pumpkin patch every year along with a Christmas tree farm. She says that summer’s excessive heat in Oregon — the nation’s largest supplier of Christmas trees — resulted in a 25%  to 30% tree loss. That will trickle down to consumers in the form of higher prices.

“It won’t just be a reality for this year, it will be a reality for years to come,” said Simonian. “We will have a lower number, that’s the sad reality, and we’re not sure right now what they are going to provide us with. We know we’re going to get shortages as well as every other entity who carries trees.”

Despite the challenges brought on by climate change, Lehman and Simonian say they remain optimistic by doing the best thing they can: keep prices as low as possible and inform the public about what’s going on. 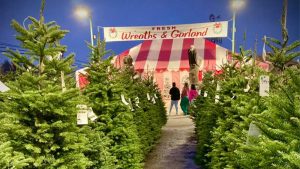 In the last few weeks, loaded cargo ships have been seen sitting off the coast of Los Angeles and other ports around the country. That prompted President Joe Biden to try to come up with a fix.

“You might be wondering if the (holiday) gifts you plan to buy will arrive on time,” said Biden. “Well let me explain, supply chains initially mean how we make things and how the material and parts get delivered to a factory, so we can manufacture things and manufacture them here. How we move things, how a finished product moves from a factory to the store to your home.”

Biden’s solution was making the port of Los Angeles operational 24 hours a day, seven days a week, while also promising to work with UPS, FedEx, and retailers to extend their hours.

However, the problem isn’t limited to the docks. Prices have risen sharply for shipping the containers that hold the goods and products most Americans are used to seeing in their retail stores and grocery aisles.

Reuters reports that shipping rates from China to the United States have skyrocketed to above $20,000 per 40-foot box. Normally, the rate is about $3,000.

Whether it’s a lack of port workers, shortage of trucks and truckers, the cost of shipping containers, or the closure of countries due to COVID-19, many of the products the U.S. relies on are being delayed for weeks to several months.

A manager of a small furniture store in Fresno says many of the problems are delays for small parts like nuts, bolts, and fabric.

“What used to take 30 to 60 days now takes 30 to 35 weeks, while a custom order used to take eight weeks, now takes five months,” said the store manager who asked to remain anonymous.

According to CNBC, factory shutdowns and worker shortages abound across Southeast Asia after a big COVID-19 outbreak there. The outbreak led to significant product disruptions in Vietnam, Thailand, and Malaysia.

Those countries have become more important to U.S. retailers and wholesalers because many companies moved their manufacturing plants out of China after the Trump administration imposed higher tariffs on Chinese goods.

Tax Foundation reports that the U.S. is currently imposing tariffs of 25% or 7.5% on Chinese imports totaling more than $360 billion.

Have an Opinion on Proposed West Herndon Costco? Here’s Your Chance to Weigh In.

This Large Asian Spider Has Now Made Its Way to the U.S.