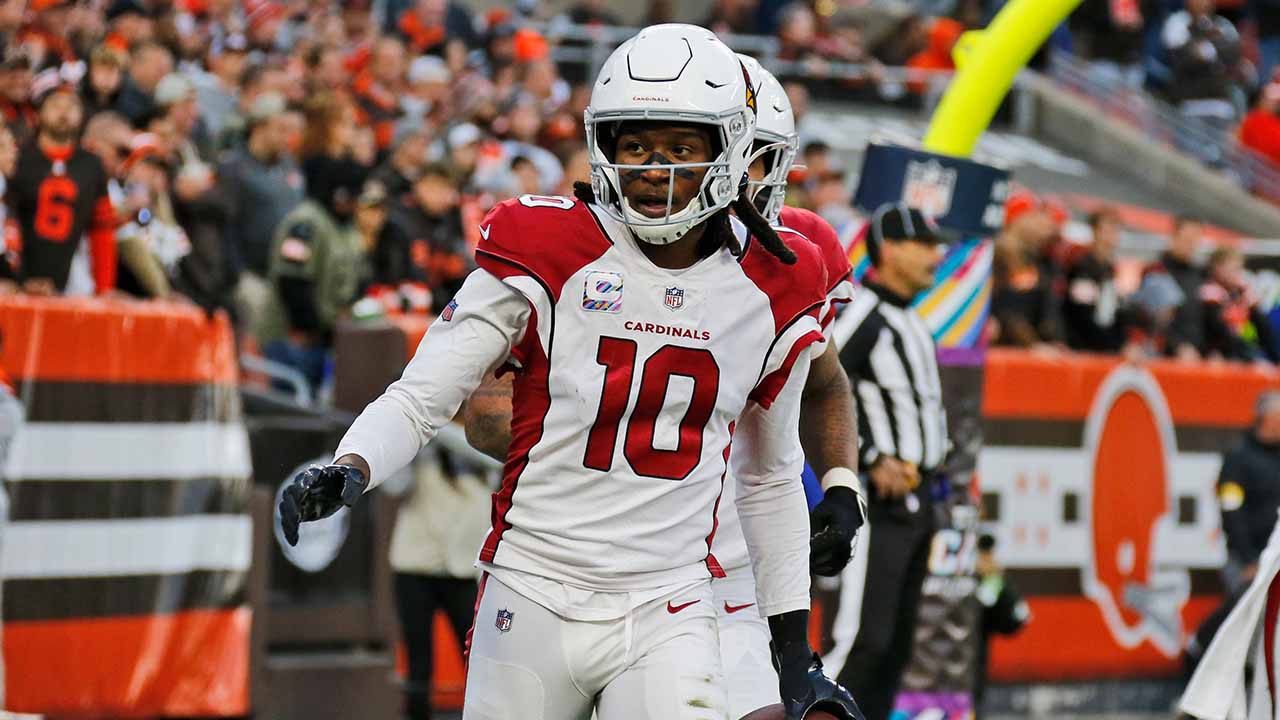 Arizona started adding pieces for QB Kyler Murray when it acquired DeAndre Hopkins in a 2020 trade with the Houston Texans. (AP File)
Share with friends

Tom Brady’s decision to team up with coach Bruce Arians in Tampa Bay has had an impact on the NFL well beyond last season’s Super Bowl victory.

The NFL is a copy-cat league, and when you look at the standings, the Bucs’ “all in” philosophy is paying off for other teams.

“Super Bowl or bust” can be heard in the locker rooms of the 7-0 Arizona Cardinals, 6-1 Los Angeles Rams, and 5-2 Tennessee Titans.

And, while the 5-2 Cincinnati Bengals aren’t in Super Bowl-or-bust mode, owner Mike Brown knocked the cobwebs off his checkbook and brought in free agents Trey Hendrickson, Chidobe Awuzie, and Mike Hilton to beef up the defense at a combined cost of nearly $106 million — $29.5 million guaranteed.

Super Bowl or Bust Starts With a Star QB

A precondition to going all-in is having a quarterback capable of taking you to the Super Bowl. Skilled veterans know who these QBs are and want to be their teammates.

Thus, Arizona now has wide receivers DeAndre Hopkins and A.J Green, and tight end Zac Ertz, who had a 47-yard TD reception in his first game after coming in a trade from Philadelphia.

Just as Tampa Bay couldn’t have assembled the roster it did without Brady, the Cardinals’ success reflects the eagerness of veterans to play with QB Kyler Murray and the front office’s savvy acquisition of older players with something left in the tank.

Draft Capital Is Meaningless to These Teams

A quarterback’s importance is further illuminated by the Rams’ trade for Matt Stafford in exchange for two first-round draft picks, a third-round selection, and QB Jared Goff. The Rams already had shown their faith in going all-in when they got cornerback Jalen Ramsey in 2019 for two first-round picks and a fourth-rounder.

Clearly, the Rams don’t believe in stockpiling “draft capital” — the path many franchises take. Some in the NFL say it’s reckless to trade away high draft picks. But coach Sean McVay believes he actually is minimizing risk by acquiring proven players and relying on Stafford’s and Ramsey’s presence to build a roster focused on immediate success.

The Titans, who started the season slowly, now also are showing how the acquisition of veterans gets a team imagining themselves in the Super Bowl. Outside linebacker Bud Dupree has amped up the Titans’ pass rush, and new wide receiver Julio Jones forces defensive coordinators to think twice about stacking the box against Derrick Henry.

All-in vs. Conventional Thinking on TNF

What about the salary cap? I learned long ago that imaginative GMs can play games with signing bonuses and reworked contracts to sneak under the limit.

Tonight, we will see a showdown of team-building philosophies when 6-1 Green Bay plays at Arizona. Despite having Aaron Rodgers at QB, the ultra-conservative Packers have chosen to build through the draft. In doing so, they’ve wasted a fantastic opportunity to go from good to great by leveraging Rodgers’ presence to fortify the roster.

With the Packers minus all-world wideout Devante Adams, Rogers will need to muster every bit of his magic to beat the talented Cardinals. 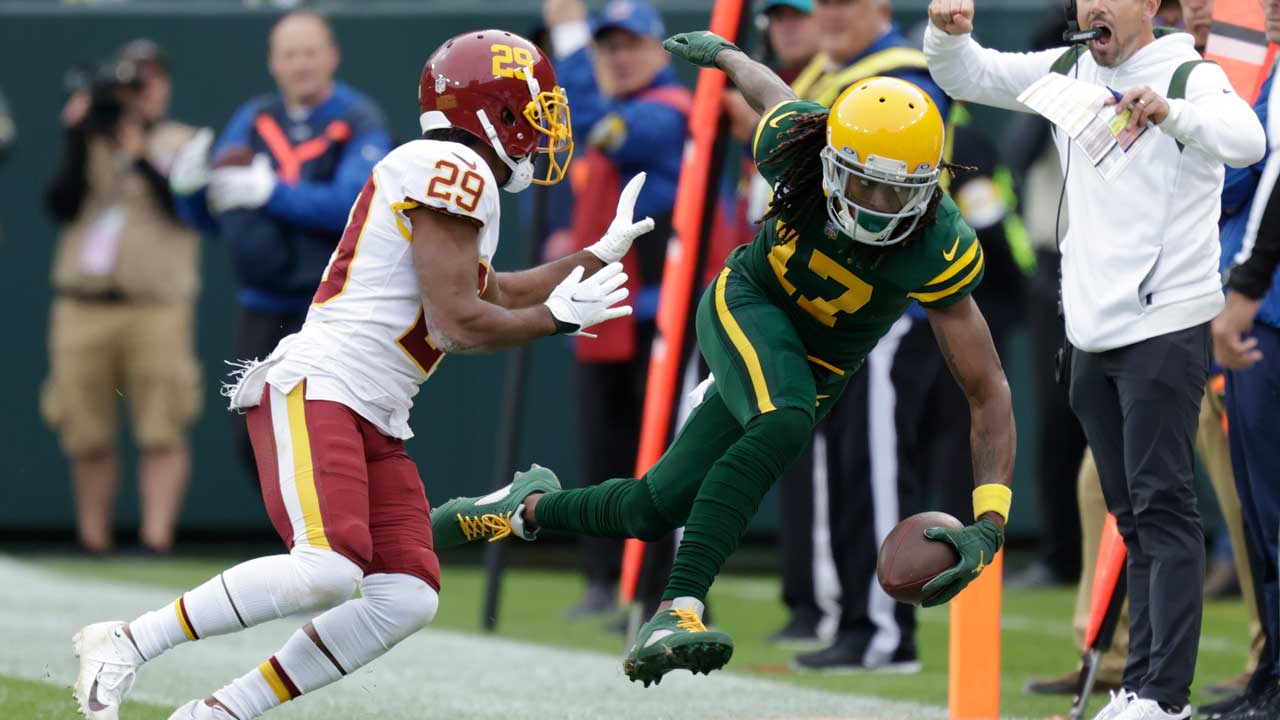 The 6-1 Packers take on the 7-0 Cardinals tonight. But the Packers will be without standout receiver Davante Adams (17) because of COVID-19 protocols. (AP File)

1. Arizona (7-0) — Thursday night’s game against the Packers is an opportunity for fans to see good the Cardinals truly are. Defying conventional wisdom about size and college experience, Arizona’s decision to select Kyler Murray at the top of the 2019 draft is paying huge returns. (Last week: No. 1)

2. Buffalo (4-2) — Coming off a loss and a bye, the Bills host the mess that is the Miami Dolphins. That’s followed by two more cupcakes, Jacksonville and the New York Jets. (Last week: No. 2)

3. Tampa Bay (6-1) —The only mistake for the Bucs during their four-game winning streak was forgetting to tell wideout Mike Evans to bring the football from Tom Brady’s 600th career TD pass back to the bench. (Last week: No. 5)

4. Dallas (5-1) — Fantasy football fans can rejoice. After a bye, the high-powered Cowboys offense returns to action at 3-3 Minnesota on Sunday night. (Last week: No. 4)

5. Los Angeles (6-1) — The Rams special teams showed up half asleep against the punchless Lions and it nearly resulted in defeat. Pretty sure the special teams will be ready for anything Houston throws at them on Sunday. (Last week: No. 3)

28. New York Jets/Giants (3-10) — The Giants finally put it all together by trampling Carolina. The news wasn’t nearly as good for the Jets, who got pounded by New England and lost QB Zach Wilson for a few weeks with an injured knee. Hopefully, this season teaches the Jets that it’s next-to-impossible to compete in the NFL with a young roster if you don’t surround them with at least a few veterans. (Last week: Jets/Giants No. 29)

30. Miami (1-6) — Assuming that Deshaun Watson can put his legal troubles behind him — a big assumption — the Dolphins should trade whatever number of draft picks are needed to get him. With Watson on any decent roster, you’re guaranteed a minimum of 10 wins a year. (Last week: 28)

31. Houston (1-6) — They’ve lost six straight since their opener. And, for the season, the Texans are surrendering more than twice as many points as they’ve scored. (Last week: No. 31)

Escaped the Bottom: None