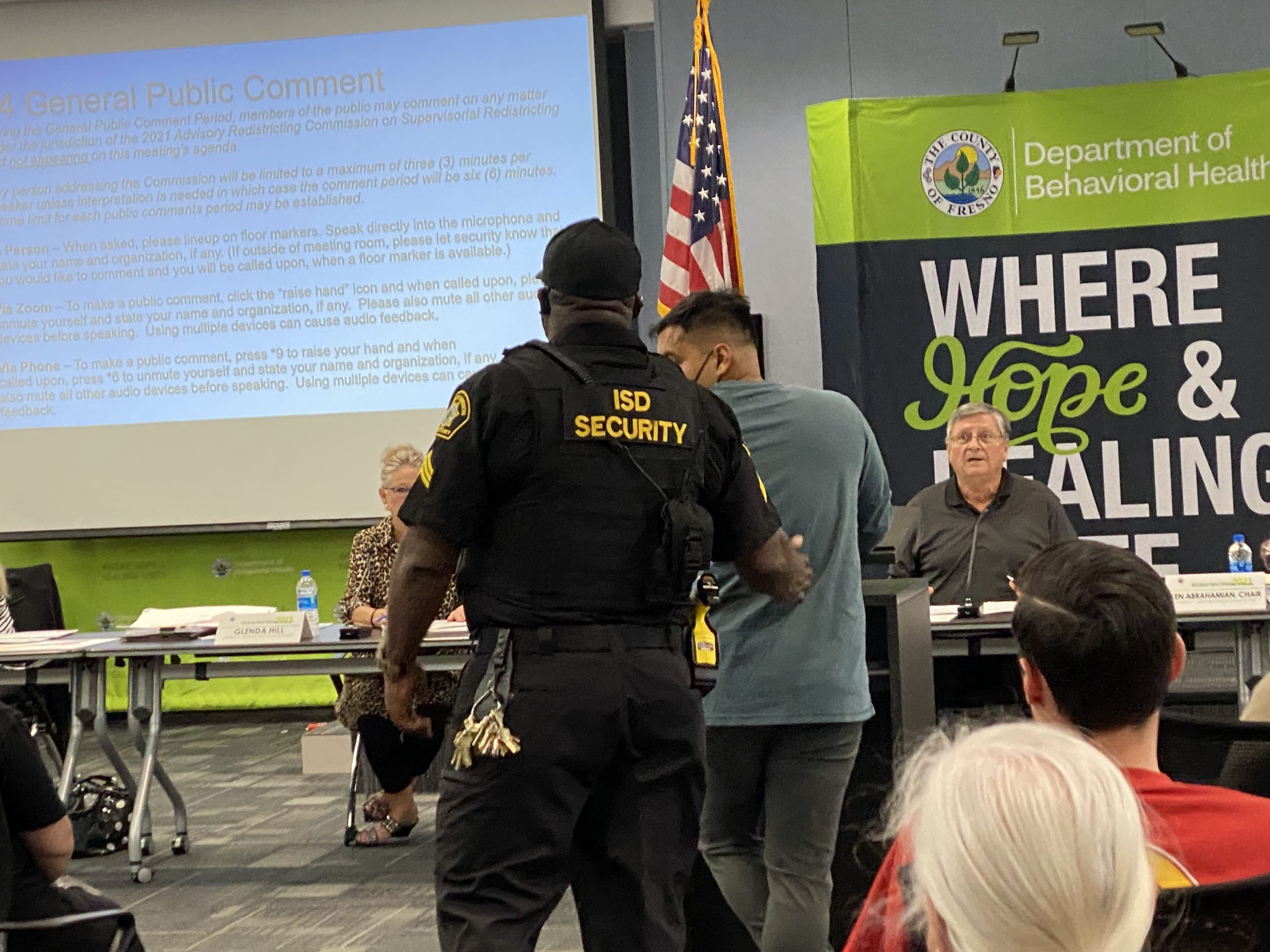 The tension was already high at Thursday night’s Fresno County redistricting meeting. Before the advisory commission picked three maps to recommend to the full Board of Supervisors, arguments broke out over public speaking time, which interpreter to use, and accusations of harassment.

After five hours and more than 40 speakers, the commission recommended three maps with redrawn electoral lines — the every-ten-year process based on the 2020 U.S. Census.

The meeting, at the Fresno Health and Wellness Center, reached its capacity limit of 40. Dozens of people had to wait in the lobby, watching the meeting on a screen.

Conservatives and the chairman of the Fresno County Republican Party favored a map presented by the Fair Representation Coalition of Fresno County. It mainly kept current election lines in place.

Several others, including volunteers from the Dolores Huerta Foundation, advocated for another map that would drastically change the current lines — including drawing current supervisors Buddy Mendes and Sal Quintero out of their districts.

Related Story: Will Fresno Supervisor Be Drawn Out of His Own Electoral District? See ...

During public comment, the two groups accused the other of presenting a partisan map.

The nine members of the commission (two were absent) chose the conservative-preferred map (Map 101, see below), rejecting the Dolores Huerta Foundation map (Map 116). 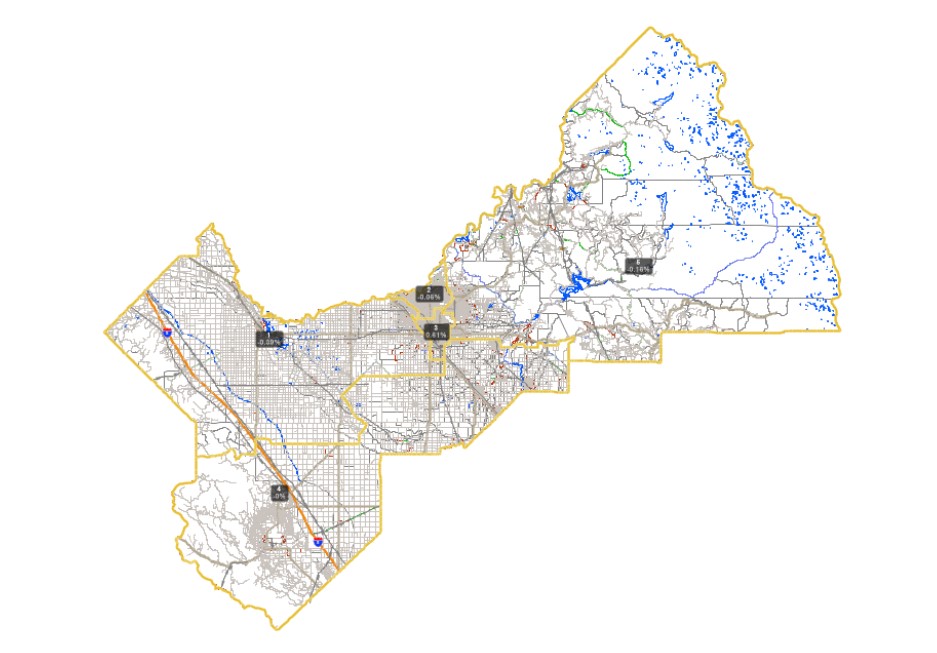 The Fair Representation Coalition map, recommended by a county commission.

After the vote, Lori Pesante, director of civic engagement with the Dolores Huerta Foundation, expressed her frustration.

“Irony runs deep in the county of Fresno,” Pesante said. “I sat in a room here tonight with many, many, many people who really focused on everything but the merits of the map.”

Before the meeting started, Dolores Huerta Foundation volunteers accused a woman of calling them names and grabbing one of their shirts. Nothing came of it.

In the meeting, others objected to the foundation providing their own interpreter. Commission chairman Ken Abrahamian allowed it.

Frequent objections revolved around who was allowed to speak during public comment. Some spoke twice, but only after others had a chance to speak once.

Security guards were present to keep the peace. At one point, a guard approached speaker Pedro Navarro Cruz of the CNC Education Fund. Cruz was speaking during general public comment, where discussing specific maps was discouraged (that discussion would take place later). Things calmed down shortly after. 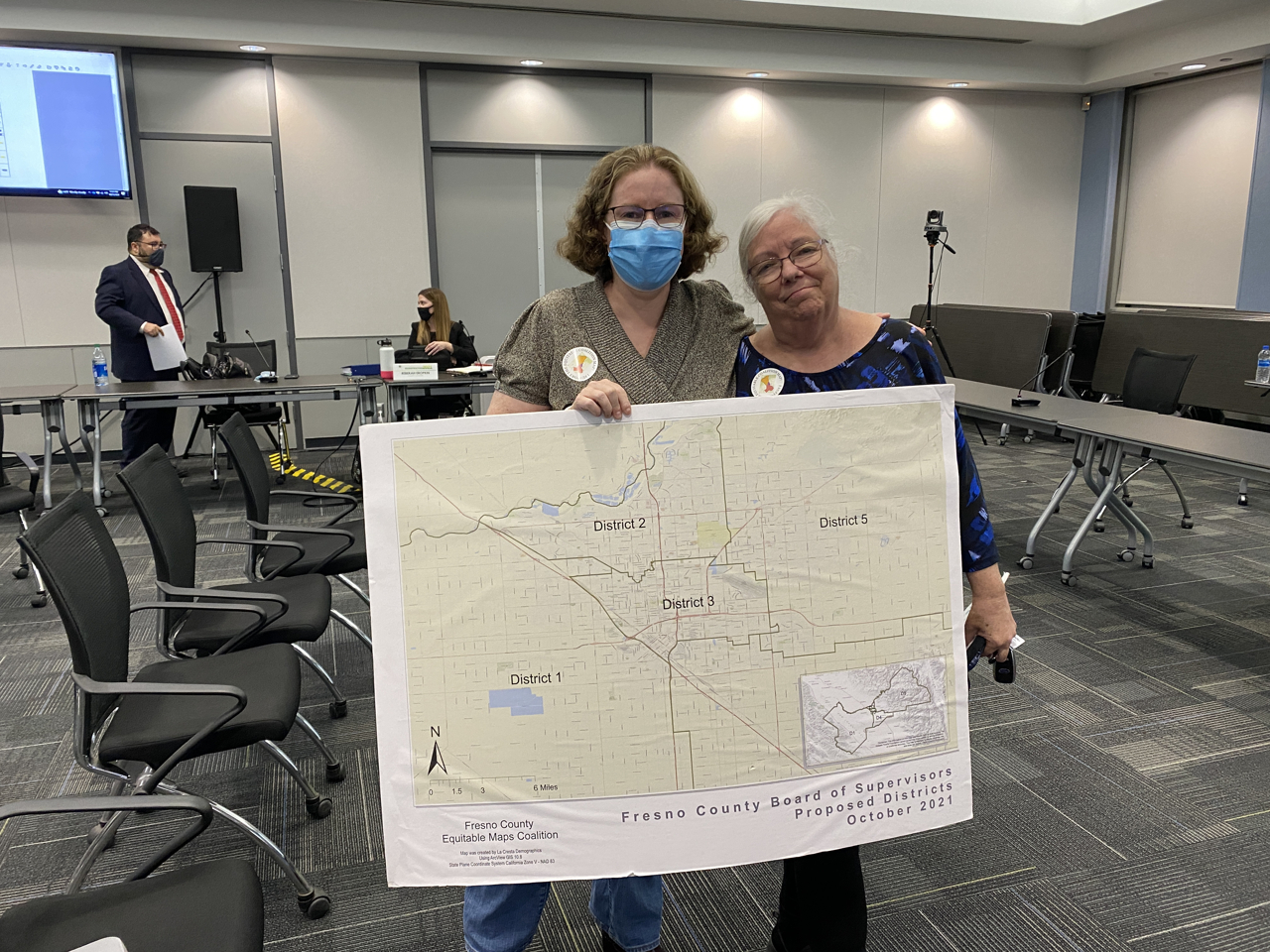 Not the Final Vote

The commission supported the Fair Representation Coalition with a 9-0 vote.

Commission members Patience Milrod and Suzanne Motte were not present.

The Board of Supervisors will have the final vote. They can still review maps that did not receive recommendations, or review newly submitted maps.

The supervisors will hold a hearing Nov. 2 at 1 p.m., with a preliminary vote possible on Nov. 16. The absolute deadline is Dec. 15.

A water main break three years ago is the latest source of friction between the county and city of Fresno.

The ensuing flood on Oct. 17, 2018 ruined a county Department of Public Health laboratory. A county spokeswoman says the break created 4-6 feet of water and mud. Damages are estimated between $10-14 million.

Last week, the county and its insurance carrier Lexington Insurance Company filed a lawsuit. On Tuesday, the Board of Supervisors voted, 5-0, to ratify the filing.

The lab was only open 9 months in the basement of the Brix-Mercer Building at 1221 Fulton Avenue. The county set up a new lab location at the Hamilton Avenue yard.

The city did not respond to GV Wire’s request for comment.

Fresno Mayor Jerry Dyer is endorsing a state proposition to spend sports gambling money on the homeless. He joined several California mayors in supporting the initiative that will appear on the ballot in November 2022.

Proponents say it will raised hundreds of millions annually for homelessness and mental health services. Money will be raised by regulating impending online sports betting.

“We need to think both creatively and long term to address California’s homelessness crisis,” Dyer said in a news release. “This initiative helps do that by generating hundreds of millions of dollars in badly needed revenue — without raising taxes on residents. Here in Fresno, and in communities across the state who are looking for ways to house their most vulnerable residents, this ongoing revenue stream will help us craft the critical long-term solutions needed to end homelessness.”

On Monday, Huerta appeared in Bakersfield alongside Rudy Salas, D-Bakersfield, as the assemblyman announced his run for Congress. Salas joined a crowded race, running against David Valadao.

Because Salas does not echo the Sunrise Movement’s goals on climate change, they criticized Salas on Twitter.

“Soooooo I wouldn’t have guessed that Dolores would pick a pro-oil Dem to endorse. Especially given how farmworkers are exposed to the harshest climate impacts due largely in part to climate denying Big Oil lobby,” tweeted Pedro Hernandez, hub coordinator for the Sunrise Movement’s Fresno chapter.

“And I get DH is a saint to a lot of y’all but when it comes to policy decisions and supporting politicians that harm their constituents, this type of endorsement should be fully interrogated and questioned,” Hernandez continued in a Twitter stream.

In more Sunrise Movement controversy, the Washington, DC chapter faces accusations of antisemitism. The group is refusing to participate in a statehood for DC march because Jewish groups that support Israel are also participating.

And I get DH is a saint to a lot of y’all but when it comes to policy decisions and supporting politicians that harm their constituents, this type of endorsement should be fully interrogated and questioned.

What trade off or clout is ever worth people’s lives? I don’t get it. 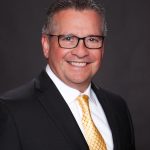 Longtime city of Clovis administrator John Holt will take over as city manager. Holt will replace the retiring Luke Serpa in January, a promotion approved by a 5-0 city council vote.

“To be honest, I feel like I just won the lottery. I am being entrusted to be the City Manager for what I would argue is the best city in California,” Holt said in a news release.

Holt has worked for the city for 21 years, currently in the role of assistant city manager.