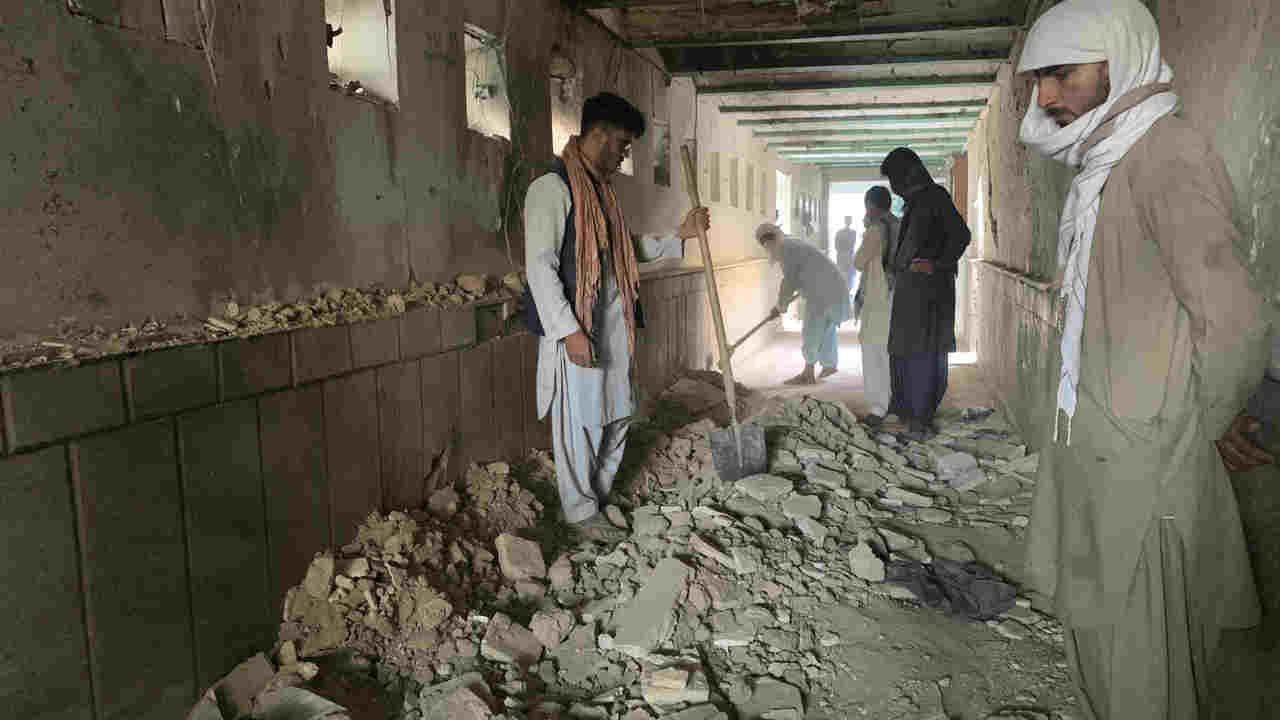 People inspect the inside of a mosque following a suicide bombers attack in Kandahar on Friday, Oct. 15, 2021. official and a witness. (AP/Sidiqullah Khan)
Share with friends

There was no immediate claim of responsibility for the carnage at the Fatimiya mosque in Kandahar province. The attack came a week after a bombing claimed by the local Islamic State affiliate killed 46 people at a Shiite mosque in northern Afghanistan.

The sectarian bloodletting has raised fears that IS — an enemy of both the Taliban and the West — is expanding its foothold in Afghanistan.

Hafiz Sayeed, the Taliban’s chief for Kandahar’s department of culture and information, said 47 people had been killed and at least 70 wounded in the attack.

Murtaza, a worshipper who like many Afghans goes by one name, said he was inside the mosque during the attack and reported four explosions: two outside and two inside. He said Friday prayers at the mosque typically draw hundreds of people.

Another witness, also named Murtaza, was in charge of security at the mosque and said he saw two bombers. He said one detonated explosives outside the gate, and the other was already among the worshippers inside the mosque.

He said the mosque’s security personnel shot another suspected attacker outside.

Video footage showed bodies scattered across bloodstained carpets, with survivors walking around in a daze or crying out in anguish.

No One Is Safe in Afghanistan, Shiites Say

The Shiite Assembly of Ahl al-Bayt, a global religious society, condemned the attack in Kandahar, accusing the security forces in Afghanistan of being “incapable” of addressing such assaults.

The Islamic State group, which like Afghanistan’s ruling Taliban is made up of Sunni Muslims, views Shiite Muslims as apostates deserving of death.

IS has claimed a number of deadly bombings across the country since the Taliban seized power in August amid the withdrawal of U.S. forces. The group has also targeted Taliban fighters in smaller attacks.

If the attack was carried out by IS, it would be the first major assault by the extremist group in southern Afghanistan since the U.S. departure enabled the Taliban to consolidate control of the country. Recent attacks in the north, the east and the Afghan capital have cast doubt on the Taliban’s ability to counter the threat posed by IS.

Neighboring Pakistan, which has urged world leaders to work with the ruling Taliban, condemned the “despicable attacks on places of worship” in a statement from its foreign ministry.

The Taliban have pledged to restore peace and security after decades of war and have also given the U.S. assurances that they will not allow the country to be used as a base for launching extremist attacks on other countries.

The Taliban have pledged, too, to protect Afghanistan’s Shiite minority, which was persecuted during the last period of Taliban rule, in the 1990s.

Both the Taliban and IS adhere to a rigid interpretation of Islamic law, but IS is far more radical. It has better-known branches in Iraq and Syria.