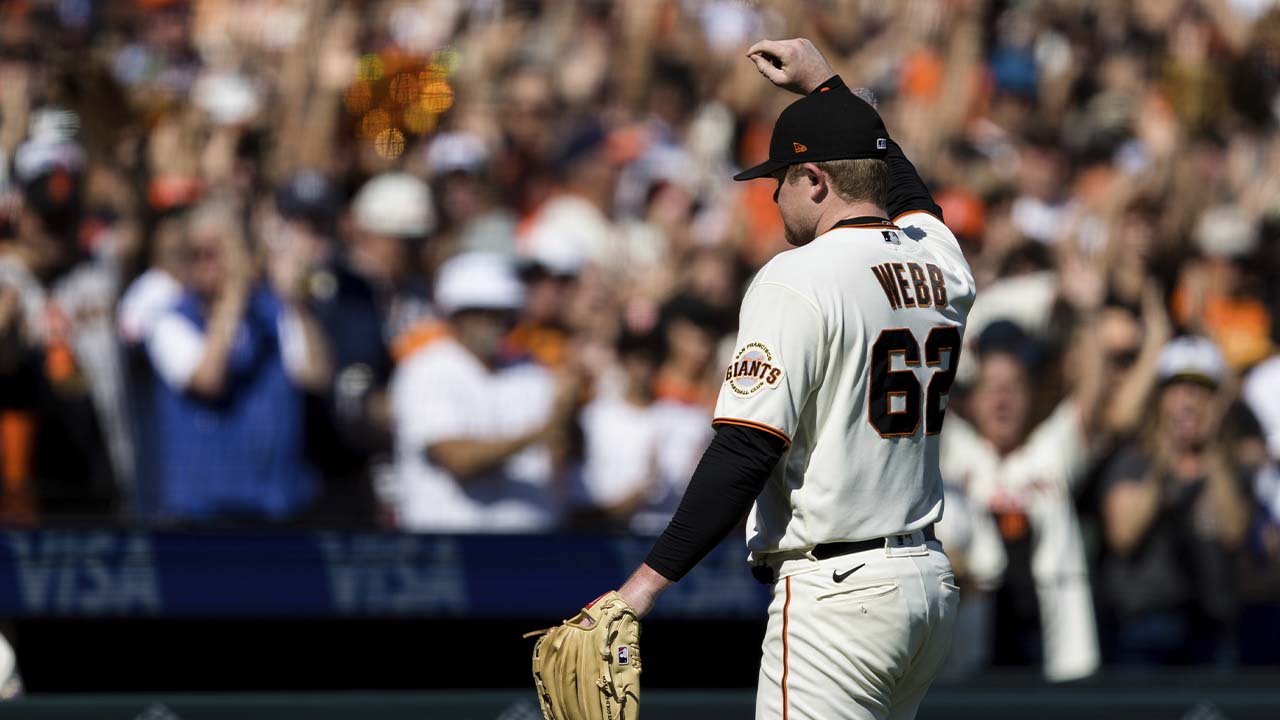 The Giants are counting on ace right-hander Logan Webb to silence the Dodgers' bats one more time. (AP File)
Share with friends

LOS ANGELES — It is only fitting that 70 years after Bobby Thomson’s “Shot Heard ‘Round the World” that the Giants and Dodgers will play in another all-or-nothing game.

Los Angeles’ 7-2 win over San Francisco on Tuesday night in Game 4 of the NL Division Series evened the series and sent the first Major League Baseball playoff matchup between teams with at least 105 wins to Game 5 Thursday night at San Francisco’s Oracle Park.

At this point, the Giants and Dodgers have each won 109 times this season. Only Thursday’s winner moves on.

“This is what baseball wants. I mean, I think, as I understand, all the series are done and so we’re going to be the only show in town. So if you have a pulse or you’re a sports fan, you better be watching Dodgers-Giants,” Los Angeles manager Dave Roberts said.

This will be the third time that two heated rivals will meet in a deciding game to see who advances. The 1951 and 1962 National League tiebreaker series both went to third games, with the Giants winning both to advance to the World Series.

This time the winner gets a date with the Atlanta Braves in the NL Championship Series. Game 1 will be Saturday night in either Atlanta or San Francisco.

Giants manager Gabe Kapler said that Logan Webb (11-3, 3.03 ERA) will get the start. The 24-year-old right-hander will be the youngest Giants pitcher to start a deciding game. The last time he posted a losing effort was on May 5.

Webb will make his fifth start this season against the Dodgers. He threw 7 2/3 shutout innings, struck out 10, and allowed only five hits in San Francisco’s 4-0 victory in Game 1.

“I’m sure it will be a lively atmosphere. It’s going to be nice to get back to Oracle and have the support of our fans. And, yeah, we’re looking forward to it,” he said.

Urias Gets the Call for the Dodgers

Roberts said before Tuesday’s game that Julio Urías will get the call in the deciding game. Urías, who led the majors in victories and was the Dodgers’ first 20-game winner since Clayton Kershaw in 2014, will face San Francisco for the seventh time this year. The left-hander allowed one run on three hits in five innings in the Dodgers’ 9-2 victory in Game 2 on Saturday.

The Giants, who won 107 games during the regular season, took 10 of the 19 regular-season meetings. That one-win edge ended up giving San Francisco its first NL West title since 2012 over the wild-card Dodgers, who won 106.

Thursday night will be this season’s 24th and final meeting.

“ I think the playbook is kind of we know each other’s playbook, so now it just goes to old school, we’re going to run the ball to the right and you’re going to have to stop us and it’s the Vince Lombardi,” Roberts said. “So it’s like we’re going to play, we know what we do, they know what we do, we know who they want to have the baseball in Game 5, they know who we want and the matchups that we’re trying to get, now it’s about going out there and executing and the best team wins.”

Kapler also echoed Roberts’ sentiments and added that they aren’t about to deviate from what they have done all season.

These two franchises that began meeting up in 1884 share a bond in these deciding games — much to the Giants’ delight.

Thomson connected for one of the most famous home runs in baseball history, a three-run drive in the bottom of the ninth inning lifted the New York Giants over Jackie Robinson and the Brooklyn Dodgers 5-4 at the Polo Grounds in 1951.

The longtime rivalry had moved from the East Coast to the West Coast when they met again in 1962 in a best-of-three matchup for the NL pennant. San Francisco beat Sandy Koufax in the opener, then lost to Los Angeles to set up another Game 3. Giants great Willie Mays delivered a key hit during a four-run rally in the ninth inning in a 6-4 win at Dodger Stadium.

At this point, they’ve each won 109 times this season. Now, it’s down to one game once more.