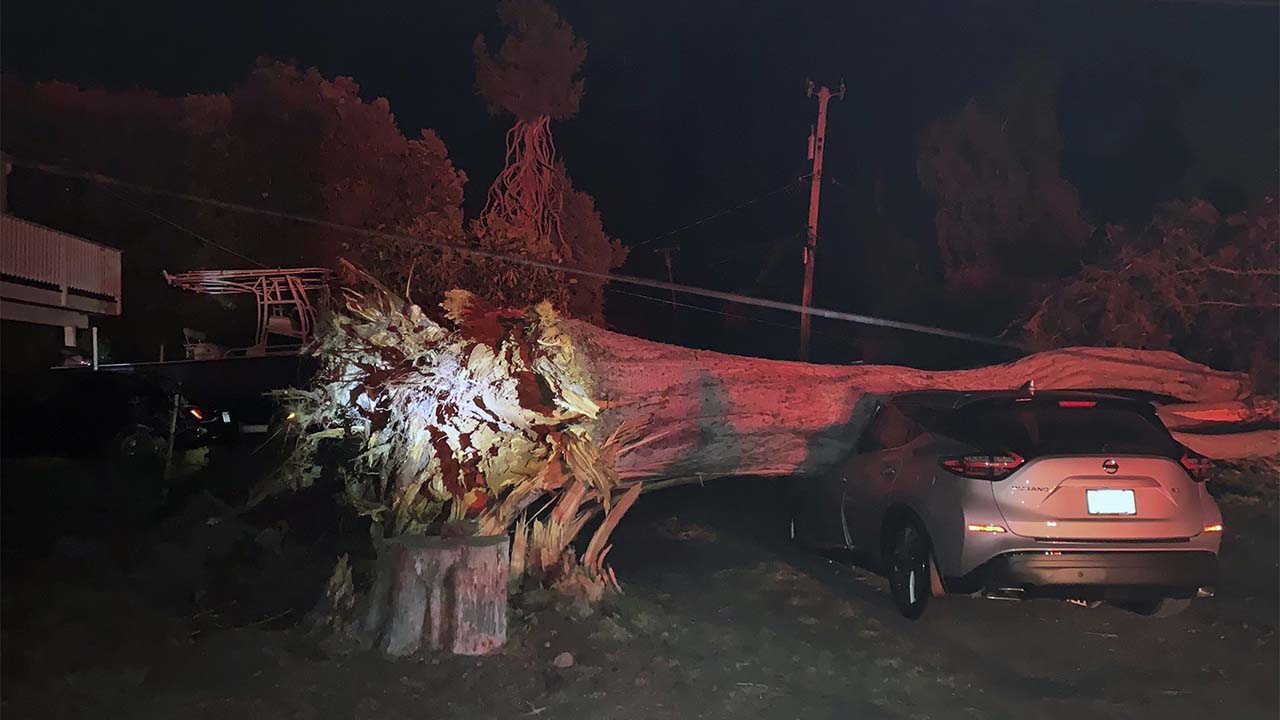 One of several vehicles damaged in the coastal area of north San Mateo County on Monday, Oct. 11, 2021. (CalFire via AP)
Share with friends

The good news is that the strong winds buffeting the Valley and the entire state will become breezes today, according to the National Weather Service.

The bad news is that more than 6,500 households in the central San Joaquin Valley still were without power as of 12:30 p.m. Thursday.

And, for some Fresno area residents, Tuesday is a day for calling their insurance agents, filling out forms, and finding someone to repair their roofs, fences, or vehicles.

Dozens of reports of #wind falling trees and branches in #Fresno this morning including this one on Ashcroft Ct. that crushed a car. pic.twitter.com/tSs222Hsn2

Wind gusts caused considerable damage across the San Joaquin Valley and throughout California on Monday. The winds whipped up wildfires, downed trees, and powered a dust storm captured by cameras high in the skies.

A PG&E spokesman said that 3,603 customers were without power in Fresno, Kings, and Tulare counties on Tuesday afternoon. Another 2,956 customers in PG&E’s Yosemite Division, which stretches from Madera County to Stanislaus County were awaiting the return of electricity.

“In Fresno, 188 of those customers are affected by a Public Safety Power Shutoff in Coalinga. They are expected to be restored by 10 p.m. tonight,” said PG&E spokesman Denny Boyles via em-mail.

“We also have two Enhanced Powerline Safety Setting outages related to the storm in Fresno affecting about 800 customers each in the Auberry and Dunlap areas. We expect those customers to be restored (at) about 4 p.m. today.”

The high winds caused the cancellation of horse racing Monday at the Big Fresno Fair out of concern for the health of the horses and jockeys. The fair also canceled some of the amusement rides on the midway.  Kearney Park closed for the day but was scheduled to reopen at 7 a.m. Tuesday.

Firefighters were sent to put out a wind-driven wildfire of 25 acres on Tollhouse Road at the Friant-Kern Canal on Monday. And, a grass fire north of Madera prompted evacuations east of Highway 99. 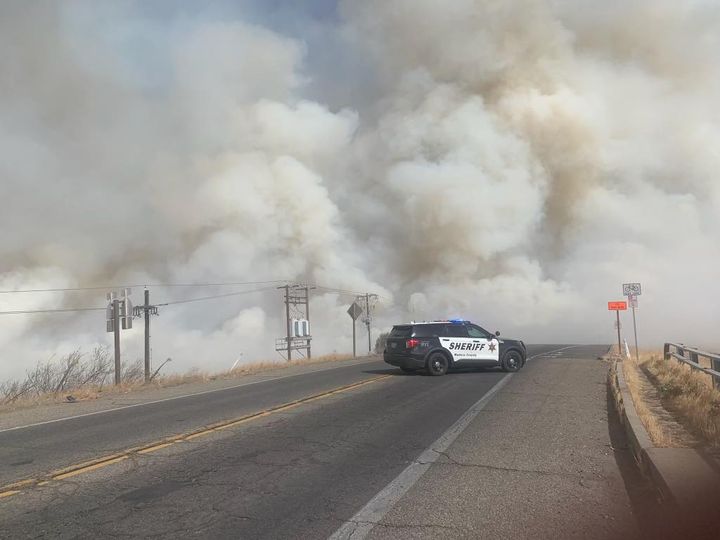 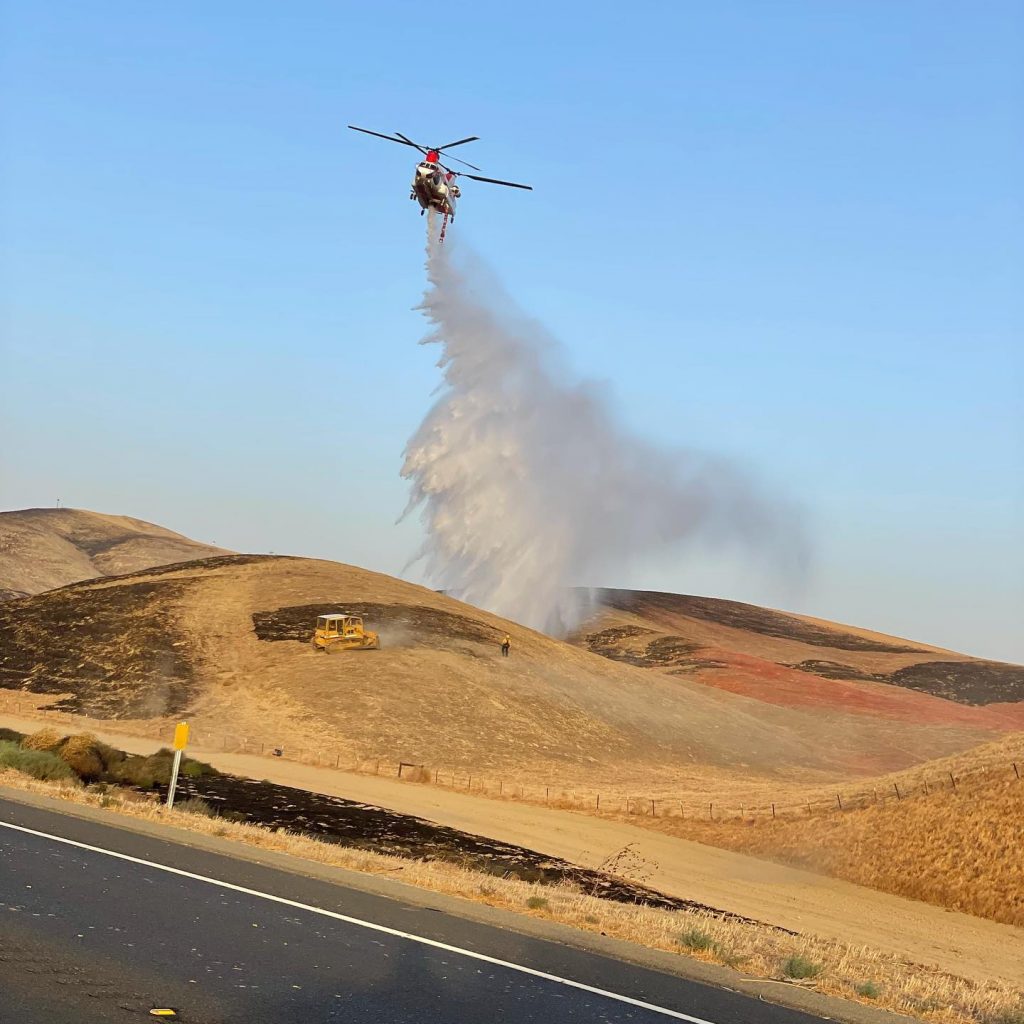 Damage Throughout the State

The winds arrived Monday as a low-pressure system moved from Oregon toward the Great Basin. Red flag warnings for critical fire danger remain in effect Tuesday for much of the interior of Northern California, with lesser wind advisories continuing in Santa Barbara County.

The injured man suffered severe third-degree burns over most of his body, Capper said.

On the south Santa Barbara County coast, the Alisal Fire had scorched more than 9 square miles by early Tuesday and remained completely uncontained.

The fire erupted Monday afternoon on a ridge and blasted down toward the ocean, forcing the closure of U.S. 101, the only major highway on that section of the coast. Evacuation orders were issued for several areas of the lightly populated region.

On Monday, a firefighter with a hand crew working on the KNP Complex blaze was struck by a falling rock. The firefighter was airlifted to a hospital and is in stable condition, fire officials said.

Rain and snow in the wildfire’s south zone aided firefighters as they continued to hold the line. As of 9:06 a.m. Tuesday, the lightning-caused wildfire spanned 87,467 acres in Sequoia-Kings Canyon National Park and was 30% contained.

As of 8:45 a.m. Tuesday, the wildfire burning in the Tule Indian Reservation and Sequoia National Forest covered 97,554 acres with 88% containment.