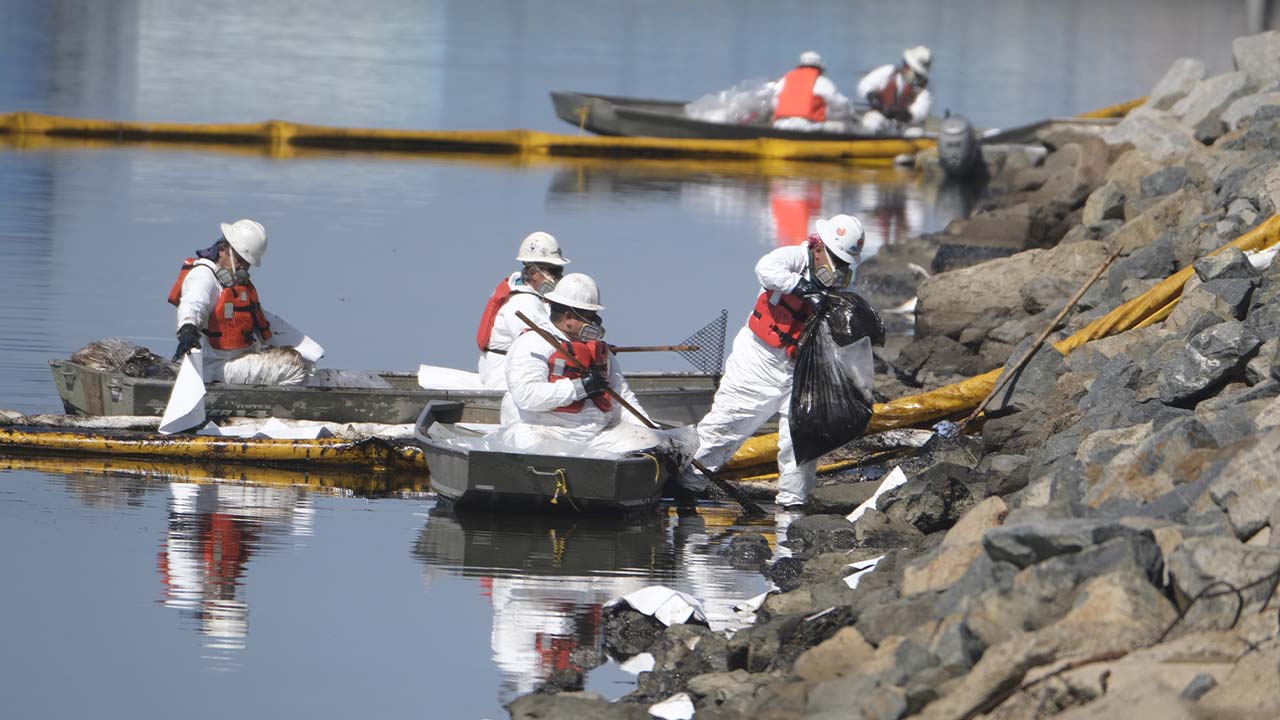 HUNTINGTON BEACH — Some residents, business owners and environmentalists questioned whether authorities reacted quickly enough to contain one of the largest oil spills in recent California history, caused by a suspected leak in an underwater pipeline that fouled the sands of famed Huntington Beach and could keep the beaches there closed for weeks or longer.

Booms were deployed on the ocean surface Sunday to try to contain the oil while divers sought to determine where and why the leak occurred. On land, there was a race to find animals harmed by the oil and to keep the spill from harming any more sensitive marshland.

People who live and work in the area said they noticed an oil sheen and a heavy petroleum smell Friday evening.

But it wasn’t until Saturday afternoon that the Coast Guard said an oil slick had been spotted and a unified command established to respond. And it took until Saturday night for the company that operates the pipeline believed responsible for the leak to shut down operations.

Rick Torgerson, owner of Blue Star Yacht Charter said on Friday evening “people were emailing, and the neighbors were asking, ‘do you smell that?’” By Saturday morning boats were returning to the marina with their hulls covered in oil, he said.

Garry Brown, president of the environmental group Orange County Coastkeeper, decried a lack of initial coordination among the Coast Guard and local officials in dealing with the spreading oil slick.

“By the time it comes to the beach, it’s done tremendous damage. Our frustration is, it could have been averted if there was a quick response,” said Brown, who lives in Huntington Beach.

‘Surf City’ Could Remain Closed for Weeks or Even Months

An estimated 126,000 gallons of heavy crude leaked into the water and some washed up on the shores of Orange County. The city and state beaches at Huntington Beach were closed, and late Sunday the city of Laguna Beach, just to the south, said its beaches also were shuttered.

Huntington Beach Mayor Kim Carr said the beaches of the community nicknamed “Surf City” could remain closed for weeks or even months. The oil created a miles-wide sheen in the ocean and washed ashore in sticky black globules.

“In a year that has been filled with incredibly challenging issues this oil spill constitutes one of the most devastating situations that our community has dealt with in decades,” Carr said. “We are doing everything in our power to protect the health and safety of our residents, our visitors and our natural habitats.”

Some birds and fish were caught in the muck and died, Orange County Supervisor Katrina Foley said. But by early afternoon Saturday the U.S. Coast Guard said so far there was just one ruddy duck that was covered in oil and receiving veterinary care. “Other reports of oiled wildlife are being investigated,” the Coast Guard said in a statement.

The state Department of Fish and Wildlife warned of a “threat to public health” from consuming any fish and shellfish taken from near the shoreline from Huntington Beach about 20 miles south to Dana Point.

The leaking pipeline connects to an oil production platform named Elly, which in turn is connected by a walkway to a drilling platform named Ellen. Those two platforms and another nearby platform are in federal waters and owned by Amplify Energy Corp.

Elly began operating in 1980 in an area called the Beta Field. Oil pulled from beneath the ocean and processed by Elly is taken by the pipeline to Long Beach.

Amplify CEO Martyn Willsher said the pipeline and three platforms were shut down Saturday night. The 17.5-mile pipeline that is 80 to 100 feet below the surface was suctioned out so no more oil would spill while the location of the leak was being investigated.

Crews led by the Coast Guard-deployed skimmers laid some 3,700 feet of floating barriers known as booms to try to stop more oil from seeping into areas including Talbert Marsh, a 25-acre wetland officials said.

A petroleum stench permeated the air throughout the area. “You get the taste in the mouth just from the vapors in the air,” Foley said.

The oil will likely continue to wash up on the shore for several days and could affect Newport Beach and other nearby communities, officials said.

The closure included all of Huntington Beach, from the city’s north edge about 6 miles south to the Santa Ana River jetty. The shutdown came amid summerlike weather that would have brought big crowds to the wide strand for volleyball, swimming and surfing. Yellow caution tape was strung between lifeguard towers to keep people away.

Officials canceled the final day of the annual Pacific Air Show that typically draws tens of thousands of spectators to the city of about 200,000 residents south of Los Angeles. The show featured flyovers by the U.S. Navy Blue Angels and the U.S. Air Force Thunderbirds.

Huntington Beach resident David Rapchun said he’s worried about the impact of the spill on the beaches where he grew up as well as the local economy.

“For the amount of oil these things produce I don’t think it’s worth the risk,” Rapchun said. He questioned whether drilling for oil was a wise idea along some of Southern California’s most scenic beaches, noting the loss of the final day of the air show could deal a blow to the local economy.

“We need oil, but there’s always a question: Do we need it there?” he said.

History of Massive Oil Spills on the OC Coast

The spill comes three decades after a massive oil leak hit the same stretch of Orange County coast. On Feb. 7, 1990, the oil tanker American Trader ran over its anchor off Huntington Beach, spilling nearly 417,000 gallons of crude. Fish and about 3,400 birds were killed.

The area affected by the latest spill is home to threatened and endangered species, including a plump shorebird called the snowy plover, the California least tern and humpback whales.

“The coastal areas off of Southern California are just really rich for wildlife, a key biodiversity hot spot,” said Miyoko Sakashita, director of the Center for Biological Diversity’s oceans program.

The effects of an oil spill are wide-ranging, environmentalists said. Birds that get oil on their feathers can’t fly, can’t clean themselves and can’t monitor their own temperatures, Sakashita said. Whales, dolphins and other sea creatures can have trouble breathing or die after swimming through oil or breathing in toxic fumes, she said.

“The oil spill just shows how dirty and dangerous oil drilling is and oil that gets into the water. It’s impossible to clean it up so it ends up washing up on our beaches and people come into contact with it and wildlife comes in contact with it,” she said. “It has long-lasting effects on the breeding and reproduction of animals.”