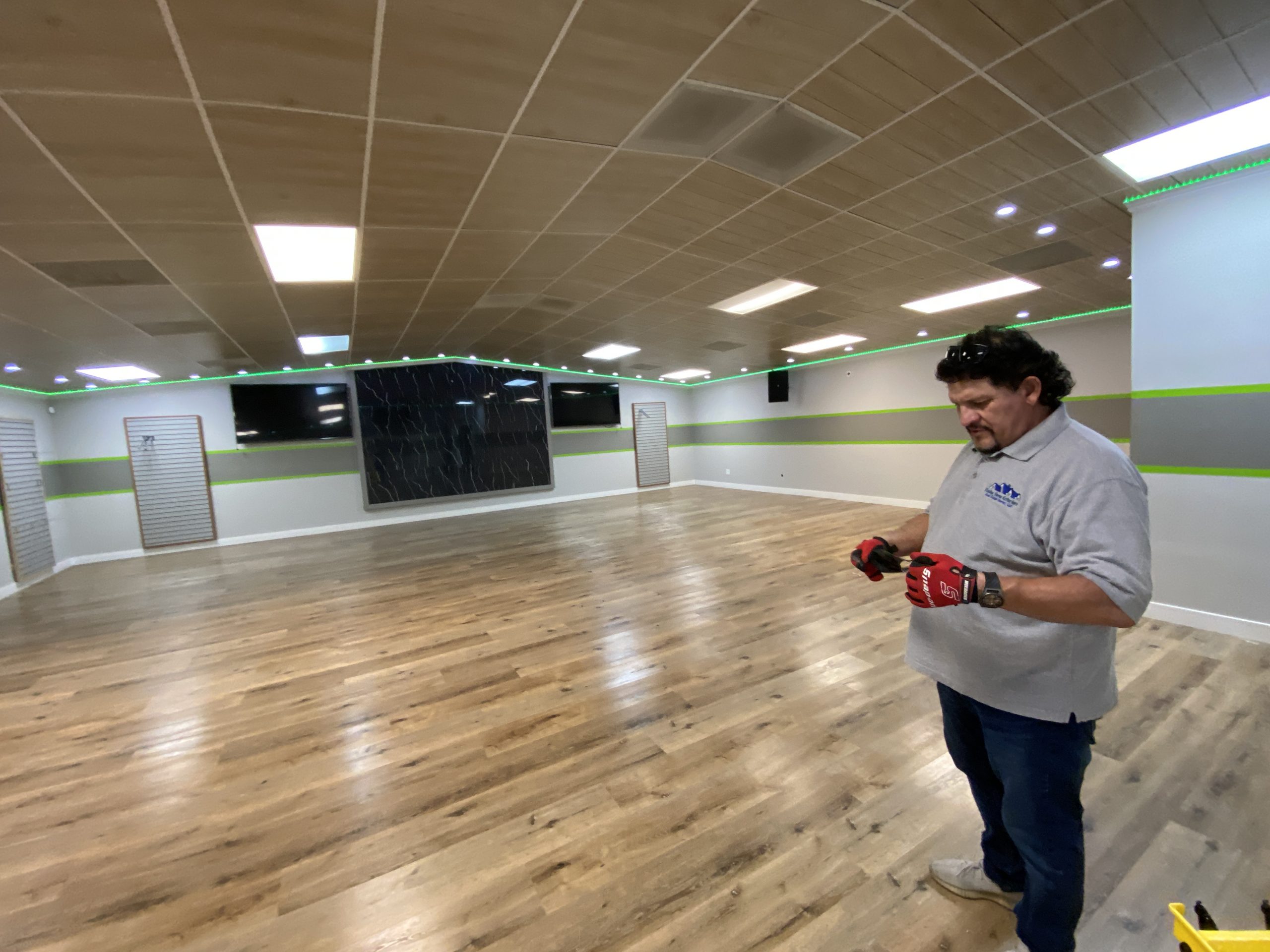 Five retail marijuana licenses are being appealed, the city of Fresno says. A yet-to-be-scheduled public hearing will determine the fate of the stores.

Two of the five appeals were filed against shops owned in partnerships by Kacey Auston, a City Hall lobbyist who also sits on several civic boards. Auston was awarded three licenses. Her stores at 7315 Blackstone Ave. (Cookies in Fresno City Council District 2) and 1264 Wishon Blvd. (Lemonade in District 1) are under challenge.

The city said the licenses were appealed by members of the city council. The city council will hear the appeals within 20 days — presumably by early October.

No License, but Construction Continues

The green doors of a building under renovation near River Park may give away its future intended use — a cannabis retail store.

Even though Eddie Rodriguez did not win a preliminary license for his Supreme Flower Rx location, he is optimistic something will fall his way.

“I got a letter from the city saying that I wasn’t counted out yet,” Rodriguez said.

The letter, sent by the city on Sept. 1, told Rodriguez “your application remains open and you may be contacted in the event a permit awardee fails to meet conditions that must be satisfied in order to obtain official issuance of a CCB Permit.”

He’s already invested $200,000 to convert a former church into a cannabis retailer.

“I’m already in that much. So I might as well keep going. I mean I’m not going to stop working,” Rodriguez said.

Rodriguez is a social equity applicant, based on a past criminal conviction for marijuana. He has his own construction renovation company.

“I got in trouble for growing marijuana back in 2000 and was sent to some prison time for it. And when I got out, it was legal. So, it was kind of a hard pill to swallow,” Rodriguez said.

The partner listed on the company’s application, Aaron Anderson, had to bow out because of health reasons, Rodriguez said.

Rodriguez said his new partners are members of the Haron family, best known for their auto dealership in downtown Fresno. GV Wire was able to verify that information. Both partners own the building.

If a license does not come his way, Rodriguez says he plans to lease or sell the building located at 81 E. Pinedale Ave. (corner of Abby Street). 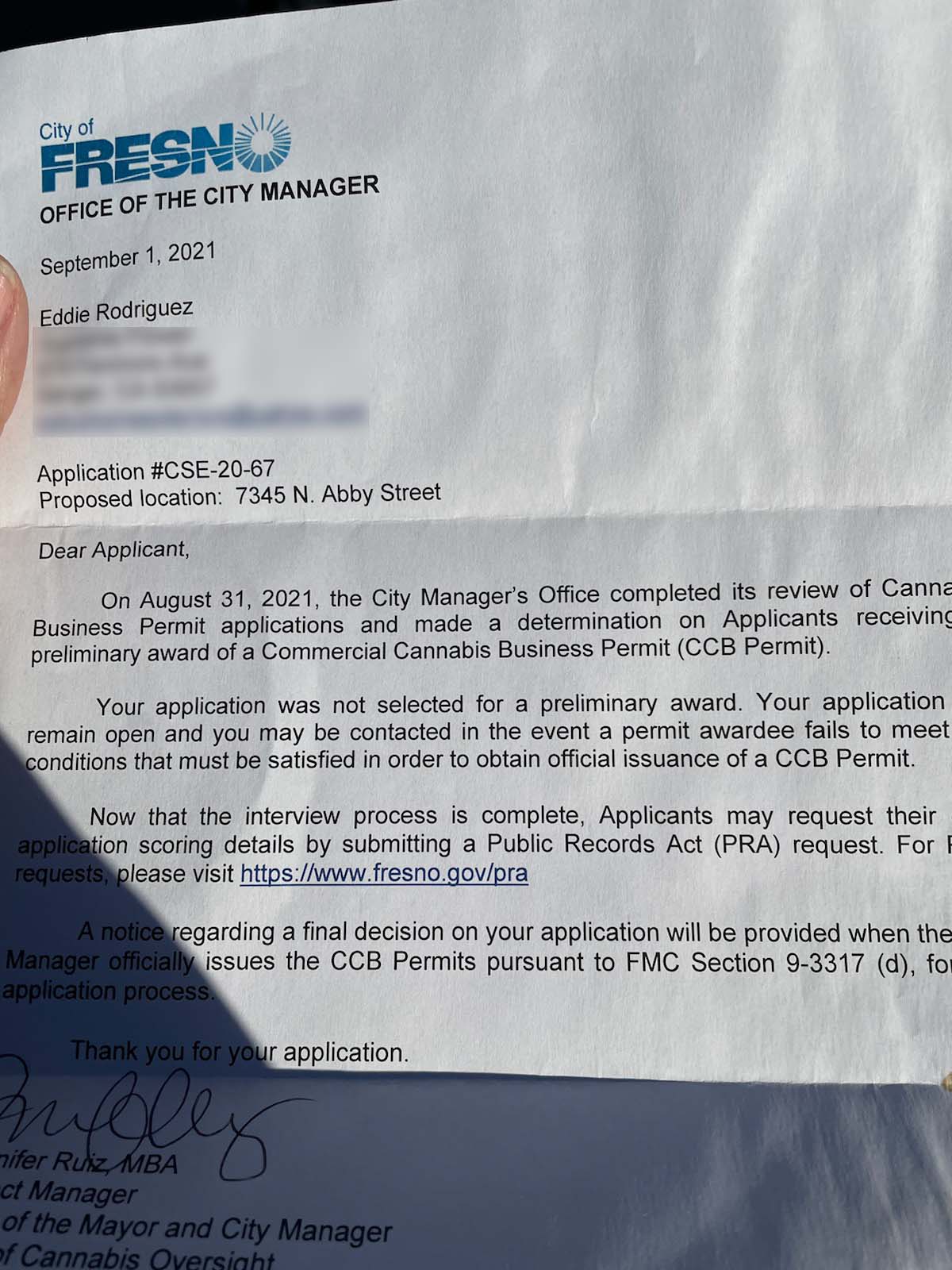 The city of Fresno sent Eddie Rodriguez a letter about possibly being back in the race for a cannabis license. (GV Wire/David Taub)

Rodriguez, without offering specifics, said the process to obtain a license was unfair.

“I don’t think I was dealt with fairly. I think something happened in the process,” Rodriguez said.

Rodriguez could only speculate whether recent news of corruption lawsuits and FBI probes at City Hall had something to do with the scoring of applicants.

“I know I got duped on this,” Rodriguez said.

The city awarded 21 licenses — 17 standard and four social equity applications. The latter have to meet economic or criminal hardship criteria and are exempt from some fees.

Three licenses are designated for each of the seven council districts.

For the standard applicants, each finalist was ranked district by district based on a scoring system. However, the top two or three finishers were not granted licenses in every case.

In a newly released list of finalists, the city explained why some did not receive licenses. In each case, it was because of proximity to another location. The city mandates at least 800 feet between cannabis stores.