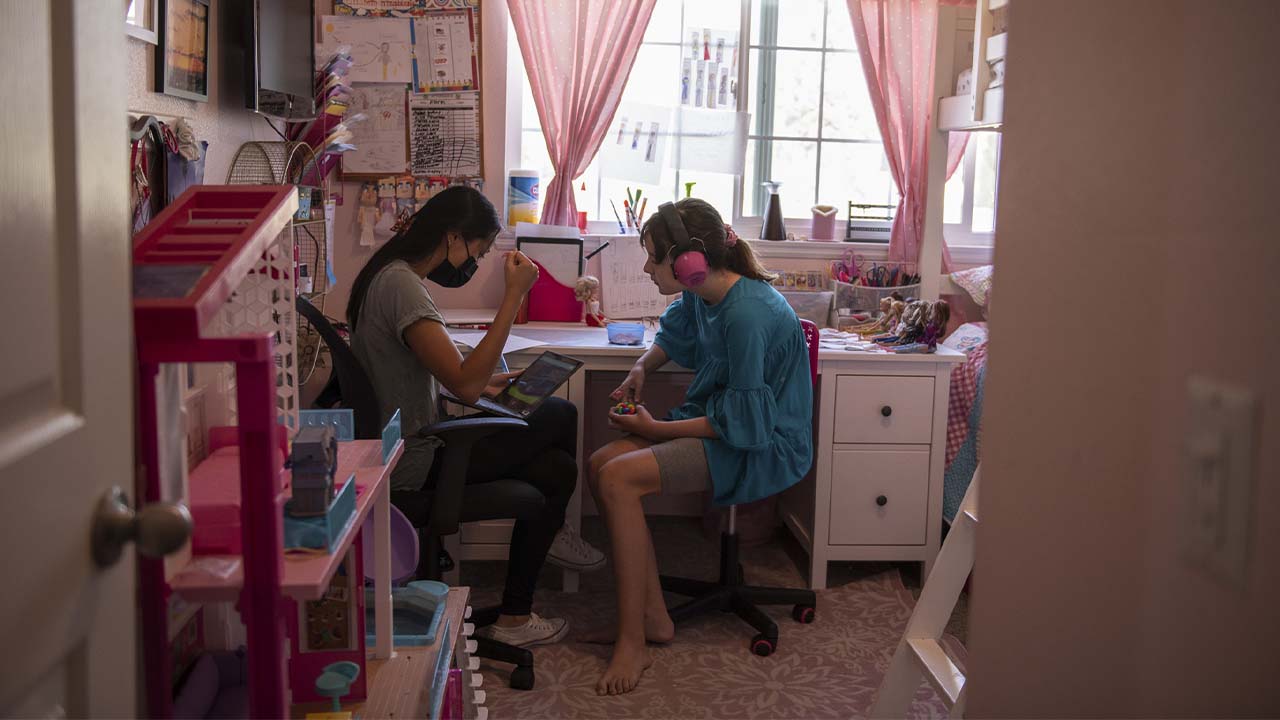 Ellie Fitzgibbons sits in her room with a behavioral therapist during class time. (CalMatters/Pablo Unzueta)
Share with friends

The school year at Duarte Unified School District, 20 miles east of Los Angeles, started a month ago, but Brady, Ellie and Jack Fitzgibbons have yet to receive any instruction from their teachers.

The 13-year-old triplets are on the autism spectrum, and their mother, Julie Fitzgibbons, didn’t feel safe sending them to school because she doubted her kids would keep their masks on all day.

“They struggle with masks. They won’t be able to be in a class with 36 kids wearing masks,” Fitzgibbons said. “Communication is important for autistic kids. They can’t talk with masks.”

But the district has delayed making accommodations for their disabilities through independent study, the only option for remote learning this year. So far, the triplets have lost four weeks of instruction.

Across the state, other parents are being placed in a similar position after more than a year of distance learning during which students with disabilities fell behind disproportionately. Meanwhile, the legislators who designed the recently passed independent study laws say this form of remote learning might not be able to accommodate all students’ needs.

This school year, with vaccines available to adults and children age 12 and older, live, in-person instruction is the expectation. Parents who want to keep their children learning virtually need to apply to their district for independent study, an option predating the pandemic primarily intended for special cases like traveling athletes or child actors.

The situation is even more complicated for parents of students with disabilities. Those parents work with districts to create what’s called an Individualized Education Program for their children. These programs aren’t set up for distance learning.

At the beginning of the school year, Fitzgibbons asked the district to place her triplets in independent study. The district, however, said virtual instruction was incompatible with the needs of the triplets and the services they require.

Some educators across the state say even if they can provide special education services through independent study, they’re wholly inadequate. 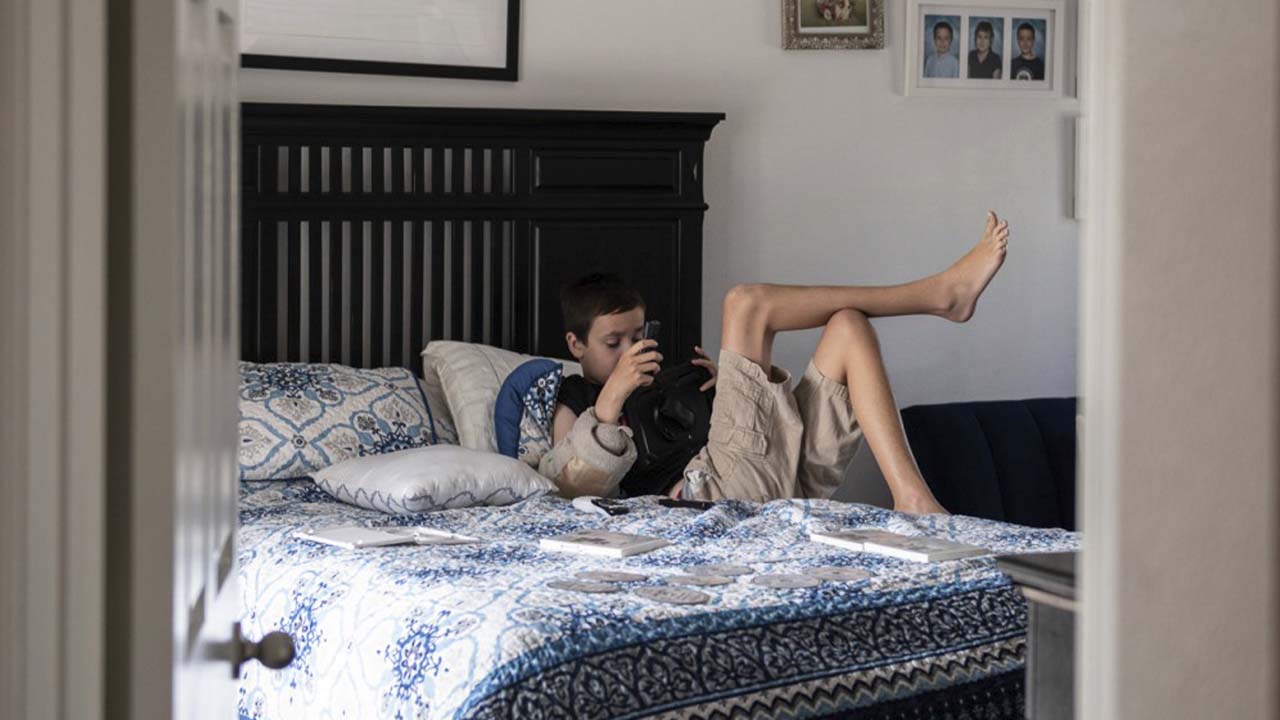 Brady Fitzgibbons takes a break from doing his schoolwork and watches educational videos on a tablet in Monrovia, on Sept. 15, 2021. “There is no way with three kids at home I could have been in all the rooms,” Julie Fitzgibbons, who expressed relief with having behavioral therapists at home, said. (CalMatters/Pablo Unzueta)

But Fitzgibbons said she was forced to decide between her kids’ safety and academic progress. If she kept her kids at home, she would have to forfeit their special education services like speech therapy, occupational therapy and extra help in the classroom. If she sent them back to campus for in-person instruction, they would be at greater risk of COVID-19.

The district and Fitzgibbons eventually reached a compromise that would allow her kids to get at least some of the services they received last year, which included six hours a day of one-on-one help and an hour a week of speech and occupational therapy. Fitzgibbons declined to provide details about the new agreement because it still needs to be approved by the Duarte Unified school board.

“Special education is so individualized. There are cases where it is an easy fit with independent study,” said district Superintendent Gordon Amerson. “There will be other cases where other options need to be discussed.”

In Northern California, Connie Nakano has three children who attend school in the Elk Grove Unified School District, about 15 miles southeast of Sacramento. Her youngest and oldest children, aged 7 and 10, are both on the autism spectrum.

Nakano opted for all of her children to be in independent study this year instead of returning them to campuses. She said she was most concerned about the spread of the Delta variant, unmasked kids sitting together for lunch and quarantines disrupting her children’s learning.

But she said her middle child, who does not have a disability, has had a much easier time in independent study.

“There are some inequities here. Parents are allowed to choose between in-person and online,” Nakano said. “However, those two options don’t translate to students who have disabilities.”

She said Elk Grove Unified denied her request for remote special education services. Nakano said she’s still negotiating with the district. In the meantime, she placed them in independent study so they don’t fall further behind. But so far, her two children on the autism spectrum are already having trouble keeping up with school.

“We’re having to make a choice between services and safety,” Nakano said.

Anne Rigali, director of special education at Elk Grove Unified, said special education has been challenging to merge with independent study. But she said the district is hoping to find creative solutions for all of their students who aren’t ready to return to campus.

“We’re working with the families to see how we can best support their child,” she said. “We’re trying to address each family and hold these conversations.”

Some Parents Want a Return to Distance Learning

While most parents across the state had a negative experience last school year, both Nakano and Fitzgibbons said distance learning worked for their kids. Last year, Nakano’s children received extra help from teachers’ aides through Zoom. Her kids also got more real-time instruction compared to this year in independent study.

Fitzgibbons said her school provided therapists who worked remotely with her triplets.

“We’re worried we’re gonna lose our service providers and our time slots,” she said. “These people have worked with our kids for 20 months now. Our kids did really well with distance learning.” 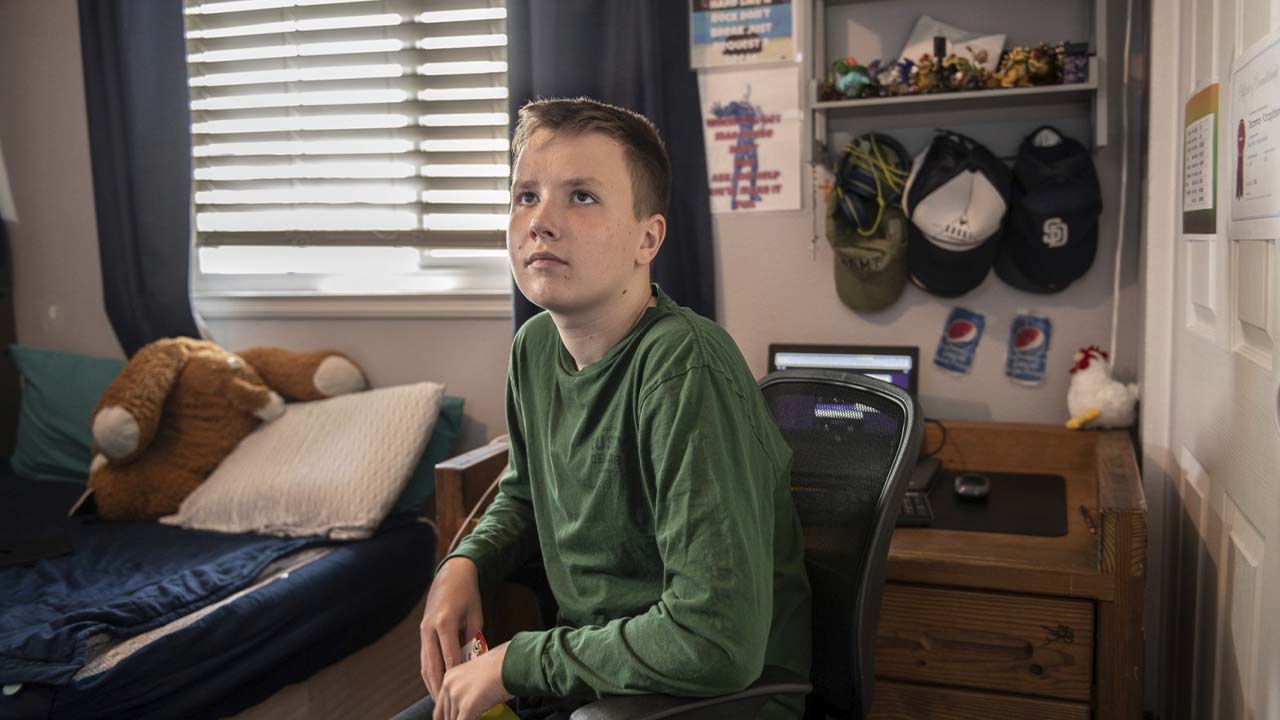 Jack Fitzgibbons watches a video related to his schoolwork in Monrovia, on Sept. 15, 2021. “There is no way to go back with 37 kids in a classroom,” Julie Fitzgibbons, the mother of triplets, said. “With masks and not being able to communicate very well, and autism, there is just no way we can go back like normal.” (CalMatters/Pablo Unzueta)

Fitzgibbons is currently going through her family’s insurance to pay for private instructors and therapists while her triplets wait for the district to finalize their agreement for special education services.

In response to questions from CalMatters, state Assemblymembers Kevin McCarty and Phil Ting issued a joint statement that said special education services can be delivered through independent study.

“However, the student’s (Individualized Education Program) is required to be updated first, to make sure the student is not receiving a lower standard of services,” they said. “There may be a determination in the IEP that the student cannot be served in independent study and get their needs met, and that would be a group discussion.”

They added that new state guidance to be released as early as this week “will dispel many of the myths that are causing confusion about independent study for families, including the rights of special education students to independent study.”

“The legislators put us between a rock and a hard place,” said Patty Metheny, an administrator who oversees special education in multiple school districts in San Bernardino County. “Because those are the only two options, the consequences are great.”

According to the federal Individuals with Disabilities Education Act, public schools must offer all students a free appropriate public education by providing any services required to accommodate a disability.

But as the name suggests, independent study requires a degree of independence, and some students aren’t able to work on their own. As a result, certain students with disabilities who aren’t ready to return to campuses might not be receiving a free appropriate public education in independent study.

“It’s very difficult to address all of the goals and needs students have through independent study,” said Amanda Brooke, a deputy superintendent at the Imperial County Office of Education. “We’ve even seen general education students fall behind.”

“There are some inequities here. Parents are allowed to choose between in-person and online. However, those two options don’t translate to students who have disabilities.”

On the other hand, individualized education plans for students with disabilities contain much more detail. The plans often state the number of hours of specialized instruction or therapy that a student must receive each week.

At the Imperial County Office of Education, special education teacher Jazmin Carrillo said her students are getting between two and three hours of real-time instruction daily. But even then, she struggles to help them make progress in both their learning and their behaviors.

“I typically am there to help regulate their behaviors. I need to be there in person to show them,” Carrillo said. “Sometimes they just turn their cameras off and that cuts me off from them.”

Nakano said her children are meeting with their teachers for about 30 minutes every day through Zoom.

“It’s a brief check-in,” she said. “It’s not exactly instruction.”

“We want to make sure we get them up to speed so they don’t have to repeat a grade,” she said. “For our family, we think about it every day.”

Joe Hong is the K-12 education reporter for CalMatters. His stories use data to highlight inequities in California’s public schools. Before joining CalMatters in June 2021, he was the education reporter at KPBS, the public media station in San Diego. Previously, he covered the schools in the Coachella Valley for The Desert Sun, a daily newspaper in Palm Springs. He has a bachelor’s degree in comparative literature from the University of California, Irvine and a master’s degree from Columbia Journalism School.