A Turlock man is among four members of the “Grizzly Scouts” extreme-right militia group who pleaded guilty to conspiring to destroy records related to the murder of a federal security officer in Oakland last year.

Jessie Alexander Rush, 29, of Turlock, admitted to being the group’s “commanding officer” in a plea agreement, the Department of Justice said in a news release Monday.

Published reports citing court filings say that the 25-member group trained near Rush’s home in Turlock, created “Quick Reaction Force,” and made plans to send a member to scout a protest in Sacramento.

Rush, Robert Jesus Blancas, 33, a Bay Area transient; Simon Sage Ybarra, 23, of Los Gatos; and Kenny Matthew Miksch, 21, of San Lorenzo, were indicted on March 23 for their scheme to obstruct justice by destroying records material to the murder and shooting investigation.

The case stems from an FBI investigation into the violent George Floyd protests outside the federal building in Oakland that left one federal security officer dead and another wounded on May 29, 2020. Dave Patrick Underwood, 53, of Pinole, was the officer killed.

Steven Carrillo, the alleged gunman in the drive-by shooting, faces charges of murder and attempted murder in that case. Robert Alvin Justus, Jr., who is the alleged driver of the vehicle, faces aiding and abetting charges.

Carrillo, an Air Force staff sergeant is also accused of the June 6, 2020, killing of Santa Cruz Sheriff Sgt. Damon Gutzwiller, 38, in an ambush in the community of Ben Lomond.

Carrillo has pleaded not guilty to both killings. According to court documents, he was a Grizzly Scouts member.

Rush previously served in the U.S. military, making him the second known member of the militia, along with Carrillo, with military experience, the Associated Press reported in June. 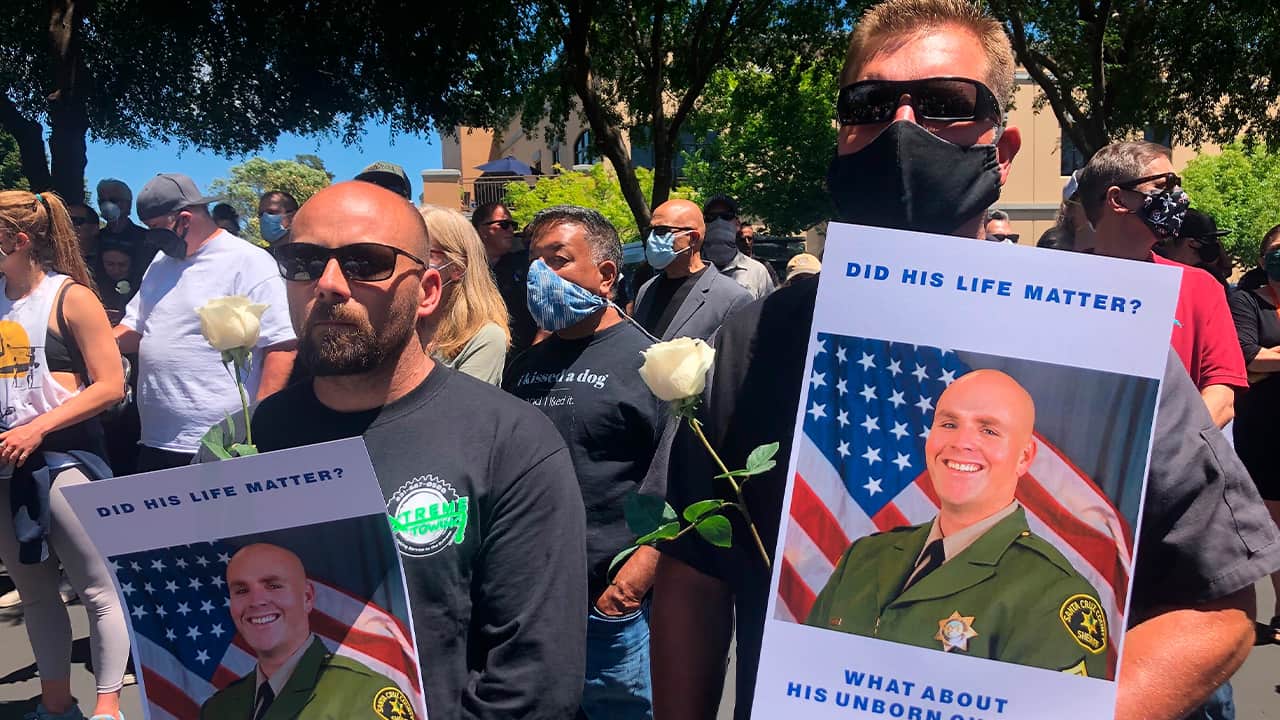 Hundreds of people, many in blue and green law enforcement uniforms, gathered at a college football field in the small town of Aptos for a public memorial for Sgt. Damon Gutzwiller of the Santa Cruz County Sheriff’s Department on June 16, 2020. (AP File)

According to each of their plea agreements, Rush, Blancas, Ybarra, and Miksch admitted that in April 2020 they joined an armed anti-government militia group named the “1st Detachment, 1st California Grizzly Scouts” They connected earlier via a Facebook group created in connection to the “boogaloo” movement.

Federal prosecutors said that “boogaloo” is a term used by some militia extremists to reference a purportedly impending civil war or uprising against the government. The “boogaloo” movement is not a cohesive group but rather a loose concept used as a rallying point for some extremists, prosecutors said.

The men acknowledged in their plea agreements that they engaged in June 2020 discussions with other Grizzly Scouts about “boog” (boogaloo), waging war against the government, and tactics for killing law enforcement personnel, including police officers, prosecutors said.

In addition, prosecutors said, Rush, Blancas, Ybarra, and Miksch each acknowledged that they learned a Grizzly Scouts member was allegedly involved in Underwood’s killing and the wounding of the other officer.

The four subsequently destroyed records of their electronic communications with Carrillo involving the murders of Underwood and Gutzwiller, according to a Santa Cruz Sentinel story citing filings by federal prosecutors.

Blancas also pleaded guilty to enticing a minor to engage in the production of child pornography. He faces 10 years to life in prison on that charge.

The cases are being prosecuted by Eric Cheng and Frank Riebli from the Special Prosecutions Section of the U.S. Attorney’s Office for the Northern District of California, with assistance from the National Security Division’s Counterterrorism Section.