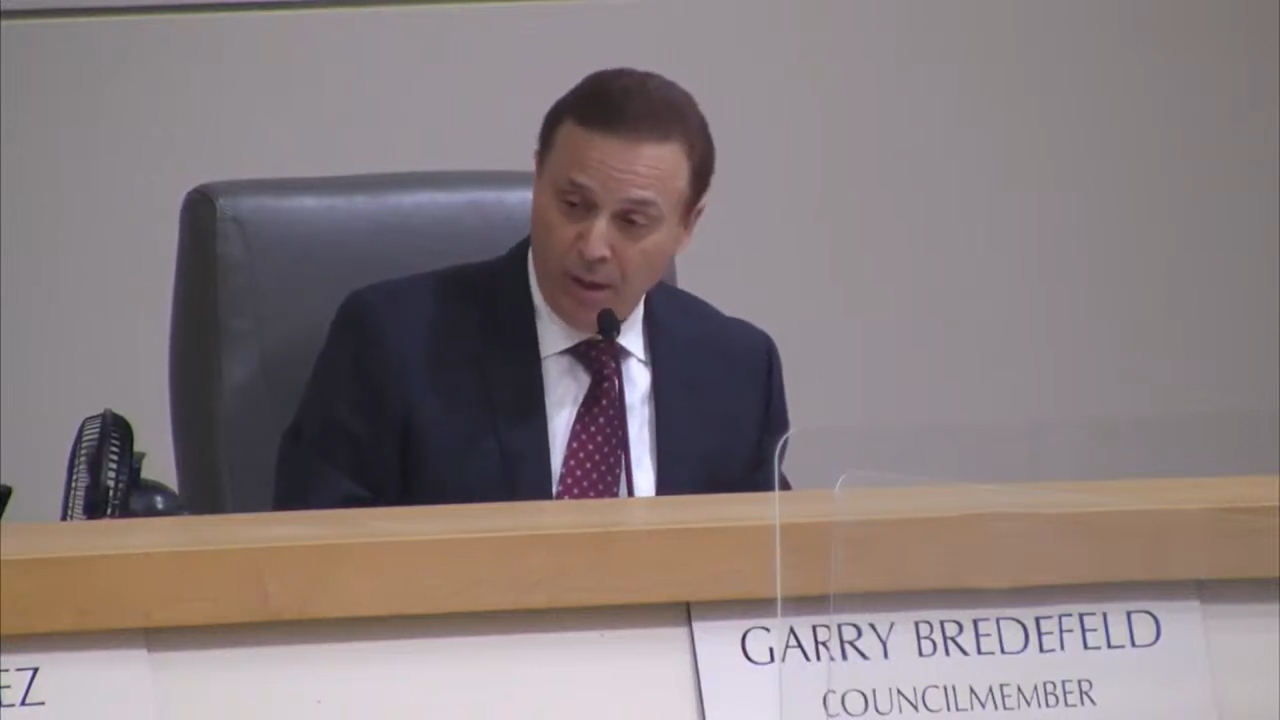 Fresno City Councilmember Garry Bredefeld responds to charges from four of his colleagues on Thursday. (Screen Capture)
Share with friends

Daniel Gai, an aide to Councilmember Garry Bredefeld, pleaded no contest last week to five counts of domestic violence. Two other counts are pending in court based on a 2019 arrest. Gai, who worked for Bredefeld since 2017, resigned his position last week.

Councilmember Esmeralda Soria, during a reports and comments portion of the meeting, talked about October as Domestic Violence Awareness month.

Soria accused Bredefeld of being an “aggressive bully.” She also called him a hypocrite for claiming to be tough on crime, but not punishing Gai.

“Stench” is a term that Bredefeld has used to allege corruption at City Hall.

Three other councilmembers directed criticism toward the northeast Fresno representative during their comments, prompting Bredefeld to call them a “Gang of Four” and repudiate their statements as “lies and mistruths.”

Councilmember Miguel Arias criticized policy positions Bredefeld has taken, including an accusation of self-dealing by attempting to eliminate the rental inspection program. Arias also accused Bredefeld of orchestrating violence against him.

Councilmember Tyler Maxwell called Bredefeld a hypocrite for opposing the Advance Peace program to reduce gang and gun violence — while retaining a staff member with a criminal arrest record.

City Council President Luis Chavez chastised his colleagues, saying that a council meeting was not the venue to air their grievances.

“Maybe a press conference would be more appropriate,” Chavez said.

Mayor Jerry Dyer added comments later in the discussion, saying his administration has no direct control over the hiring and firing of city council staffers. He recommended that such control should be under the control of the city manager. Asked how he would handle the situation, he said in his time as police chief, he would place employees under criminal investigation on administrative leave.

Bredefeld defended Gai, saying he had the right to his day in court and faced the consequences of his actions. He then turned it around on his colleagues.

“But I do believe when someone is charged with a crime — and perhaps some of the people up here may ultimately get charged with a crime — I would assume that they want due process. I assume that they would want presumption of innocence. But when the judicial process was completed, there needs to be accountability, and there was in this case. But accountability is not what the Gang of Four are interested in today,” Bredefeld said as reported by the San Joaquin Valley Sun.

Bredefeld continued to call Soria, Arias, Maxwell and Esparza “corrupt” and “sleazy,” particularly for their handling of the business of developer Terance Frazier and Club One Casino owner Kyle Kirkland.

Fraizer, who is Soria’ fiancé, operates the Granite Park sports facilities under a contract with the city. The city council was set to vote to settle a lawsuit Frazier filed regarding a 2018 city audit. The vote was delayed after Fresno County District Attorney Lisa Smittcamp sent the council a letter notifying them of an investigation of violation of the city’s open meeting laws.

Bredefeld also chastised the “gang,” particularly Maxwell, for placing conditions on Kirkland to move his casino from downtown to the Granite Park site.

Soria, in a rebuttal, was offended by the term “gang.”