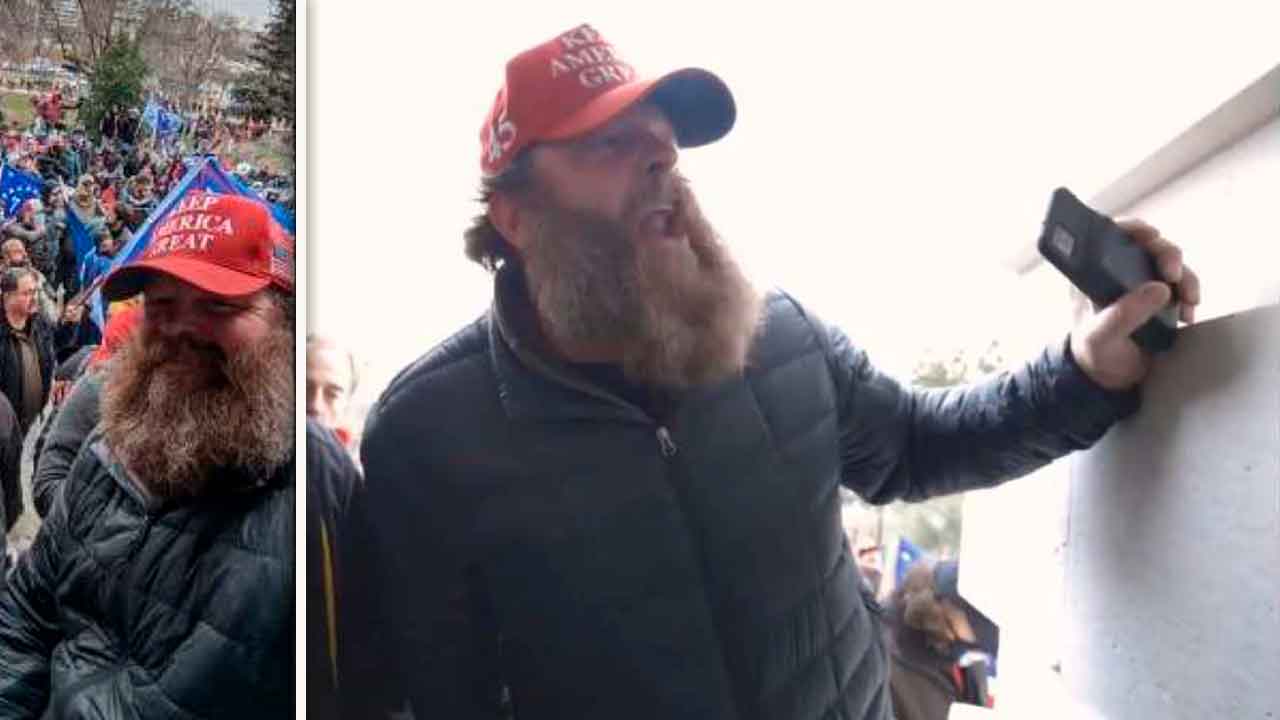 Benjamin Martin, the Central Valley man arrested Thursday by federal authorities for his alleged participation in the Jan. 6 U.S. Capitol riot, denied the six charges against him during a short court hearing on Friday. A judge ordered that he remain in custody in the Fresno County Jail until a follow up hearing on Wednesday.

The approximately 15-minute hearing was held at the federal courthouse in downtown Fresno.

Martin’s attorney, Roger Nuttall, asked for his release because of pending real estate closings Martin — a real estate agent — is involved with.

The request did not move U.S. Magistrate Erica Grosjean, who noted Martin’s 2019 domestic battery conviction, as well as an active criminal protective order and restraining orders against him.

Martin, who had worked in his family’s real estate business, is known for protesting mask-wearing at local businesses, as well as multiple run-ins with Fresno City Councilmember Miguel Arias.

US Attorney Joe Barton noted that Martin’s current residence was illegally pulling power “off the grid” and he would unlikely be allowed to return to it. Authorities list Martin’s home in Madera, although GV Wire has reported him living in Clovis in the past.

The case will eventually be transferred to a Washington, DC federal court.

“We don’t believe Mr. Martin did anything wrong, criminally or civilly,” Nuttall told GV Wire after the hearing. He plans to argue a First Amendment defense.

The 13-page charging document says federal authorities became aware of Martin on Jan. 7 from a “tipster” who used to be a high-school acquaintance. The tipster saw a clip of Martin apparently entering the Capitol in a local news clip.

Federal agents searched for Martin online on Jan. 11 and found GV Wire’s story about his involvement in a Jan. 8 story.

Initially, Martin told GV Wire he attended the Jan. 6 President Donald Trump rally and was later an unwitting participant in entering the Capitol.

“There were people trying to break into the building and I was trying to calm everyone down and to get it to be a little bit peaceful and say, ‘Hey, guys, you know, we can be here and we don’t need to act out,’ ” Martin said in January. “There were some inciters who were throwing like — Trumpers don’t throw rocks at buildings. Trumpers don’t try to break windows or break doors.”

Martin claims he was trying to de-escalate the situation and only entered the Capitol when pushed in. He said he later walked out to avoid being pepper-sprayed.

The charging document had a different narrative.

FBI agents from Sacramento interviewed Martin on Jan. 15. He told them a similar story as he told GV Wire.

“Martin said he was attempting to calm everyone down. Martin said he felt it was foolish for him to think he could resist so many people pushing him forward and decided to leave that location and watched the ‘protest’ continue from the Capitol grounds,” the charging document said.

The investigation showed that Martin communicated with a person only identified as “R.T.” who was “known to the FBI to have advocated for violence in the lead-up to January 6.”

More video allegedly shot after the first Martin breach showed him again in the Capitol doorway. He is hit in the head with a chair from behind, but was seemingly undeterred. Law enforcement eventually sprayed a chemical irritant into the crowd.

Martin has had a series of heated run-ins, whether protesting mask mandates at local businesses or confronting elected leaders over their positions.

There are at least two documented incidents of Martin verbally confronting Fresno Councilman Miguel Arias — once at Arias’ home and another time when the two coincidentally were in the same Paso Robles restaurant.

The federal government charged Martin with:

This story has been updated to include reporting about Martin’s court hearing on Friday.

Fresno Is Not Alone in Fighting Back on Amazon Locker Locations