Was Biden Handcuffed by Trump's Taliban Deal in Doha? 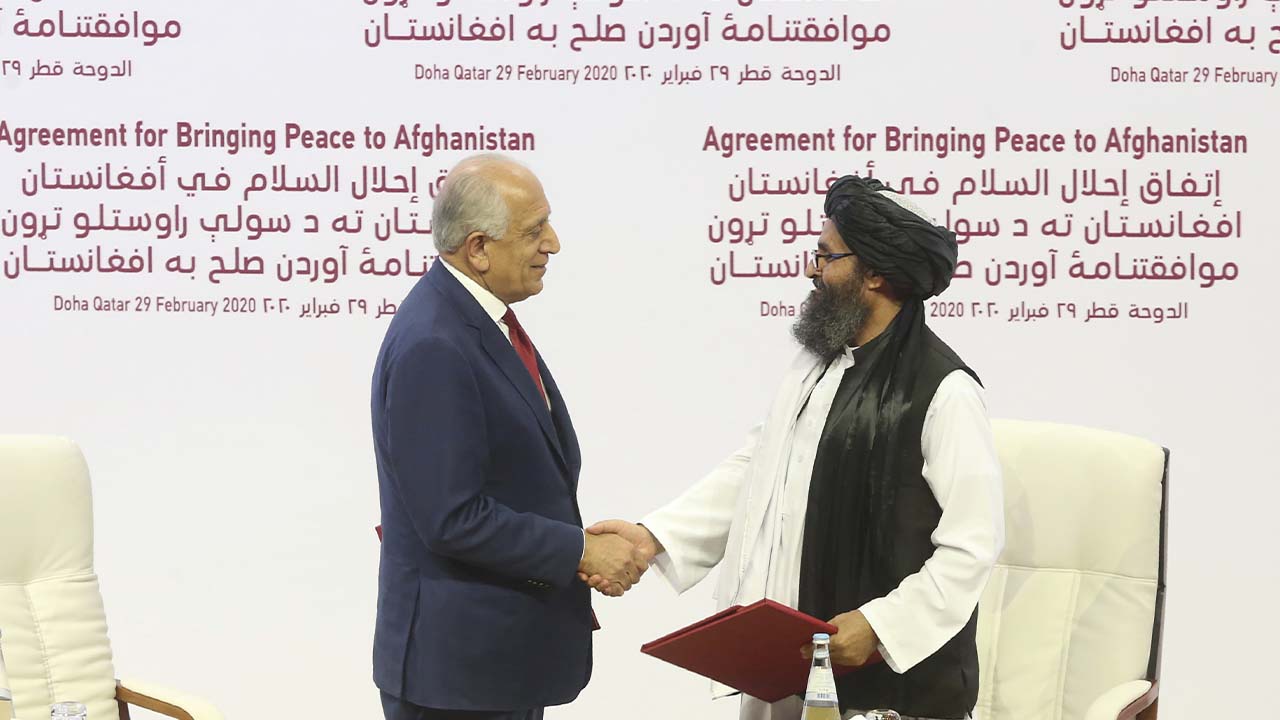 WASHINGTON — As President Donald Trump’s administration signed a peace deal with the Taliban in February 2020, he optimistically proclaimed that “we think we’ll be successful in the end.” His secretary of state, Mike Pompeo, asserted that the administration was “seizing the best opportunity for peace in a generation.”

Eighteen months later, President Joe Biden is pointing to the agreement signed in Doha, Qatar, as he tries to deflect blame for the Taliban overrunning Afghanistan in a blitz. He says it bound him to withdraw U.S. troops, setting the stage for the chaos engulfing the country.

But Biden can go only so far in claiming the agreement boxed him in. It had an escape clause: The U.S. could have withdrawn from the accord if Afghan peace talks failed. They did, but Biden chose to stay in it, although he delayed the complete pullout from May to September.

Chris Miller, acting defense secretary in the final months of the Trump administration, chafed at the idea that Biden was handcuffed by the agreement.

“If he thought the deal was bad, he could have renegotiated. He had plenty of opportunity to do that if he so desired,” Miller, a top Pentagon counterterrorism official at the time the Doha deal was signed, said in an interview.

Biden Says His Hands Were Tied Because of Trump’s Deal

Renegotiating, though, would have been difficult. Biden would have had little leverage. He, like Trump, wanted U.S. troops out of Afghanistan. Pulling out of the agreement might have forced him to send thousands more back in.

He made that point Monday, saying in a televised address from the White House that he would not commit to sending more American troops to fight for Afghanistan’s future while also harkening back to the Trump deal to suggest that the withdrawal path was predetermined by his predecessor.

“The choice I had to make, as your president, was either to follow through on that agreement or be prepared to go back to fighting the Taliban in the middle of the spring fighting season,” Biden said.

The Taliban takeover, far swifter than officials from either administration had envisioned, has prompted questions from even some Trump-era officials about whether the terms and conditions of the deal — and the decisions that followed after — did enough to protect Afghanistan once the U.S. military pulled out.

Doha Agreement Was Heavily Weighted in Favor of Taliban

The historic deal was always high-wire diplomacy, requiring a degree of trust in the Taliban as a potential peace partner and inked despite skepticism from war-weary Afghans who feared losing authority in any power-sharing agreement.

“The Doha agreement was a very weak agreement, and the U.S. should have gained more concessions from the Taliban,” said Lisa Curtis, an Afghanistan expert who served during the Trump administration as the National Security Council’s senior director for South and Central Asia.

She called it “wishful thinking” to believe that the Taliban might be interested in lasting peace. The resulting agreement, she said, was heavily weighted toward the Taliban, contributed to undermining Afghan President Ashraf Ghani — he fled the country Sunday and is now in the United Arab Emirates — and facilitated the release of 5,000 Taliban prisoners without a commensurate concession from the Taliban.

“They wanted U.S. forces out, and they wanted to take over the country militarily, and they believed that they could do that,” Curtis said of the Taliban. “That was just crystal clear.”

The agreement called for the U.S. to bring down its forces to 8,600 from 13,000 over the following three to four months, with the remaining U.S. forces withdrawing in 14 months, or by May 1.

‘No Good Time to Leave Afghanistan’

Biden, in an ABC interview that aired Thursday, said he was confronted with that deadline soon after taking office: “Do I say we’re staying? And do you think we would not have to put a hell of a lot more troops?” Even without Trump’s deal, Biden said he “would’ve tried to figure out how to withdraw those troops” and that “there is no good time to leave Afghanistan.”

The agreement stipulated commitments the Taliban were expected to make to prevent terrorism, including obligations to renounce al-Qaida and prevent that group or others from using Afghan soil to plot attacks on the U.S. or its allies. Though the agreement bound the Taliban to halt attacks on U.S. and coalition forces, it did not explicitly require them to expel al-Qaida or to stop attacks on the Afghan military.

The agreement provided significant legitimacy to the Taliban, whose leaders met with Pompeo, the first secretary of state to have such interactions. There were also discussions of them coming to the U.S. to meet with Trump.

U.S. officials made clear at the time that the agreement was conditions-based and the failure of intra-Afghan peace talks to reach a negotiated settlement would have nullified the requirement to withdraw.

One day before the Doha deal, a top aide to chief U.S. negotiator Zalmay Khalilzad said the agreement was not irreversible, and “there is no obligation for the United States to withdraw troops if the Afghan parties are unable to reach agreement or if the Taliban show bad faith” during negotiations.

Those negotiations were intended to begin within a month of the deal being signed but were delayed amid disputes between the Taliban and the Afghan government over prisoner releases. Amid fits and starts, the negotiations had not produced any outcome by the time Biden announced his withdrawal decision in April. Nor have they done so since.

Miller said it was the “right approach” and necessary to force Ghani into negotiations. He said the Doha deal was always supposed to be “phase one” of the process, with the next part being the U.S. using its leverage to have Ghani negotiate on a power-sharing deal with the Taliban.

“Obviously, he was not jazzed by that, but he was going to do it — or he was going to be removed,” Miller said. “We were going to put some serious pressure on him to make him cut a deal with the Taliban.”

Afghans Plead for Faster US Evacuation From Taliban Rule

Police Probing Report of Explosive in Truck Near Capitol