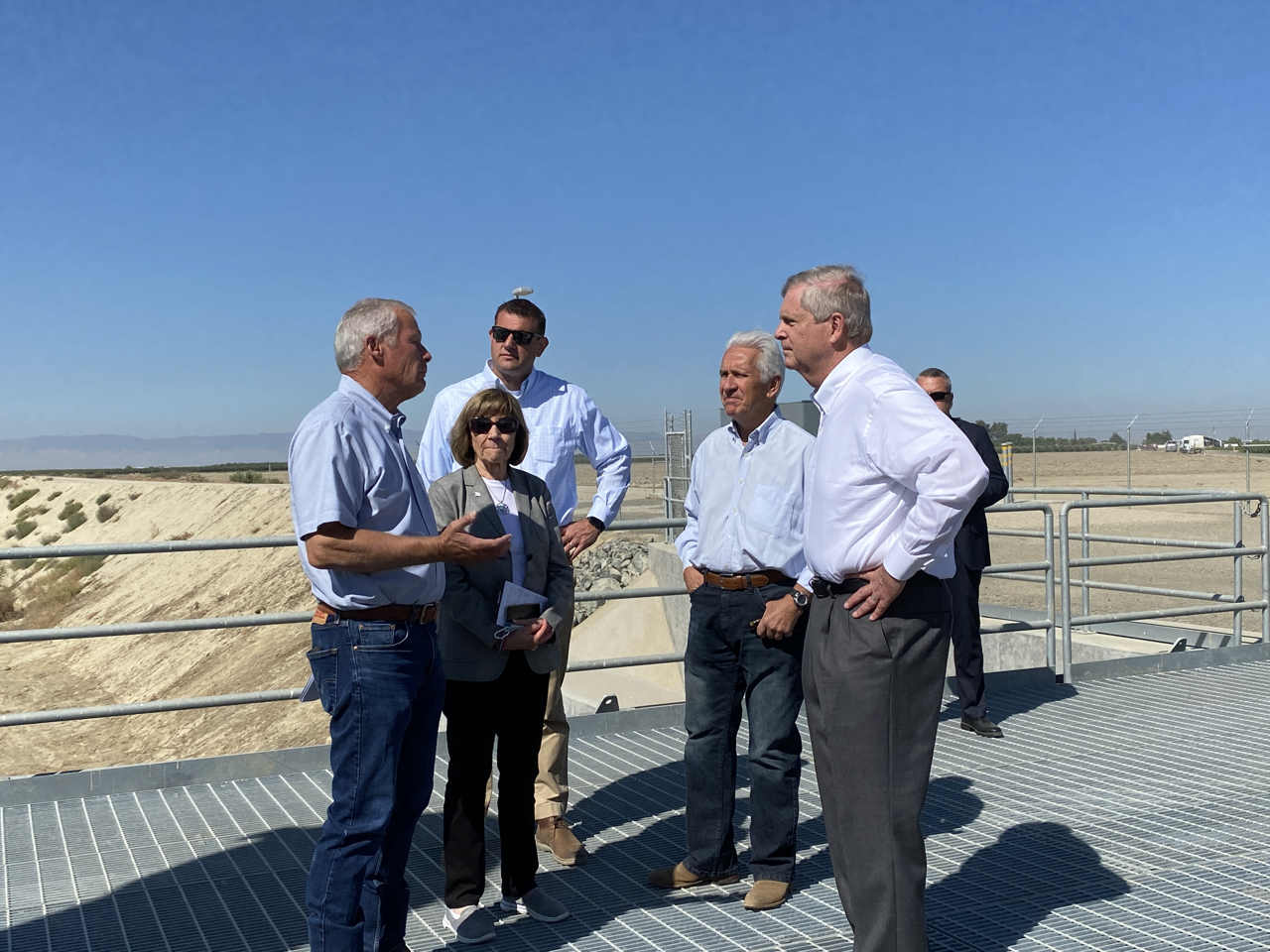 Water was the top issue, but not the only one, discussed as U.S. Secretary of Agriculture Tom Vilsack visited the Central Valley on Thursday.

Vilsack spent his morning at the TerraNova Ranch in the Fresno County town of Helm near Five Points. He was joined by Secretary of the Department of Food and Agriculture Karen Ross along with Rep. Jim Costa, D-Fresno and Rep. David Valadao, R-Hanford.

“It’s fairly clear that when you have rising temperatures, you’ve got early snowmelt, you’ve got low rainfall and you’ve got wildfires. It is a toxic mix for California agriculture and for that matter, for all of American agriculture because of the role that California plays,” Vilsack said.

He touted various federal programs including the Interagency Drought Relief Working Group, which will provide $25 million to drought-stricken California and Oregon. 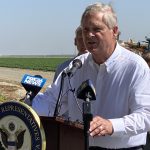 “It is a toxic mix for California agriculture.” — U.S. Secretary of Agriculture Tom Vilsack

Vilsack didn’t have a specific reaction, but said the federal government is there to help.

“I’m not well versed in all of the state policies and decision making, but I would just simply say it underscores the need for the Department of Agriculture to figure out ways in which it can provide help and assistance to farmers who may find their inability to have the production levels that they’ve had in the past,” Vilsack said.

One program is providing disaster insurance. Vilsack hopes the 2023 farm bill will make it easier to apply a long-term drought situation.

“What you have here in California is a long standing some would call a mega drought, one that’s lasted two years as opposed to months. And our programs need to be designed for addressing that type of disaster rather than trying to cobble things together, which is what we’re doing today,” Vilsack said.

Vilsack said the climate has changed, creating the need for mitigation strategies.

Ross, California’s ag secretary and one-time chief of staff for Vilsack at the USDA, supported the water board decision.

“What the state board did was absolutely necessary for us to prevent salinity intrusion in the Delta, which would ruin water for drinking, for ag, for species. And what they did is we have to be thinking about next year in case we have another year like this. We are managing on the edge,” Ross said.

Vilsack met with about 30 farmers at TerraNova Ranch in the morning. Other issues discussed included labor, security and trade with international markets.

“We’re truly struggling,” Valadao said about water. “And to be able to bring some attention to this is obviously important. But we’re struggling on a lot of different fronts.”

“Food is a national security issue,” Costa said. “I hope that more Americans are beginning to realize how critical our food supply chain is. It’s all been said. But the fact of the matter is that for agriculture, we’re concerned about all the issues. But key here in our Valley is water, water and water.”

TerraNova Ranch owner Don Cameron said he draws his water from well pumping. He grows 25 crops, with tomatoes being the main crop. He’s said he’s been recharging his water for 30 years, long before the State Groundwater Management Act was passed.

Cameron appreciated the visit by Vilsack, Ross and the congressmen.

“I think it was very appropriate that they came here, especially with all the water issues that we’re having here in California right now with the drought,” Cameron said. 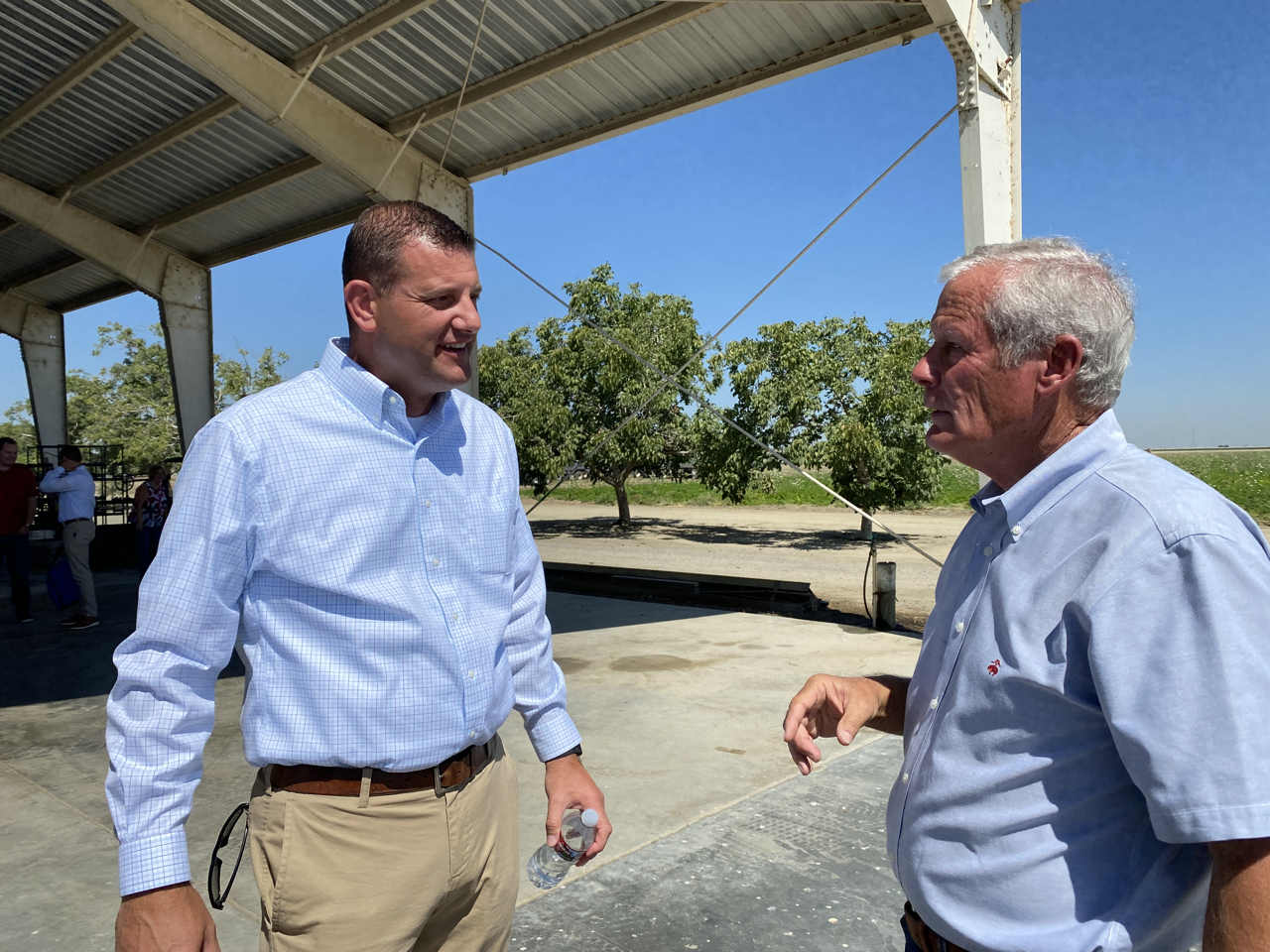 This was Vilsack’s first Central Valley meeting during the Biden administration. Vilsack visited the area several times during his first stint as agriculture secretary during the Obama administration from 2009-2017.

Vilsack also had a meeting with UFW representatives in Fresno later in the day. He praised farm workers for the hard work they do.

“You want to talk about family values? You want to talk about about what’s important in life? These folks are living it. They’re working hard jobs, difficult jobs, jobs that a lot of us won’t work to be able to support their family. And all they’re asking for, all they’re asking for is legitimacy and an opportunity to visit their family and shame on us if we can’t figure out how to do that,” Vilsack said.

No Charges for Central Unified Schools Chief. Here’s His Reaction.