Community Colleges Offer Cash, Textbooks to Students Who Get Vaccinated 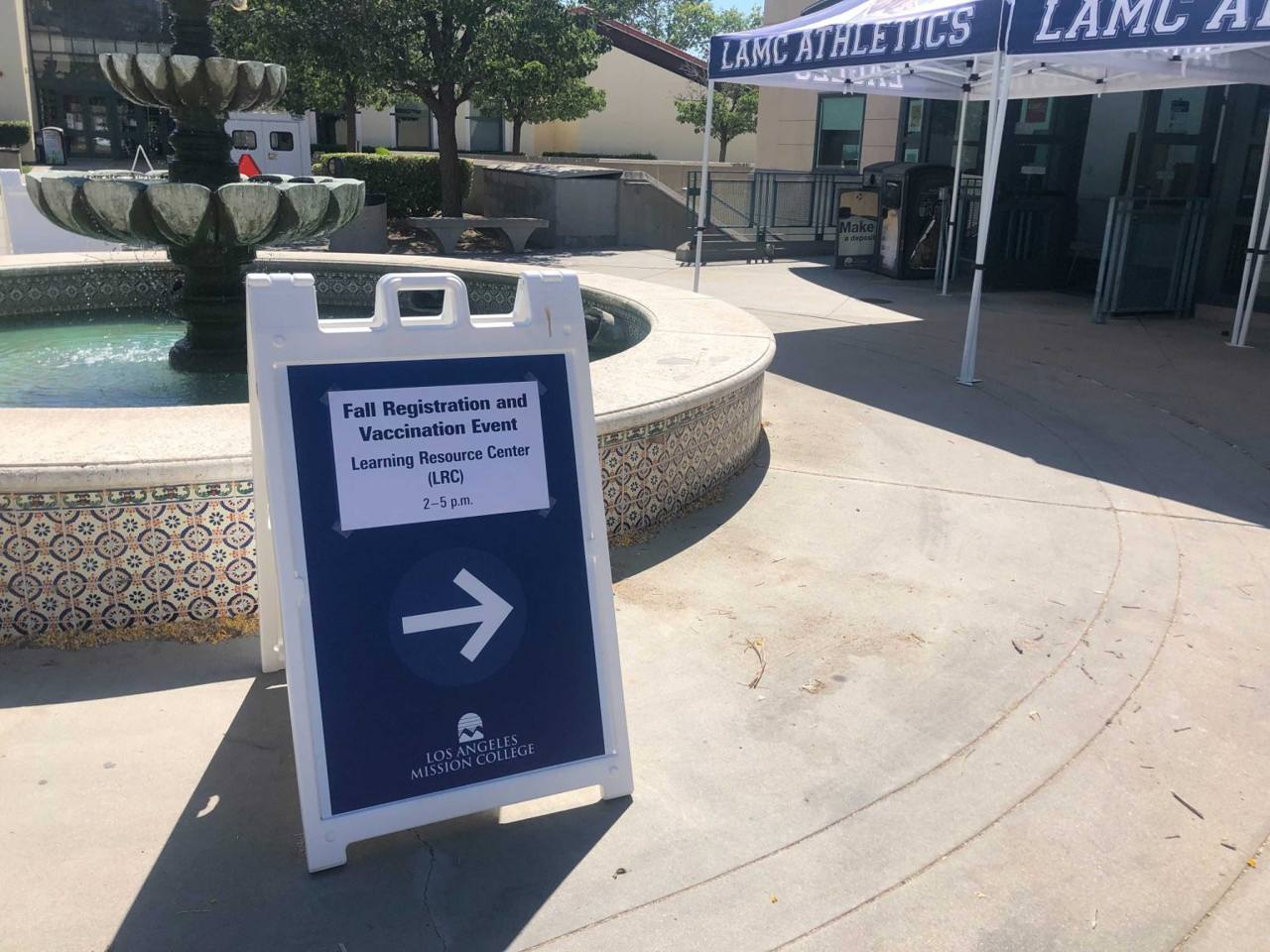 Los Angeles Mission College offered cash incentives for students who agreed to be vaccinated on July 21, 2021. (Photo by Matthew Reagan)
Share with friends

Jaime Barrientos, a psychology student at Los Angeles Mission College, was searching for information on fall classes a couple weeks ago when he noticed that coronavirus vaccines were being offered during on-campus registration. He messaged a friend who was also unvaccinated and hadn’t planned on getting the shot, and the two of them spent the afternoon in the school’s library filling out paperwork for their first dose of the Pfizer regimen.

What got Barrientos and his skeptical friend out of the house to get vaccinated?

“The money,” the duo said in unison.

In an effort to increase vaccination among its 250,000 students, the Los Angeles Community College District offered $75 to each student who got vaccinated at two campus events — one July 21 at LA Mission and another at Los Angeles Valley College on July 31. Students who brought along a friend or family member could earn $150.

While the University of California and California State University have both mandated vaccination for students, faculty and staff who spend time on campus, most of California’s 73 community college districts are choosing instead to encourage or incentivize vaccination. Some are offering money, textbooks or other inducements to get students to sign up.

The California Community Colleges Chancellor’s Office released an advisory strongly urging all community college districts to adopt vaccination mandates, citing the surge in COVID-19 cases fueled by the Delta variant. But system officials say they lack the legal authority to require vaccinations for students and staff across the state.

Some have added other safety measures. For example, at the San Diego Community College District, where 25% of classes are in person, students must wear a mask while on campus, regardless of vaccination status.

The vaccine requirements have been contentious. San Joaquin Delta College in Stockton considered a return to campus plan that required vaccination, but trustees voted against the mandate in a July 6 board meeting after community members voiced concern about the safety of the vaccine and a timeline requiring that students be vaccinated by Aug. 13. Instead, the college is telling students to mask up and social distance, and offering free textbooks to those who are vaccinated.

Most of the state’s 116 community colleges will offer some combination of in-person and online classes this fall, with the balance varying by district.

Show Me the Money

At Los Angeles Mission College registration, the cash rewards for vaccination seemed to be having some impact. About three-quarters of people who received vaccines asked specifically about their incentives, said Dana Walker, a nurse administering the shots. With an hour left in the event, about 35 people had been vaccinated, she said.

In addition to the $75, students vaccinated at the event received a free pass to Six Flags Magic Mountain provided by a grant from Kaiser Permanente.

More vaccination clinics will be offered during registration fairs at the Los Angeles Community College District’s other campuses Aug. 7, said district spokesperson William Boyer. But the district, the state’s largest, is not requiring vaccination for students, faculty and staff. Instead, they’ll be required to wear masks while on campus — about half of fall classes will be held in person — and watch a training video on COVID safety protocols.

That’s because the vaccine has yet to be approved by the U.S. Food and Drug Use Administration for non-emergency use, Boyer said.

“The best legal advice we had was that you cannot mandate a vaccine that has only been approved under emergency use conditions,” he said. “There has been no FDA approval for these vaccines to be used in regular life.”

But LACCD’s understanding of the law is different from that of the UC and CSU systems, which are both mandating vaccination for students before full FDA approval, after first saying that they would wait for it.

California State University announced its decision last week after over 1,000 professors signed an open letter to the Chancellor’s office calling for the vaccine requirement.

“With over 480,000 students, it makes sense to implement a vaccine mandate because we have an enormous impact, not only within our own campus borders but also within the communities in which we’re located,” said Blain Roberts, a history professor at Fresno State and one of the faculty members who wrote the open letter.

The move came as the Delta variant fuels a rise in coronavirus cases nationwide. The U.S. Centers for Disease Control on Tuesday said everyone, regardless of vaccination status, should mask in public indoor spaces in areas where transmission rates are high.

There is no legal precedent for requiring vaccines approved under emergency use, which may be why some colleges are reluctant to announce mandates now, said Dorit Reiss, a professor at UC Hastings College of the Law.

In June, a federal judge threw out a lawsuit against Houston Methodist Hospital after finding that an employee vaccine mandate did not break any U.S. law. The Texas case offers the closest test of requiring a vaccine approved under emergency use to date, Reiss said.

The Student Senate for California Community Colleges hasn’t taken a position on a vaccine requirement, but president Gerardo Chavez said student opinion on the issue was mixed.

“There are certain student populations who are eager to attend in-person courses because of their mental health and just overall experience with student life, and there’s also hesitancy from students returning back to campus, especially with the increase of infection,” he said.

Emma Hall and Matthew Reagan are interns with the CalMatters College Journalism Network, a collaboration between CalMatters and student journalists from across California. This story and other higher education coverage are supported by the College Futures Foundation.

Related Topics:California Community Collegesvaccine
Up Next