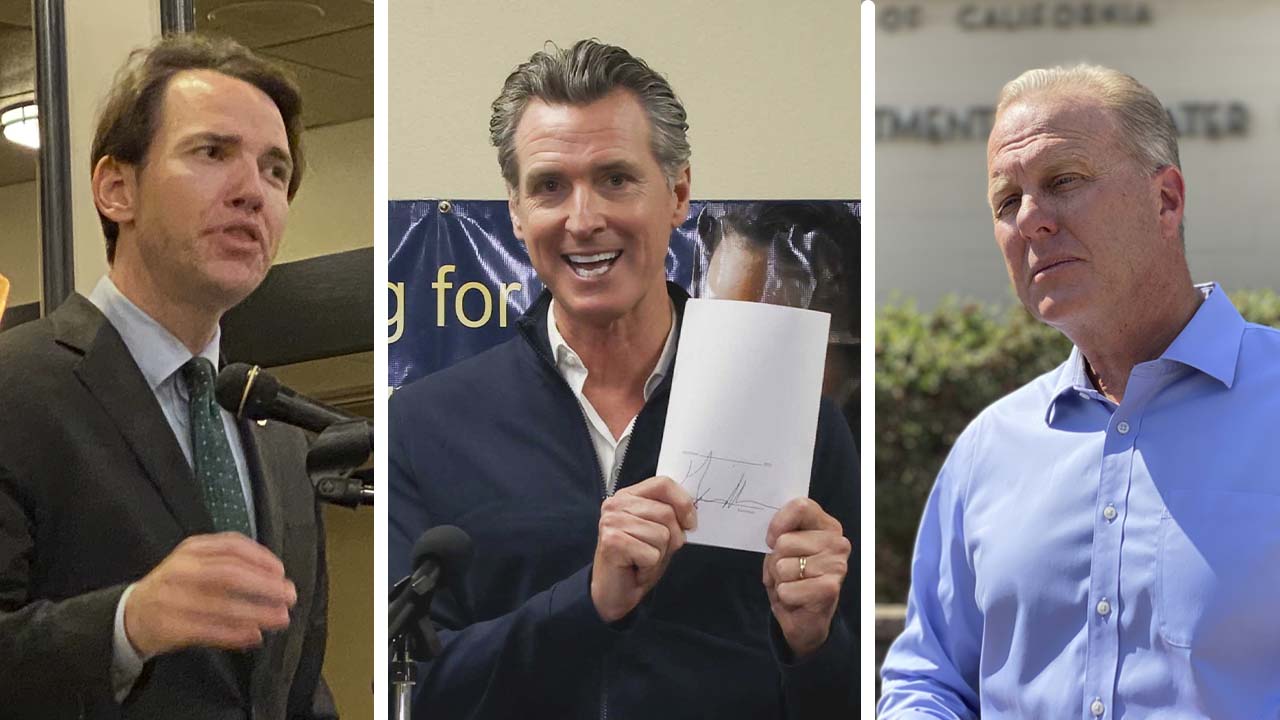 (L to R) Kevin Kiley, Gavin Newsom and Kevin Faulconer all visited Fresno within 24 hours of each other. (GV Wire Composite/Justine Cha)
Share with friends

Within a 24 hour period, two prominent recall candidates and the man subject to the recall election visited Fresno.

Faulconer laid out his water policy in front of the state Department of Water Resources office in central Fresno, accompanied by Fresno County Supervisor Buddy Mendes.

“This governor has failed our agriculture community by not providing the water resources that our farmers need,” Faulconer said.

“As long as dictionaries are printed, the first entry under hypocrisy is ‘French Laundry,” Kiley said, referring to Newsom’s ill-fated dinner at a fancy Napa County restaurant that energized the recall movement.

Two recent polls indicate the recall election is much tighter than it once was. An Inside California Politics/Emerson College poll found 48% support for Newsom with 43% of respondents favoring his recall. A Berkeley/IGS poll showed just a 50% to 47% split in Newsom’s favor.

The recall election is Sept. 14, with ballots going out in mid-August.

In his first public campaign stop in Fresno, Faulconer outlined his plan for meeting the water needs of Valley farms.

Faulconer said he would create new water surface storage by building new reservoirs; provide funding for canal repairs; and appoint new board members of water-related state agencies who are supportive of farmers.

“What we see time and time again is another drought. But yet we haven’t had a governor that says we’re going to take the actual steps to increase our supply,” Faulconer said. “There will be a dramatic change to give us the water resources, the supply that this valley needs and our agriculture community deserves to be successful.”

Newsom’s #water policies are killing jobs in the Central Valley.

In Fresno today I made it clear: the water will flow to the Central Valley. The farms will have adequate water. People will have the jobs they need. America will have American produced food. #RecallGavinNewsom pic.twitter.com/0MIXxmtXaK

Speaking to a receptive audience, Kiley repeated the mantra “government is broken” when talking about California issues including the gas tax, school policy, affordable housing and electricity among others.

Kiley also questioned the fairness in the recall election process.

“(Democrats) have already cheated in this election,” Kiley said. He cited the use of an all mail-in ballot system and the legislature foregoing a financial audit of election costs to speed up the date.

Fresno County election officials in the past have said they plan to operate in-person voting centers in addition to processing votes by mail.

Advocating for the Recall

Both Kiley and Faulconer made similar arguments in favor of the recall in separate interviews with GV Wire.

“Gavin Newsom has abused the public trust in really unthinkable ways. This governor took the state of emergency in the COVID-19 pandemic and used it to claim extraordinary powers that then he used for personal political gain and to reward the special interests that put him in office,” Kiley said.

“This governor has failed California on so many levels, not just the up and down response to the pandemic, but the facts that our state is too expensive. Californians are leaving because they can’t afford it. Homelessness is exploding by double digits. Crime is rising. We have a governor that’s in over his head,” Faulconer said.

Faulconer cited his experience as San Diego mayor as why voters should chose him among 46 replacement candidates.

“I know how to bring people together to achieve results. That’s what’s missing in Sacramento,” Faulconer said.

Kiley said his first hand look as a state legislator gives him the edge.

Both Faulconer and Kiley said they would not mandate vaccines for state or any other employees. Newsom recently mandated that state employees either show proof of the COVID vaccination or submit to weekly tests. Los Angeles city officials have followed suit.

“I believe in personal choice on these matters, and I don’t think there’s been any evidence that even such mandates really do any good as far as public health is concerned. California has had some of the worst public health outcomes in the entire country,” Kiley said.

“I want everybody to get vaccinated. I’ve been very clear about that. But I’m a big believer in educating, not mandating,” Faulconer said.

Both say they would end the state’s emergency pandemic order.

“You have to save lives, yes. But you also have to save livelihoods. And when it came to this governor and the shutdowns that we had to endure for far too long in California, it’s been devastating to so many families and small businesses,” Faulconer said.

Kiley said it would be his first course of action.

“I would terminate the state of emergency immediately. It’s an absurdity that this is still in effect,” Kiley said.