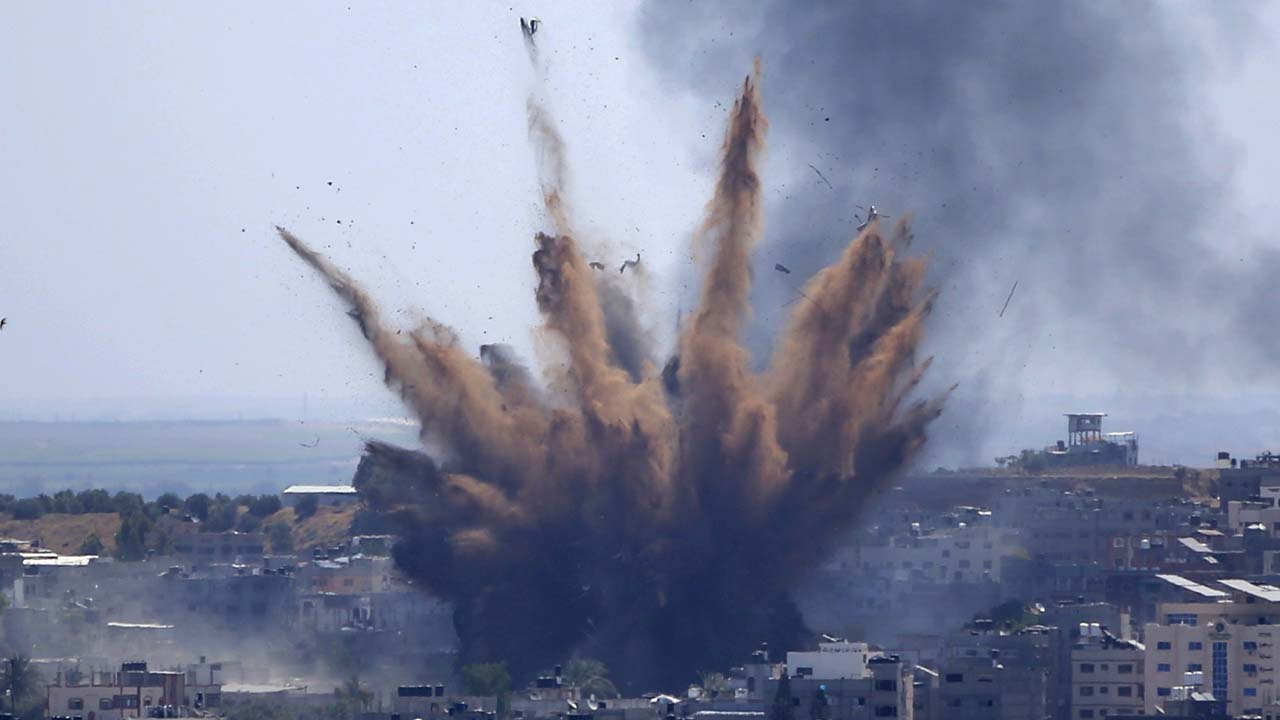 In this May 13, 2021 photo, smoke rises following Israeli airstrikes on a building in Gaza City. (AP Photo/Hatem Moussa)
Share with friends

JERUSALEM — Human Rights Watch on Tuesday accused the Israeli military of carrying out attacks that “apparently amount to war crimes” during an 11-day war in May against the Hamas militant group.

The international human rights organization issued its conclusions after investigating three Israeli airstrikes that it said killed 62 Palestinian civilians. It said “there were no evident military targets in the vicinity” of the attacks.

The report also accused Palestinian militants of apparent war crimes by launching over 4,000 unguided rockets and mortars at Israeli population centers. Such attacks, it said, violate “the prohibition against deliberate or indiscriminate attacks against civilians.”

The report, however, focused on Israeli actions during the fighting, and the group said it would issue a separate report on the actions of Hamas and other Palestinian militant groups in August.

“Israeli forces carried out attacks in Gaza in May that devastated entire families without any apparent military target nearby,” said Gerry Simpson, associate crisis and conflict director at HRW. He said Israel’s “consistent unwillingness to seriously investigate alleged war crimes,” coupled with Palestinian rocket fire at Israeli civilian areas, underscored the importance of an ongoing investigation into both sides by the International Criminal Court, or ICC.

The Israeli military has repeatedly said its attacks were aimed at military targets in Gaza. It says it takes numerous precautions to avoid harming civilians and blames Hamas for civilian casualties by launching rocket attacks and other military operations inside residential areas.

The war erupted on May 10 after Hamas fired a barrage of rockets toward Jerusalem in support of Palestinian protests against Israel’s heavy-handed policing of the Al-Aqsa Mosque compound, built on a contested site sacred to Jews and Muslims, and the threatened eviction of dozens of Palestinian families by Jewish settlers in a nearby neighborhood. During the fighting, Hamas fired over 4,000 rockets and mortars toward Israel, while Israel has said it struck over 1,000 targets it says were linked to Gaza militants.

In all, some 254 people were killed in Gaza, including at least 67 children and 39 women, according to the Gaza Health Ministry. Hamas has acknowledged the deaths of 80 militants, while Israel has claimed the number is much higher. Twelve civilians, including two children, were killed in Israel, along with one soldier.

The HRW report looked into Israeli airstrikes. The most serious, on May 16, involved a series of strikes on Al-Wahda Street, a central thoroughfare in downtown Gaza City. The airstrikes destroyed three apartment buildings and killed a total of 44 civilians, HRW said, including 18 children and 14 women. Twenty-two of the dead were members of a single family, the al-Kawlaks.

Israel has said the attacks were aimed at tunnels used by Hamas militants in the area and that the damage to the homes was unintentional.

Report Finds No Evidence Nor Effort to Evacuate Residents

In its investigation, HRW concluded that Israel had used U.S.-made GBU-31 precision-guided bombs, and that Israel had not warned any of the residents to evacuate the area ahead of time. It also found no evidence of military targets in the area.

“An attack that is not directed at a specific military objective is unlawful,” it wrote.

The investigation also looked at a May 10 explosion that killed eight people, including six children, near the northern Gaza town of Beit Hanoun. It said the two adults were civilians.

In a statement Tuesday, the Israeli military said the casualties were caused by errant rocket fire launched by militant groups, not Israeli airstrikes. It released aerial photos of what it said was the launch site, some 7.5 kilometers (4 miles) away, and the landing area.

“This incident demonstrates the blatant disregard for civilian life on the part of terror organizations in the Gaza Strip,” it said.

But based on an analysis of munition remnants and witness accounts, HRW said evidence indicated the weapon had been “a type of guided missile.”

“Human Rights Watch found no evidence of a military target at or near the site of the strike,” it said.

Israel Refused to Cooperate With Investigation

The New York-based group said that Israel refused to allow its investigators to enter Gaza. Instead, it said it relied on a field researcher based in Gaza, along with satellite images, expert reviews of photos of munitions fragments and interviews conducted by video and telephone.

The third attack HRW investigated occurred on May 15, in which an Israeli airstrike destroyed a three-story building in Gaza’s Shati refugee camp. The strike killed 10 people, including two women and eight children.

HRW investigators determined the building was hit by a U.S.-made guided missile. It said Israel has said that senior Hamas officials were hiding in the building. But the group said no evidence of a military target at or near the site and called for an investigation into whether there was a legitimate military objective and “all feasible precautions” were taken to avoid civilian casualties.

U.S. Called on to Assist in the Security of Israel

The May conflict was the fourth war between Israel and Hamas since the Islamic militant group, which opposes Israel’s existence, seized control of Gaza in 2007. Human Rights Watch, other rights groups and U.N. officials have accused both sides of committing war crimes in all of the conflicts.

Early this year, HRW accused Israel of being guilty of international crimes of apartheid and persecution because of discriminatory polices toward Palestinians, both inside Israel as well as in the occupied West Bank and Gaza Strip. Israel rejected the accusations.

In Tuesday’s report, it called on the United States to condition security assistance to Israel on it taking “concrete and verifiable actions” to comply with international human rights law and to investigate past abuses.

It also called on the ICC to include the recent Gaza war in its ongoing investigation into possible war crimes by Israel and Palestinian militant groups. Israel does not recognize the court’s jurisdiction and says it is capable of investigating any potential wrongdoing by its army and that the ICC probe is unfair and politically motivated.