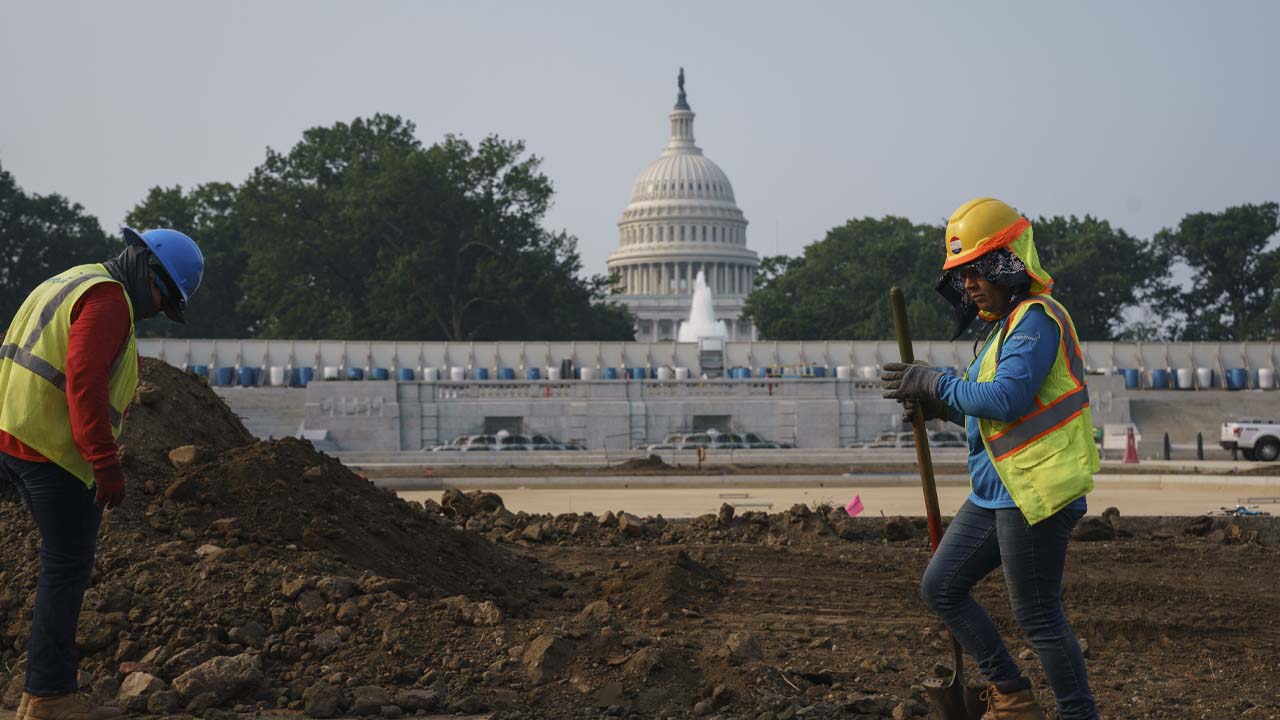 Workers repair a park near the Capitol. Senators hope the infrastructure bill will ready next week. (AP Photo/J. Scott Applewhite)
Share with friends

WASHINGTON — Senators were running into new problems Monday as they raced to seal a bipartisan infrastructure deal with pressure mounting on all sides to show progress on President Joe Biden’s top priority.

Heading into a make-or-break week, serious roadblocks remain. One dispute is over how much money should go to public transit. But spending on highways, water projects, broadband and others areas remains unresolved, too, as is whether to take unspent COVID-19 relief funds to help pay for the infrastructure.

Democrats and the White House sent a fresh “global” offer to resolve remaining issues, but it was rebuffed early Monday by Republicans as “discouraging” — a setback for a hoped-for afternoon deal.

The week ahead is crucial after more than a month-long slog of negotiations since Biden and the bipartisan group first celebrated the contours of the bipartisan agreement in June at the White House.

Senate Majority Leader Chuck Schumer, D-N.Y., has said he wants to pass the nearly $1 trillion bipartisan package as well as the blueprint for a larger $3.5 trillion budget plan before the Senate leaves for its August recess.

The White House wants a bipartisan agreement for this first phase, but as talks drag on anxious Democrats, who have slim control of the House and Senate, could leave Republicans behind and try to go it alone. If it fails, it could be wrapped into the broader package of Biden’s priorities that Democrats are hoping to pass later.

The bipartisan package includes about $600 billion in new spending on public works projects. Democrats want to see more of the money go toward boosting public transportation, which includes subways, light-rail lines and buses, in line with Biden’s original infrastructure proposal and the push to address climate change.

The Democrats and the White House had sent what they called a “global” offer to Republicans on remaining issues late Sunday, according to a Democratic aide close to the talks and granted anonymity to discuss them.

But Republicans rebuffed the ideas, according to a GOP aide also granted anonymity to discuss the private talks. The aide said the new proposal attempted to reopen issues that had already been resolved.

The Republicans believe the White House will need to show more flexibility if the talks are to be successful, the aide said.

Disagreements With Spending on Highway VS. Public Transit

The bipartisan group originally appeared to be moving toward agreement on more money for transit. But Pennsylvania Sen. Pat Toomey, the top Republican on the Senate Banking, Housing and Urban Affairs Committee, which oversees public transit, raised questions. He cited, in part, previous COVID-19 federal relief money that had already been allocated to public transit.

“Nobody’s talking about cutting transit,” Toomey said Sunday. “The question is, how many tens of billions of dollars on top of the huge increase that they have already gotten is sufficient? And that’s where there is a little disagreement.”

Typically, spending from the federal Highway Trust Fund has followed the traditional formula of 80% for highways and 20% for transit. Democratic Sens. Sherrod Brown of Ohio and Tom Carper of Delaware say they will oppose the deal if transit funding falls below that.

In the latest offer, Democrats had accepted the Republican proposal on highway spending, contingent on Republicans agreeing to the Democratic position on public transit, the Democratic aide said.

“Transit funding is obviously extremely important to the president — the ‘Amtrak President,’ as we may call him,” White House press secretary Jen Psaki said Friday. “But we believe that members can get this work done and can work through these issues quite quickly.”

The senators also appeared to have resolved issues around public water infrastructure funding. The group had an agreement to add $15 billion deal with lead pipe contamination beyond funds already approved in a Senate water bill.

Pointing to the White House’s own website, Romney’s office said the deal on water was always expected to be $55 billion in new spending — not $70 billion as Democrats now want.

The final package would need the support of 60 senators in the evenly split 50-50 Senate to advance past a filibuster — meaning at least 10 Republicans along with every Democratic member. Last week’s test vote failed along party lines.

There are other remaining issues still unresolved around how to pay for it. For instance, details on broadband funding, as well as whether to tap into the leftover COVID relief funds previously passed by Congress, continue to be discussed.

Democrats are seeking a compromise to pay for the package after they rejected a hike in the gas tax drivers pay at the pump and Republicans dashed a plan to boost the IRS to go after tax scofflaws.

Three rounds totaling nearly $70 billion in federal COVID-19 emergency assistance, including $30.5 billion that Biden signed into law in March, pulled transit agencies from the brink of financial collapse as riders steered clear of crowded spaces on subway cars and buses. That federal aid is expected to cover operating deficits from declining passenger revenue and costly COVID-19 cleaning and safety protocols through at least 2022.

Rep. Peter DeFazio, D-Ore., the chairman of the House Transportation and Infrastructure Committee, recently sent a letter with 30 Democrats on the panel warning that the Senate proposal was inadequate and that any deal should incorporate the House-passed $715 billion infrastructure bill, which includes more money for rail and transit.

“The historical share for public transit from the Highway Trust Fund is 20%,” Paul Skoutelas, president of the American Public Transportation Association, said Sunday. “It is the absolute minimum acceptable level to help sustain our nation’s public transportation systems. It is imperative that we make robust, forward looking investments to modernize and expand public transit that will assist in our economic recovery from the COVID pandemic and get Americans back to work.”

Portman appeared on ABC’s “This Week,” Toomey was on CNN’s “State of the Union” and Warner spoke on “Fox News Sunday.”