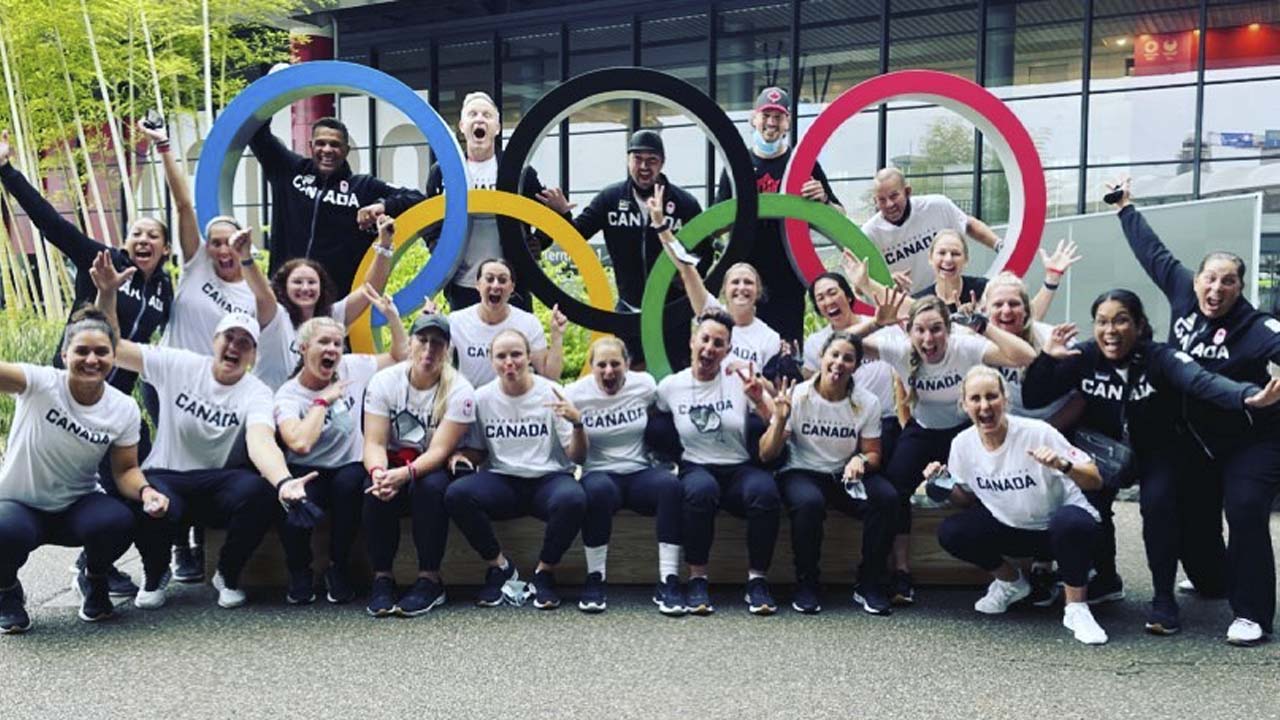 Softball has been reintroduced at the Tokyo Games and a Fresno State professor is there with the Canadian National Team (Photo: Jenn Salling)
Share with friends

It’s been almost five years since softball was discontinued as a sport in the Olympics only to be reintroduced at this year’s Tokyo Games with top contending teams like the U.S., Japan, and Canada vying for gold.

Fresno State professor Wade Gilbert will be there — doing his part to help the squad from his home country reach the pinnacle of athletic achievement.

Gilbert is Canadian by birth and has a master’s degree in human kinetics and a doctorate in the field of psychology from the University of Ottawa. Since coming to the United States, he has been an adviser to the United States Olympic and Paralympic Committee and has worked with a wide variety of sport organizations around the world.

“My wife and I became American citizens a few years ago, so I would be equally as proud and excited to go to the Olympics on an American Team USA experience,” Gilbert said.

Fresno State’s website describes Gilbert as, “an internationally renowned coaching consultant and sport scientist and an award-winning professor” at the university. He and his wife have been teaching at Fresno State for 20 years.

‘”Even though they might be world class athletes, they still get nervous, they still feel stress and pressure and you know, they’re still fragile. So a lot of the work with them is helping them believe they can do the things they’ve been trained to do.”

Gilbert’s primary responsibilities as the mental performance coach for Team Canada is to help build a good team culture, aid the athletes and the coaches in building their confidence and their self belief in their readiness to perform under stress and pressure.

Canadian head coach Mark Smith, who has more than 25 years of softball experience under his belt, knows what it takes to win gold. As a long-time member of the Canadian Men’s National Softball Team, he won three Pan-American Games gold medals in 1979, 1983 and 1991 and a gold medal at the World Championship in 1992.

He has coached the Canadian Women’s National Softball Team since 2009.

Smith recalled meeting Gilbert at a U.S. Olympic Committee conference in Colorado Springs back in 2011, where they immediately hit it off as the only Canadians in attendance. They now share a sense of pride, a strong friendship and an opportunity to work together as colleagues on the Olympic stage vying for a gold medal.

“I had asked Wade to do some work with my staff in 2018,” said Smith. “He had led a few structured sessions around coaching effectiveness and it was extremely helpful. When the opportunity presented itself for him to join the staff and also work with the athletes it was an easy transition.

“As you know, he is world renowned for his work in the area of coaching effectiveness, however has never had an opportunity to attend an Olympic Games and I believe the fact that he is able to work with a Canadian team brings a sense of pride,” Smith added.

Coaching Under State of Emergency

As the Olympics neared, Japan declared a state of emergency amid a surge of new COVID cases. Officials now say there will be no spectators at the games.

Gilbert says, in some ways, athletes may benefit from a lack of fans in the stands.

“On the one hand, it helps because there’s no distractions, there’s no family here, there’s no partners, spouses, kids, you know, that want to talk to you in between games or go out to dinner with you or get pictures, so that in that sense, it actually can help performance because there’s nothing else to think about,” he said.

“So there’s definitely advantages from a performance perspective, but then also disadvantages from an emotional and mental wellness perspective. This is such a rare experience to go to an Olympics and then not to be able to share with your family or your partner it can be pretty hard.”

Smith said navigating through the pandemic has made a huge impact on the team and every other aspect of their lives.

“The opportunity to participate in the most recognized sporting event in the world is unique,” Smith said. “Couple that with a worldwide pandemic that has had a tremendous impact on all aspects of our world and its made this journey all the more interesting.”

Team Canada has taken steps to stay safe. Players and staff are vaccinated and the team travels with a doctor alongside 24/7.

Upon arriving in Japan, the group went into quarantine and was tested every morning.  They have not been allowed to leave their hotel rooms other than to train for one to two hours, after which they are escorted back. Meals are brought to their rooms. 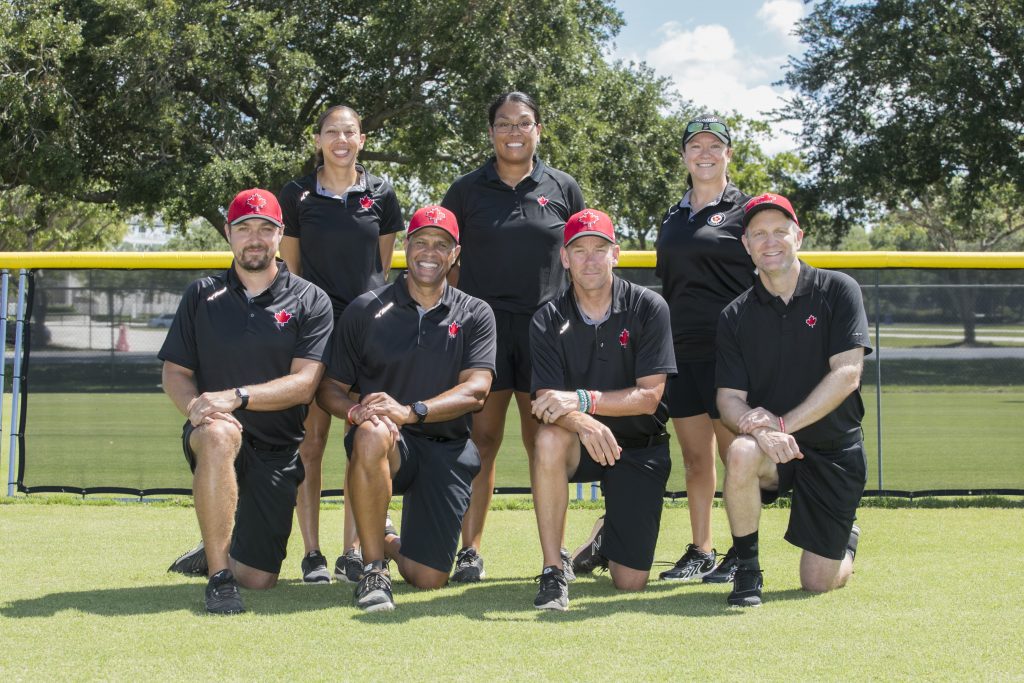 Canadian Women’s Softball is currently ranked at number three in the world following close behind both the U.S. and Japan, who are normally ranked one and two and intermittently flip flop between each other. The team is no stranger to victory, having won the silver medal at the Pan-American Games in 2019 and gold in 2015.

Team Canada are strong Olympic contenders this year, with four experienced veterans who have been to the games before. Medal competition consists of a five game round robin tournament.

Canada will play against Mexico on July 21 before taking on Team USA the following day.  The top teams will battle for gold, while third and fourth place will battle for bronze in games on July 27. 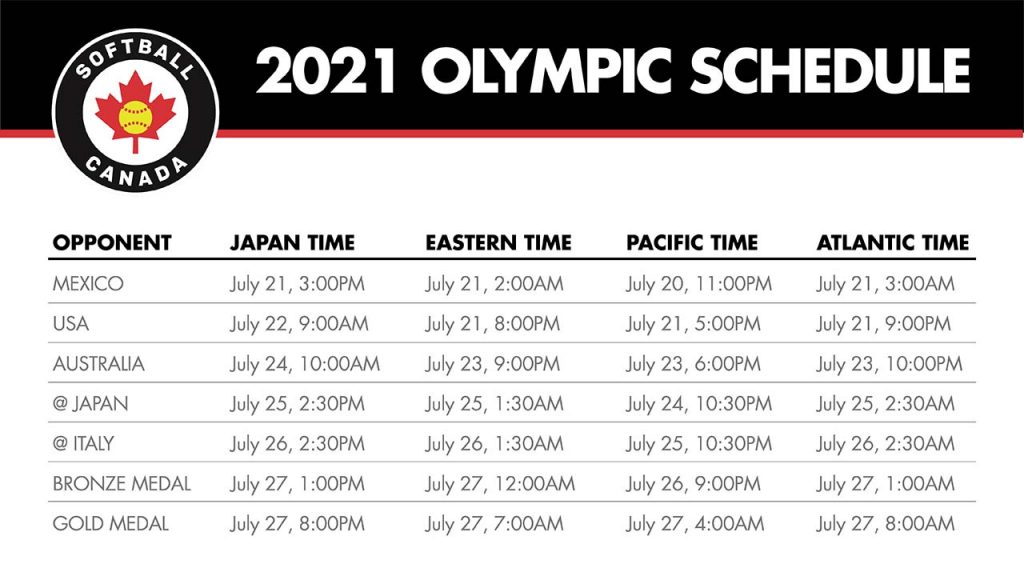