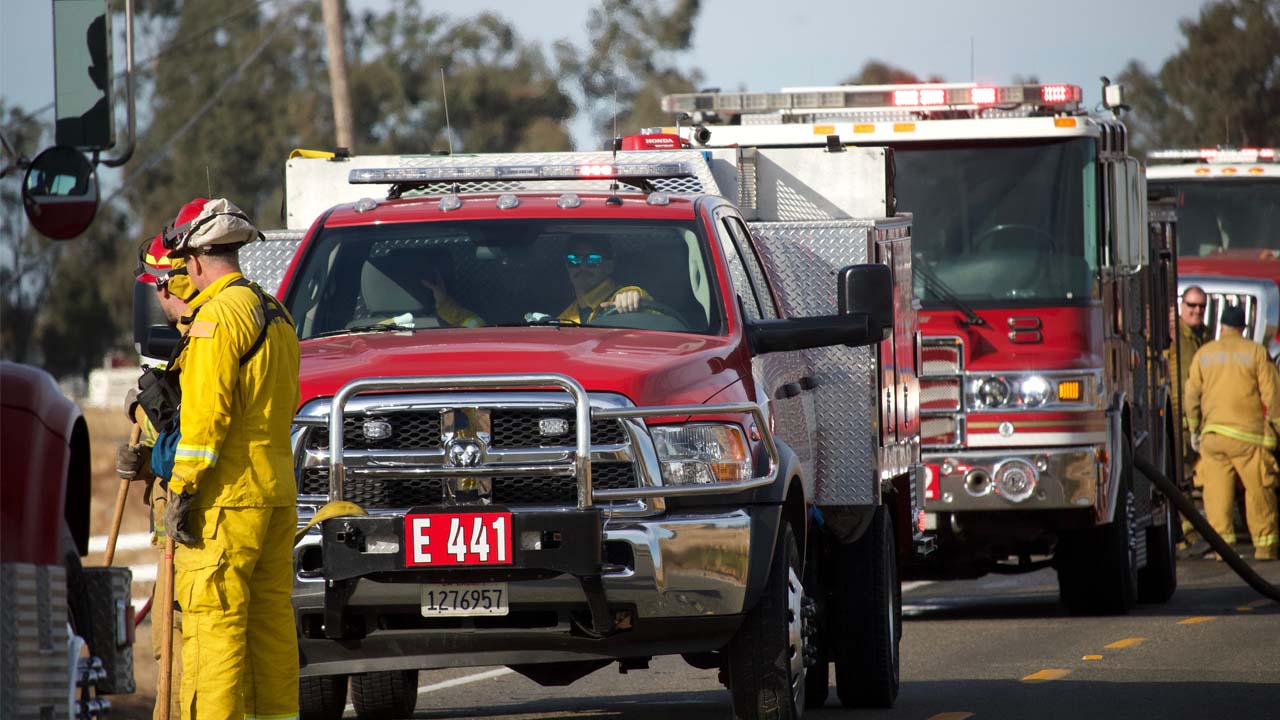 SACRAMENTO — A California inmate firefighter left “half a block of destruction” when he stole a firetruck in an apparent Independence Day escape bid and later tried to carjack a second vehicle, officials said Monday.

The 31-year-old inmate from Orange County was part of an inmate crew fighting a vegetation fire caused by illegal fireworks late Sunday in the Sierra Nevada foothills town of Shingle Springs east of Sacramento, said California’s corrections and firefighting agencies, which jointly oversee the inmate firefighters.

He drove it through a fence onto the nearby Rack-It Truck Racks property where he rammed one of the business’ parked vehicles, a tree and another fence before the rig jumped a curb and became stuck in a ditch, Varao said.

Escape Attempt Causes Half a Block of Destruction

“It’s half a block of destruction from him trying to steer this big truck, which he probably doesn’t know how to drive very well, ricocheting off fences and trees,” Varao said.

Surveillance video from the business shows the firetruck with emergency lights blazing, bouncing through the fence at what appears to be slow speed before circling around inside the property with streams of sparks flying from underneath the vehicle. Other vehicles’ emergency lights are visible in the distance.

“Significant damage was done to the engine as well as private and public property,” the prison and firefighting agencies said in a statement.

With the firetruck disabled, the inmate ran back toward the truck racks business and tried to steal a vehicle from a business employee who was just leaving, Varao said. They fought, but the employee was able to escape back into the business and lock himself inside, while the inmate was unable to start the employee’s vehicle.

The employee was left with “very minor injuries” but was not taken to the hospital, while the inmate was then captured by correctional officers with the help of El Dorado County sheriff’s deputies about a half-hour after the incident began.

Witness Recalls Incident of Inmate on the Loose

Bill Wilde was watching to make sure the fire didn’t spread into his adjacent neighborhood when he saw a fire chief jump into his pickup truck and drive off at a high rate of speed while the remaining inmates were loaded back into their transport vehicle.

“I called home and told them, ‘Lock the doors, there’s an inmate on the loose,’” he said Monday. He then saw and heard the inmate crash the firetruck through the fence and then into the ditch.

But the inmate then ran back the way he came, Wilde said: “He basically made a loop — he didn’t do a very good job getting away.”

The inmate was hospitalized but was in good condition Monday and expected to recover, officials said. He had been in prison since 2015, but officials would not say on what charges, give his name or provide other details, citing the ongoing investigation. They also could not say if there have ever been similar previous incidents.

Employees with the business did not return telephone and emailed messages.

The wildfire was controlled at about 1 acre (0.4 hectares), said Diana Swart, spokeswoman for the state fire agency, Cal Fire.

“It went a little smoother than what it could have, if he’d been able to escape and actually get out on the roadways with that thing,” said Varao. “Fortunately, he can’t drive.”

Biden Calls for Bipartisan Action on Pathway to Citizenship