US Plans to Evacuate Thousands of Afghans Who Helped US 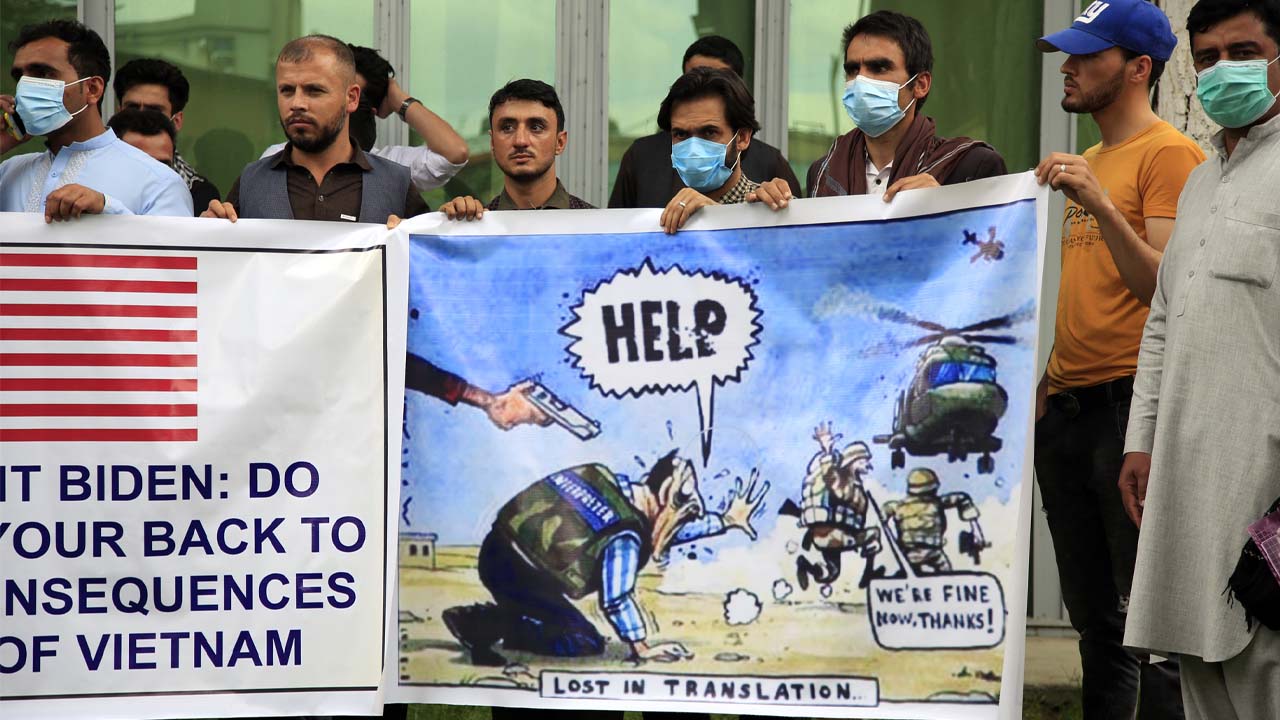 The Biden administration plans to evacuate tens of thousands of Afghan interpreters and others who worked with U.S. forces during the war while their applications for U.S. entry are processed, according to officials familiar with the matter.

A senior administration official said planning has accelerated in recent days to relocate the Afghans and their families to other countries or U.S. territories. The official spoke on the condition of anonymity to discuss unannounced plans.

The administration intends to carry out the evacuation later this summer, likely in August, according to a second official familiar with the deliberations but not authorized to discuss them publicly.

Both officials added that no country or countries for the planned temporary relocation have been settled on. Evacuating Afghans to a U.S. territory is seen as complicated because it could lead to the visa applicants having greater legal rights as they are vetted.

The White House has begun briefing lawmakers on the outlines of the plans.

Process Has Begun to Identify and Relocate Interpreters

The administration has begun to identify a group of interpreters to be relocated before the U.S. completes its drawdown by September, said a senior administration official.

Those individuals have already begun the process of applying for special immigrant visas available to Afghans who assisted Americans during the nearly 20-year-old war. The official stressed that the relocation efforts would comply with U.S. consular law and would be coordinated with Congress.

The White House is planning for a variety of scenarios including “additional relocation or evacuation options” if necessary, the official said.

With U.S. and NATO forces facing a Sept. 11 deadline to leave Afghanistan, the Biden administration has come under increased pressure from lawmakers, veterans and others to evacuate thousands of Afghans who worked as interpreters or who otherwise helped U.S. military operations there in the past two decades.

“We have a moral obligation to protect our brave allies who put their lives on the line for us, and we’ve been working for months to engage the administration and make sure there’s a plan, with few concrete results,” Republican Rep. Peter Meijer of Michigan said during a House hearing last week.

Administration Has Not Publicly Stated Support of Mass Evacuation

Despite unusual bipartisan support in Congress, the administration hasn’t publicly gone on record in support of an evacuation as it unwinds a war that started after the 9/11 attacks.

The Biden administration and U.S. military officials have spoken carefully about relocation — and largely sidestepped talk of a mass evacuation — amid growing concerns about the precarious security situation for the Afghanistan government in the face of diminished U.S. military presence. In part, U.S. officials have been concerned that word of an evacuation could trigger a panic in Afghanistan, not to mention further complicate the present security situation.

The Taliban issued a statement earlier this month saying those who worked for U.S. and Western interests would not be targeted. Still for many the runaway corruption, deep insecurity and fear of violence from the Taliban and the many heavily armed U.S.-allied warlords has many Afghans seeing the special immigration visas as their last chance to leave their war-tortured nation.

As part of its plan, the White House will also push to have additional resources devoted to processing special immigration visa applications to help those who remain in Afghanistan after the U.S. military drawdown but want to leave for the U.S, according to the official.

The official added that the administration is looking to work with Congress to find quick fixes to make the application process more efficient including eliminating duplicative paperwork and adjusting requirements that do not affect national security.

The move to accelerate plans to relocate Afghans who helped the U.S. effort comes as Biden is set to meet on Friday with Afghan President Ashraf Ghani and Abdullah Abdullah, chairman of the High Council for National Reconciliation.

Rep. Michael McCaul, the top Republican on the House Foreign Affairs Committee, said on Twitter the evacuation plan was “great news” but urged President Joe Biden to push his effort to “secure a safe 3rd country to host them into high gear.”

McCaul, of Texas, added Biden “has the ability to save tens of thousands of lives if he takes steps to implement this evacuation immediately.”

Rep. Seth Moulton, a Massachusetts Democrat who has been pushing the administration to move more quickly on the issue, said Thursday he had not yet seen details of the White House plan.

“As a Marine, I want to see a specific plan,” Moulton said. “I want to see an operational plan to know how this is going to unfold and have confidence that it will be successful.”

Advocates applauded the news, saying the backlog of special immigrant visa applications was too great to overcome even with measures to accelerate the process.

“We need an emergency evacuation now,” said Krish O’Mara Vignarajah of the Lutheran Immigration and Refugee Service, a group that resettles refugees in the U.S. “Every day, we are haunted by stories of our allies being attacked, harassed and even killed by members of the Taliban.”

The stepped-up relocation effort was first reported by The New York Times.

Border Patrol Chief Who Supported Trump’s Wall Is Forced Out