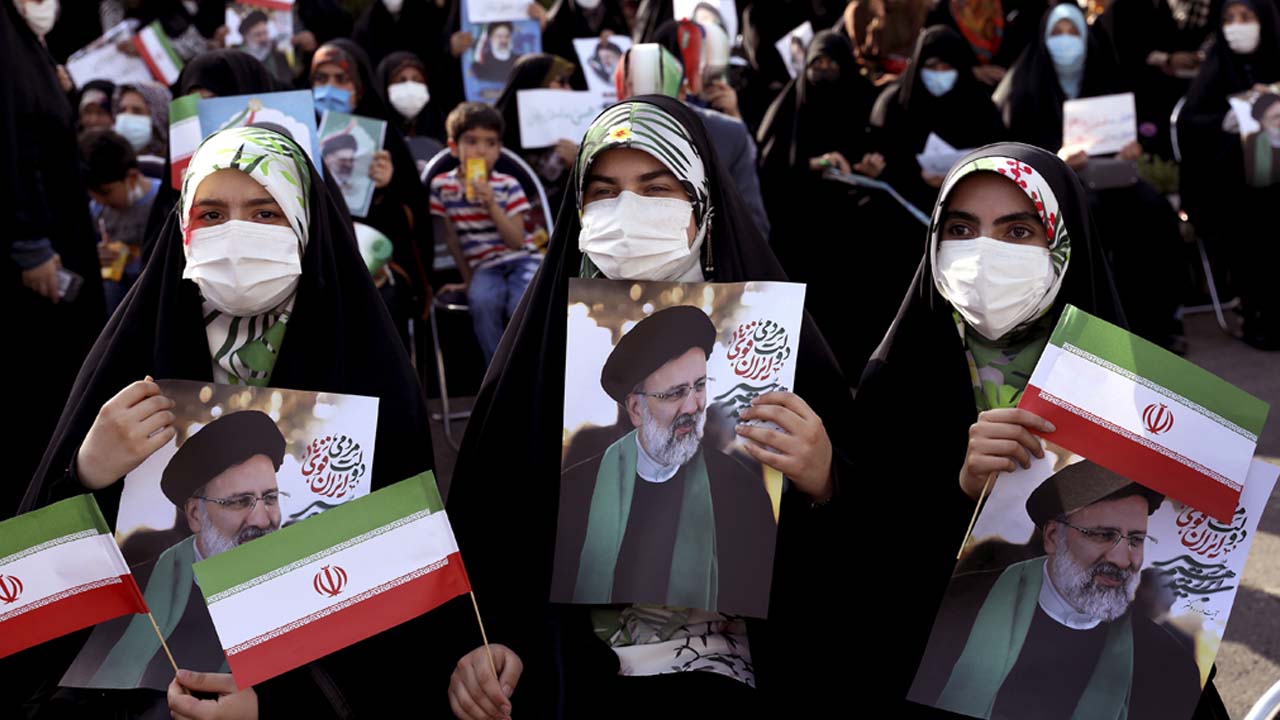 DUBAI, United Arab Emirates — Iran grappled with fears of low voter turnout two days ahead of its presidential election as the race narrowed on Wednesday into a showdown between the country’s hard-line judiciary chief and moderate former Central Bank chief.

Supreme Leader Ayatollah Ali Khamenei warned of a foreign conspiracy to undermine the vote while the country’s Interior Ministry acknowledged a startling lack of competition that was turning the election into a coronation for Khamenei’s protégé, hard-liner Ebrahim Raisi.

In an extensive televised speech, Khamenei railed against the media’s grim portrayal of the poll and tried to cajole people into voting, warning of “increased pressure” from Iran’s “enemies” if citizens stay away from the polls on Friday.

Iran’s clerical vetting body had barred a range of prominent reformists and key allies of relatively moderate President Hassan Rouhani to run in this election, giving the green light to just Raisi and several low-profile candidates, mostly hard-liners with little popular support. The Guardian Council’s evisceration of any viable challengers has sparked widespread criticism and fueled calls for a boycott.

Voter apathy was running deep even before the disqualifications, due in part to the devastated economy and subdued campaigning amid a surge in coronavirus cases. The state-linked Iranian Student Polling Agency most recently projected a 42% turnout from the country’s 59 million eligible voters, which would be a historic low.

At a press conference, the interior minister admitted it was no real contest.

“The actual competition in the elections is not a very serious one … considering the actions of the Guardian Council,” said Abdolreza Rahmani Fazli. “We can say that the reasons are the weak competition and the coronavirus situation.”

That left Khamenei and top officials the task to try lure the disillusioned public back to the polls. Iranian authorities have promoted voter turnout as validation for their style of governance after the 1979 Islamic Revolution installed the clerically overseen system that endures today.

Khamenei lashed out against Iran’s “enemies” for discouraging people from voting. He accused “American and British media and their mercenaries” of “killing themselves to question the elections and weaken popular participation.”

He also acknowledged that many ordinary Iranians, impoverished and battered by years of heavy American sanctions, may not see the benefit of political participation.

“But not voting because of (economic) complaints is not correct,” Khamenei said.

Meanwhile, two hard-line candidates withdrew Wednesday, throwing their support behind presumed front-runner Raisi. The only reformist candidate in the vote also dropped out, making former Central Bank chief Abdolnasser Hemmati the main moderate contender. Such dropouts are common in Iranian presidential elections in order to boost the chances of similar candidates. No campaigning is allowed on Thursday, 24 hours before polls open.

Within Iran, candidates exist on a political spectrum that broadly includes hard-liners who want to expand Iran’s nuclear program and confront the world, moderates who hold onto the status quo and reformists who want to change the theocracy from within.

Alireza Zakani, a conservative lawmaker who became known for his vocal opposition to Tehran’s 2015 nuclear deal with world powers, dropped out and said he would vote for Raisi. Soon after, Saeed Jalili, the top nuclear negotiator for former hard-line President Mahmoud Ahmadinejad at the height of Western concerns over Tehran’s nuclear program, followed suit. Over 200 lawmakers in parliament, which is dominated by hard-liners, urged the remaining hard-line contenders to withdraw and back Raisi’s bid.

Hemmati Announces Zarif as His VP or Foreign Minister Pick

In remarks Wednesday, Hemmati sought to rally the pro-reform vote and position himself as a stand-in for Rouhani, who is term-limited from running again. He announced that he’d select current Foreign Minister Mohammad Javad Zarif to join his administration as either vice president or foreign minister, embracing the top diplomat who was an architect of Tehran’s now-tattered nuclear deal.

“The economic development of Iran is not possible without strong diplomatic engagement abroad,” Hemmati tweeted, explaining his choice of Zarif. “My administration is after the removal of sanctions and use of foreign policy to achieve political development.”

Zarif, among the best-known political figures in Rouhani’s administration, has come under fire from the political establishment recently, following the leak of a contentious audiotape in which he offered a blunt appraisal of power struggles in the Islamic Republic.

There was no immediate word from Zarif on Hemmati’s announcement, but the minister has previously indicated a willingness to join the incoming administration.

Raisi the Favorite Despite Drawing Skepticism

Polling and analysts indicate that Hemmati lags behind Raisi, the current judiciary chief cultivated by Khamenei.

Raisi has drawn deep skepticism from the West, in part for running a judicial system that remains one of the world’s top executioners and sees the Revolutionary Courts operate many trials behind closed doors. His alleged involvement in human rights abuses dates back to a mass execution of political prisoners at the end of the Iran-Iraq war in 1988.

Despite anti-virus restrictions, thousands of Raisi supporters mobbed a stadium in the northwestern city of Tabriz on Wednesday, with only some wearing masks. Roaring crowds chanted, “No one but Raisi, Iran’s final word!” as he took the stage and repeated campaign promises to alleviate the suffering of Iran’s poor.

Raisi’s ascendancy comes at a delicate time for the region, as Iran and the United States negotiate a return to Tehran’s historic atomic accord with world powers that gave Iran sanctions relief in exchange for curbs on its nuclear program.

Leaders Plead for People to Vote

But even as the narrowing of the field boosted his bid, politicians cross the ideological spectrum appeared most concerned with whether Iranians would vote at all — or defy the leadership and stay home.

In a statement, Iran’s powerful Revolutionary Guard likened casting a ballot to “hitting enemies with a pinpoint missile.”

Rouhani, who had publicly protested the Guardian Council’s rejection of high-profile nominees from his own administration, pleaded with people to vote.

“Going to polling stations in present circumstances … makes us more powerful,” he said.

In video widely shared on social media Wednesday, influential reformist movement leader and former President Khatami also asked Iranians to “make an effort, show up and vote,” despite their disappointment.