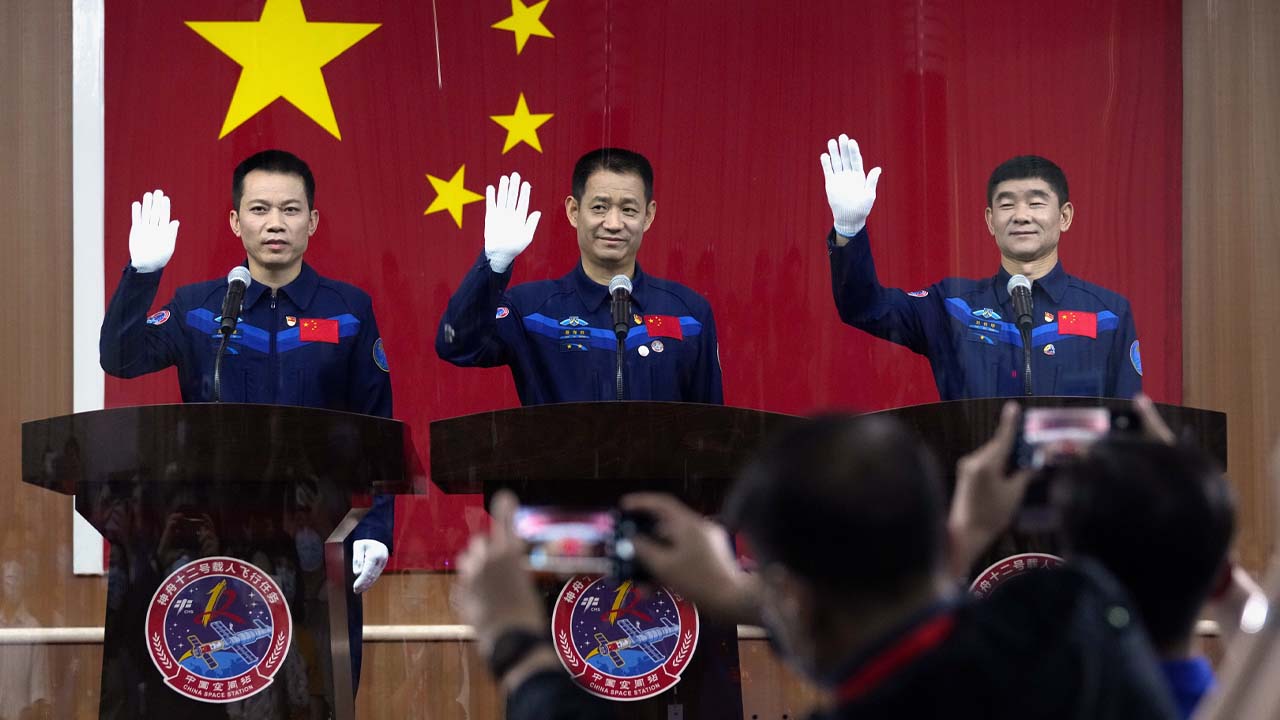 JIUQUAN, China — The three members of the first crew to be sent to China’s space station say they’re eager to get to work making their home for the next three months habitable, setting up testing and experiments and preparing for a series of spacewalks.

The three met with reporters Wednesday from inside a germ-free glassed-in room, hours before they were to blast off on Thursday morning.

“First of all, we need to arrange our home in the core module, then get started on a whole range of diagnostic tests on crucial technology and experiments,” said mission commander Nie Haisheng, 56, the most senior of the three who is making his third trip to space.

“The task is very arduous and there are many challenges. My colleagues and I will cooperate closely, operate carefully and overcome all difficulties,” Nie said.

Unsurprisingly, all said they had complete confidence in the mission, which carries special political meaning for the ruling Communist Party as it prepares to celebrate its centenary next month.

Liu Boming, 54, whose one previous flight in 2008 included China’s first spacewalk, said there would be multiple such activities during the mission as the astronauts carry out their science experiments, conduct maintenance and prepare the Tianhe, or Heavenly Harmony, core module to receive two other modules to be sent up next year.

Thursday’s launch begins the first crewed space mission in five years for an increasingly ambitious space program. China has sent 11 astronauts into space since becoming the third country to so so on its own in 2003, and has sent orbiters and rovers to the moon and Mars.

The astronauts will be traveling in the Shenzhou-12 spaceship launched by a Long March-2F Y12 rocket set to blast off from the Jiuquan launch center in northwestern China.

While the first Tianhe crew are all men, women will be part of future crews, officials have said.

Beijing doesn’t participate in the International Space Station, largely due to U.S. concerns over the Chinese space program’s secrecy and its military connections. Despite that, foreign science missions and possibly foreign astronauts are expected to visit the Chinese station in the future, China Manned Space Agency Assistant Director Ji Qiming told reporters at Jiuquan.

“Outer space is the common wealth of people all over the world, and exploring the universe is the shared cause of all mankind,” Ji said.

“We are willing to carry out international cooperation and exchanges with all countries and regions worldwide that are committed to the peaceful use of outer space,” Ji said, adding that existing cooperation is being expanded with countries including Russia, Italy and Germany along with the United Nations Office for Outer Space Affairs.

Ji conceded the construction of the Chinese station had come “relatively late,” but said that was also an advantage because it allowed China to use the latest technologies and concepts, particularly in the areas of reliability and safety.

“The construction and operation of China’s space station will raise our technologies and accumulate experience for all the people. It is a positive contribution by China for human exploration of the universe, peaceful utilization of outer space and push forward the building of a community of shared future for mankind,” he said.

Several Missions Planned Through Next Year to Complete Station

The mission is the third of 11 planned through next year to add the additional sections to the station and send up crews and supplies. The main living section of the station was launched in April while the other two modules will be primarily for scientific work.

The mission builds on experience China gained from earlier operating two experimental space stations. It also landed a probe on Mars last month that carried a rover, the Zhurong, and earlier landed a probe and rover on the moon and brought back the first lunar samples by any country’s space program since the 1970s.

Once completed, the station will allow for stays of up to six months, similar to the much larger International Space Station.

All astronauts will have their own living area, and a stationary bike and other exercise equipment will allow them to counter some of the effects of weightlessness. They’ll also be able to bring personal items to remind them of home and stave off boredom while not working, Nie said.

The Chinese station reportedly is intended to be used for 15 years and may outlast the International Space Station, which is nearing the end of its functional lifespan.

The launch of Tianhe was considered a success although China was criticized for allowing the uncontrolled reentry to Earth of part of the rocket that carried it into space. Usually, discarded rocket stages reenter the atmosphere soon after liftoff, normally over water, and don’t go into orbit.

The rocket blasting off Thursday is of a different type, and Ji dismissed concerns about it or the models used for cargo missions posing a threat when they reenter. China published their trajectories and they are expected to burn up long before they could be a danger, he said.

GM, Ford Outdo Each Other With Electric Vehicle Investments