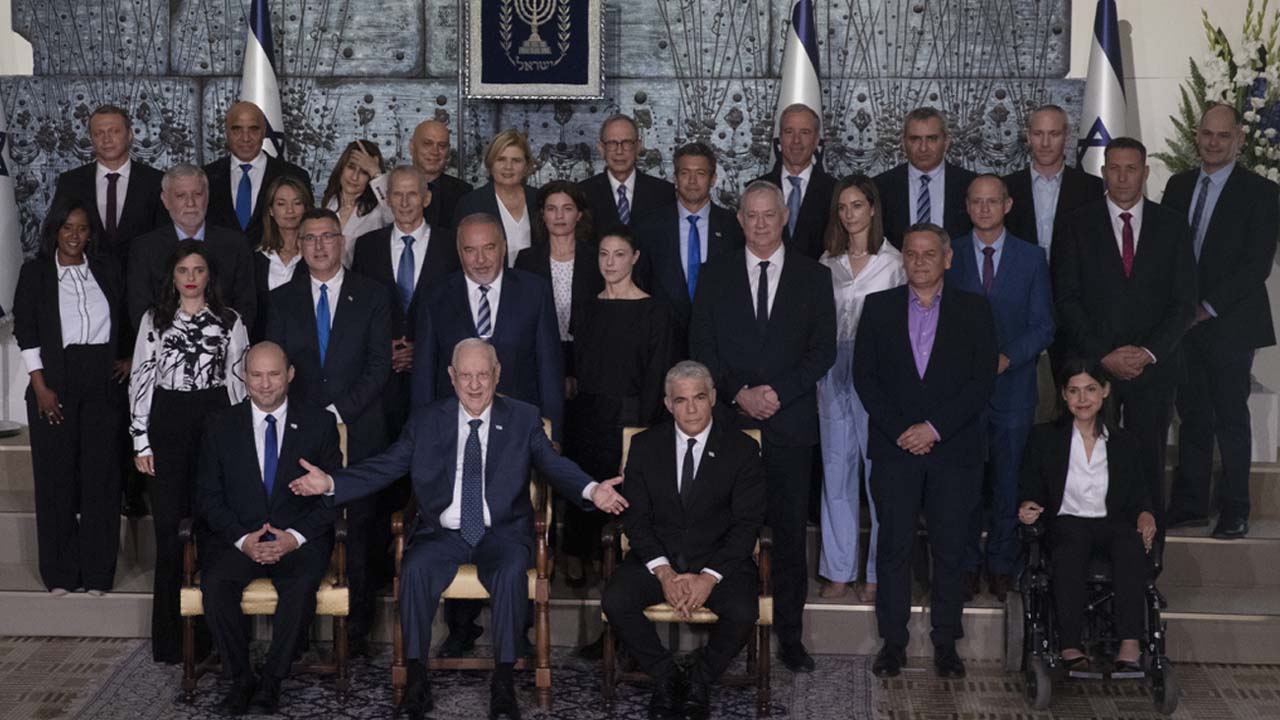 JERUSALEM — Israel’s new governing coalition promised to reach out to neglected foreign allies as well as to heal divisiveness at home after securing a razor-thin margin to oust Benjamin Netanyahu. But the longtime leader showed no signs of backing down, vowing Monday to depose his rivals and saying he was cheated out of power.

Newly minted Prime Minister Naftali Bennett held a brief handover meeting in the afternoon with his predecessor, but without the formal ceremony that traditionally accompanies a change in government — a sign of Netanyahu’s lingering anger and hostility toward the new government.

Bennett now presides over a diverse and fragile coalition comprised of eight small and midsize parties with deep ideological differences — but promised to try to heal the divided nation. Netanyahu serves as the opposition leader.

David Bitan, a Likud lawmaker, told Kan public radio that Netanyahu did not hold a formal handover ceremony with Bennett because he feels “cheated” by the formation of the Bennett-Lapid government and “doesn’t want to give even the slightest legitimacy to this matter.”

The coalition includes three parties that are headed by politicians who used to be Netanyahu allies, including Bennett. Although they share Netanyahu’s hardline ideology on many issues, the three leaders clashed with the divisive former prime minister over his personality and leadership style.

Under a coalition agreement, Bennett will hold the office of premier for the first two years of the term, and then Foreign Minister Yair Lapid, the architect of the coalition, will become prime minister.

The new government was sworn in late on Sunday and went to work on Monday morning. Outgoing President Reuven Rivlin, who finishes his term next month, hosted Bennett, Lapid and the rest of the Cabinet at his official residence in Jerusalem for a photo of the new government. Bennett and Lapid made no comment to journalists after.

Netanyahu Says He was Cheated Because Former Partners Abandoned Him

Netanyahu, meanwhile, convened the first meeting of the political opposition, where he called on his partners to show “iron discipline” to depose “this dangerous leftist government, the fraud government” — though for the moment there is not much he can do beyond hoping to exploit their differences.

Netanyahu believes he was cheated because his Likud Party remains by far the largest faction in parliament and because so many of his former partners abandoned him.

The politician remains on trial on corruption charges. Netanyahu has denied wrongdoing, and his new status as opposition leader has no legal impact on the trial, which is expected to continue for months and even years. But after leaving the prime minister’s office, he has lost a major political platform that he often used to fight the charges by lashing out against police, prosecutors and the media and rallying his supporters.

With a new government in place, Netanyahu also appears to have lost hopes for holding a new election that could potentially deliver a coalition stacked with supporters who are open to granting him immunity from prosecution.

World leaders welcomed Bennett to his new role after a two-year period of political paralysis in which the country held four deadlocked elections.

Indian Prime Minister Narendra Modi, who shared close ties with Netanyahu, congratulated Bennett in a tweet in Hebrew, saying he “looks forward to meeting you and deepening the strategic relations between our countries.” Modi also noted his “deep recognition” of Netanyahu’s leadership.

The United Arab Emirates, which established diplomatic relations with Israel last year as part of the so-called Abraham Accords orchestrated by the Trump administration, said it was looking “forward to working together to advance regional peace, strengthen tolerance and coexistence, and embark upon a new era of cooperation in technology, trade, and investment.”

Lapid, the foreign minister, spoke with U.S. Secretary of State Antony Blinken and “discussed the special relationship between the US and Israel,” he wrote on Twitter.

At a handover ceremony at the Foreign Ministry in Jerusalem, Lapid told diplomats that Israel’s foreign relations had suffered from “disgraceful neglect” in recent years. He pledged to mend relations with neighboring Jordan, the European Union, the Democratic Party in the U.S. and American Jews — relations that Lapid said had deteriorated under Netanyahu.

“The outgoing administration took a terrible gamble in focusing only on the Republicans and abandoning Israel’s bipartisan standing,” Lapid said. He added that Israel’s ties with American Jews were “the most important relationship, and the one that needs to be worked on more than any other.”

But echoing Bennett’s remarks from Sunday, Lapid said Israel remains opposed to a return to a nuclear agreement reached between world powers and Iran that former President Donald Trump pulled the U.S. out of. Negotiators are now looking to revive that accord, and Lapid said that Israel would “prevent by all means the possibility of Iran getting nuclear weapons.”

Bennett Faces Challenge of Keeping Coalition and Divided Israel Together

Bennett, 49, became prime minister after Sunday’s 60-59 vote in Knesset, capping a chaotic parliamentary session. The motion passed after a member of the coalition was taken by ambulance from hospital to the parliament building to cast her vote, and despite an abstention by a coalition member from the Islamist Raam party.

Bennett faces a challenge of holding the tenuous coalition together and said he is prioritizing mending the many rifts dividing Israeli society.

His ultranationalist Yamina party won just seven seats in the 120-member Knesset in March elections. But by refusing to commit to Netanyahu or his opponents, Bennett positioned himself as kingmaker. Even after one member of his religious nationalist party abandoned him to protest the new coalition deal, he ended up with the post of premier.

To his supporters, Netanyahu is a global statesman uniquely capable of leading the country through its many security challenges.

But to his critics, he has become a polarizing and autocratic leader who used divide-and-rule tactics to aggravate the many rifts in Israeli society, including tensions between Jews and Arabs, and within the Jewish majority between his religious and nationalist base and his more secular and dovish opponents. Some had also questioned his ability to remain in office while on trial.