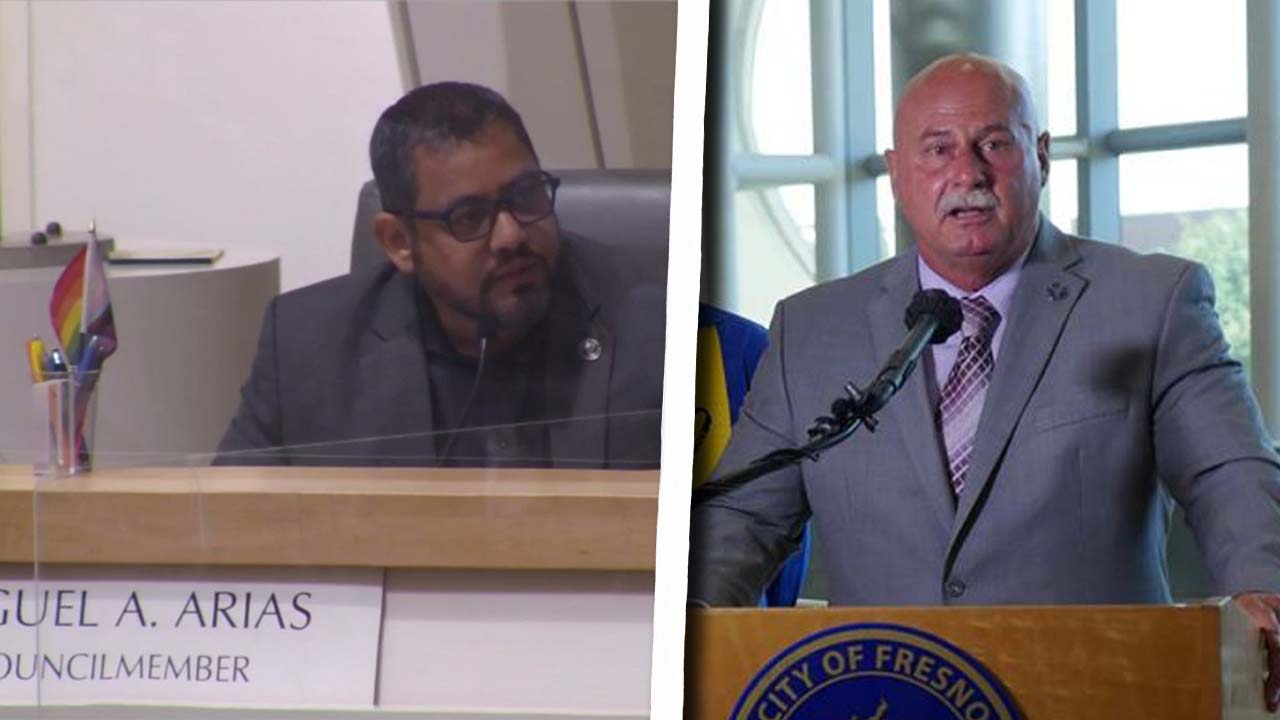 Less than a day before the Pride flag is hoisted at Fresno City Hall, one councilman is directing criticism at Mayor Jerry Dyer over his handling of the recognition of the LGBTQ+ community.

Councilman Miguel Arias said city government in the last week lost focus on fixing playgrounds and streets among other things.

“We’ve all been distracted, you know, over a single pole and a flag. In my view, the mayor chose to stir up a city over this single item that has been mistakenly been described by him and others as a cause, which it is not,” Arias said during Thursday’s council meeting.

“I continue to see Eaton Plaza as a way to compliment ceremonies that occur at City Hall in terms of flag raising and serving as an alternative site on some of the other occasions where maybe the flag will be raised in City Hall but can be at Eaton Plaza,” Dyer said.

A ceremony is scheduled for Friday, starting at 10 a.m.

Dyer asked the City Council to create a policy of what flags can fly in front of City Hall. They did on May 27, but Dyer expressed his displeasure. He was concerned that by shifting the responsibility away from the city manager to the council, undesirable flags would be flown.

On June 3, Dyer offered an alternative — install flag poles at Eaton Plaza, two blocks away from City Hall. His plan is to allow any group, likely on a first come, first served basis, to fly their banner.

The next day, Dyer reversed course. He would allow the Pride flag to be flown at City Hall. Eaton Plaza would be in addition to use of City Hall poles.

“While I’m happy that he’s seen the error in his ways and judgment, he’s also created a new unnecessary problem that this council will be forced to address. His hasty attempt to repurpose Eaton Plaza park and installing seven flagpoles without clear purpose, community or council support has created a whole new set of questions for me this week from my constituents,” Arias said.

Dyer said he has a constituency too. His constituency, Dyer said, generally supported his move.

“We serve a very diverse constituency in Fresno and perhaps my constituency is a little broader than one of the districts. And so that’s why maybe I received a little bit more of a balanced approach,” Dyer said.

No Motion ‘Out of Respect’

Arias said that he would not be making a motion on Eaton Plaza “out of respect” to his colleagues. He did say such a future motion would not allow staff to repurpose Eaton Plaza.

He also had issues with Dyer wanting to rename the portion of Eaton Plaza where the flags are being installed as “Unity Park.” The councilman and Dyer have been going back and forth whether the area is covered under existing city planning documents.

“Despite some of the false claims on Facebook, Eaton Plaza does have a master plan, and it’s had since 2004. The repurposing of public land and renaming of a park is a city council determination, not one made by the administration alone. And it would be another grave mistake if the administration made a decision to operate, operationalized or repurpose or rename the plaza without consulting with our office and seeking council action,” Arias said.

Dyer said the “Unity Park” name would be unofficial.

“It was simply referred to as a unity park, just a place that people could come together in the park and celebrate. And so there’s no desire on my part to rename it, contrary to what one of the councilmembers said,” Dyer responded.

In a rebuttal, Arias said it was “extremely frustrating” that city staff is installing poles, when broken items in the city remain unfixed.

Dyer has until 11:59 p.m. on Friday to veto the council’s flag policy ordinance.