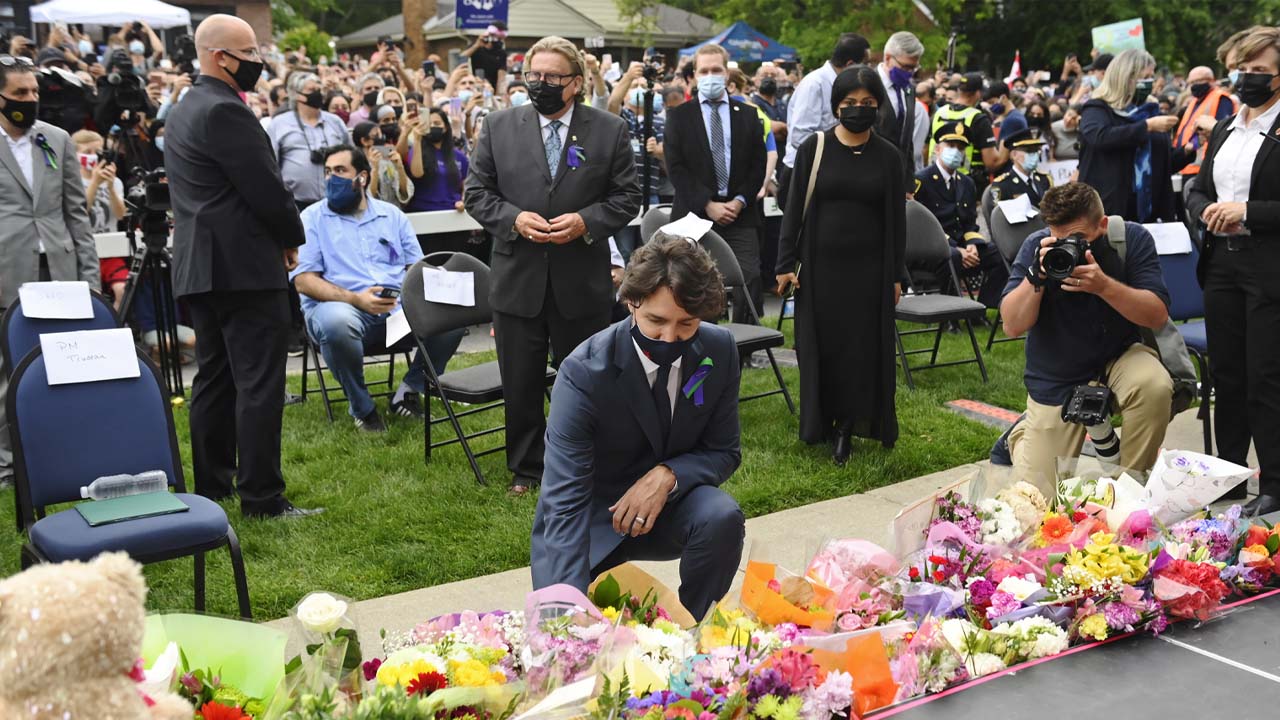 TORONTO — A pickup truck attack that killed four members of an immigrant family has shaken Canada, a country where immigrants are largely accepted, and drew denunciations Tuesday from Canada’s prime minister, who called it a hate crime directed at Muslims.

The victims — two parents, two children and a grandmother — were on an evening walk when the driver of the truck struck them at an intersection in London, Ontario. The sole survivor was a 9-year-old boy, who was hospitalized.

“This was a terrorist attack, motivated by hatred, in the heart of one of our communities,” Prime Minister Justin Trudeau told Parliament. “If anyone thinks racism and hatred don’t exist in this country, I want to say this: How do we explain such violence to a child in a hospital? How can we look families in the eye and say “Islamophobia isn’t real”?

The victims’ extended family issued a statement identifying the dead as Salman Afzal, 46; his wife Madiha, 44; their daughter Yumna, 15; and a 74-year-old grandmother whose name was withheld. The hospitalized boy was identified as the couple’s son, Fayez. Friends said the family immigrated to Canada 14 years ago.

Many Canadians have been enjoying evening walks to get fresh air after long days at home during the pandemic, Trudeau said.

“But unlike every other night, this family never made it home,” Trudeau said. “Their lives were taken in a brutal, cowardly and brazen act of violence. This killing was no accident. … Canadians are outraged by what happened on Sunday. And many Muslim Canadians are scared.”

Trudeau said words matter and in part blamed rhetoric, disinformation and extremism online and in politics.

“They can be a seed that grows into an ugly, pervasive trend. And sometimes, they lead to real violence,” the prime minister said.

20-Year-Old Suspect Arrested Nearby and Under Investigation

A 20-year-old suspect, Nathaniel Veltman, was arrested in the parking lot of a nearby mall. He was facing four counts of first-degree murder. Police were inside the suspect’s London apartment on Tuesday.

Police said Veltman did not know the victims. Detective Supt. Paul Waight said it was not clear if he belonged to any specific hate group, but that local police were working with federal authorities to investigate potential terrorism charges. He said the attack was planned.

Veltman worked part time at an egg farm in nearby Strathroy, Ontario. The chief executive of Gray Ridge Eggs Inc., William Gray, gave no details about Veltman’s job. He said the company was “shocked and saddened” by the attack, and he expressed sympathy for the victims’ relatives and the Muslim community.

Arman Moradpourian, a friend who worked with Veltman, called Veltman a very devout Christian and said he was home schooled. Moradpourian said Veltman didn’t have a problem with him being Persian and raised Muslim.

“He never judged me,” Moradpourian told The Associated Press. “He would give his shirt off his back for you.”

Moradpourian said Veltman helped him with rides to grocery stores and helped him mediate family issues. He said Veltman deleted his social media years ago and remade it a few months ago. He said he used the same name but said it was deactivated after he was arrested. He said Veltman was into video games and fishing.

Everyone who knew the Afzal family knew “the model family they were as Muslims, Canadians and Pakistanis,” the statement from the extended family said. “They worked extremely hard in their fields and excelled. Their children were top students in their school and connected strongly with their spiritual identity.”

A fundraising webpage said the father was a physiotherapist and cricket enthusiast and his wife was working on a doctorate in civil engineering at Western University in London. Their daughter was finishing ninth grade, and the grandmother was a “pillar” of the family, the page said.

Thousands of mourners including Trudeau and the leaders of all of Canada’s political parties attended a vigil Tuesday night at the mosque the family attended. Pandemic restrictions were eased to allow mourners to attend the outdoor vigil.

The Fight Against Racism and Discrimination

Imam Abd Alfatah Twakkal of the London Muslim Mosque said he hoped the vigil would be a pivotal moment for his community and country in the fight against the scourge of racism and discrimination.

“Every single one of us need to do our part,” he said.

Rauf Ahmad and three friends earlier watched the growing tribute at the intersection in the day.

“I didn’t think there was racism in Canada, and I felt very safe when I came here two years ago, but I do not feel safe now,” Ahmad said. “Humanity is first. We should not care about whether someone is a Muslim, a Jew or a Christian.”

Near the crash scene, Zahid Khan, a family friend, said through tears: “They were just out for their walk that they would go out for every day. I just wanted to see.”

Canada is generally welcoming toward immigrants and all religions, but in 2017 a French Canadian man known for far-right, nationalist views went on a shooting rampage at a Quebec City mosque that killed six people.

“Canada is not immune to the kind of intolerance and division we have seen elsewhere in the world,” Trudeau said.