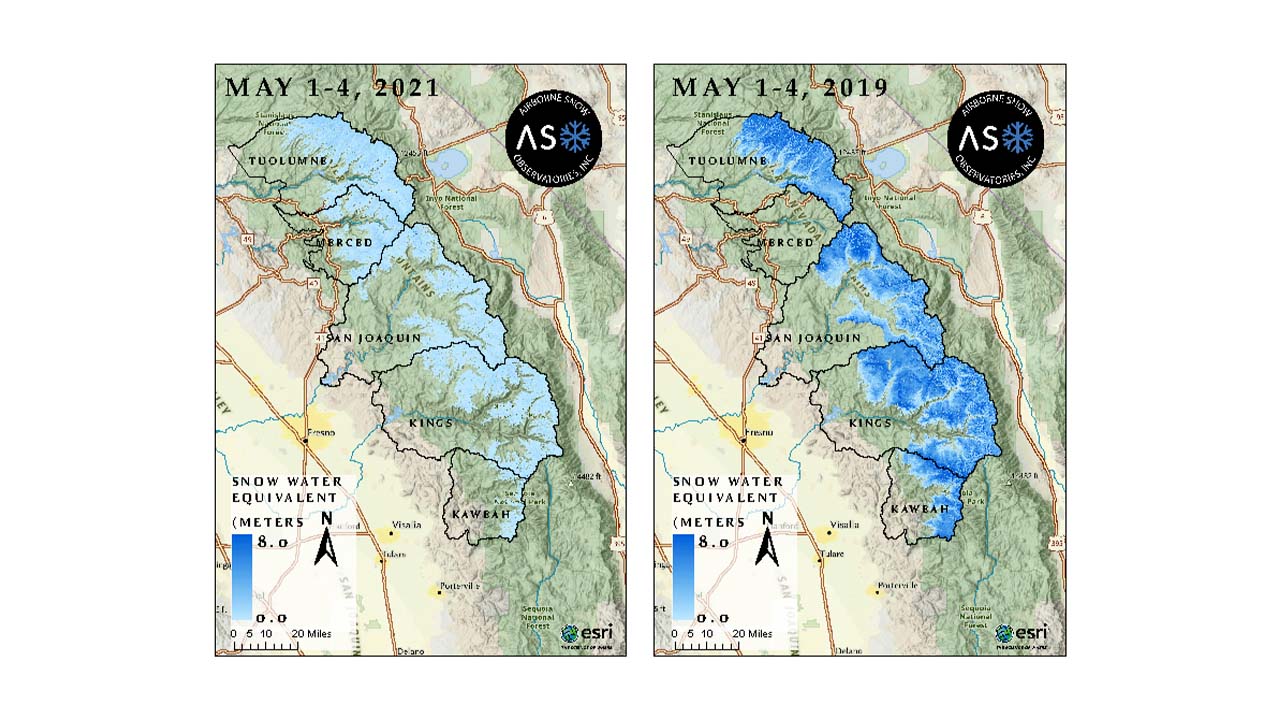 In a pitifully dry year like 2021, understanding the state’s skimpy snowpack is critical.

Multi-million dollar decisions can hinge on even the smallest amounts of snowmelt squeezed out of the Sierra Nevada mountains.

Which makes the information provided by Airborne Snow Observatories, Inc. flights vital, according to water managers.

“Right now, there’s still 10,000 to 20,000 acre-feet of variability in the (run-off) forecasts,” in the Kings River watershed, said Steve Haugen, Kings River watermaster. “That may not sound like a lot, but it can mean the difference between some districts being able to run water or not.”

In terms of value, that much water could be worth $12.5 million to $25 million considering at least one ag district has set its price at $1,250 per acre-foot this year.

Tricky Calculations in the Mountains

But pinpointing how much snow is actually in the mountains, especially at the highest elevations, has been tricky.

“If you look at it like you’re balancing your checkbook, under one method, it shows you have $8 to $10 and another methodology shows $5,” Haugen said. “You’re left asking ‘What do I really have?’ ”

This drought, he said, data from ASO flights is giving Haugen and others a far more refined picture of what to expect – or not.

“It’s as important in a drought as it is in a flood year,” Haugen said of ASO data.

It was through ASO flight data that water managers learned just how little snow there is this year at the highest elevations.

“Any data you can get on snowpack is crucial, particularly this year.” — Michael Jackson, South-Central California manager, Bureau of Reclamation

That would have been impossible to know without ASO as snow sensors are placed at lower elevations, said Tom Painter, a snow hydrologist and chief executive officer of ASO. Painter helped develop the technology used by ASO when he was working at NASA’s Jet Propulsion Laboratory in Pasadena and later formed the company.

The lack of snow high in the mountains is unusual, Painter said. ASO data showed snow accumulation dropped off significantly above 11,000 feet.

Typically there is more snow the higher up you go and that snow comes down as runoff later in the season.

“But it’s looking like there will be an abrupt drop-off,” he said.

Snowmelt at lower elevations has been soaked up by parched forest floors after an intensely dry fall so run-off was already reduced.

That, combined with lack of high elevation snow will be a “double whammy” to the water supply this year, Painter said.

ASO data, he said, gave water managers a heads up so they could work out how best to distribute the meager supplies.

ASO uses LiDAR and spectrometer imaging to determine snow depth and water content. LiDAR stands for light detection and ranging, and uses light pulses to measure distance. ASO compares pre-winter distances to those after snowfall to measure the snowpack. Spectrometer imaging gives a three-dimensional representation of data which helps ASO understand how much water the snow holds.

Costs for ASO flights vary depending on the watershed.

For the Kings River watershed, 10 flights plus data processing, modeling, and forecasts, costs about $1.4 million. But Painter noted that information gives water manager information that saves far more money down the line.

Tom Painter helped develop the technology used by ASO when he was working at NASA’s Jet Propulsion Laboratory in Pasadena and later formed the company.

Data from ASO proved so helpful in its pilot phase starting in 2013 that numerous water agencies ponied up their own money to have ASO fly their watersheds and lobbied the Department of Water Resources to help fund more flights.

The state doesn’t have a standing budget item for ASO flights but has been spending about $500,000 a year for the past few years to get more regular ASO data, said Chris Orrock, a spokesman for DWR.

And the Bureau of Reclamation recently pledged $2.5 million for expanded ASO flights.

“It definitely helps you know what the system is capable of producing,” said Michael Jackson, Area Manager for the South-Central California office of the Bureau of Reclamation, which runs the Central Valley Project that relies on water from the San Joaquin River watershed.

“Any data you can get on snowpack is crucial, particularly this year.”