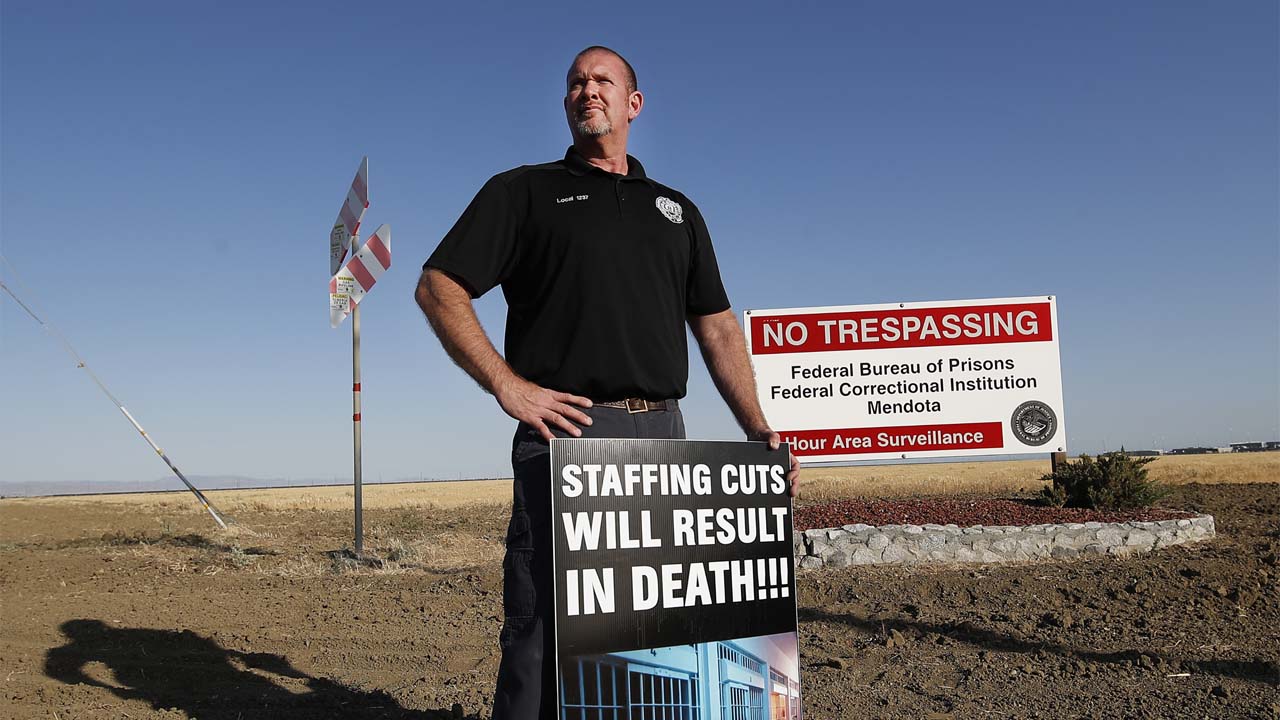 Nearly one-third of federal correctional officer jobs in the United States are vacant, forcing prisons to use cooks, teachers, nurses and other workers to guard inmates.

Union officials have raised the alarm about staffing problems, even holding a rally this week outside a medium-security prison in Mendota.

But federal efforts to attract more workers with 25% recruitment bonuses have, so far, barely made a dent. Starting salary is just under $43,500, with some promises of making up to $62,615. But that’s much less than what even some other federal agencies are offering, not to mention competition from police departments, state prisons, oil refineries, factories, and warehouses. 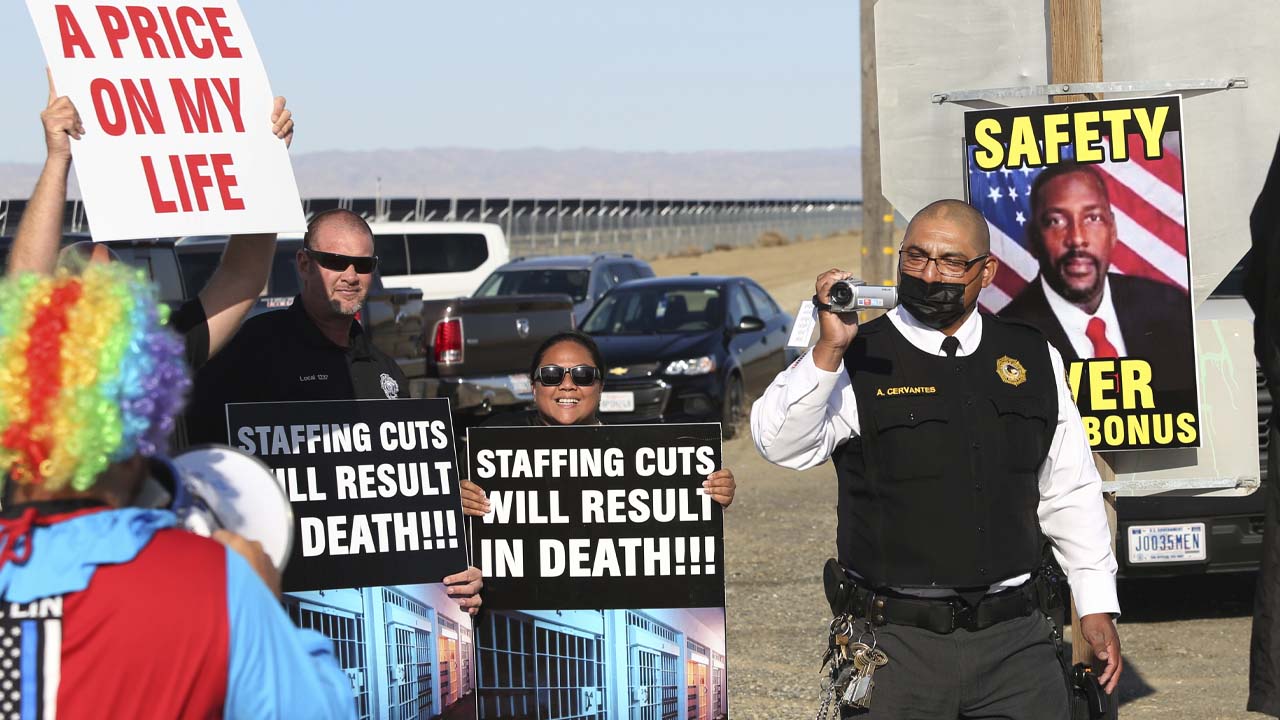 Union officials estimate that officer staffing at the Mendota prison is at least 30% below the level needed to safely manage inmates. Their positions are being filled by nurses and cooks, the union says.

The bureau says it hired nearly 4,000 new staff members in 2020 — more than in prior years — and that more than 500 additional hires are on the way. The agency said it is offering retention incentives for hard-to-fill positions and to keep around employees who are eligible to retire, and holding recruiting events regularly.

The situation could become even more dire as federal prisons brace for an influx of inmates. Right now there are 152,376 prisoners in 122 facilities.

The Bureau of Prisons is ending contracts with private lockups — the Mendota prison was set to receive 400 inmates from a for-profit facility in Texas — and is likely to seek the return of nearly 5,000 people who were released on home confinement during the pandemic.

At a federal penitentiary in Texas, prisoners are locked in their cells on weekends because there are not enough guards to watch them. Elsewhere in the system, fights are breaking out, several inmates have escaped in recent months and, in Illinois, at one of the most understaffed prisons in the country, five inmates have died in homicides or suicides since March 2020.

The Justice Department budgeted for 20,446 full-time correctional officer positions in 2020, but the agency that runs federal prisons said it currently employs 13,762 officers. The Bureau of Prisons insists that many of its facilities still have a full complement of officers who focus solely on maintaining order.

Decisions to use other staff as guards are based on a facility’s needs and are made to ensure critical positions are covered, the agency said. Staff members also may be pressed into duty as correctional officers “during irregular periods such as a pandemic,” the agency told The Associated Press.

For years, the Bureau of Prisons has been plagued by systematic failures, from chronic violence to high-profile deaths. But the staffing crisis is reaching a breaking point, and the pandemic hasn’t helped. Nearly 7,000 employees were sickened with COVID-19. Officers were sent to hospitals to guard inmates being treated for the virus. Four staff members and 235 inmates died.

At a prison in Illinois, there are so few staff that officers are sometimes forced to work 60 hours of overtime in a week. At a facility in California, a fight broke out among inmates soon after a teacher was sent to fill in as an officer.

Overworked employees are burning out quickly and violent encounters are being reported on a near-daily basis. At a prison in Illinois, there are so few staff that officers are sometimes forced to work 60 hours of overtime in a week. At a facility in California, a fight broke out among inmates soon after a teacher was sent to fill in as an officer.

The expanded use of that practice, known as augmentation, is raising questions about whether the agency can carry out its required duties to ensure the safety of prisoners and staff members while also putting in place programs and classes such as those under the First Step Act, a criminal justice overhaul that received wide bipartisan support in Congress.

“You can’t do programming, you can’t have safety, you can’t have a lot of things that make prisons operate without proper staffing,” said Kevin Ring, the president of the advocacy group Families Against Mandatory Minimums.

New Hires Told They Should Expect to Pinch-Hit as Guards

The bureau insists everyone working at its facilities is a trained, sworn correctional worker, regardless of position or job title. All 35,000 employees are told when they are hired that they should expect to perform law enforcement functions, the agency said, even if they are signing on as counselors or teachers.

But pulling employees away from other duties up to twice a week means they have less time to do their regular jobs such as teaching classes, reviewing release paperwork, and providing vital inmate services.

The issue came up when wealth financier Jeffrey Epstein took his own life while in one of the most secure jails in the country, the Metropolitan Correctional Center in New York. One of the two prison workers assigned to guard Epstein the night he killed himself was a warehouse worker who was augmented to work as a correctional officer. Both were working overtime because of staffing shortages.

At the high-security penitentiary in Thomson, Illinois, where several inmates have been killed or killed themselves in recent months, about 20 nonofficer workers are augmented each day, and officers are forced to work overtime in 16-hour days that sometimes add up to 60 hours or more of overtime per week.

Last week, the agency suddenly recalled correctional officers who had been temporarily reassigned to help out at some of the system’s most understaffed facilities. Bureau officials said those employees were sent to “locations experiencing staff shortages, for training purposes, and to provide additional security as needed” and the jobs were never meant to be permanent.

People familiar with the matter said the decision to recall the staffers was driven by cost-cutting and came after a blistering internal financial review. The people were not authorized to discuss the matter publicly and spoke on condition of anonymity.

The Bureau of Prisons would not say how much money was spent on augmentation in the past few years. Records reviewed by the AP show skyrocketing costs from both augmentation and overtime. At the federal prison in Beaumont Texas, officials spent $8.1 million on overtime last year. The overall agency annual budget is close to $7.8 billion.

The bureau said it must rely on overtime and reassigning other staff members “when an insufficient number of correctional officers are available to cover an institution’s critical custody posts.”

“This is not a new practice,” the agency said in a statement. “It is important to note that staff assigned to our institutions are professional law enforcement officers first, regardless of their occupation. All staff are trained accordingly and are expected to perform law enforcement functions during routine and non-routine situations.”

But correctional officers say there’s a difference between patrolling the same cell blocks each day — keeping skills and senses up — and moonlighting there periodically.

The staffing situation in Beaumont is so severe that prison officials have turned to just locking inmates in their cells on weekends because officials do not have enough officers to guard the prisoners. Visiting the prison has been suspended until further notice.