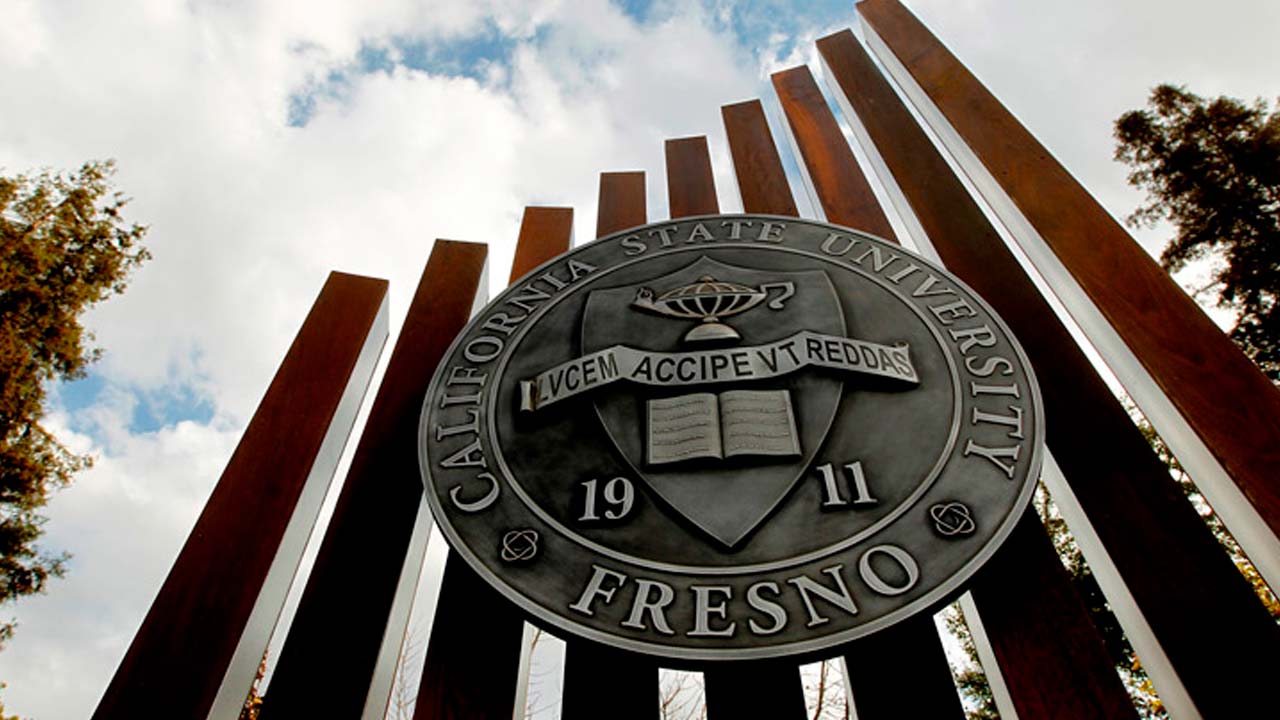 The eight schools and colleges at Fresno State, along with the Division of Student Affairs and Enrollment Management, each selected an outstanding student to honor as part of the class of 2021 Undergraduate Deans’ Medalists.

The deans selected an undergraduate and graduate medalist based on academic excellence, community involvement and other achievements. In mid-May, one medalist from the group below will be announced as the President’s Medalist, the university’s top academic honor for an undergraduate student.

This year’s undergraduate medalists are: 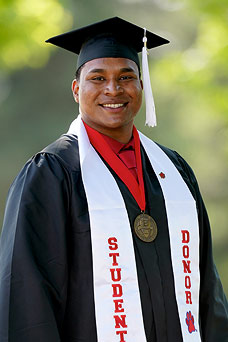 Caleb Charles, College of Arts and Humanities: Charles, of Kingsburg, earned his B.A. in philosophy, pre-law option, and a certificate in social justice and social change with a 4.0 GPA. He was introduced to philosophy while studying at Whittier College where he played football on scholarship. Charles suffered a career-ending injury during his first season and returned home to heal.

Driven by his immigrant father’s belief in education and his love of philosophy, Charles attended Fresno City College and earned a certificate from the Central Valley Regional Pathway to Law Pipeline, which provides underrepresented students a pathway to Fresno State and then to a partnering law school. After the death of George Floyd, Charles organized a march in Selma where he delivered a speech and led a demonstration, kneeling for eight minutes and 46 seconds in solidarity. Charles plans to attend law school at the University of California, Berkeley, and become a civil rights attorney for the NAACP. 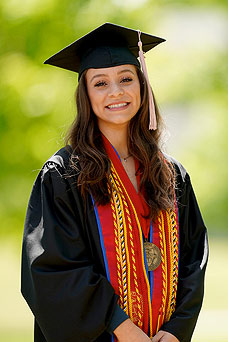 Desiree Galvan, College of Health and Human Services: Galvan, of Bakersfield, completed her B.A. in communicative sciences and deaf studies, speech-language pathology option, with a 4.0 GPA. She is a first-generation American who wants to use her English, Spanish, and American Sign Language skills to communicate with others. She has a desire to help others overcome challenges, having faced her own struggles with depression and anxiety.

She has a passion for helping children, which led her to volunteer and work at a counseling center where she developed group therapy sessions for children. Galvan served as vice president for Fresno State’s Student Speech-Language-Hearing Association and participated in the TRIO Student Support Services Program, which provides academic support for first-generation, low-income students, and those with disabilities. Galvan’s future goals are to earn a master’s degree in speech-language pathology, a doctorate in counseling, and to teach at Fresno State. 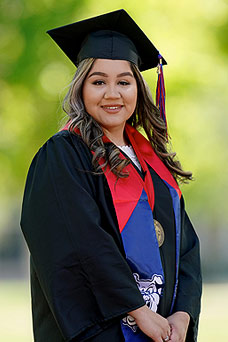 Nuvia Garcia, College of Social Sciences: Garcia, of Turlock, completed her B.S. in criminology, forensic behavioral science option, and a minor in Spanish with a 3.97 GPA. She is a first-generation college student who became interested in criminology after a friend got involved with drugs, criminal activity, and then took his own life.

Her own struggles almost got the best of her, too. Garcia spent many hours in the lab as a research assistant and lab manager. She was also able to conduct her own research as part of the McNair Post-Baccalaureate Achievement Program and the College of Social Science Honors Program, examining the effect that pre-admonition commentary — statements given to the witness before a lineup — has on mock jurors. Garcia wants to earn a master’s degree in clinical counseling and a license as a professional clinical counselor, then a doctorate in clinical psychology. 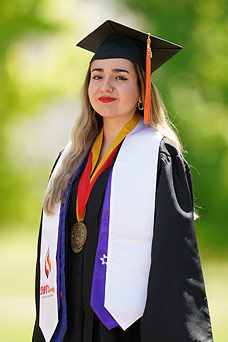 Alejandra Leija, Lyles College of Engineering: Leija, of Parlier, completed her B.S. in mechanical engineering with a 3.87 GPA in four years, a feat accomplished by fewer than 15% of students in the Lyles College. Leija, a first-generation college student, grew up in a community where the National FFA Organization was the main school program, but she was passionate about math and science and sought opportunities that could expose her to engineering.

She received the Lyles Family Honors Scholarship, which covered her four-year academic journey. She also received the Northrop Grumman Scholar SHPE based on her academic achievements and involvement with the Society of Hispanic Professional Engineers. In January, Leija was recognized by the Society of Women Engineers with the WELocal SWE Guiding Star Award. She participated in research on biomedical devices, and completed internships with Lawrence Engineering Group and General Electric Aviation. Leija’s future plans include applying to a graduate program. 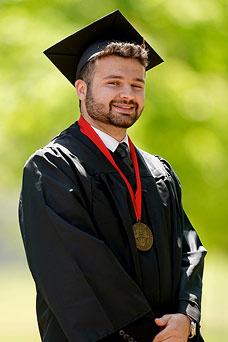 Narek Khatchikian, Craig School of Business: Khatchikian, of Fresno, completed his B.S. in business administration, finance, and a minor in economics with a 3.97 GPA. He was involved in several campus organizations but nothing may have been more rewarding than his time developing activity programs, recruiting counselors, and managing club finances for Camp Kesem, a weeklong summer camp for children affected by a parent’s cancer.

Khatchikian spent much of his time at Fresno State serving in leadership positions for the Craig School. He was president of the Student Managed Investment Fund, which managed $5.7 million in endowment funds. He was also president of the Association of Finance Scholars and an ASI senator for the college. Khatchikian plans to pursue an MBA and earn his designation as a Chartered Financial Analyst. He aspires to become a portfolio manager and start a fund that distributes its profits to social needs and issues. 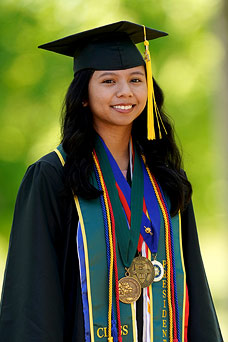 Alyssa Rivera, College of Science and Mathematics: Rivera, of Fresno, completed her B.S. in biochemistry with a 3.96 GPA. Rivera and her family moved to the United States from the Philippines when her mother answered a call for more nurses. Soon after the family arrived, her mother was diagnosed with leukemia. Rivera spent her childhood in hospitals learning about insulin, chemotherapy, and bone marrow transplants. In high school, she learned about the disparities in health care, which combined with her mother’s illness sparked an interest in science.

She is a Smittcamp Family Honors Scholar, a recipient of the William and Susan Furze Scholarship, and a winner of the highly regarded national Goldwater Scholarship. Rivera has participated in anti-cancer treatment research at Fresno State since the summer before her freshman year. She also worked as an emergency medicine scribe at Community Regional Medical Center. Rivera plans to attend medical school and return to the Central Valley. 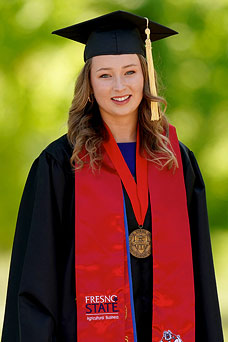 Amanda Skidmore, Jordan College of Agricultural Sciences and Technology: Skidmore, of Atwater, is a double major who completed her B.S. in business administration, marketing emphasis, and her B.S. in agricultural business with a 3.9 GPA. Skidmore spent the last four years building relationships through internships. She interned at the California Cotton Ginners and Growers as a freshman, then went on to Zenith Insurance Company. She was a marketing intern at Ruiz Foods, where she developed a passion for branding. Skidmore also interned with the Agricultural Retailers Association in Washington, D.C.

At Fresno State, Skidmore reinstated and served as president of the university’s chapter of the National Agri-Marketing Association. She also founded the Fresno State FFA Officer training program. Skidmore has participated in research and served as a volunteer in the community. she landed a job in brand marketing with E. & J. Gallo Winery after graduation. She would like to return to Fresno State for her agricultural executive MBA. 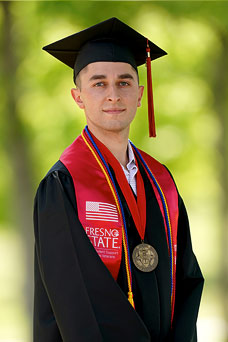 James Roger Tovar III, Division of Student Affairs and Enrollment Management: Tovar, of Dos Palos, completed his B.S. in criminology, law enforcement and a minor in aerospace studies, with a 4.0 GPA. Tovar, who has dreamed of becoming an Air Force pilot, enlisted in the military for six years of active duty after high school. He was deployed three times between 2013 and 2016. His experience in the military motivated him to become the first in his family to earn a college degree and work toward his goal of being a commissioned officer.

He attended Merced College, then transferred to Fresno State where he joined the Air Force Reserve Officer Training Corps and served as cadet commander this year. At the university, he worked at TRIO Student Support Services — Veterans as a veteran community builder helping students like himself transition from active duty service to being a civilian college student. Tovar has earned a position as a pilot trainee in the U.S. Air Force. 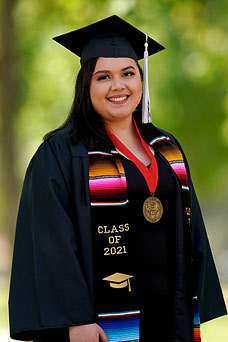 Lizbeth Cortez Villa, Kremen School of Education and Human Development: Villa, of Dos Palos, completed a B.A. in liberal studies with a 3.94 GPA. Villa is the oldest member and first generation of her family pursuing higher education. She spent summer and winter breaks working in the fields to pay for college and later received several scholarships, thanks to her high GPA and volunteer experience.

Villa served as a Scholar in Service for the Jan and Bud Richter Center for Community Engagement and Service-Learning where she interned at Wesley United Methodist Church and helped with food giveaways, health checks, and other events. She was offered a job as a Sunday School teacher. Villa also served as club treasurer for the student-run Bulldog Pantry helping to change the lives of people in the community. She is applying to Fresno State’s Multiple Subject Credential Program to become a bilingual teacher in the Central Valley. Future goals include earning a master’s degree in counseling.

Councilmen Big on Ideas, Short on Details for Eviction Defense