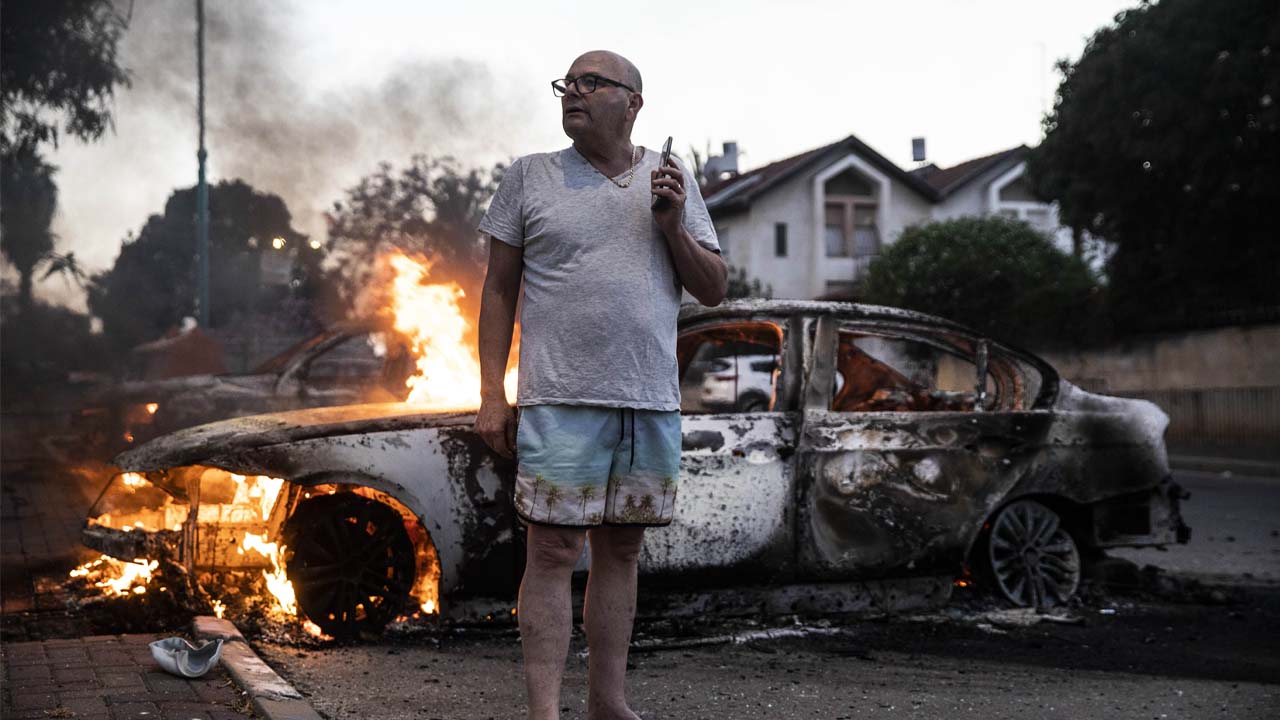 JERUSALEM — As rockets from Gaza streaked overhead, Arabs and Jews fought each other on the streets below and rioters torched vehicles, a restaurant and a synagogue in one of the worst spasms of communal violence Israel has seen in years.

The mayor of the mixed town of Lod, which saw the worst of the violence Tuesday, compared it to a civil war or a Palestinian uprising. Arab experts and activists say the violence was fueled by unrest in Jerusalem that has brought Israel to the brink of another Gaza war, but is rooted in deeper grievances that go back to the founding of the state.

Violence flared again Wednesday night with a wave of apparent revenge attacks. In Bat Yam, a Tel Aviv suburb, a large crowd of ultranationalist Israelis pulled a man from a car who they thought was Arab and beat him until he lay on the ground motionless and bloodied. A hospital said he’s in serious condition without identifying him.

Earlier, a group of black-clad Israelis smashed the windows of an Arab-owned ice cream shop in Bat Yam and ultranationalists could be seen chanting, “Death to Arabs!” on live television during a standoff with Border Police. In the northern city of Tiberias, video uploaded to social media appeared to show flag-waving Israelis attacking a car.

Israel’s Channel 13 quoted a senior police officer as saying Arabs are suspected of attacking and seriously wounding a Jewish man in the coastal city of Acre amid new clashes there.

In a late night television interview, Israeli President Reuven Rivlin, whose figurehead office is meant to serve as the nation’s moral compass, said the country was gripped by civil war and urged citizens to “stop this madness.”

Israeli Prime Minister Benjamin Netanyahu called on both Jews and Arabs to cease attacks on each other: “It doesn’t matter to me that your blood is boiling. You can’t take the law in your hands,” he said.

Police said they arrested nearly 400 people allegedly “involved in riots and disturbances” across the country Wednesday.

The violence comes at a time when Israel’s Arab minority appeared to be gaining new acceptance and influence. Mansour Abbas, the head of an Arab party with Islamist roots, emerged as a kingmaker of sorts after March elections and was poised to play a key role in a coalition that would oust Prime Minister Benjamin Netanyahu and his right-wing allies.

But in an interview with The Associated Press on Wednesday, Abbas indicated that coalition talks would be put on hold because of the escalating violence. “If there is a cease-fire, we will return to the political track to form a government,” he said.

Weeks of Clashing and Protests Across the Country

In recent days, Arab citizens of Israel have held mass protests across the country over Israel’s policing of a flashpoint holy site in Jerusalem and plans to evict dozens of Palestinian families in the city following a legal campaign by Jewish settlers.

Adding to the tensions are increasingly powerful far-right groups in Israel that won seats in March elections and are allied with Netanyahu. In recent days, far-right politicians have visited the tense east Jerusalem neighborhood where the families are threatened with eviction and staged marches elsewhere in the bitterly contested city.

After police broke up a protest Monday night in Lod, a young Arab resident was shot and killed. Police spokesman Micky Rosenfeld said the man was with a group of rioters threatening Jewish homes, and that Jewish residents opened fire in a “life-threatening situation.” He said three people have been detained for questioning and police are investigating. Arab residents of Lod disputed the account, pointing out that the slain man was unarmed.

His funeral the next day drew thousands of people and a heavy police presence. Clashes broke out between the two sides, leading to riots in which several vehicles and a synagogue were set ablaze. A 56-year-old Jewish man was severely wounded after Arabs pelted his car with rocks, according to the Magen David Adom emergency service.

Rosenfeld said there were several different instances of Arabs attacking Jews, and that 12 police officers were wounded. He said 270 suspects were arrested at 40 locations across the country where vehicles were set on fire and public property was damaged.

“The Arabs don’t want us here, but we’re going to stay,” said Avraham Sagron, a Jewish resident of Lod, as he surveyed the charred entrance of the synagogue, the interior of which appeared largely untouched.

Netanyahu and Authorities Try to Restore Order in Lod

Netanyahu visited Lod and Acre, where he pledged to “stop the anarchy” and restore order “with an iron fist if needed.” He called on Arab and other community leaders to condemn the violence and act to stop it.

Authorities deployed hundreds of police reinforcements to Lod and other areas, including paramilitary border police who usually operate in the occupied West Bank. They also ordered a nighttime curfew in Lod.

Arabs say the violence of the past two days was not directed at Jews, but at religious nationalists with close ties to the settlement movement who have moved into mixed areas in recent years, pushing Arab residents out.

Israel’s Arab minority makes up about 20% of the population and are the descendants of Palestinians who stayed in the country after the 1948 war surrounding Israel’s creation, when an estimated 700,000 fled or were driven from their homes in towns like Lod. They have citizenship, including the right to vote, but face widespread discrimination.

Arab citizens speak Hebrew and are well-represented in Israel’s medical profession and universities, but they largely identify with the Palestinian cause, leading many Israelis to view them with suspicion. Lod’s Arabs, who make up about a third of the city’s population, are among the poorest communities in Israel.

“We’re talking about young people who have no horizon, no dreams, who are unemployed and live in a very difficult reality,” said Dr. Nasreen Haddad Haj-Yahya, the director of the Arab-Jewish relations program at the Israel Democracy Institute, an independent think tank.

She said the anger of the last two days was not directed at Lod’s longtime Jewish community but at more ideological recent arrivals.

“It’s not because of who they are. It’s because they are trying to Judaize Lod. They are trying to drive out the indigenous Arab residents,” she said. “The young people see it as a threat to their presence in the land, to their existence.”

Thabet Abu Rass, the co-director of the Abraham Initiatives, which promotes Jewish-Arab coexistence, said the six Arab members of Lod’s municipal council have been sidelined and the city’s budget heavily favors Jews. He accused Mayor Yair Revivo of inciting against Arabs.

Revivo, a member of Netanyahu’s right-wing Likud party, has courted controversy by complaining about the volume of the Muslim call to prayer in Lod and for remarks that appeared to cast its Arab residents as a national security threat.

“He should be a mayor for everybody,” said Abu Rass, who lives near Lod and has an office there. “He’s not giving equal services for all residents.”

The mayor’s spokesman said he was not available for comment. Earlier, Revivo had urged Arab residents to end the violence, saying: “The day after, we will still have to live here together.”

Israeli officials often hold up the Arab minority as proof of their commitment to tolerance, frequently pointing out that Arab citizens enjoy civic rights and freedoms that many Arab states deny their own people.

Ghassan Munayyer, a Lod-based activist, says the veneer of coexistence conceals deeper disparities, including in housing and infrastructure, comparing its Arab neighborhoods to “refugee camps.”

“The Jews love saying there’s coexistence. They go out to eat in an Arab restaurant and they call it coexistence,” he said. “But they don’t see Arabs as equal human beings who have rights that they have to respect.”

Will Firefighters Be Fired for Kobe Bryant Crash Photos?