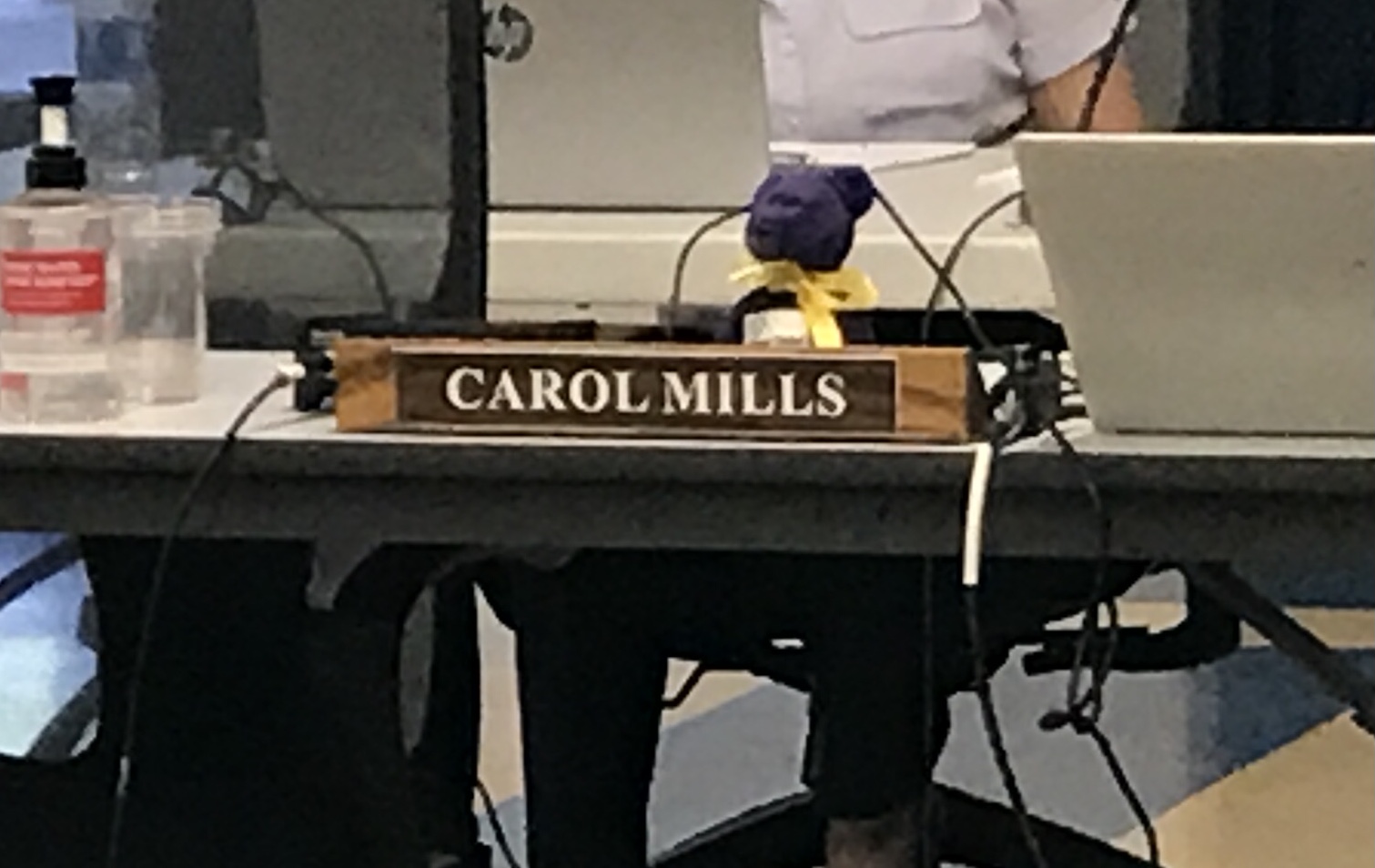 Fresno Unified Trustee Carol Mills broke her public silence about a disability that has severely affected her speech and has kept her from attending School Board meetings in person so far this year in rebuking a critic she said belittled her and others with disabilities.

Mills, who represents the Fresno High area and is one of the School Board’s longest-serving members, used a computer-generated voice to speak at Wednesday’s School Board meeting about the comments made about her as-yet unrevealed disability.

“People with disabilities are capable of serving in public office and making contributions to society.” — Trustee Carol Mills

“One only has to look at Franklin Roosevelt, who was crippled by polio and served as president of the United States, or to Tammy Duckworth, who lost both legs while serving in the military and is now a United States senator, or Stephen Hawking, who was afflicted with ALS after which he made multiple scientific breakthroughs. … People with disabilities are capable of serving in public office and making contributions to society.”

Neither Mills nor any of the other School Board members publicly named the community member accused of making the disparaging comments.

However, Fresno resident Andrew Fabela was the only person who spoke about Mills and her apparent health issues at the April 21 board meeting.

Fabela, whose nomination by Trustee Terry Slatic for the district’s bond oversight committee was twice rejected by the trustees, questioned Mills’ absence from the dais and said he and other Fresno High area constituents are left with unanswered questions, including her capability to serve on the School Board.

“Is she able to represent us adequately? I think that’s something that we all need to know, and that we have a right to know,” he said at the speaker’s podium.

Trustees Speak Out in Support

At the conclusion of Mills’ remarks on Wednesday, four of the trustees — Claudia Cazares, Veva Islas, Elizabeth Jonasson Rosas, and board president Valerie Davis —expressed their support for Mills, noting her long public service to the district, and denounced anyone who disparages people with disabilities.

After acknowledging she and Mills have differed on some issues, Islas said she has deep respect for Mills for her long service and also because she is always “super-prepared and super-knowledgeable about what she is speaking to.”

“I find it really egregious that any type of disparaging remark would be targeted against her,” Islas said. “We are elected officials, we do have a responsibility, we are accountable to the community, but we’re also human beings.”

Jonasson Rosas pointed out that trustees serve at the will of their constituents. But “to disparage anyone for any health reason whatsoever is just … I have trouble expressing because, frankly, our community is diverse, our community is inclusive, (and) we try to be inclusive.”

Davis, who has served with Mills on the School Board since 2004, offered a public apology to her “for the speaker’s comments, and I would ask the community to direct your comments, and your threats, to our policies, and not to us directly.”

After the meeting, Davis told GV Wire she has no information about the nature of Mills’ disability. She said she believed the social media post that Mills referenced was on a Facebook page for Fresno High alumni.

Still on the Job

Although absent from the dais, Mills has continued to participate in School Board meetings. Reports from closed session include her making motions or seconding motions and also voting. She votes audibly during open sessions, and she has raised questions or made comments about agenda items, speaking through a computer-generated voice.

On Wednesday, for example, Mills noted during a budget presentation that she was glad to see an expansion of the district’s after-school program because students should not have to be on waiting lists — a concern she has raised for some time.

Mills has not responded in recent weeks to requests from GV Wire for interviews.

United Beefs up Fresno Schedule With Airbus Flight to Denver