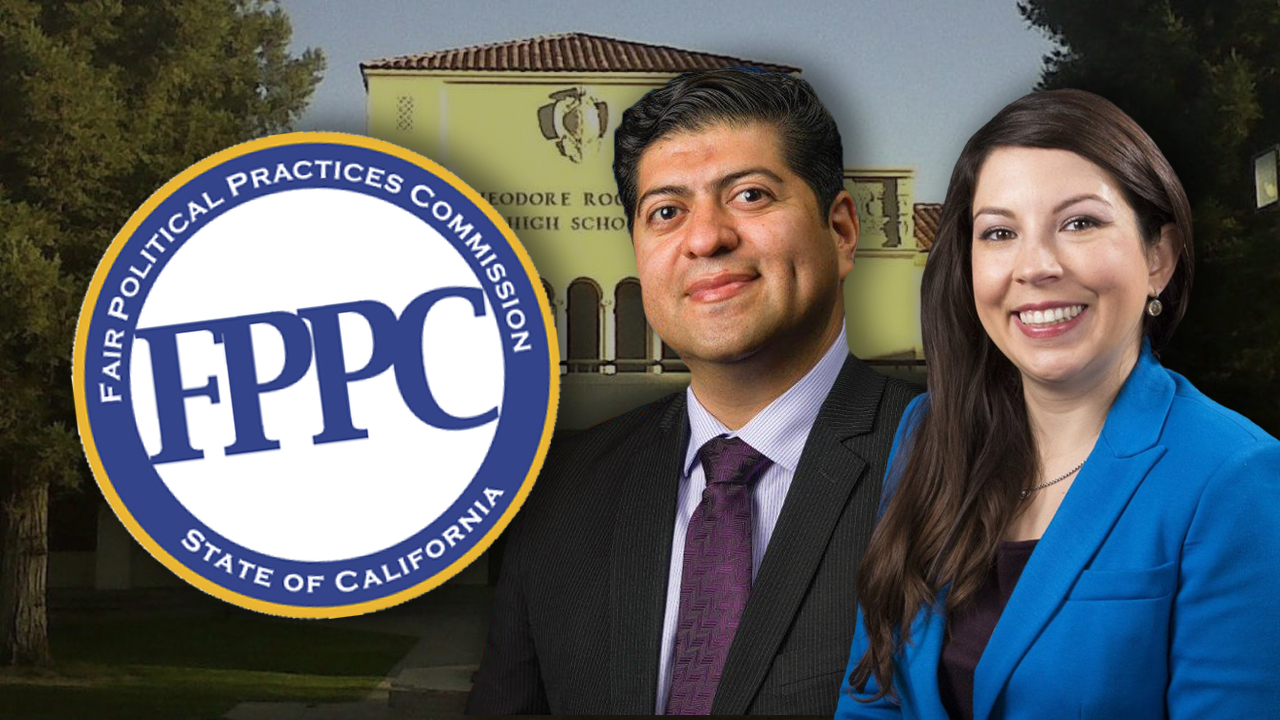 Fresno City Councilman Luis Chavez and his wife, Fresno Unified trustee Elizabeth Jonasson Rosas, are being investigated for alleged improper votes while on the school board.

An anonymous complaint on Oct. 17, 2019, to the state Fair Political Practices Commission, alleges that Chavez and Jonasson Rosas, by approving improvements for Roosevelt High School, benefited themselves because they live close to the school.

An additional complaint was filed a month later.

Advocating for Roosevelt ‘Is Part of My Job’

Chavez and Jonasson Rosas say they did nothing wrong.

“I ran on the platform of improving schools at Roosevelt and the Roosevelt region. Should a school board member not vote to support what he was elected to do? That’s a simple question,” Chavez said.

Jonasson Rosas says advocating for her area is “part of my job.”

“I do believe that we’re going to get cleared because, it does not directly affect our property value. It is indistinguishable. The improvements were to existing structures. And moreover, as an elected official, you’re supposed to advocate for your schools and your institutions,” Jonasson Rosas said.

The couple lives on Huntington Boulevard, less than 500 feet from the school.

“They each voted on agenda items/contracts directly benefitting Roosevelt High School — millions of dollars worth of improvements to that school, which positively impacted their personal residence and neighborhood. These votes were throughout their tenure on the school board,” the complaint alleges.

Chavez served on the FUSD board from 2012-2016 before winning election to the Fresno City Council. Jonasson Rosas won election for the seat in 2016 and was re-elected in 2020.

The case is listed as “opened and pending,” according to the FPPC complaint and case information portal.

“I will be getting a letter of clearance here pretty soon,” Chavez said.

Whether Chavez or Jonasson Rosas is in violation could hinge on whether their votes had a measurable financial impact on their property.

The relevant FPPC code is Section 18702.2 which determines when a voting decision may be considered “material” on a property owned by the elected official.

“The reasonably foreseeable financial effect of a governmental decision on a parcel of real property in which an official has a financial interest, other than a leasehold interest, is material whenever the governmental decision involves property located 500 feet or less from the property line of the parcel unless there is clear and convincing evidence that the decision will not have any measurable impact on the official’s property,” the code states.

FPPC spokesman Jay Wierenga declined to comment on the cases involving Chavez and Jonasson Rosas. Wierenga said similar cases (in general) may depend on how many people benefited from the votes.

“For example, maybe a zoning decision may improve a public officials home value, but if it also improves half the town’s value then it’s not necessarily different from a significant number or even majority of people. But if it just affects her/his home and three neighbors, that might be something different,” Wierenga said via email.

Several FPPC advice letters from February 2021 answer similar questions. The general advice is voting on items within 500 feet of property depends on whether there is a material financial effect.

[Update, 4/28/21: the wording in this section has been updated. FPPC spokesman Jay Wierenga was speaking in general terms and not on any specific case.]

Votes at School Board

Minutes on Fresno Unified’s website date back to 2015. There are several examples of Chavez and later Jonasson Rosas voting on items affecting Roosevelt High School.

At the June 13, 2018, meeting, Jonasson Rosas voted for improvements to the athletic fields.

Jonasson Rosas started abstaining from Roosevelt items at the April 1, 2020, meeting — after the FPPC complaint was filed.

She explained why, according to the meeting minutes.

“My residence is located within 500 feet of the baseball fields that are at the southwest edge of the property comprising the Roosevelt High School site. Despite this proximity Bid 20-27 will have no measurable financial impact on my property because it funds replacement of bleachers, drinking fountains or walkways already in place. Moreover, Bid 20-27 is indistinguishable to other properties within my Trustee area that are part of the Roosevelt High School attendance area. Not withstanding the absence of any financial impact on my property, I abstain from this vote on Bid 20-27 pursuant to Board Bylaw 9270 in the express purpose of avoiding any appearance of any conflict,” she said.

Jonasson Rosas said the FPPC complaint influenced her statements before her recusals.

“It was a consideration, just to be clear for the public,” she said.

Former Bullard High region trustee Brooke Ashjian paid a $4,000 fine to the state’s political watchdog in 2019 after he left office to settle a similar conflict of interest. That case involved Ashjian’s vote for $5.2 million in improvements at Rata High School.

According to state law, Ashjian should have abstained from the vote because he owned property within 500 feet of the special education school.

Ashjian told GV Wire that the district’s lawyers never advised that he was forbidden from voting on the contract because of his property’s proximity to the school.

He paid a total of $23,500 in fines for failure to disclose conflicts. The FPPC said it found no evidence that Ashjian “intended to conceal, deceive, or mislead the public.”