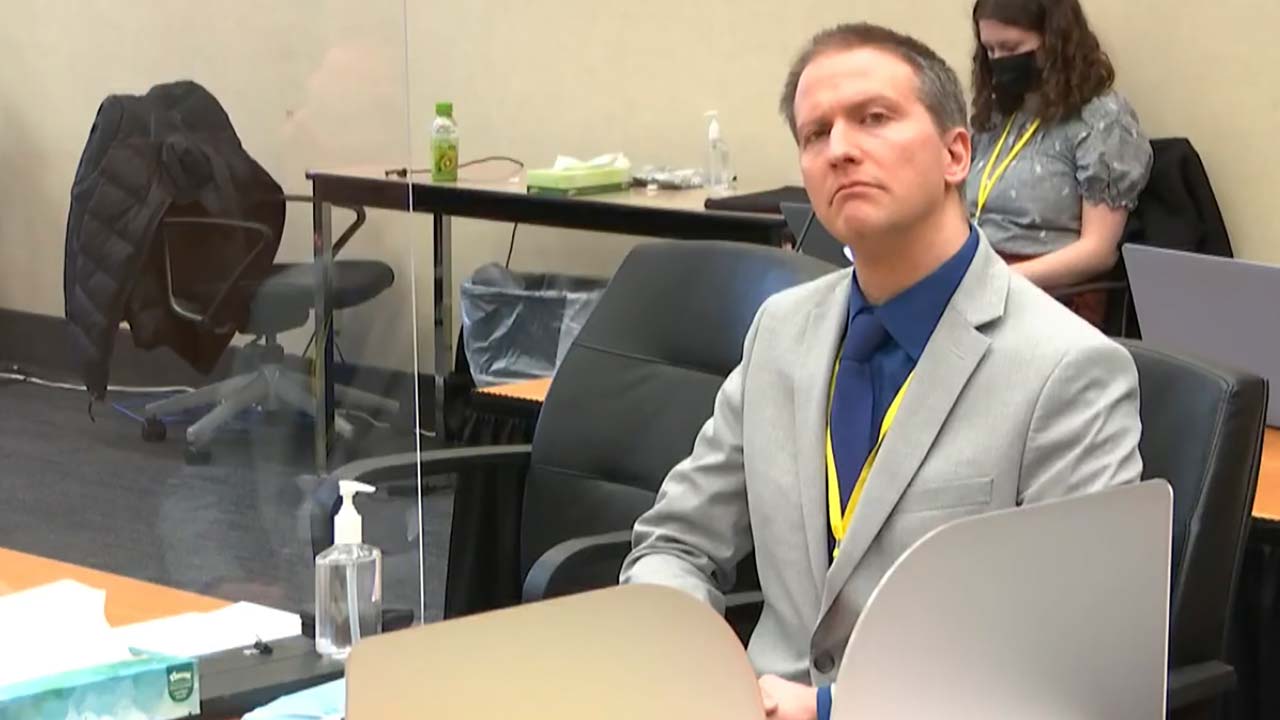 MINNEAPOLIS — The jury has reached a verdict at the murder trial of former Minneapolis police Officer Derek Chauvin in the death of George Floyd. The verdict is to be read Tuesday afternoon.

Floyd died last May after Chauvin, a white officer, pinned his knee on the 46-year-old Black man’s neck for about 9 1/2 minutes in a case that triggered worldwide protests, violence and a furious reexamination of racism and policing in the U.S.

The jury deliberated over parts of two days in a city on edge against another outbreak of unrest.

The jury at former Officer Derek Chauvin’s murder trial in George Floyd’s death deliberated for a second day Tuesday in a city skittish over the outcome as President Joe Biden weighed in by saying he believes the case is “overwhelming.”

The racially diverse jury — anonymous and sequestered from the outside world — resumed deliberations in the morning as lawmakers and fellow citizens alike delivered their own opinions about the combustible case that triggered protests, scattered violence and a reckoning over racism in the U.S.

“It shouldn’t be really even questioned whether there will be an acquittal or a verdict that doesn’t meet the scale of the crime that was committed,” Rep. Ilhan Omar, a Democrat, said in Brooklyn Center, a suburb just outside Minneapolis. The congresswoman said the Chauvin case looks open-and-shut.

Guilty verdicts could mark a turning point in the fight for racial equality, she said.

“We are holding on to one another for support. Hopefully this verdict will come soon and the community will start the process of healing,” Omar said.

In Washington, the president said that he had spoken to Floyd’s family on Monday and “can only imagine the pressure and anxiety they’re feeling.”

“They’re a good family and they’re calling for peace and tranquility no matter what that verdict is,” Biden said. “I’m praying the verdict is the right verdict. I think it’s overwhelming, in my view. I wouldn’t say that unless the jury was sequestered now.”

The president has repeatedly denounced Floyd’s death but previously stopped short of commenting on the trial itself.

Prosecutors argued that Chauvin squeezed the life out of Floyd last May when the white officer knelt on or near the 46-year-old Black man’s neck for 9 1/2 minutes. The defense contended that the now-fired white officer acted reasonably and that a heart condition and illegal drug use led to Floyd’s death.

The jury of six white people and six people who are Black or multiracial spent just a few hours on their task Monday after the day was mostly consumed by closing arguments. They will remain sequestered until verdicts are reached.

Ahead of a verdict, some stores were boarded up in Minneapolis, the courthouse was ringed with concrete barriers and razor wire, and National Guard troops were on patrol. Last spring, Floyd’s death set off protests along with vandalism and arson in Minneapolis.

The city has also been on edge in recent days over the deadly police shooting of a 20-year-old Black man, Daunte Wright, in Brooklyn Center on April 11.

Brooklyn Center Mayor Mike Elliott joined a group of residents Tuesday to call for transparency and accountability in policing.

The mayor said he has met with Wright’s family several times and vowed to “do all that’s within our power to make sure that we are implementing the kind of changes that would prevent another Daunte.”

“What this community is saying is that his life is going to continue to matter,” Elliott said.

Doris Rendell, who is Black, burst into tears as she was standing in front of a memorial set up at the site of Daunte Wright’s death. She says the Wright case and the Floyd case reminded her of her own negative interactions with police when she was young.

“It’s terrible, it’s terrible to be black, to say that… It is. There’s so much racism out here, it’s pathetic … It’s like there’s no justice in the world for us. It’s like we’re a piece of a bean in a pie just getting picked off, just no one cares.

After the jury got the Chauvin case Monday, Judge Peter Cahill rejected a defense request for a mistrial based in part on comments from California Rep. Maxine Waters, who said “we’ve got to get more confrontational” if Chauvin isn’t convicted of murder.

The judge called her comments “abhorrent” and “disrespectful to the rule of law and to the judicial branch” and told Chauvin’s attorney that Waters “may have given you something on appeal that may result in this whole trial being overturned.”

Still, two defense attorneys in Minnesota said they consider a successful appeal over remarks like Waters’ or Biden’s extremely unlikely.

“Anybody who thinks undue publicity is going to get a case reversed in this day and age is just wrong,” said Joe Friedberg, who is unconnected to the case. “Just from a pragmatic standpoint, with social media, I don’t think it can ever be done again.”

Brock Hunter, past president of the Minnesota Association of Criminal Defense Lawyers, said a successful appeal would be unlikely unless there were direct evidence that Waters’ statements affected jurors.