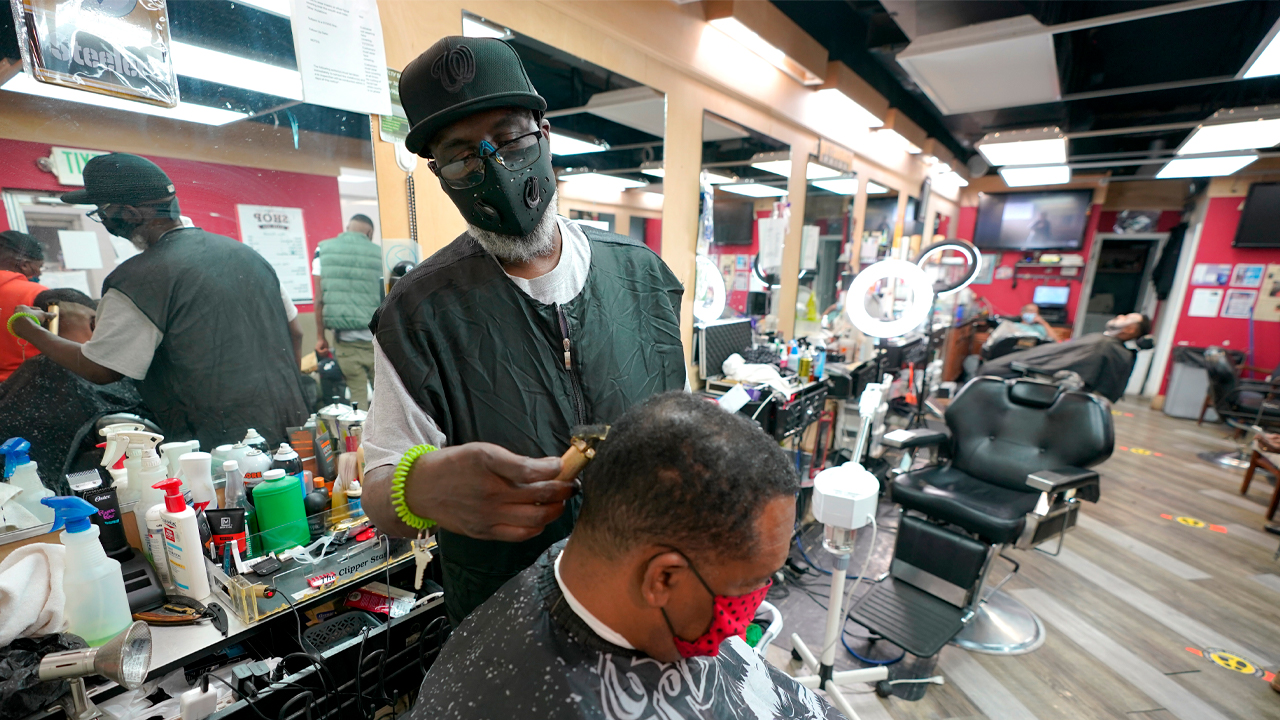 SAN DIEGO — In a Washington, D.C., suburb, Black and Latino barbers are busting myths about the coronavirus vaccine while clipping hair.

Across the country, a university researcher in Phoenix teamed up with a company behind comic books fighting Islamic extremism to produce dance-inducing animated stories in Spanish that aim to smash conspiracy theories hindering Latinos from getting inoculated.

And in San Diego, former refugees, Latinos and Black activists initially hired by health officials as contact tracers are calling back the people they reached about COVID-19 exposure to talk about the shots.

A new wave of public health advocacy that is multilingual, culturally sensitive, entertaining and personal is rapidly replacing mundane public service announcements on TV, radio and online in the battle to stamp out vaccine disinformation circulating in communities of color and get more people vaccinated.

“With the way disinformation is spreading over social media, a stale piece with information to counter that — that doesn’t work anymore,” said Mustafa Hasnain, who co-founded Creative Frontiers to make comic books fighting Islamic extremism.

The innovative messaging has grown out of urgency: The virus has hit Black and Latino people disproportionately hard, yet their vaccination rates are less than half that of white people.

The Biden administration this month launched a multimillion-dollar promotional campaign targeting communities where vaccine hesitancy is high and asked 275 organizations — from the NAACP to Ciencia Puerto Rico — to spread the word about vaccine safety and effectiveness. One ad is in Spanish and another aimed at Black Americans is narrated by the historian Henry Louis Gates Jr.

Disinformation Stemming from History of Racism and Mistrust

Rumors that the vaccines could cause infertility or the shots could inject a government tracking chip are commonly heard in the Black and Latino communities. They have a long history of facing racism in the health care system, eroding their trust.

“I see a lot of similarities in how violent radicalization takes place and the current bout of disinformation around the pandemic and vaccination,” Hasnain said. “Similar to how radicalization works, there is an echo chamber created where distrust of authority figures is inculcated.”

Adding to it is concerns about the safety of the single-dose Johnson & Johnson vaccine. The U.S. government paused the shots to investigate reports of rare but potentially dangerous blood clots.

Millions of doses of the J&J vaccine have been given in the U.S., the vast majority with no or mild side effects. But the questions stemming from six cases could complicate efforts to win over people who are already hesitant, and it was unclear how pro-vaccine advocates would respond to the latest challenge.

The latest animation is set to hip-hop rhythms and features a know-it-all Uncle Rigo who spouts unfounded claims that a cool female doctor dispels.

“The silver lining of the lessons from the pandemic is this is a chance to reimagine the delivery of health care to our communities,” said Dr. Stephen B. Thomas, who runs the Maryland Center for Health Equity at the University of Maryland School of Public Health.

He works with Black and Latino barbershops and beauty salons to talk about vaccine safety. The program recently licensed three barbers as community health advocates.

Skepticism from the Black Community

“Black barbershops and beauty salons can be places of conspiracy theories that grow and thrive, or places where evidence-based science and referrals are done,” said Thomas, who initially launched the Health Advocates In-Reach and Research initiative — or HAIR — to educate people about chronic diseases like diabetes.

At the Shop Hair Spa in Hyattsville, Maryland, outside Washington, D.C., a colorful box asking, “What is your health question?” is posted next to the prices for cuts. COVID-19 vaccine information is displayed on a red wall behind a salon chair.

“I’m still skeptical about it, you know, because of the simple fact that I’m an African American male, and when you look at history, we’ve been used as guinea pigs,” Wilson said.

He was referring to a 40-year study by the U.S. government that tracked Black men infected with syphilis without treating them so scientists could observe the disease take its course.

Customer James McRae shared his skepticism. But Wilson told McRae that this time is different because it’s not just the U.S. government vaccinating people, it’s the world, and everyone needs to do their part.

“I want everybody to be safe,” Wilson said, carefully maneuvering a razor near the straps of McRae’s red polka-dot mask.

Communication Needs to be Clear and Consistent

Experts say any trust will evaporate if people decide to get a shot and then can’t. Wilson has been on a wait list for more than a month.

With information about the virus rapidly changing, the agency resorted to an automated translator to keep up. One slogan “Mask Up, Back Up, Wash Up” was translated in Spanish to say, “To Mask, Support, To Wash Oneself.”

Leguen, who was born in Cuba, meets with Spanish-language media outlets after his weekly briefings as a way to get better information to people.

In San Diego, Ana Castro was among the ethnically and racially diverse contact tracers with no prior health training hired last summer to help immigrants, refugees and racial minorities who may have been exposed to COVID-19.

Castro knew the difficulties of the people she called. She was caring for her Mexican mother, who was bedridden with COVID-19.

Now, she and others are calling back 10,000 people to talk about the vaccine and line up appointments.

“It allows for a conversation, which is missing doing broad messaging,” said Corinne McDaniels-Davidson, director of the Institute for Public Health at San Diego State University, which created the program with the county health department. “People need to feel they have reasonable and valid concerns that are addressed in their own language from people from their same culture.”

Among Castro’s first callbacks was to a man she found had died of COVID-19. Castro and his 81-year-old wife spoke for half an hour as the woman shared memories about her husband.

“I’m not just calling to sign people up to get the vaccine,” she said. “I’m also making sure their emotional and physical well-being is being taken care of.”

Bertha Morales was hesitant even though she works for a health clinic in Phoenix. Her relatives insisted the vaccine would insert a tracking chip into her body or cause her to get sick and die.

Then her employer offered a Spanish-language online talk that knocked down those rumors. She’s now fully vaccinated.

“I think the thing that really made me change was that I wanted to see my grandma but I didn’t want to cause her to get sick,” Morales said. “It had been so long.”

Study: 2.5 Billion T. Rex Dinosaurs Roamed Earth, but Not All at Once