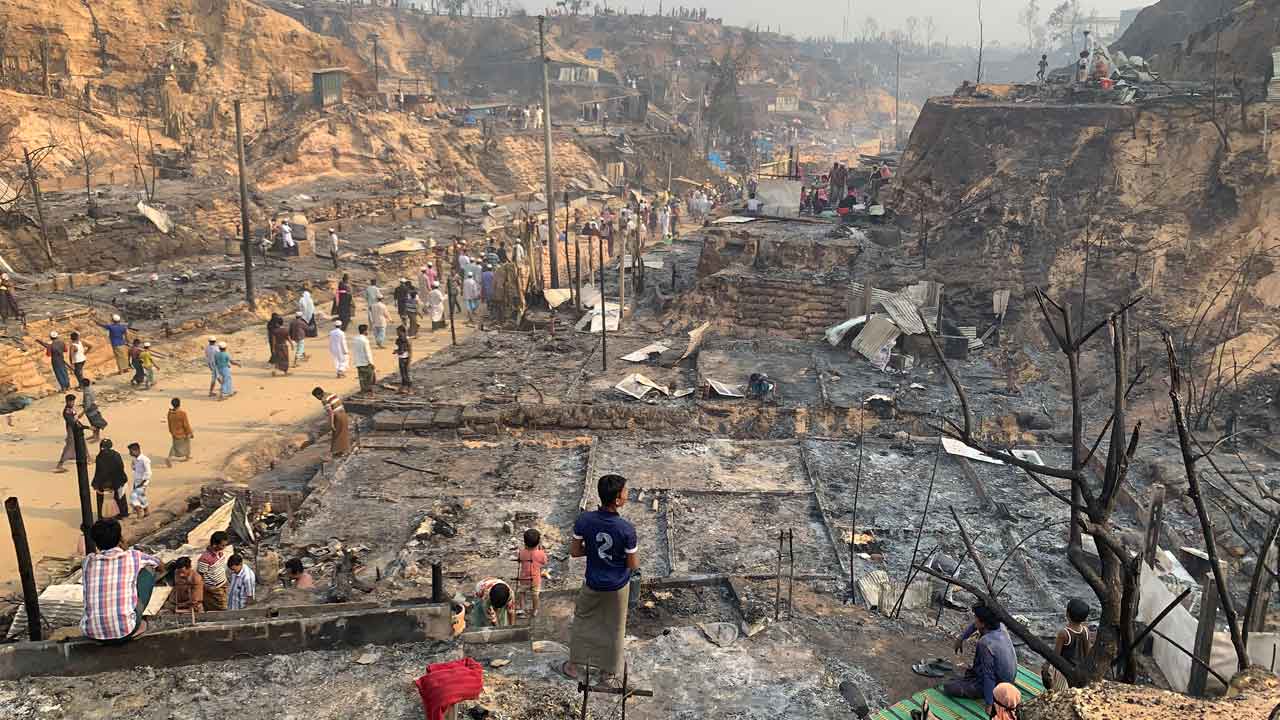 At least 400 people were still missing and around 560 were injured by the fire, according to Louise Donovan, a spokesperson for the United Nations’ refugee agency. The UNHCR said around 45,000 people were displaced by the fire, which broke out Monday afternoon and burned well into the night.

In the aftermath, refugees picked through the burned debris looking for their belongings. Others wept.

“Yesterday before the fire started, my kids went to study at the Islamic school. I did not see them after they came back. I found two of my older kids but I still can’t find my youngest son,” said Shappuni, a Rohingya refugee who uses only one name.

At least three of the dead were children and the search for victims was still ongoing, said Nizam Uddin Ahmed, the top government official in Ukhiya, a sub-region of the Cox’s Bazar district where the camp is located.

Relief teams on the ground were stunned by the unprecedented level of destruction, said Jan Egeland, secretary general of the Norwegian Refugee Council.

“This tragic event could have been less disastrous had barbed wire fencing not been erected encircling the camps. NRC staff have heard horrific accounts from refugees about their scramble to cut through the wire fences to save their families, escape the fire and reach safety,” Egeland said. 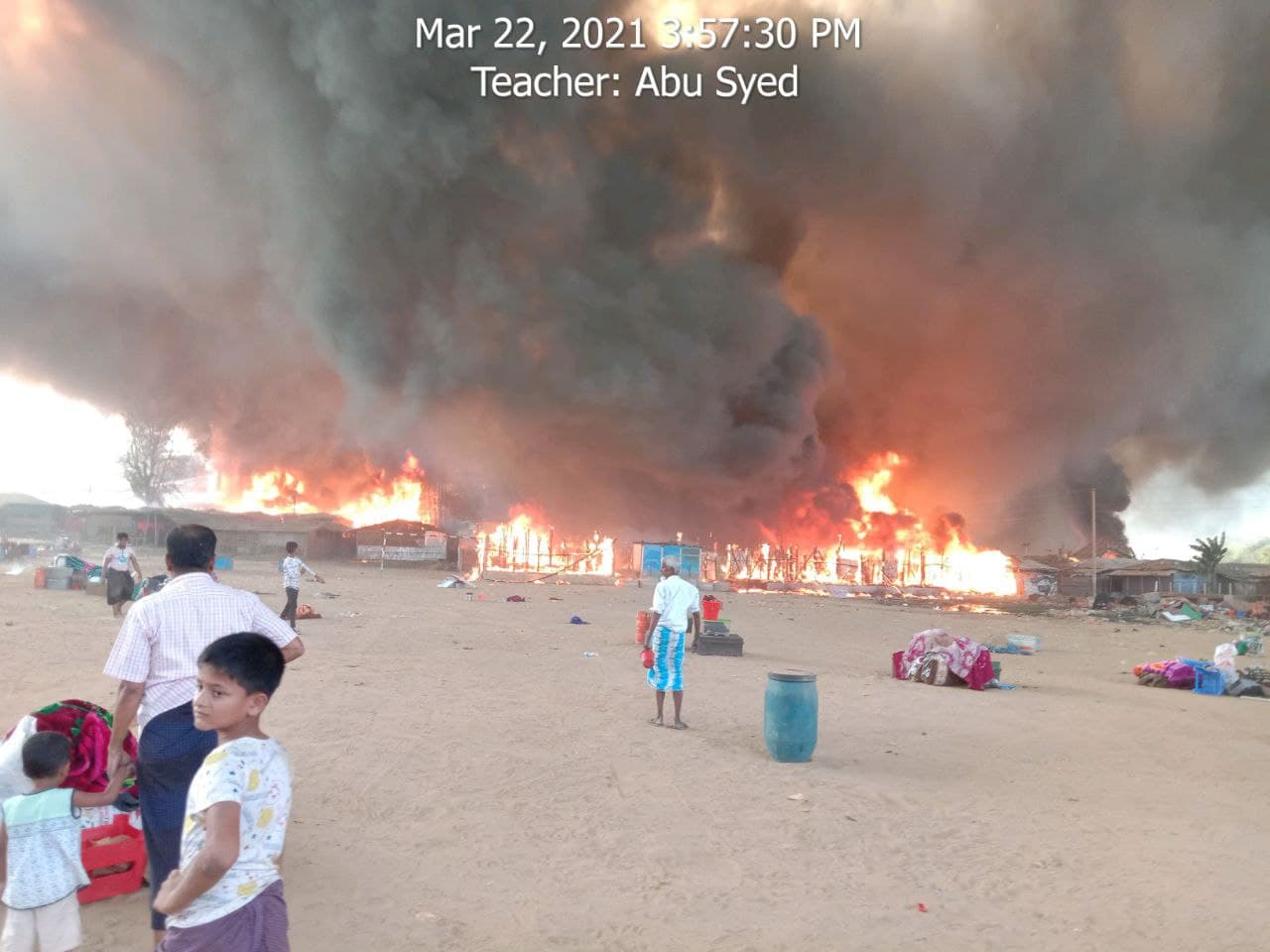 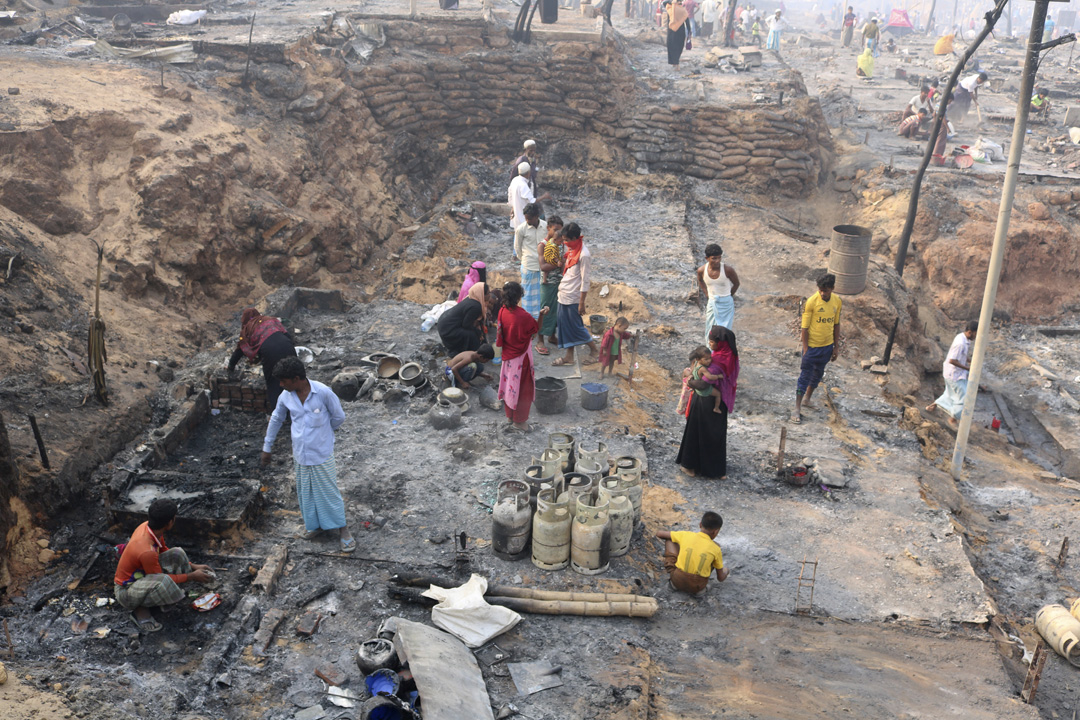 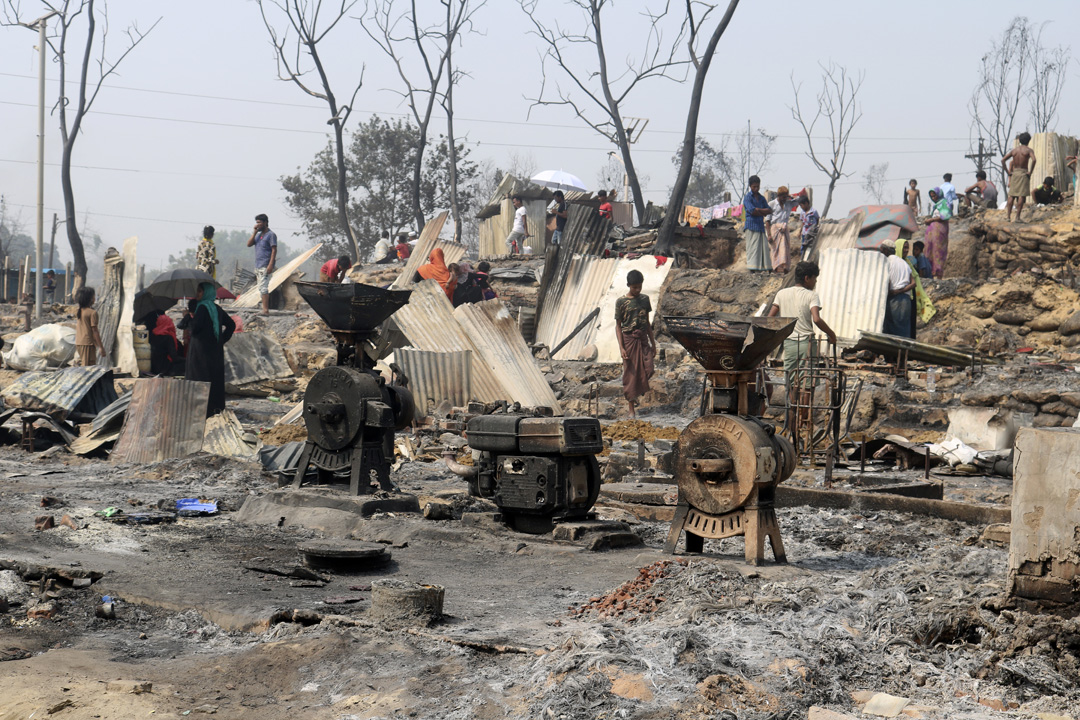 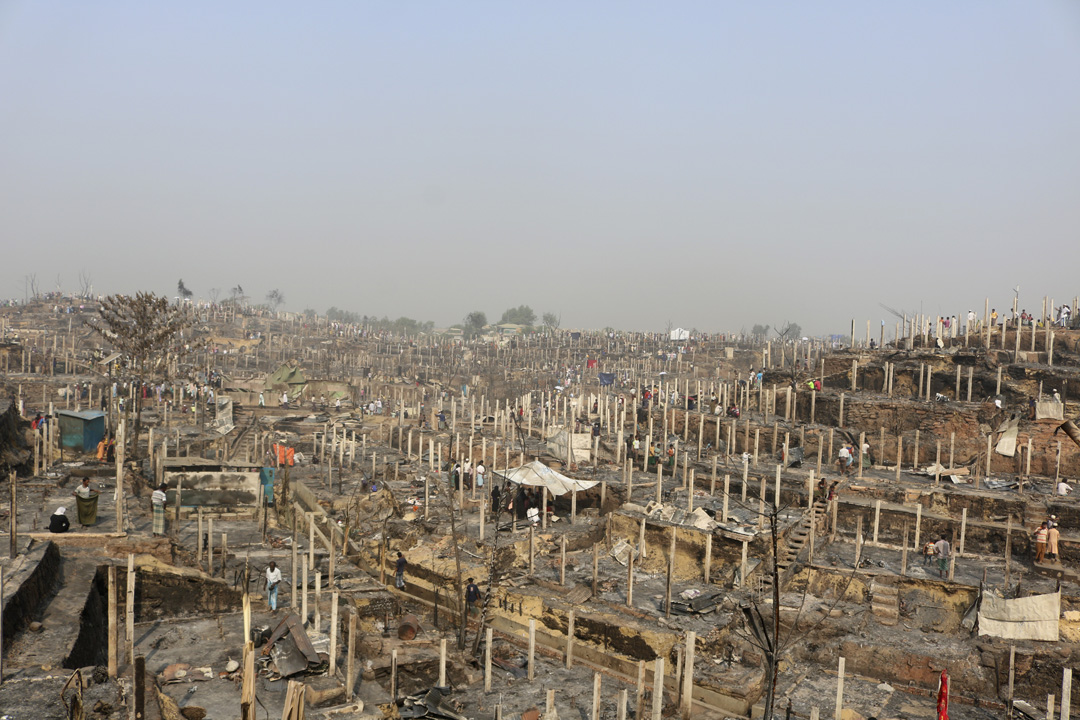 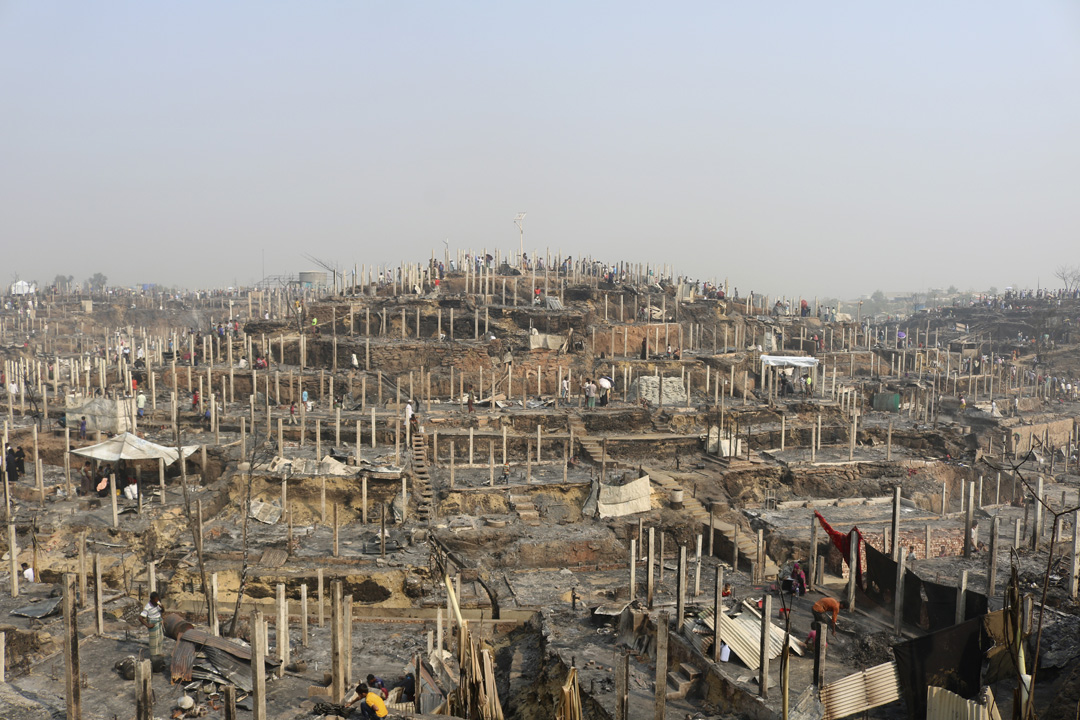 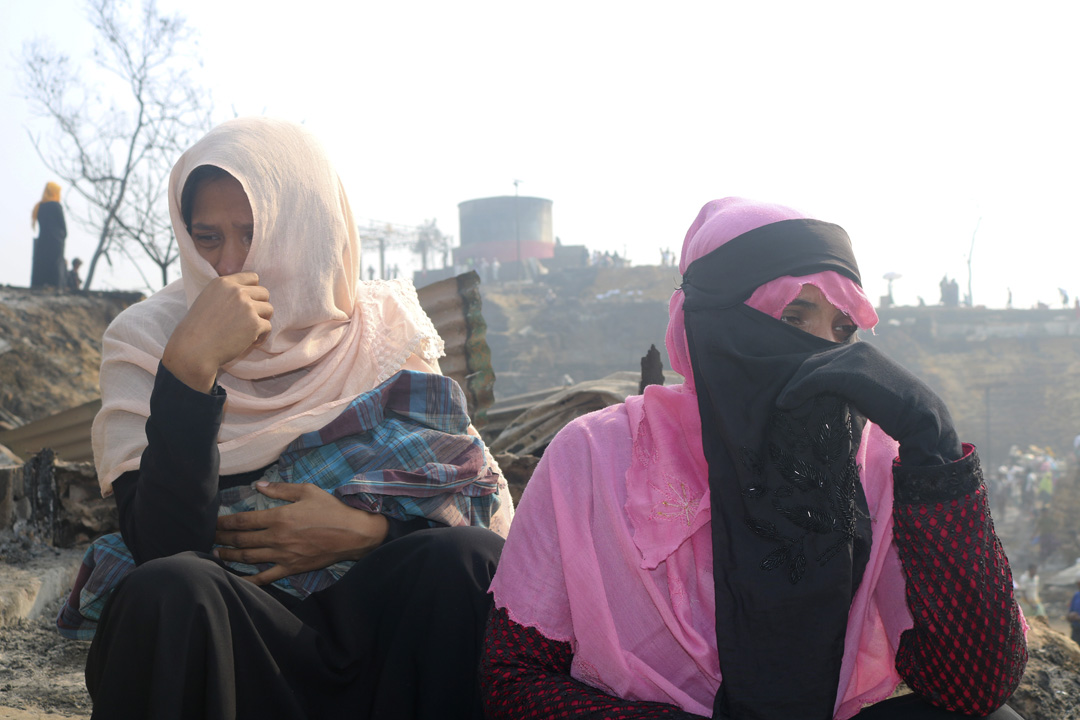 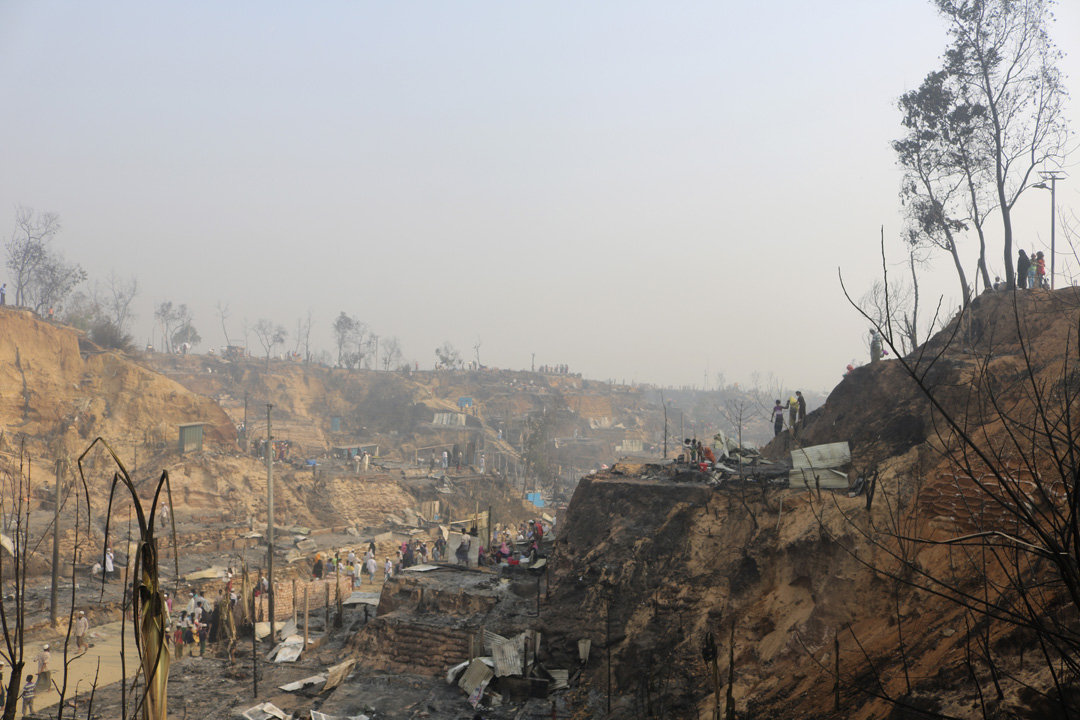 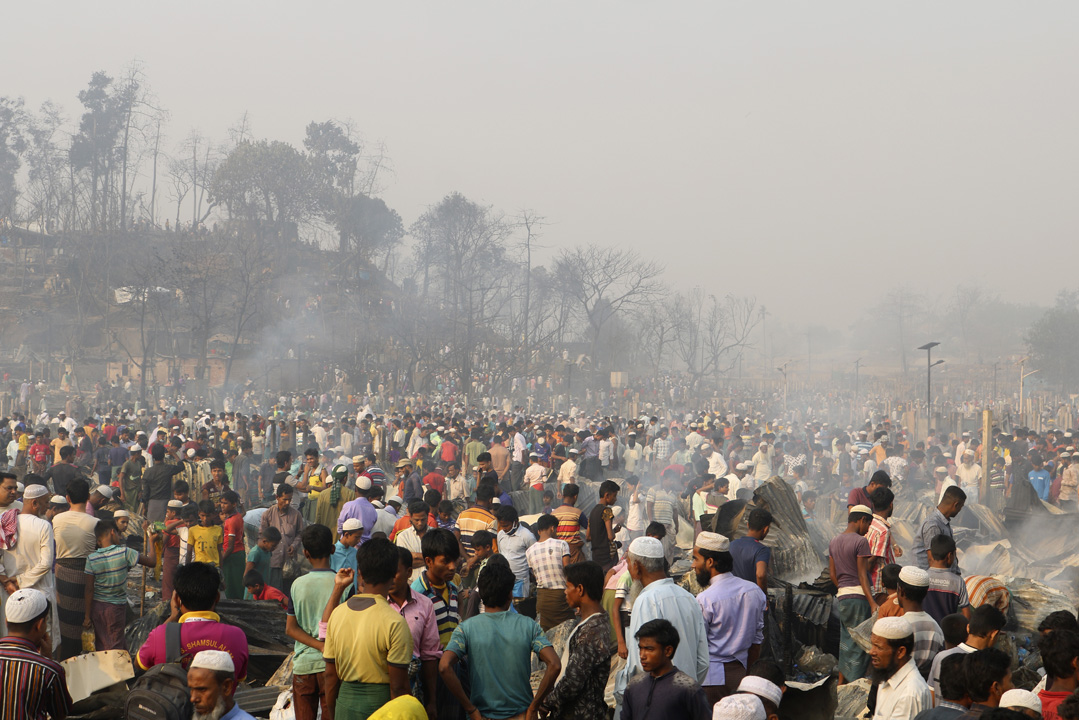 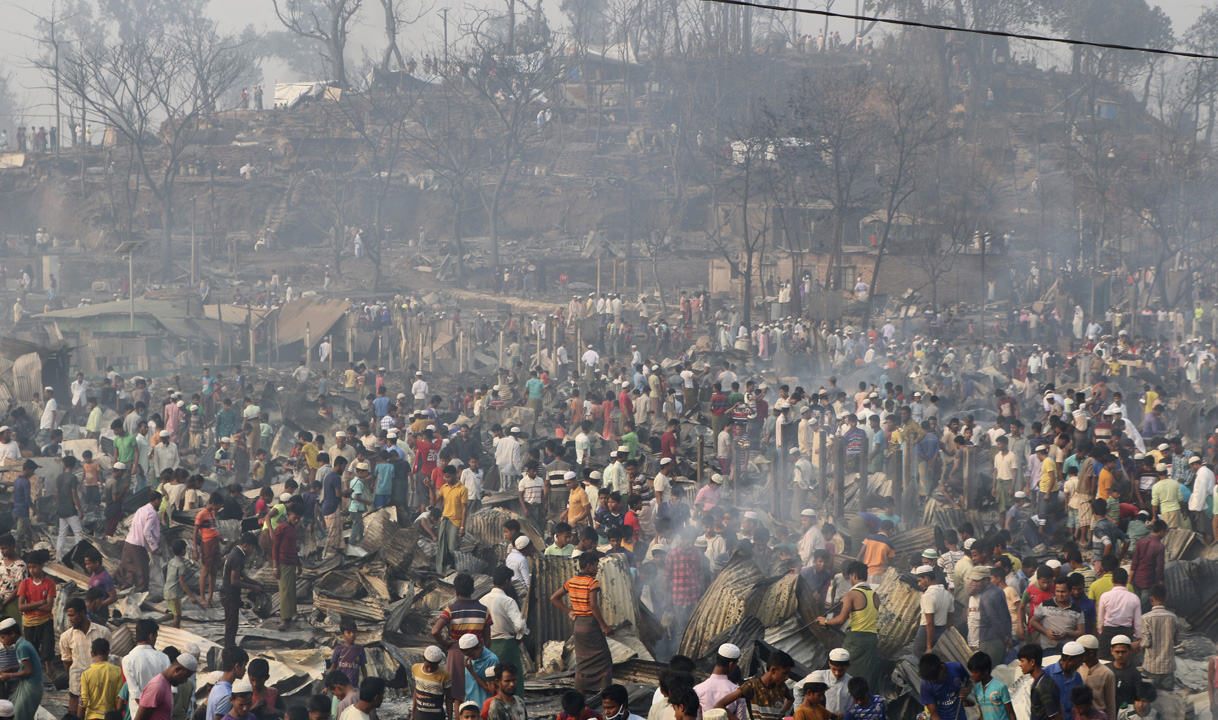 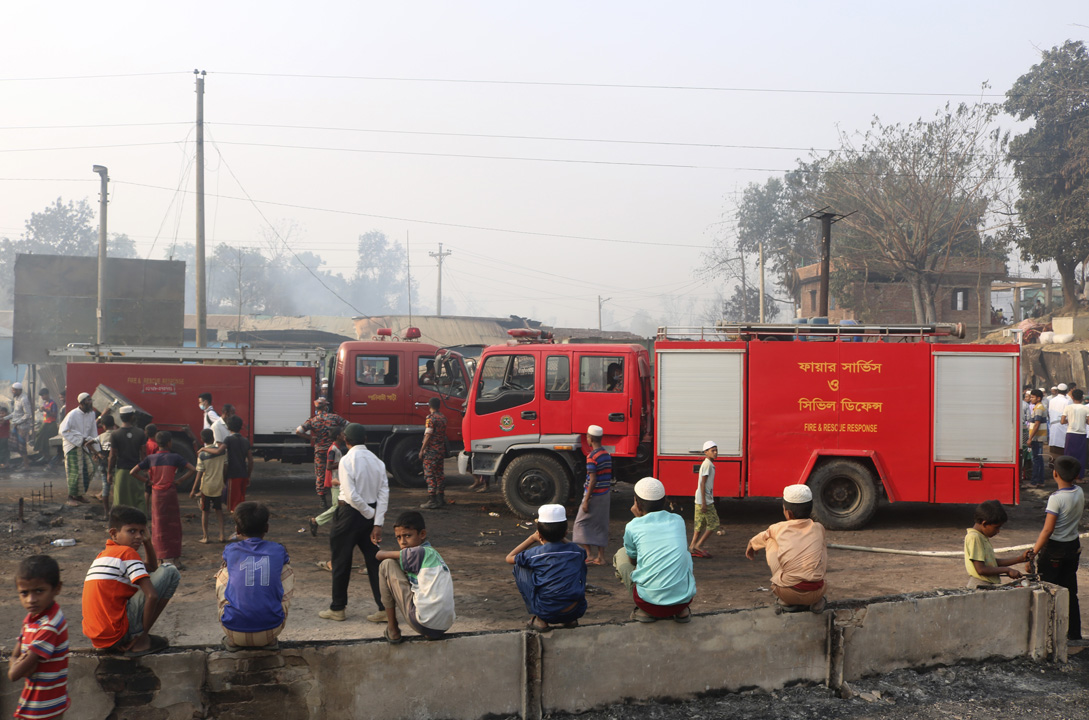 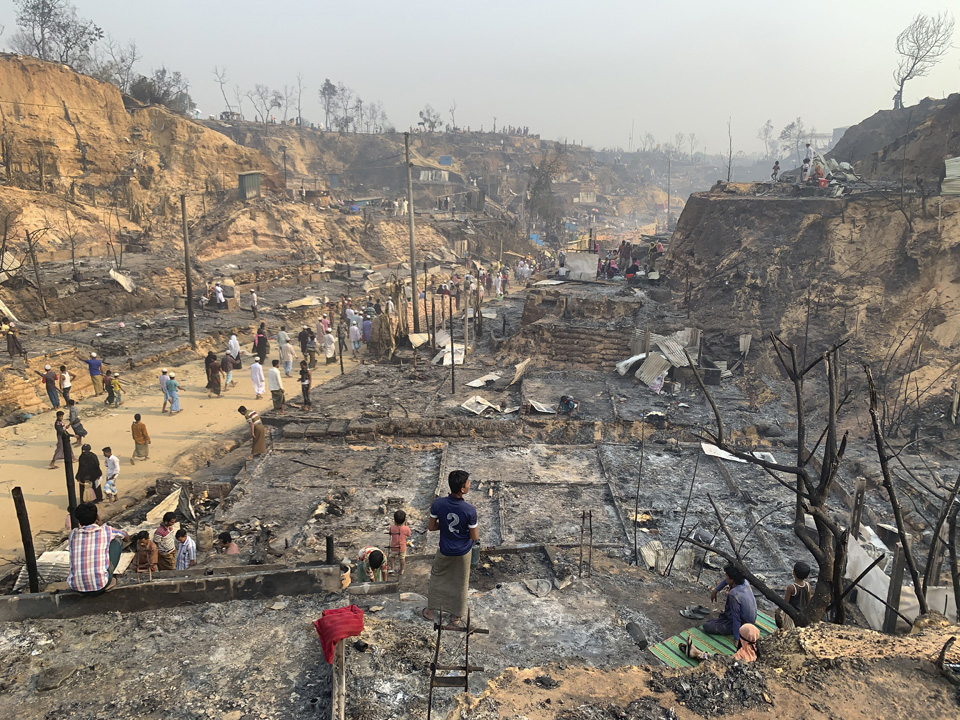 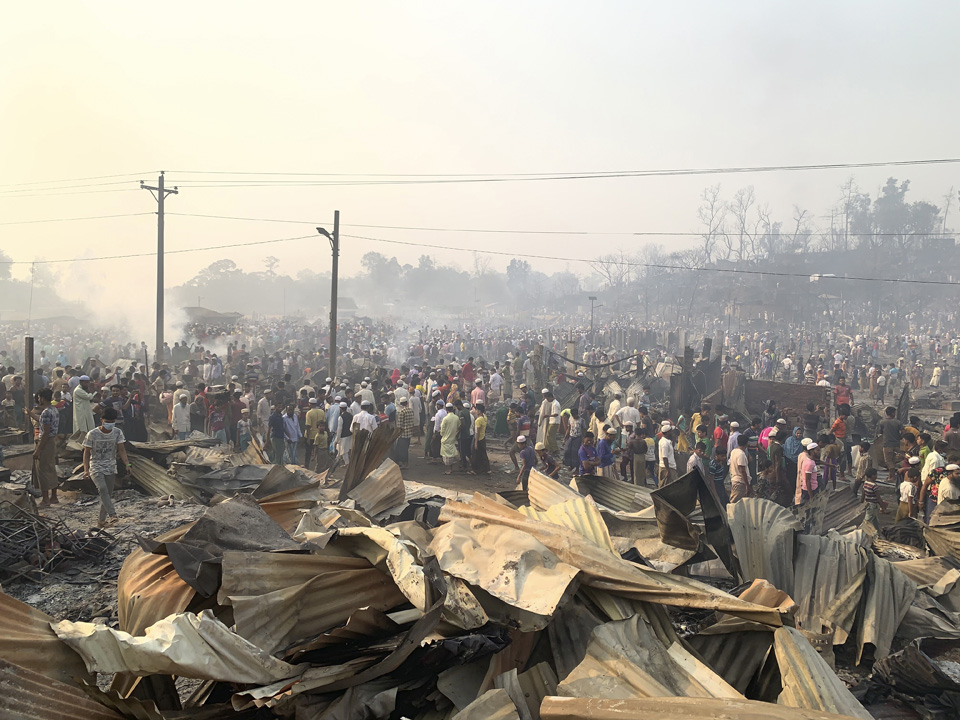 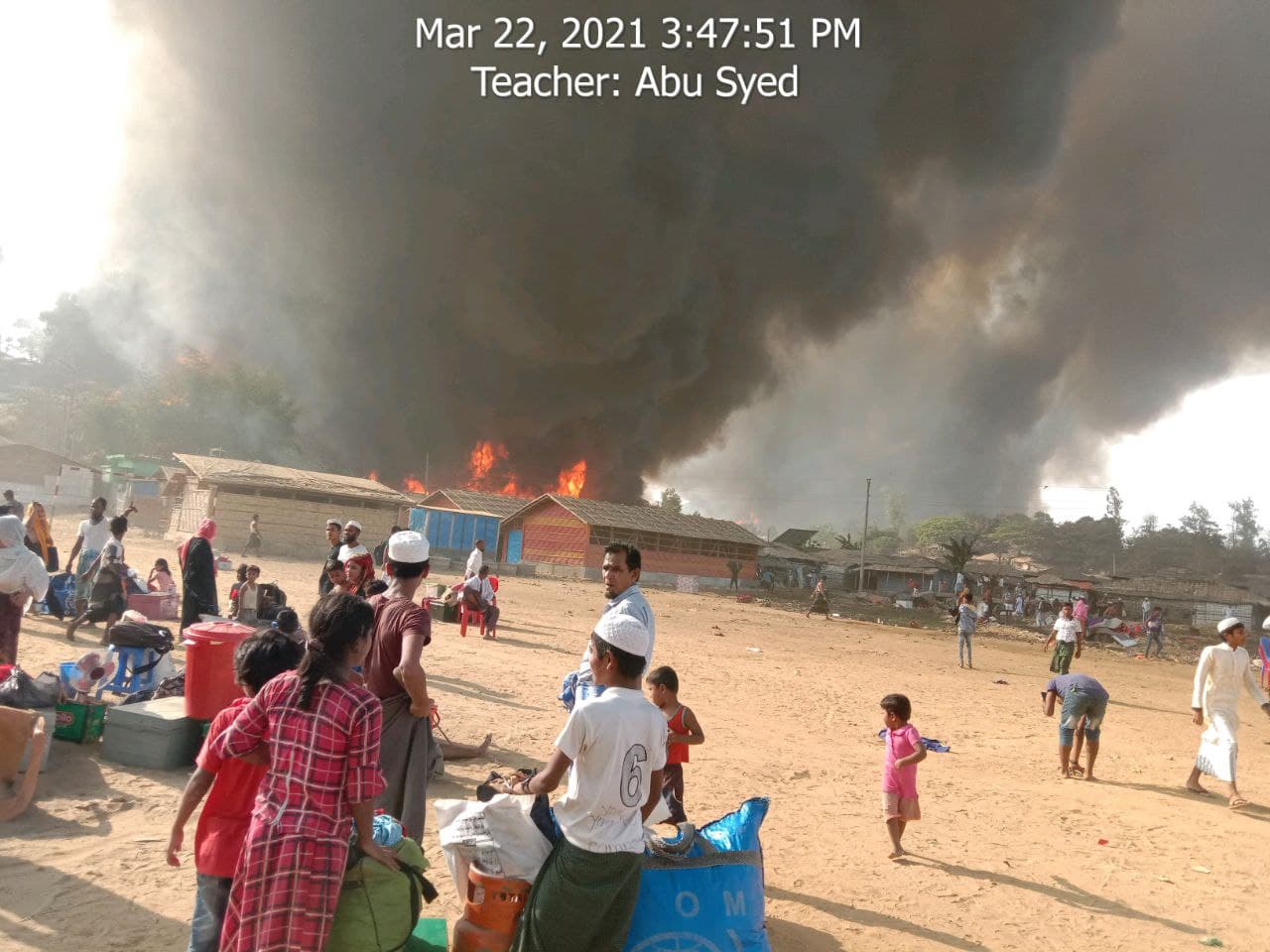 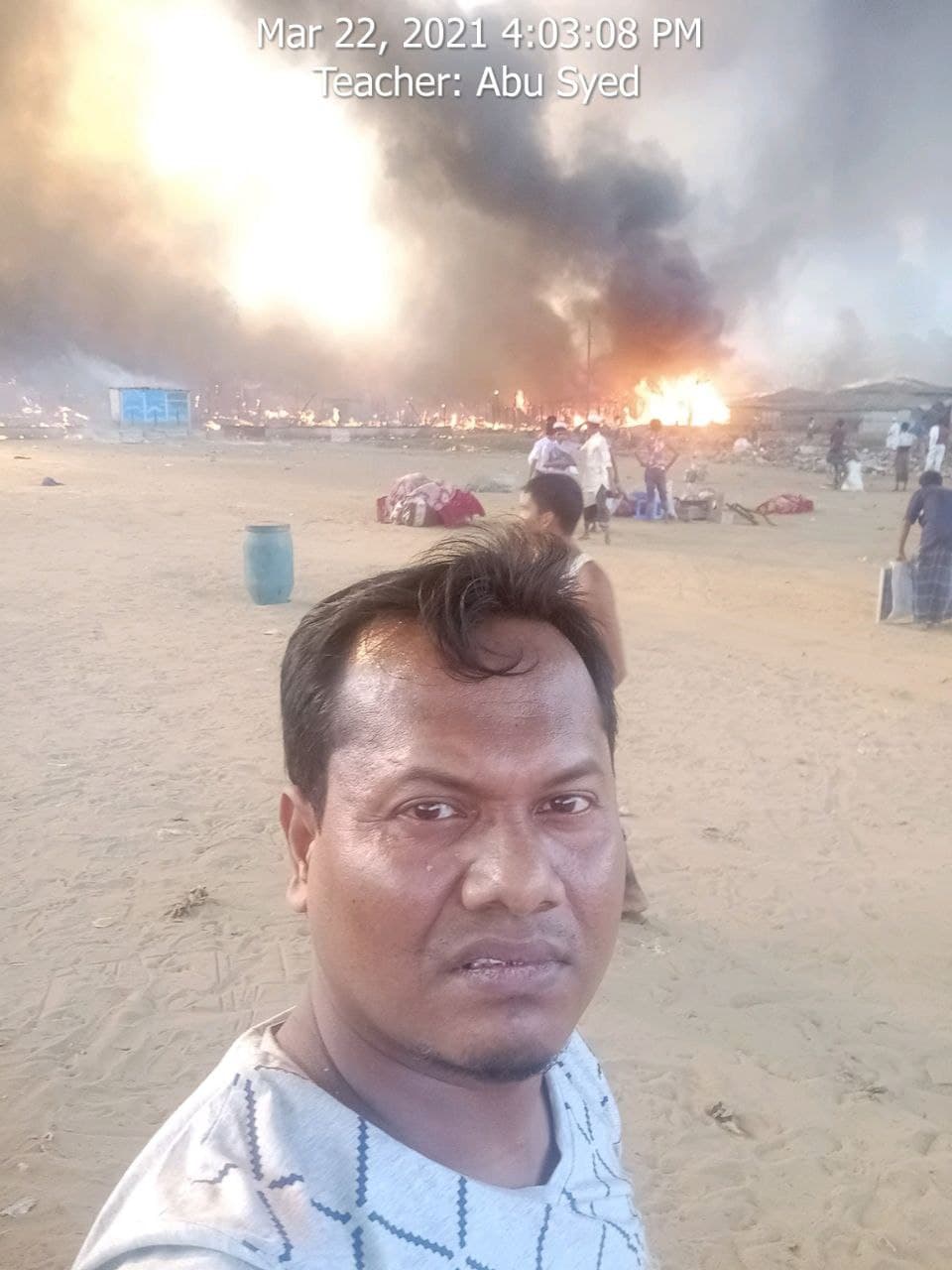 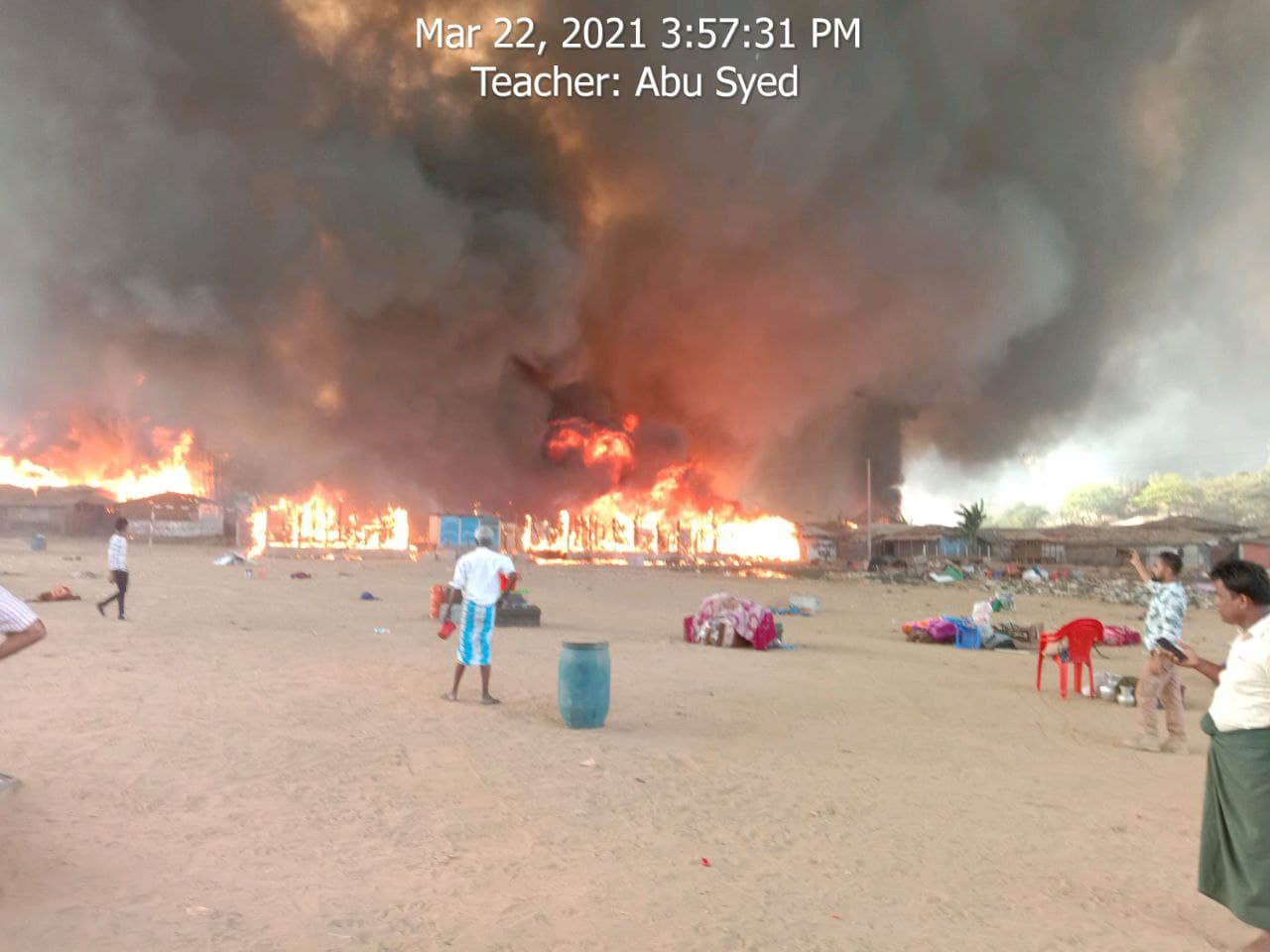 Bangladesh has sheltered more than a million Rohingya Muslims in crowded refugee camps, the vast majority having fled neighboring Myanmar in 2017 amid a major crackdown by that country’s military. The U.N. has said the crackdown had a genocidal intent, a charge Myanmar rejects.

Bangladesh is eager to begin sending the refugees back to Buddhist-majority Myanmar. Several attempts at repatriation under a joint agreement failed because the Rohingya refused to go, fearing more violence in a country that denies them basic rights including citizenship.

The huge fire comes just months ahead of Bangladesh’s monsoon season, when cyclones and heavy rains between June and October batter the region and often lead to floods. In January, another fire destroyed hundreds of shanty-like homes in the camp, leaving thousands without shelter.

A situation report from the U.N. World Food Program said up to 87,855 people were affected by the fire, with many taking refuge in nearby camps, at friends’ shelters, learning centers or temporary transit sites.

The International Federation of Red Cross and Red Crescent Societies said an estimated 123,000 refugees in the camps were affected by the fire.

The differing figures between could not immediately be reconciled.

The federation said more than 1,000 staff and volunteers had worked through the night with firefighters, camp residents and other agencies to rescue people and douse the fire.

“We are providing relief through food and water, and erecting emergency shelters for people who have lost their homes. These devastating fires will require even greater efforts by all agencies in the coming weeks, particularly as the cyclone season approaches,” said M. A. Halim, head of operations in Cox’s Bazar for the Bangladesh Red Crescent Society, in a statement.