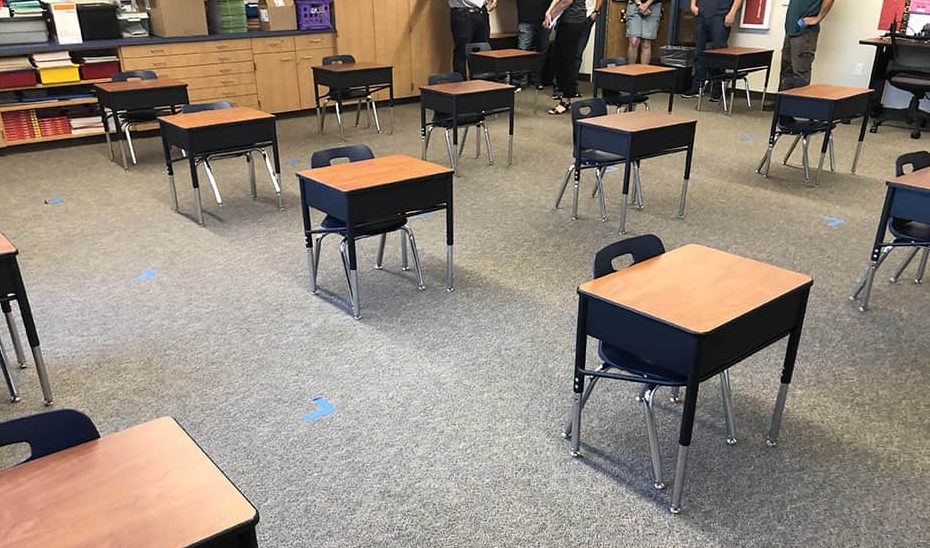 The federal Centers for Disease Control and Prevention announced Friday that desks in elementary schools now may be set 3 feet apart instead of 6 without risking the spread of the coronavirus among students — even in counties like Fresno where the risk of infection remains high.

Desks at middle and high schools should remain at the 6-foot distance until coronavirus infection rates are lower, the CDC is advising.

Students and staff will still need to wear masks and wash their hands frequently, and schools will need to ensure classrooms are properly ventilated and regularly cleaned. But the CDC has determined that plexiglass barriers between desks are unnecessary.

However, schools should continue regular testing, isolation of students and staff after a positive test, and contact tracing, the agency says.

Fresno County Superintendent of Schools Jim Yovino on Friday called the CDC’s announcement a “game changer … it’s the difference between 17 kids and a teacher in a classroom to in most cases bringing back the entire class.”

But the California Department of Public Health will need to update and modify state guidelines to conform with the new CDC advisory, he said.

Fresno County Public Health officials did not immediately respond to a request for comment. Update: Dr. Rais Vohra, the county’s interim health officer, said at Friday’s afternoon’s health briefing for reporters that the California Department of Public Health indicated it would provide a new guidance for schools based on the CDC’s recommendation sometime in the next couple of days.

Back to School After Spring Break

How will this impact local schools? As of Friday morning, Fresno and Central school districts are still hinging the return of students to classes after spring break on Fresno County reaching the red tier in the state’s reopening plan. The county has remained in the purple tier since last fall.

“While the latest CDC information will not change our current schedules for return, it is very encouraging news for the fall as we are making progress towards returning everyone in person,” spokeswoman Sonja Dosti said by email. “In the meantime, we urge our community to remain vigilant in helping to reduce the spread of COVID-19 as Fresno County is still in the purple tier.”

Fresno Unified did not immediately respond to a request for comment. Update: District spokeswoman Vanessa Ramirez said Friday afternoon that the new recommendation has not been yet approved by county health officials, so the district will retain the 6-foot recommendation for now.

After the Fresno County Department of Public Health recently asked districts to propose plans for a 4-foot desk distancing, and after hearing that the CDC might drop the distance to 3 feet, Clovis Unified was already reviewing the impact on current and future school schedules, spokeswoman Kelly Avants said Friday.

Superintendent Eimear O’Farrell told employees on Thursday that the district would carefully consider the potential impacts of narrowing the gap between desks, which could allow more students now on waitlists to join their classmates in school as well as extending the number of minutes students can be on campus each day.

“We will also explore solutions that can be found that minimize or eliminate disruptions to class assignments, bell schedules, transportation, Campus Catering and the other logistical challenges that could also be created,” O’Farrell said in a message to employees. “I know we are all concerned about the academic and emotional wellbeing of our students, and the Board and I feel we owe it to our kids to examine the 4-foot option [and now possibly 3-foot option] from every angle to come up with a decision that works for our staff and students.”

Marcelino Valdez Jr., founder of the Facebook group Parents for Re-Opening Fresno Unified, said he hopes the CDC’s announcement gives impetus to Superintendent Bob Nelson to let kids return to classrooms no matter what the county’s tier color is.

Fresno Unified this week announced the results of a parent survey that showed about 60% of parents want their children back in class on a hybrid schedule, and the remaining want to keep their children on distance learning. The survey was conducted prior to the CDC’s announcement.

Based on the survey results and standard classroom sizes, all elementary students whose parents want them back in classrooms could be accommodated under the 3-foot rule, Valdez said.

And Fresno Unified should not be bound by the negotiated agreement with the Fresno Teachers Association to return to classrooms once the county is in the red tier, he said.

To increase parental response to its survey, Fresno Unified blanketed the community in outreach to parents through media, social media, electronic flyers, emails, texts, and phone calls. Even so, the district did not receive responses from the parents of about 10,000 students by the deadline.

Hmong families are opting to stay on distance learning to keep their children as well as elderly family members from being harmed by the coronavirus, community activist Paula Yang said. In addition, many Hmong families have been successful in adapting to online learning, she said.

If students need to catch up on schoolwork later, that’s preferable to becoming ill and possibly succumbing to COVID-19, Yang said: “If it takes another six months to a year before everyone is vaccinated and we’re safe, the kids will be OK.”

Related Topics:CDCcoronavirusschool desks
Up Next

Should Low-Performing Fresno Charter School Get More Time to Improve?