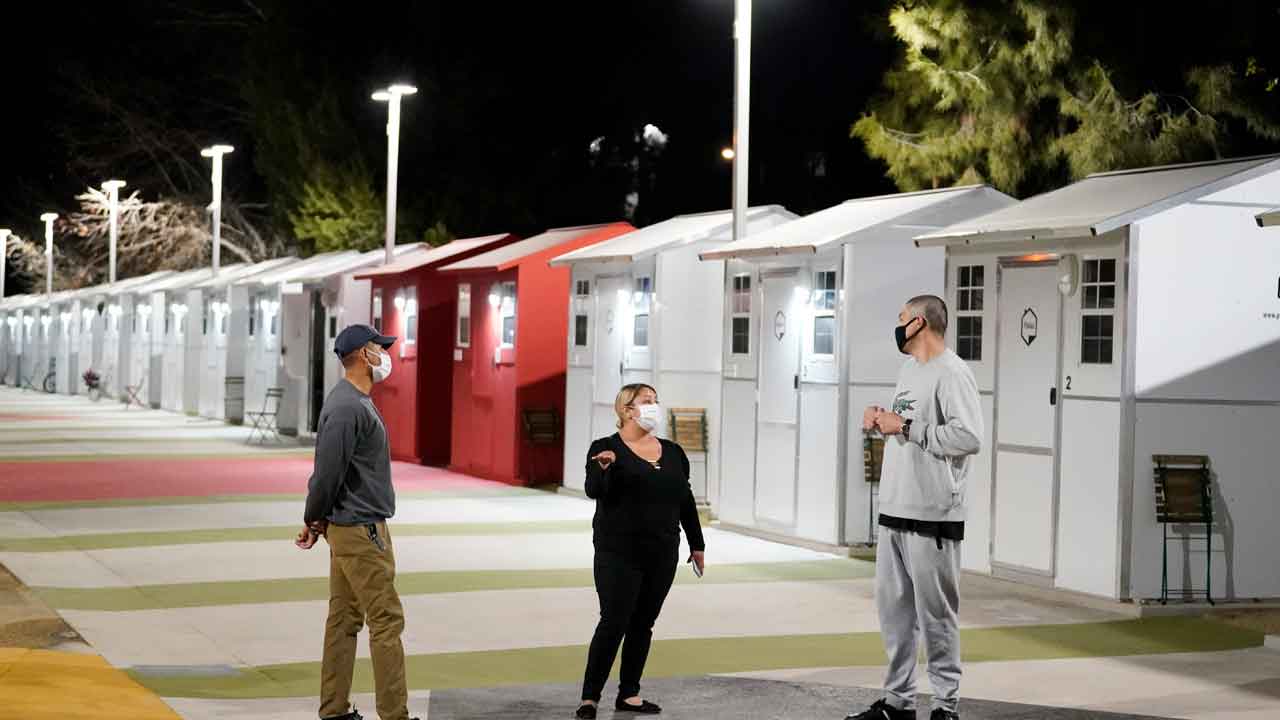 Amy Skinner took notice when brightly colored structures started taking shape earlier this year on a drab patch of asphalt across from a Los Angeles park where she occasionally slept outdoors.

Skinner, who’s been homeless for three years, watched as workers built a fence with a security gate and transformed the city-owned property into LA’s first tiny home village offering interim housing and services for people who lack shelter.

Then in early February, Skinner was handed the keys to one of the 39 prefab units at the one-acre plot in a North Hollywood neighborhood. She and her partner, John Golka, moved into the 64-square-foot (6-square-meter) space with their little dog, Smalls.

It’s cramped but comfortable inside their temporary home — with four windows, two beds, shelving and an A/C unit. The inscription on the welcome mat at the front door captures their new mood: “This is our happy place.”

“Being able to lock the door and have a place to sleep is huge,” Skinner, 48, said after a morning smoke with other new residents in the community’s shared outdoor space. Bright red picnic tables stood nearby and a “hygiene trailer” with toilets and showers was just steps away.

“Just being able to fall asleep! That’s so hard to do when you’re on the streets,” she said.

Tiny homes have been promoted as the solution to all kinds of housing needs — an affordable option in expensive big cities and simplicity for people who want to declutter their lives. They are increasingly used as shelter for homeless people in other California cities, including San Jose and Sacramento, as well as nationally in Seattle, Minneapolis and Des Moines, Iowa.

Chandler Street village was developed and funded by Los Angeles as part of an emergency response to the worsening homelessness crisis. A 2020 tally found there were 66,400 homeless people in Los Angeles County — up more than 12% from the previous year.

More than 150,000 people are homeless statewide. Gov. Gavin Newsom said Tuesday during his State of the State address that he plans to commit $2 billion this year to create more housing for those without shelter, while simultaneously addressing mental health and substance abuse issues.

The pandemic has forced even more residents onto the streets, as congregant shelters cut capacity to maintain social distancing. Meanwhile, a 2016 Los Angeles ballot measure meant to fund as many as 10,000 supportive housing units took too long to ramp up and advocates for the homeless demanded officials act immediately. The city and county began looking for creative, affordable solutions to get people out of the tents that line sidewalks near downtown and under freeway overpasses in suburban areas.

City Councilman Paul Kerkorian, whose district includes North Hollywood, said officials zeroed in on the abandoned, awkwardly shaped slice of land across from the park.

“It was ideally suited for this use and not much else,” Kerkorian said.

The tiny home village had to overcome some “not-in-my-backyard” reactions from nearby residents who needed to be convinced it’s a safe, clean opportunity for shelter, Kerkorian said.

Ken Craft, CEO of the nonprofit Hope of the Valley, which operates Chandler Street, said he asks dubious neighbors if they would rather have a tent encampment or the tiny homes on the land.

“Here we have services,” he said. “”Here people can start to chart a path out of homelessness.”

Counselors at Chandler Street provide mental health treatment, legal aid and assistance with job searches. Skinner is getting her Social Security card, which she hopes is a first step toward full employment.

The homes are red, white and blue with bright yellow pathways between them. The eye-catching colors are intended to avoid an institutional feel and help the village fit into the surrounding area. Kerkorian said the city worked with the builder to circumvent cumbersome zoning rules and finish the village in weeks instead of months.

Units cost $7,500 each, including labor and materials, and were shipped as ready-to-assemble stacks of panels from builder Pallet Shelter in Everett, Washington. The total cost of the project was about $5 million, according to Kerkorian’s office, with the majority spent on re-routing water, power, and sewer lines to the site. Hope of the Valley gets a $55 per person daily reimbursement from the city to cover three meals and social services for residents.

“The primary concern was, can we actually fit all these units on the site? And once we did that. we said, can we make it a little more playful? Can we offer a bit more privacy?” said lead architect Nerin Kadribegovic with Los Angeles-based Lehrer Architects.

Hope of the Valley is constructing two more tiny home villages in North Hollywood, including one with 100 units that will be the largest in California, Craft said. More are planned in other neighborhoods.

Advocates for the homeless applaud the effort, saying every bit of shelter helps amid the deepening crisis. But Pete White, director of the advocacy group Los Angeles Community Action Network, knocks Chandler Street’s units for their bare-bones design, saying they look like “the shed where you keep your lawnmower.”

His group is developing a similar community of slightly larger “micro homes” for homeless people that have in-house kitchens and are environmentally sustainable with solar power and recycled water. The EcoHood pilot program will be funded by donations, said White, who didn’t have cost estimates.

“We know that we can’t build ourselves out of the crisis. But we are learning that you can make progress if you can show that projects like these actually work,” he said.

The goal for Chandler Street residents is to stay a few months and then transition to more permanent housing. Ted Beauregard, one of its first residents, plans to be out by mid-April.

The 63-year-old found himself homeless for the first time when the pandemic ground his fledgling construction contracting business to a halt. “I’m using this as a stepping stone,” he said of his tiny house.

In the meantime, he appreciates having a roof overhead and a place to store his belongings. He admires the construction of his temporary home, which he likens to Army barracks.

“I look at it like I live in a gated community, across from beautiful parkland,” he said, gesturing through the fence toward the green fields across the street.

Costa: Now ‘Not the Time’ for Concern Over Paying for $1.9T Relief Bill