Despite His Popularity, Unique Recall Rules Could Spell Trouble for Newsom 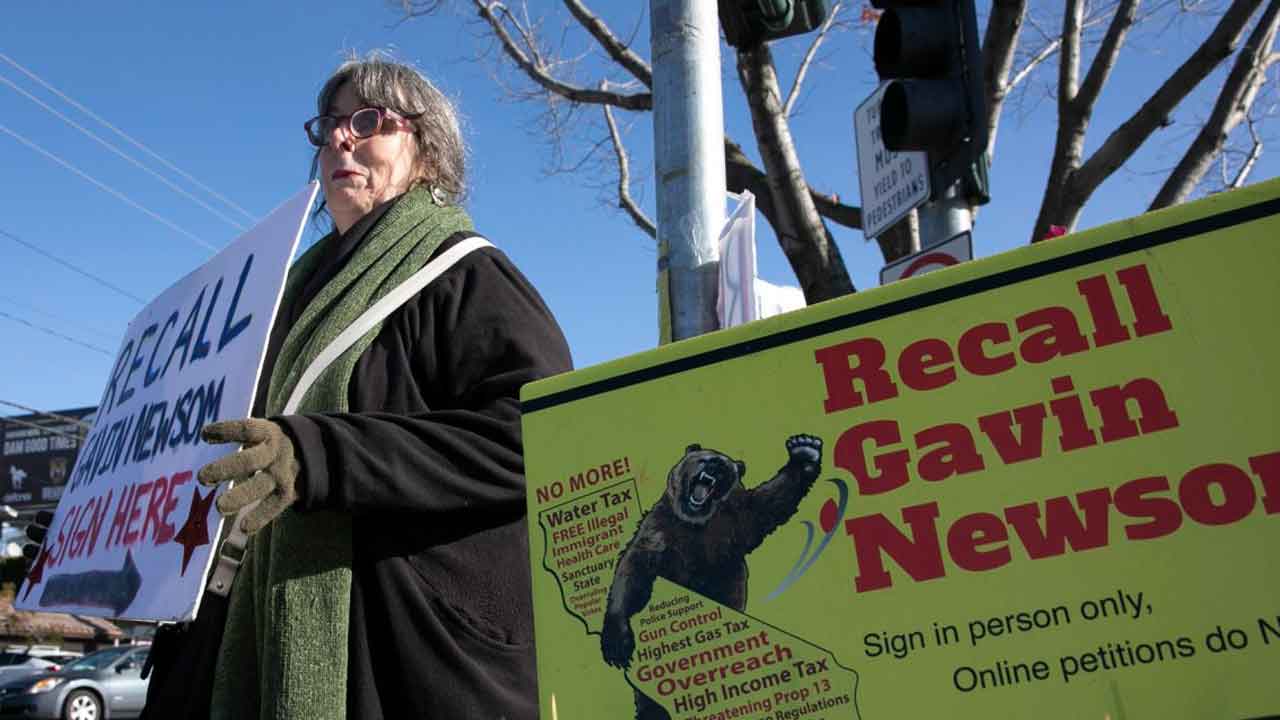 If recalls followed the rules of a normal California election — the person who wins a majority of the votes wins — then Gavin Newsom, the incumbent Democratic governor in a thoroughly Democratic state, would have nothing to worry about.

But unfortunately for him, a California recall is not like an ordinary California election.

“It really is its own animal,” said Ken Miller, a Claremont McKenna political science professor. One part standard-issue candidate race, one part free-spending ballot measure campaign, with a generous dash of political circus, California recalls adhere to a unique — and some critics say, less than fully democratic — procedure that makes for a much more unpredictable outcome.

“Newsom would beat any Republican head-to-head pretty easily,” said Miller. But “because of the way the game is structured, it could be more problematic for him.”

It could also be potentially problematic — or at the very least, puzzling — for the majority of voters. Under the recall rules, Gavin Newsom could conceivably get more support than the top vote-getter in the recall — and still lose his job.

Organizers Say They Have Enough Signatures

At last count, the Republican Party bigwigs, small business groups and irate parents campaigning to oust Newsom from office a year before the end of his first term are just 400,000 valid signatures shy of the nearly 1.5 million total needed to put his political career on the ballot. That was as of early February and they have until March 17 to make up that difference. (Before a recall rally at the state Capitol on Sunday, organizers said they have collected 1.95 million signatures and believe enough will be valid.) Even allies of the governor are now conceding that a recall election is likely late this year.

The odds are still probably in Newsom’s favor. Despite a recent drop in the polls, he remains fairly popular— especially when compared to Gov. Gray Davis, the only California governor to have been successfully ejected from office by recall. And though Californians across the board give Newsom low marks for his handling of the pandemic, voters won’t have the chance to vote in a recall election until the fall, at which point the state’s economic and epidemiological woes may have subsided substantially.

But recall elections can be unpredictable.

A run-of-the-mill election for state office in California follows a predictable two-step. First, every candidate crowds onto a single ballot and voters cast their ballots for whomever they like — regardless of party. Next, the top two winners from the first round go head-to-head in a second and final contest.

That “top-two” set-up ensures that the candidate who wins will have received more than 50% of the vote. The will of the majority rules, guaranteed.

Recall elections offer no such guarantee. Voters are first asked whether they would like to give the incumbent the boot. Then, in a second question, they are asked who ought to be the replacement. Under California law, incumbents can’t run to replace themselves.

If more than 50% of voters opt for a “yes” on the recall question, whoever comes first on the replacement list is immediately hired as the state’s next chief executive. That’s where things can get weird. In a crowded field with no clear frontrunner, coming first could mean getting far less than 50% of the vote.

It might even mean getting far less support than the incumbent being ousted.

That didn’t happen in 2003, the only time a California governor has been successfully recalled. Despite the 135 candidates in the running to replace Gov. Gray Davis, the well-known moderate movie star Arnold Schwarzenegger won 49% of the vote, compared to the less than 45% who wanted to keep Davis. But Schwarzenegger’s star power and bipartisan appeal may make him a political unicorn.

A more recent example shows just how odd California recall math can be.

In 2016, Democratic state Sen. Josh Newman won a seat in a longtime GOP stronghold in north Orange County. In the summer of 2018, Republicans and anti-tax advocates mounted a recall campaign over Newman’s support for an increase in the state gas tax. A fired-up conservative bloc of voters turned out en masse, Democratic voters did not, and Newman was replaced by Republican Ling Ling Chang.

In that race, 66,197 voters, or 42%, opposed the recall and backed Newman. Chang, running against five other candidates, received fewer votes, 50,215, but still won the seat with 34%. In the next regularly scheduled election in 2020, Newman reclaimed the seat.

A sufficiently crowded and disorganized field could produce similar results in a 2021 recall race.

“If the outcome is that Newsom ends up with 49% opposing a recall — so thus supporting him — and whoever wins in question two gets, say, 35%, then Newsom, in theory, had more support,” said Miller.

But in that scenario, Newsom would lose anyway. That’s “a little tricky from a democratic theory perspective,” he added.

From the perspective of Republicans hoping to win a statewide election in California, however, it holds real political promise.

In 2018, Newsom beat his GOP opponent, John Cox, by 24 percentage points, with 62% of the vote. In the last two presidential elections, the Democratic candidates — Hillary Clinton and Joe Biden — raked in nearly two votes for every one earned by Donald Trump. A Republican hasn’t won a statewide election here since 2006.

So far, two prominent Republicans — Cox and former San Diego mayor Kevin Faulconer — have challenged the governor. Richard Grenell, a Trump ally and former U.S. ambassador to Germany, is publicly flirting with the idea of jumping in too. At the California Republican Party’s virtual convention last month, support for the recall was one of the few unifying principles.

“No governor in California’s history is more deserving of a recall, and we’re going to give it to him,” party chairperson Jessica Patterson said in a speech to the GOP delegates.

Though the recall is clearly written into the state constitution, some Democrats see the current effort as, at best, a sign of desperation and at worst, a circumvention of popular will.

Earlier this year, California Democratic Party chairperson Rusty Hicks likened the recall effort to a “coup” — a statement he later walked back after widespread criticism.

“The fact is that, all things being equal, (Republicans) can’t win a Democrat-versus-Republican statewide race, because they haven’t done so in 15 years,” said Garry South, who managed the unsuccessful Davis campaign to avoid a recall. “What route is left to them? Recalls.”

Democrats tried a version of that argument in 2003.

“They couldn’t beat him fair and square, so now they’re trying another trick to remove him from office,” read the governor’s official response listed in the recall petition. “We should not waste scarce taxpayers’ dollars on sour grapes.”

Though recalls for state office are relatively rare, this particular election procedure has been having a moment in recent years. According to data collected by the National Conference of State Legislatures, of the 42 recall campaigns against state officeholders that qualified for the ballot, 18 of them, or 46%, popped up since 2010.

That trend could be due to the advent of social media, which makes it easier to publicize these efforts, the national wave of anti-incumbent feeling epitomized by the Tea Party and Occupy Wall Street movements, or mere political faddism.

But Seth Masket, director of the Center on American Politics at the University of Denver, said the rising tide of recalls is yet another product of our highly polarized political environment.

“Almost all of the states are basically one-party government…The minority party in those states just sees fewer opportunities to influence the legislature or influence politics,” he said. “The recall is an outlet in that situation.”

For the GOP in California, the recall is “probably the only way” to the governor’s mansion, he added.

California is one of 19 states that give voters the ability to fire their elected officials in snap elections. But in 17 of them, the incumbent being ousted is either allowed to run to keep the seat or is simply replaced by another state official. The California model is only shared by Colorado.

That raises a new set of strategic headaches for California’s Democratic Party. Should the party focus its money and sloganeering on opposing the recall? Or should it run a Democrat on the replacement list — an insurance policy in case the recall succeeds — at the risk of muddying its message backing Newsom?

In 2003, then-Lt. Gov. Cruz Bustamante opted for option two, announcing at the last minute that he would run to replace his ostensible political ally Davis. The campaign slogan was muddy indeed: “No on Recall; Yes on Bustamante.”

Asked about the party’s strategy earlier this year, party chairperson Hicks declined to offer specifics, simply saying that “anything and everything is on the table.” Newsom, himself, has also had little to say on the subject.

State Sen. Ben Allen, a Democrat from Santa Monica, is hoping to update the state’s recall law. Inspired by the ouster of Newman in Orange County, for two years now he has introduced a proposal that would allow an incumbent subject to a recall to run among the list of potential replacements.

“We should have a system where, at the very least, on the day of the recall, the candidate who gets the most votes actually gets the seat,” he told CalMatters earlier this year. “The current system is undemocratic.”

But as an amendment to the state constitution, Allen’s proposed change would first have to receive support from a supermajority of both the state Assembly and Senate. Then it would go before the voters at the next regularly scheduled election in 2022.

And that would be too late to help Newsom.

Ben Christopher covers California politics and elections for CalMatters. Prior to that, he was a contributing writer for CalMatters reporting on the state’s economy and budget.